Minnesota Attorney General Keith Ellison on Wednesday added a second-degree murder charge to the counts against ex-Minneapolis police officer Derek Chauvin in the killing of George Floyd. He also charged the three other officers fired in the incident.

“The investigation is ongoing. We are following the path of all the evidence, wherever it leads,” Ellison told reporters as he announced the charges and pleaded with the public for patience in the probe.

“Winning a conviction will be hard,” he cautioned. “We’re confident in what we’re doing, but history does show there are clear challenges” in convicting police officers for murder, he said.

He said the effort would take months but “I can’t set a deadline on that.”

Chauvin was initially charged by Hennepin County prosecutors with third-degree murder and second-degree manslaughter in Floyd’s killing while in police custody last week. Chauvin was the officer seen in bystander video pressing his knee against a prone, handcuffed Floyd as the man pleaded for air.

The attorney general also filed aiding and abetting charges against the other three ex-Minneapolis officers — Thomas Lane, Tou Thao and J. Alexander Kueng. Authorities expect all three to be in custody this afternoon.

Floyd family attorney Ben Crump called it a “a bittersweet moment” and said the family was “deeply gratified” by the news of the upgraded and additional charges. He had initially pressed for a first-degree murder charge.

Ellison said that first-degree murder in Minnesota requires pre-meditation. Chauvin’s second-degree murder charge involves unintentional killing while committing a felony. Ellison said in this case the felony was an assault on Floyd.

“We believe these are the right charges,” he said.

Check back for more reporting.

On Wednesday morning, Gov. Tim Walz made an unannounced visit to the south Minneapolis intersection where Floyd was killed while in police custody.

The governor spoke to CNN, saying he was trying to be respectful as a white politician talking in a place so raw for people of color.

“I don’t think we get another chance to fix this in the country. I really don’t. I don’t think that’s hyperbole,” Walz said of the societal rifts exposed anew by the killing of Floyd. “Being at the heart of this and seeing the community’s pain so viscerally, this is going to have to be that change we look for.”

CNN is reporting that Minnesota Attorney General Keith Ellison, who’s taken over the case, is expected to provide an update Wednesday afternoon.

Walz’s visit to Chicago Avenue and 38th Street came a day after his human rights commissioner launched a broad investigation into the Minneapolis Police Department in the wake of Floyd’s killing, which sparked more than a week of protests across the nation calling for the United States to address structural racism and inequality, including violence and discrimination by police.

The probe of Minneapolis police will scrutinize the last decade of the city’s policing — including policies, procedure, training and practices — looking for patterns of discrimination against people of color. Human Rights Commissioner Rebecca Lucero said she would seek quick changes in the department while examining long-term structural problems.

Among the changes needed are an overhaul of the state police licensing board, subpoena power for civilian review boards and a set of “integrity standards” for officers where they can be fired for not telling the truth, said Justin Terrell, executive director of the Council for Minnesotans of African Heritage.

He dismissed the idea that police problems are the result of a few bad apples. “We often hear the rotten apple example. We’re dealing with a cancer. This is what’s going on with law enforcement right now,” Terrell said.

He said he found it frustrating to discover officers tied to the Floyd case had histories of complaints against them.

"It makes no sense that you would continue to give someone with that many complaints a badge and a gun to patrol my neighborhood,” Terrell said. “Send them to your neighborhood if you have that much faith in them.”

The investigation is a way to transform policing in Minnesota so a killing like Floyd’s won’t happen again, said state leaders, including Gov. Tim Walz.

"This window of opportunity opened. … It won't stay open for long,” Walz said, vowing that the effort won’t end in a report tossed on a dusty shelf.

John Harrington, the public safety commissioner and former St. Paul police chief and officer, said he supported the review and that policing needed to return to its community roots.

Minneapolis Mayor Jacob Frey said he supported the investigation into his Police Department.

ACLU sues over treatment of reporters during protests

The American Civil Liberties Union is suing the city of Minneapolis and the Minnesota State Patrol over law enforcement's treatment of journalists covering recent protests.

The ACLU is seeking a temporary restraining order in federal court to stop what it calls "an extraordinary escalation of unlawful force deliberately targeting reporters."

"The press are under assault in our city and we've seen numerous documented incidences of deliberate abuse against journalists by law enforcement officers, and that has to stop," said Teresa Nelson, legal director for the Minnesota chapter of the ACLU.

The lawsuit was filed on behalf of a freelance journalist who was hit in the face with a projectile. Nelson said other journalists covering the protests have been tear gassed, hit with rubber bullets and arrested, even though they were carrying press credentials and identified themselves as journalists. 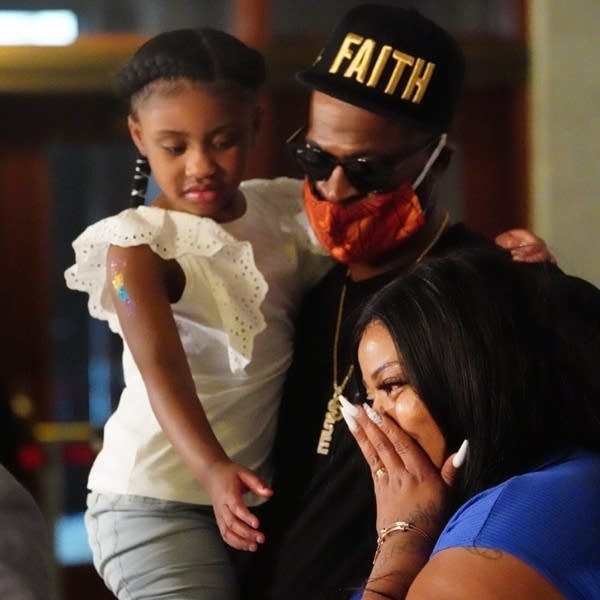 Roxie Washington, the mother of Floyd’s daughter, spoke through tears at a news conference on Tuesday, calling for justice in his killing.

“I want everybody to know that this is what those officers took. … I want justice for him. No matter what anyone thinks, he was good. And this is the proof he was a good man,” she said, motioning toward her 6-year-old daughter.

Floyd was born in North Carolina but spent most of his life in Houston, where Washington is from. She said that Floyd loved his daughter and kept a connection with her after he moved to the Twin Cities several years ago.

A private memorial service for Floyd is set for Thursday at North Central University in Minneapolis. The Rev. Al Sharpton will deliver the eulogy, and other family members plan to speak.

A university representative reiterated Wednesday that the service is invitation-only and not open to the public.

Another night of curfew, calmer protests

Earlier this week, Walz announced a pullback in National Guard operations. Maj. Gen. Jon Jensen, head of the Minnesota National Guard, confirmed the Guard will begin pulling back some of the 7,000 members currently mobilized but cautioned “this is not an order to return the entire organization back home” and that it could be reversed if situations warrant.

To read more of this story and related reporting, follow this link to the MPR News website.  https://www.mprnews.org/story/2020/06/03/state-will-investigate-minneapolis-police-in-wake-of-floyds...