Minnesota’s death toll from the coronavirus neared 1,000 on Thursday as health officials said they are expecting a spike in cases stemming from massive protests in Minneapolis and St. Paul over the death of George Floyd.

Health Commissioner Jan Malcolm said that while she understands the pain and anger people are feeling over Floyd’s death while in Minneapolis police custody and respects their desire to protest, she’s concerned that people gathering in the streets are at risk of getting the virus and transmitting it.

“I’m understanding the forecast is for very large protests this weekend, with a lot of people coming in from across the state and around the country and gathering in large groups,” she said. “That’s almost sure to have an impact on furthering spread.”

Malcolm reiterated her plea for people to wear masks and socially distance but acknowledged doing those things will be very difficult in the situation that’s playing out in Minneapolis and St. Paul. 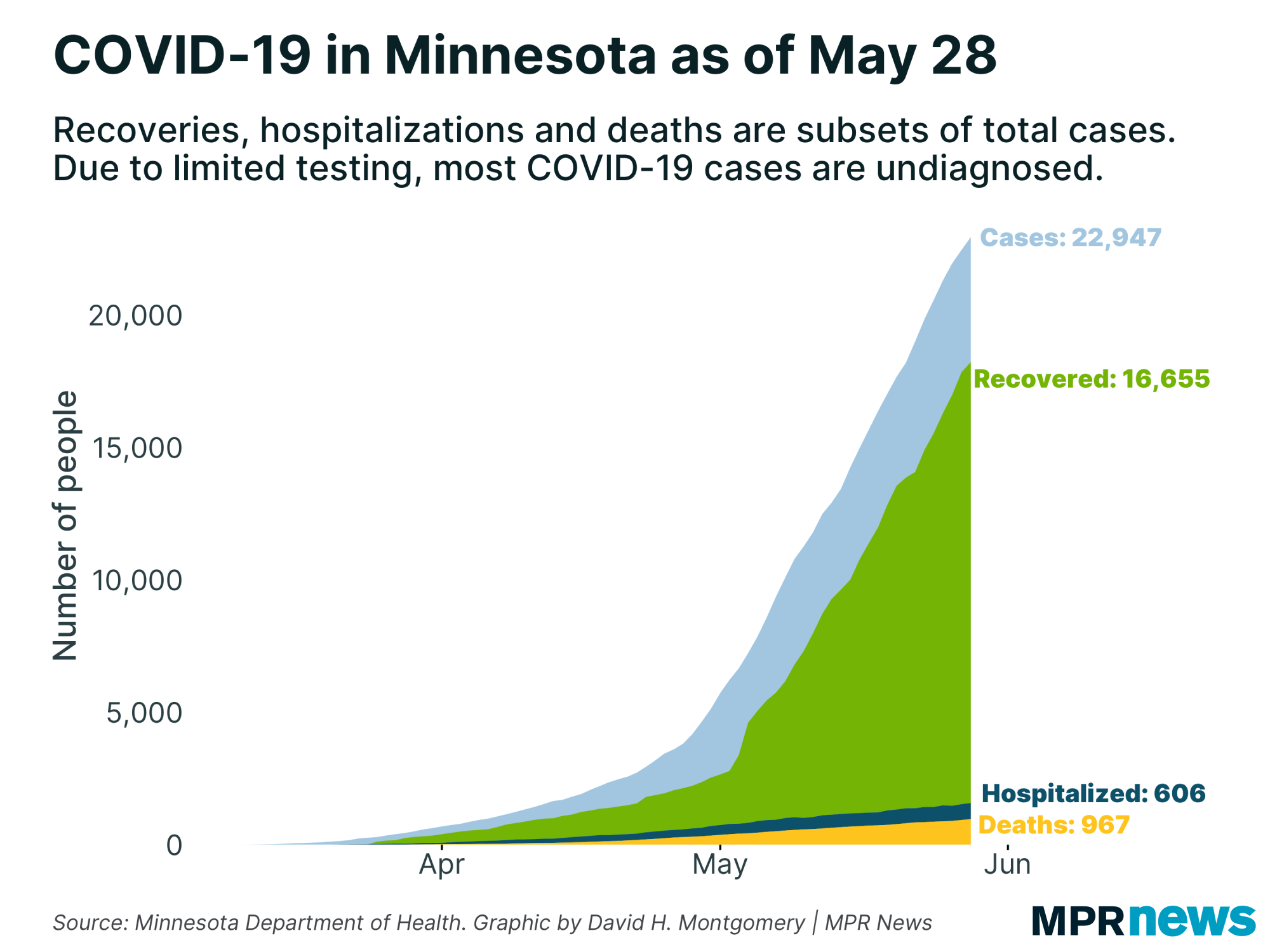 They’ve said Minnesota’s two-month stay-at-home order helped buy time for the state to secure supplies and prepare for the expected surge in hospitalizations and ICU cases, which had been climbing this week.

Malcolm recently noted that intensive care beds were filling up in the Twin Cities metro area. Officials said Tuesday that 87 percent of ICU beds in the metro area are now in use, much of that from COVID-19 cases, while other regions in the state still had available capacity.

Malcolm and other leaders continued to implore Minnesotans to stay vigilant and take the disease seriously. Counts of total cases — 22,947 as of Thursday — and deaths continue to climb even as Minnesota loosens more restrictions, potentially opening the door to greater community spread.

Asked whether she was happy so far with the state's “battle plan” strategy to stop the spread of the virus in long-term care facilities, Malcolm said there are some emerging bright spots in the numbers.

She said a few facilities have no cases at all, and roughly half that do have cases have only one or two. And, over half of those facilities no longer have any cases.

In the larger facilities that have had a lot of cases, Malcolm said a third of them have had no new cases in a week.

"That, too, is a measure of success,” she said, “How well are facilities able to manage cases and how good a job are we doing in supporting them in doing that."

Malcolm acknowledged that the number of deaths in long-term care facilities is unacceptably high, but also suggested that Minnesota may be posting higher numbers in this area because the state is counting these deaths differently from other states.

In southwestern Minnesota’s Nobles County, where an outbreak hit Worthington’s massive JBS pork plant, about 1 in 15 people have tested positive for COVID-19. In mid-April, there were just a handful of cases. By Thursday, there were 1,496 confirmed cases, although the numbers are rising at a much slower rate than in previous weeks.

Similar problems have been reported in Stearns County, where COVID-19 cases tied to two packing plants — Pilgrim’s Pride poultry plant in Cold Spring and Jennie-O Turkey in Melrose — have skyrocketed.

An undisclosed number of workers at both plants have tested positive for the virus. There were about 55 confirmed cases in Stearns County two weeks ago. By Thursday, confirmed cases were at 1,995 with 12 deaths.

In other counties, however, case counts are climbing rapidly. Todd County, in central Minnesota, has seen the number of confirmed cases leap from just a few at the start of the month to nearly 300 as of Thursday.

The Minnesota Supreme Court has set deadlines for submitting information related to a recall petition of Gov. Tim Walz.

A petition filed last week with 32 Minnesota voter signatures seeks to remove Walz from office over his handling of the coronavirus pandemic. It says Walz exceeded his powers and infringed on rights with restrictions he imposed. Justices say they want supporting evidence in hand by Friday.

The governor’s defenders have until Tuesday to make a counter-case. In Minnesota, there is a high bar for a recall of elected officials.

A coalition of businesses that challenged Minnesota coronavirus restrictions have suffered a legal setback.

The state Court of Appeals dismissed the lawsuit filed by the Free Minnesota Small Business Coalition, which challenged orders imposed by Gov. Tim Walz. The appeals court said it lacked jurisdiction to review the validity of the Walz orders.

The groups had challenged them on equal protection grounds and said Walz exceeded his authority with the curbs on business activity.

Another lawsuit is pending in federal court.

Pandemic disruptions taking a toll on farmers' mental health: Plant backlogs caused by the pandemic are forcing farmers to destroy their products instead of shipping them to market. The situation is heaping more stress on farmers.

Pandemic pushes more people into insurance market: As people lose jobs, they and their dependents typically also lose health insurance. Most Minnesotans get their health care insurance at work. It adds up to hundreds of thousands of people facing a loss or interruption in coverage.

To read the original article and see related COVID-19 reporting, follow this link to the MPR News website.  https://www.mprnews.org/story/2020/05/28/latest-on-covid19-in-mn