'Elusive once in a lifetime fish': Fishing guide encounters massive sturgeon on Lake of the Woods Coel Forsyth is the founder of Tight Line Guide Service in Kenora Ont., where he caught a rare black sturgeon while fishing for largemouth bass on Lake of the Woods. Photo: Submitted by Coel Forsyth

A  fishing guide in Kenora Ont., had the catch of the lifetime while on the hunt for largemouth bass on Lake of The Woods last week.

What started off as a slow day ended with a surprise when Coel Forsyth's fishing line started to "go sideways." At first he thought he had caught a six-pound largemouth, then he saw the large body of a fish making its way to the surface of the water.

"So the next thing I thought was maybe a muskie, I've never seen muskies in a lake before but there's always rumours that they're there, or a giant pike. But I kind of got closer and soon realized it wasn't either," Forsyth explained.

'My knees were definitely shaking when I saw this thing'

The catch of the day turned out to be a nearly 200 pound black sturgeon, a fish that is rare to find in Kenora's Lake of the Woods area.

In under 30 minutes, Forsyth had "the largest freshwater fish" he had ever seen to shore, where he could carefully release the fish. He received help from his girlfriend and a friendly "cottager" nearby.

"My knees were definitely shaking when I saw this thing," Forsyth said. "There's realistically no possible way I would have caught it if I hadn't had... the heaviest setup you could have for bass fishing. So if I was fishing with any spinning set there's zero chance I would ever caught that fish."

He described the fish as being rough like sandpaper but slimy, and it appeared to have "battle scars" from its estimated 100-year lifespan. 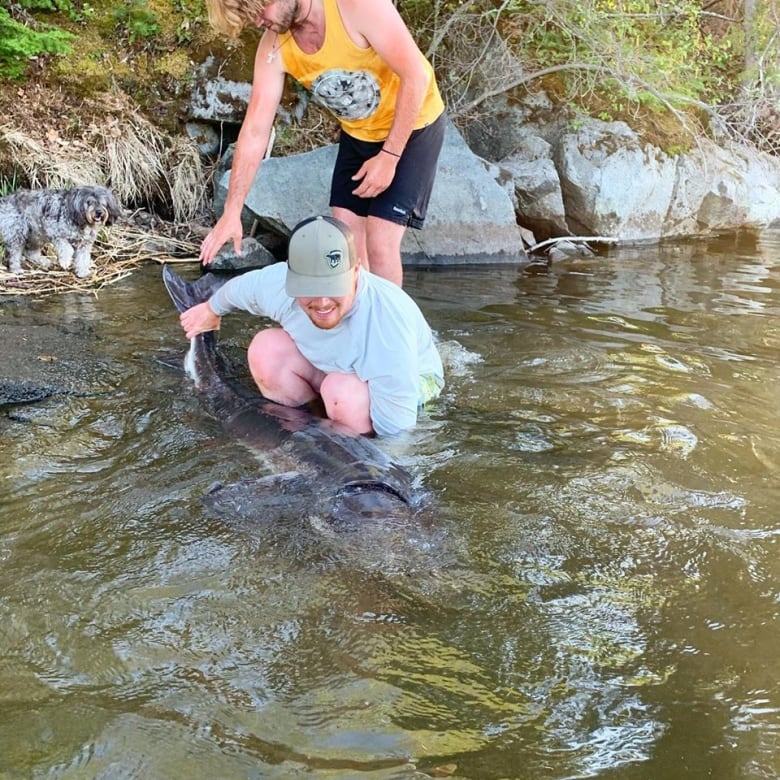 Coel Forsyth, his girlfriend, and a cottager near by worked to release the nearly 200 pound fish back into Lake of the Woods. Photo: Submitted by Coel Forsyth

"His head was probably twice the size of my head."

Forsyth said he couldn't get his arms around the whole body of the fish, and guessed that it was about 200 pounds.

"It's kind of funny when you put it into terms of like people you know, like my grandparents, it's probably older than my grandparents so it was kind of neat to be able to see it and put my hands on it. It had some history," he said.

Forsyth got a good look at the fish, but was quick to send it on its way, as he didn't want to "stress out" the freshwater wonder any longer.

"A fish of that size when they're fighting for too long, build-up lactic acid can be kind of detrimental to the health and safety of the fish. So I tried to turn him around as quickly as possible and kind of set him back on his way," he said while recounting the experience.

"The sturgeon are protected year round. I wasn't targeting him, you can't take them out of the water legally," he explained.

Forsyth said he's not sure how much guiding he will get to do this summer due to the COVID-19 pandemic, but added that the "elusive once in a lifetime fish" experience might be a lucky start to the season.

"It was certainly a cherry on top for the summer and hasn't even really begun."

To read the original story and see related outdoors reporting, follow this link to the CBC News website.  https://www.cbc.ca/news/canada/thunder-bay/kenora-fishing-guide-encounters-sturgeon-1.5582714