A marquee at the Minnesota State Fairgrounds offers encouraging words on April 11, 2020. State Fair officials on Friday announced the 2020 fair could not go on because of the potential public health risk. Photo: Christine T. Nguyen | MPR News file

The tug of war between public health and the desire for normalcy in the COVID-19 era was on full display Friday as Minnesotans mourned the State Fair’s cancellation and debated the relative risk of large religious gatherings. Meanwhile, the disease claimed 33 more lives.

State health officials continued to plead with Minnesotans to stay vigilant against the virus — wearing masks in public and social distancing — and reiterated that people without symptoms can unknowingly spread COVID-19, putting others in danger.

“There are those among us who will not do well with this virus and who will develop severe disease,” Dr. Ruth Lynfield, the state’s epidemiologist told reporters. “It’s not high tech. We know what to do to prevent transmission.”

Her comments came hours after the Health Department reported COVID-19’s escalating toll — 842 deaths, 534 people are currently hospitalized with 233 in intensive care, a new daily high in the pandemic.

Health Commissioner Jan Malcolm said some hospital intensive care units in the Twin Cities metro area were filling now to the point where they are within 5 percent of normal capacity.

Some of that is due to the steady rise of COVID-19 cases while others are due to the resumption of nonelective surgeries. The state has said it could add surge capacity quickly.

“When we know we have community spread,” she said, “it is common sense to do everything that we can to protect each other.”

Minutes after those Health Department numbers were released Friday morning, State Fair officials announced the 2020 Great Minnesota Get-Together could not go on because of the potential public health risk from the disease.

"We all love the fair and that's exactly why we can't have a fair this year,” said Jerry Hammer, the fair’s general manager.

The event has been canceled before, most recently in 1946 because of a polio epidemic. This year, state health leaders have worried over the prospect of hundreds of thousands of Minnesotans packed in at the fair amid the COVID-19 pandemic.

State officials had expressed skepticism about holding the 12-day event, which more than 2 million people attended last year. In April, Gov. Tim Walz said he had a hard time seeing the fair operating this year.

Fair officials had been telling vendors and participants that they expected to make a final decision far in advance to allow food stands, attractions and exhibitors enough time to plan appropriately.

On Friday, Hammer said the board had heard feedback from fair fans along the lines of, let the healthy people go. “That's not who we are and that's not what we do,” he said. “It's got to be accessible to everybody. And a significant number of folks have some sort of health risk, some sort of compromised health.”

Agricultural exhibitors and entertainers on the nationwide fair circuit already were calling off their appearances, and even without safety concerns a fair this summer would not have looked as it has in recent years, he added.

Malcolm said she did not make a recommendation to fair leaders but did lay out the risks. As hard as it was to cancel, the fair “would have been a pretty predictable accelerator of community spread” she said Friday.

"No way around it, it's just another sad indication of the disruption and the loss,” she added. “It's certainly a huge loss to the people's livelihoods are tied to the fair and it is a cultural loss."

Earlier in the week, Gov. Tim Walz unveiled cautious steps to restart parts of the state’s hard-hit restaurant and bar industry in the COVID-19 era. But it was not the plan those businesses were looking for.

Walz announced that bars and eateries could start to serve sit-down customers beginning June 1 — but only at outdoor tables. He stopped short of letting customers sit inside barrooms, restaurant dining rooms or other indoor tables for now.

And while he loosened other curbs on barbershops and other personal services, he would not put dates to when vital parts of daily life in Minnesota could resume, including indoor religious gatherings of more than 10. 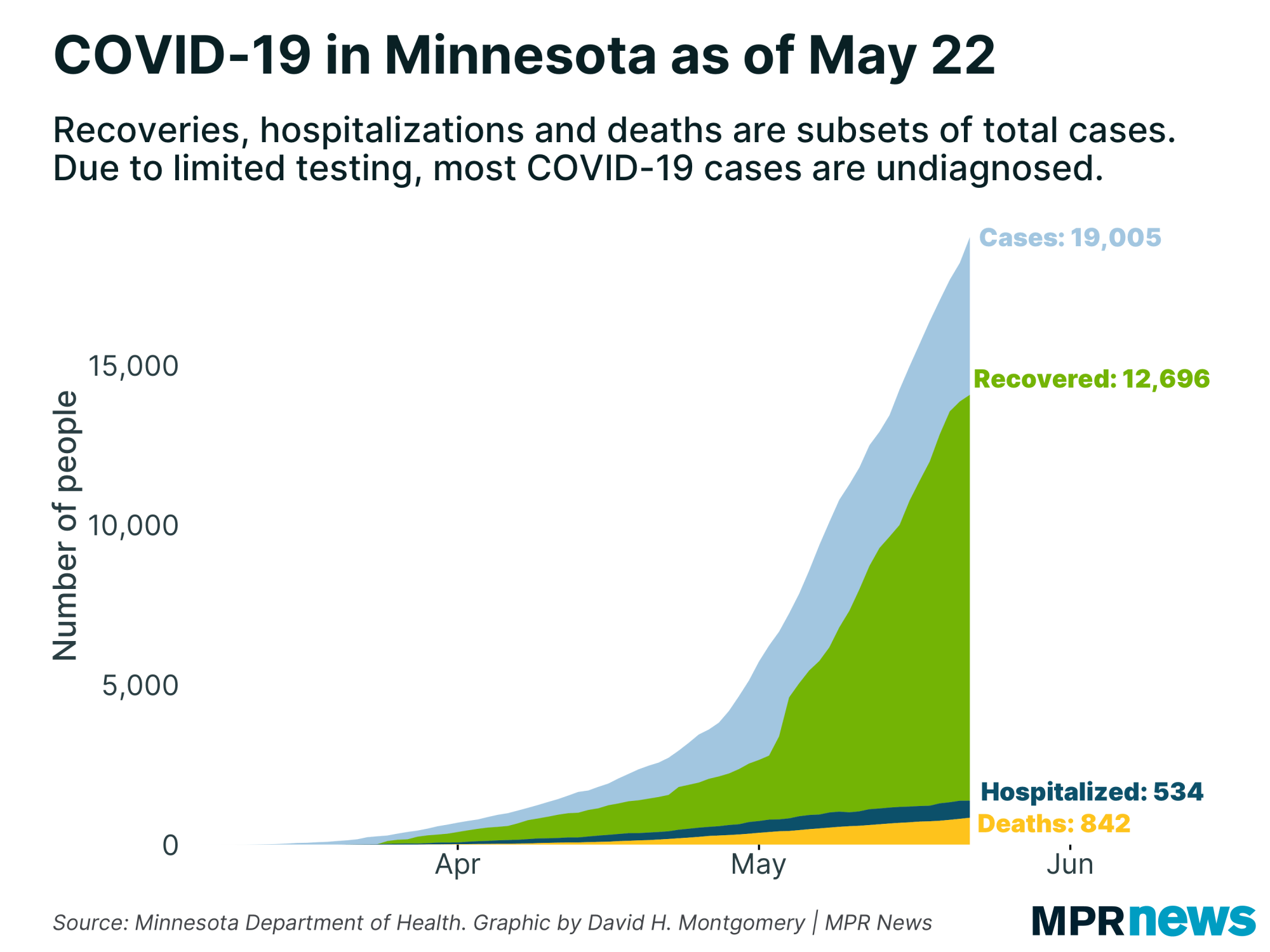 Walz’s moves led to pushback on several fronts. A key hospitality group called the bar and restaurant plan disastrous for an industry already reeling from the economic fallout of COVID-19. GOP leaders also attacked the decision.

The state’s Catholic Church leaders, as well as Lutheran leaders from Wisconsin and Missouri synods, said they would defy Walz’s order and resume services next week, believing they could do so safely.

Later in the day a Walz spokesperson said the governor had talked with local faith leaders and that would study the new guidance from the federal Centers for Disease Control and Prevention “to better understand what this means for places of worship in Minnesota.”

Kris Ehresmann, the state’s infectious disease director, said Thursday that the concern at worship services — including where she worships — is for medically vulnerable people who might be infected. Those at-risk people would naturally want to attend services but “what may seem to be OK for a certain segment of the population could have devastating consequences for others.”

In southwestern Minnesota’s Nobles County, where an outbreak hit Worthington’s massive JBS pork plant, about 1 in 15 people have tested positive for COVID-19. In mid-April, there were just a handful of cases. By Friday, there were 1,432 confirmed cases, although the numbers are rising at a much slower rate than in previous weeks. 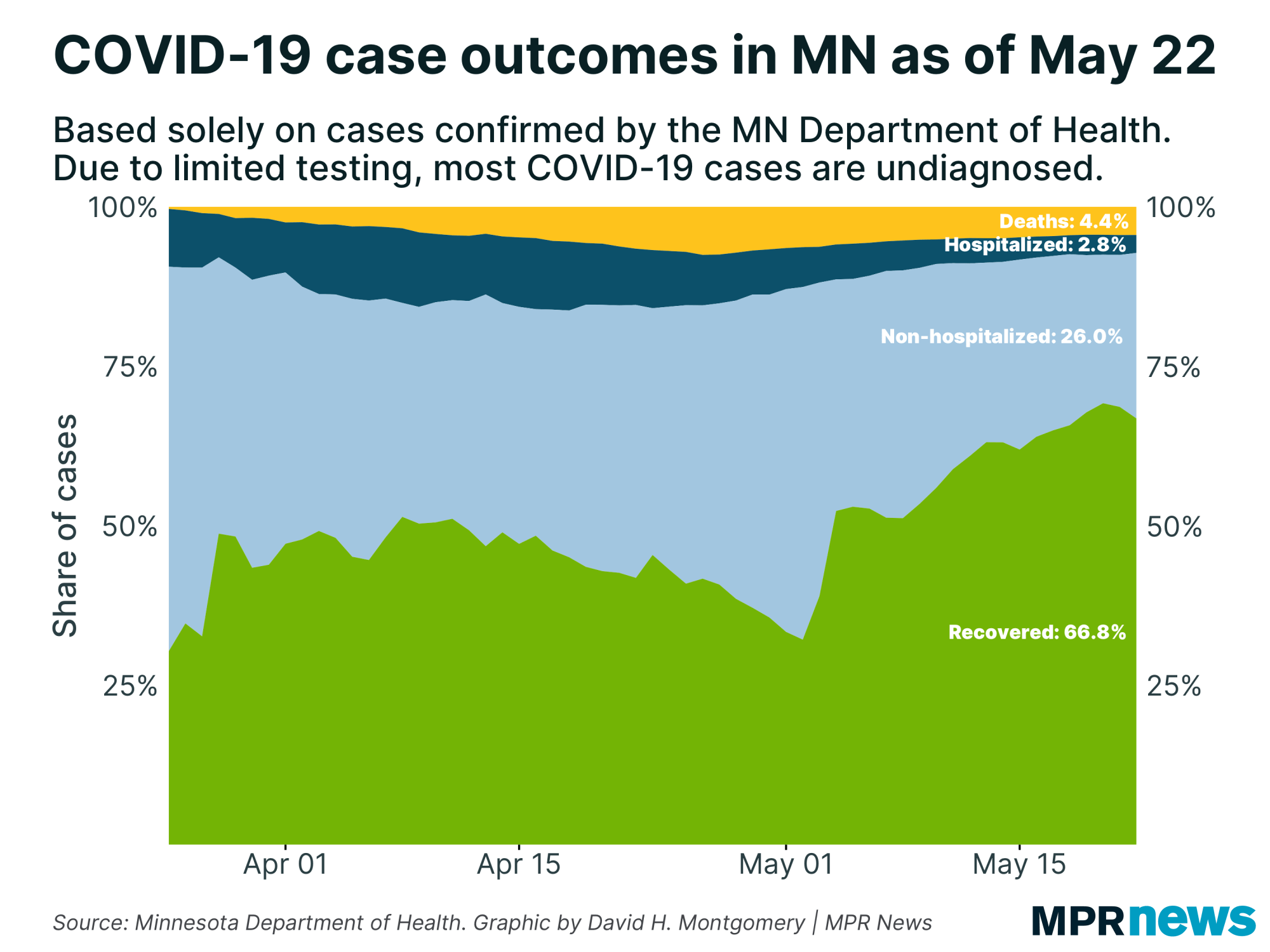 Kandiyohi County in west-central Minnesota is also seeing cases continue to climb a month after officials with the Jennie-O turkey processing plant there said some employees had tested positive for the coronavirus. The county had confirmed three COVID-19 cases then.

The governor’s office on Friday said the Health Department together with the National Guard will offer free COVID-19 testing for any Minnesotan who wants it.

The state set up six National Guard Armory locations across Minnesota throughout the Memorial Day holiday weekend, including St. Paul, Minneapolis, Moorhead, Duluth, Faribault and St. James. They'll be open to conduct testing from Saturday through Monday from 10 a.m. to 5 p.m. daily, or until supplies are exhausted.

No appointment is necessary. Minnesotans will not be asked for insurance cards or ID. Results will be provided by phone within about 48 hours.

Officials said the sites will be able to collect roughly 2,000 samples per day across six sites, for a total capacity of roughly 6,000 tests over the three-day weekend.

Starting next week, people in indoor public places in Minneapolis will be required to wear a face covering.

Mayor Jacob Frey announced the measure on Thursday as the latest in a series of emergency regulations designed to halt the spread of COVID-19. The regulation will take effect next Tuesday.

Frey said business owners will be able to refuse entry to anyone who's not wearing a face covering. The rule would apply to indoor public places in Minneapolis, not outdoor venues.

People can call 311 to report noncompliance, the mayor said. Violations could be punished by fines up to $1,000.

"We are not criminalizing forgetfulness. We are not penalizing people for a lack of awareness. We are approaching the implementation of the policy with grace and patience,” said Frey. “We are prioritizing outreach and education."

On Friday, Frey said that the city has purchased more than 9,000 cloth masks with money from the budgets for council members and the mayor's office. More masks are needed, however, especially in light of the new emergency regulation, Frey said.

The mayor encouraged people to take part in a Memorial Day mask drive, during which people can drop off donated masks at fire stations across Minneapolis.

Minnesota's unemployment rate more than doubled in April to about 8 percent.

A survey of employers found Minnesota lost an estimated 360,000 private sector jobs in April, compared with the same month a year ago.

“Almost half of those jobs were lost in leisure and hospitality and other services, which includes personal services, all of the hair dressers and barbershops that were shut down,” said Oriane Casale, interim director of the DEED’s Labor Market Information Office.

Duluth-based Essentia Health is laying off 900 workers — about 6 percent of its workforce — as it deals with continued economic fallout from the COVID-19 pandemic.

Essentia's East Market president Jon Pryor said the company has lost nearly $100 million since March because of a 40 percent drop in patient volumes.

"Even with the recent ability to restart elective surgery, though that helped, we were still losing tens of millions of dollars a month. And so that was just not sustainable.” Pryor said. “We need to survive so that we can take care of people during the surge and take care of our community post-COVID[-19]."

Pryor said most of the job cuts are not involved in direct patient care. Essentia has furloughed an additional 850 employees, and intends to call them back to work as needed. Physicians and management have also taken pay cuts.

Pryor said that's not enough to make up for such a steep loss of revenue, however.

"We are not thinking of any additional layoffs at this point. However, it's definitely possible. And the reason is, is that this still doesn't close the gap,” Pryor said.

The health system is the largest employer in Duluth, with more than 14,000 workers across Minnesota, Wisconsin and North Dakota.

Efforts aim to share COVID-19 info, help in St. Cloud's Somali-speaking community: As the number of cases of COVID-19 in the St. Cloud area continues to climb, an effort is underway to reach out to the region’s Somali American community with information and assistance.

It was hailed as the 'Minnesota moonshot' — but why hasn’t antibody testing taken off? One reason state health officials say they have been reticent to suggest widespread testing is reliability. In addition to the Mayo and U of M tests, private companies have also developed their own antibody testing. State officials say there are tests on the market that don’t produce reliable results.

More Minnesotans flocking to food shelves: As more Minnesotans lose their jobs because of COVID-19, local food shelves are seeing a surge in first-time visitors needing emergency food services — and the demand doesn’t look like it’ll let up anytime soon. About 1 in 3 Minnesotans say they’re worried about affording groceries and healthy food.

Meet the Minnesota scientists trying to track COVID-19 spread — through sewage: Two University of Minnesota researchers are looking for the virus in wastewater — even before test results reveal its presence in a community.