Shoppers walk through at Rosedale Center, which reopened Monday, May 18, 2020 in Roseville. Twenty of the 120 stores at the mall were reopened on the first day under the new "Stay Safe Minnesota" order. More stores are expected to reopen throughout the week. Photo: Christine T. Nguyen | MPR News

COVID-19 deaths, case counts and hospitalizations continued to climb Tuesday. The state Health Department reported 748 Minnesotans have now died from the disease, up 17 from Monday.

Current hospitalizations jumped to 545, while the count of those needing intensive care held steady at 229. Total cases in the state since the pandemic began reached 17,029.

The newest numbers come as officials prepare to unveil a phase-in plan that would allow people back into bars, restaurants and other public gathering places. That plan is set to be released Wednesday.

Even as they inch the state back toward normalcy — the state’s two-month stay-at-home order came to an end Monday — officials continue to implore Minnesotans to wear masks outdoors and keep their distance from others. 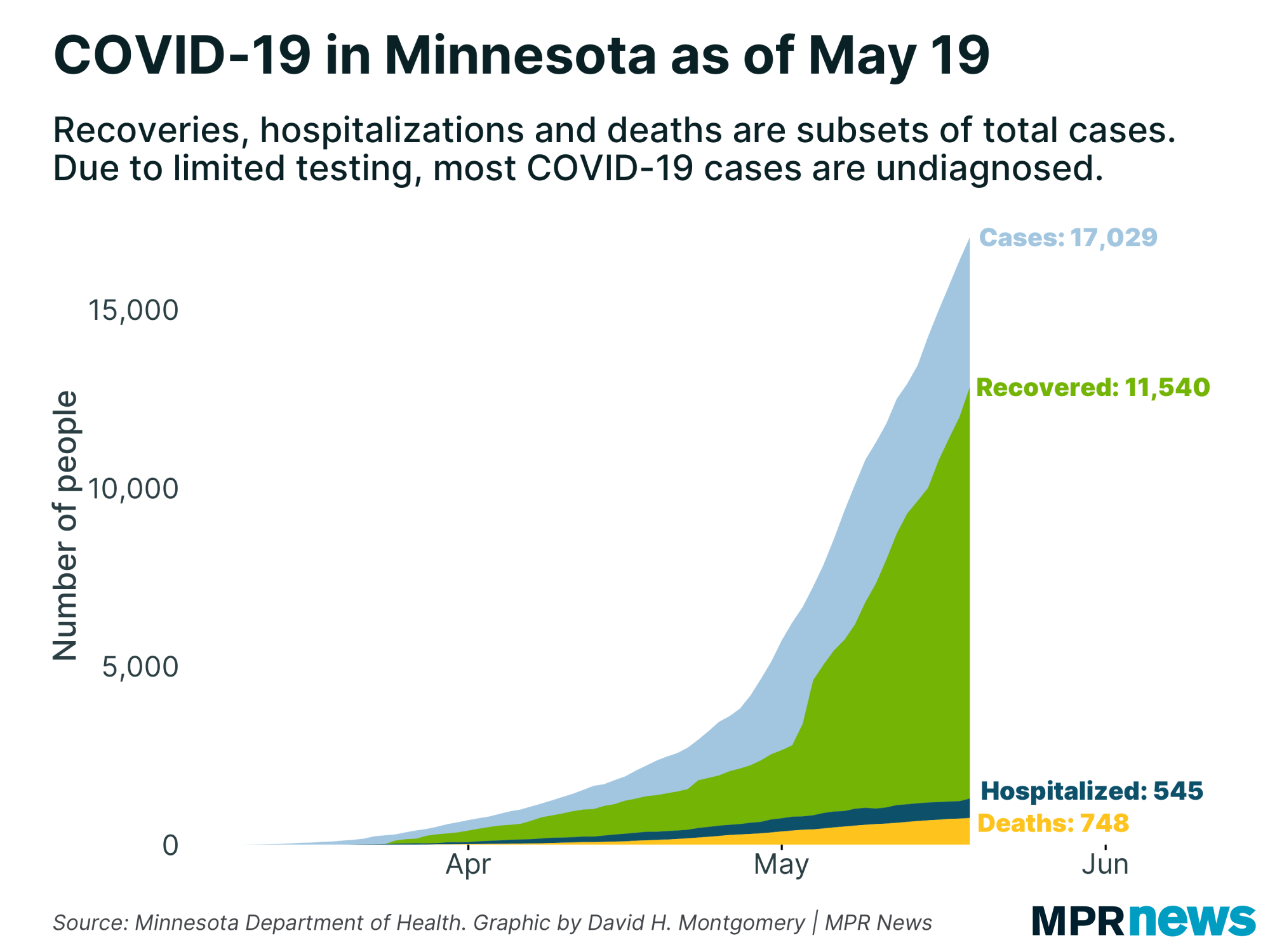 Walz has said he won’t hesitate to pull back on business reopenings if coronavirus cases shoot up and hospitals come under strain. But there are signs emerging that the pace of the disease may not overwhelm the health system, something that’s been one of the governor’s biggest fears.

Health Commissioner Jan Malcolm on Tuesday noted that the time it now takes for case counts to double is stretching out longer — about 13 days currently — helping to make the spread of the disease more manageable.

Tuesday statistics also showed more than two-thirds of the Minnesotans who’ve tested positive for the disease during the pandemic have recovered to the point they no longer need to be isolated.

Health officials say they’re watching several key metrics to gauge if the disease is accelerating as restrictions are lowered. Among them: the number of days it takes for cases to double, the amount of daily testing, the proportion of positive tests and the level of community spread that can’t be traced to specific contacts — an indication the disease might be more widespread.

Even as that tracing work intensifies, it’s possible that many who became infected may never know the source of the infection given that people with no symptoms can have the coronavirus and unknowingly pass it on.

Despite the investigation and tracing efforts, “not everyone is going to be able to say ‘I got it from Fred’ or ‘I got it from Frieda,’” said Kris Ehresmann, the state’s infectious disease director. “For many situations, you may not know where you picked it up.”

While the numbers of positive tests and hot spots for the disease are spread across sectors and regions of Minnesota, more than 80 percent of those who’ve died from the disease were living in long-term care, nearly all had underlying health problems.

On Tuesday, Malcolm said health leaders were focused on eight counties outside the Twin Cities metro area where outbreaks were centered around packing plants.

In southwestern Minnesota’s Nobles County, where an outbreak hit Worthington’s massive JBS pork plant, about 1 in 16 people have tested positive for COVID-19. In mid-April, there were just a handful of cases. By Tuesday, there were 1,394 confirmed cases, although the numbers are rising at a much slower rate than in previous weeks. 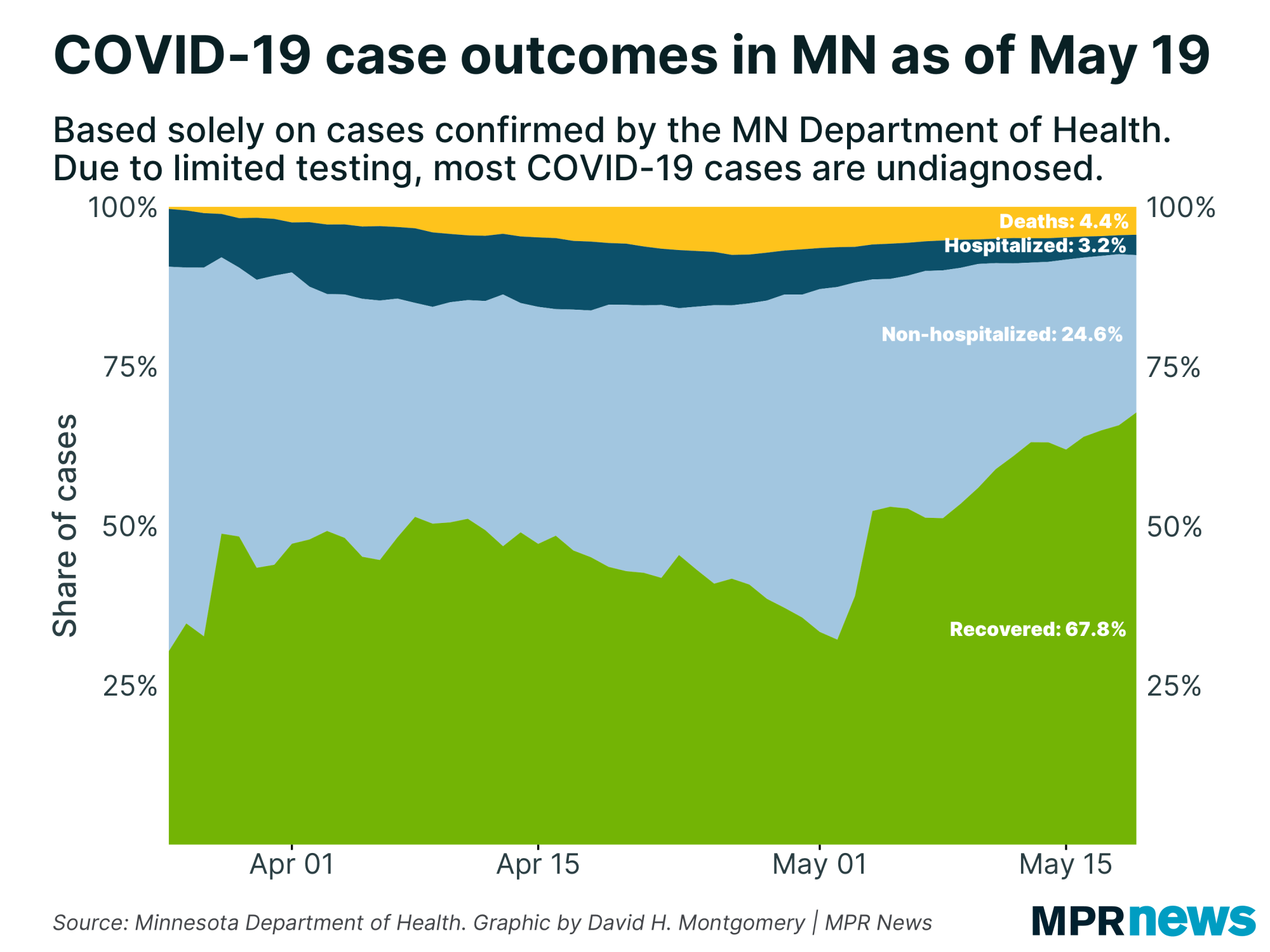 Kandiyohi County in west-central Minnesota is also seeing cases continue to climb four weeks after officials with the Jennie-O turkey processing plant there said some employees had tested positive for the coronavirus. The county had confirmed three COVID-19 cases back then.

While the counts in those counties are high relative to their population, Malcolm said growth of new cases in those areas had moderated and "hopefully, the situation is stabilizing."

Plan for restaurants, bars due Wednesday

Monday marked the first day retailers could reopen with limited capacity and group gatherings of 10 or fewer people, including at places of worship, were permitted once again.

Most retail businesses have been permitted to welcome customers back into stores with some capacity limits. But those that serve food and drinks have been restricted to takeout-only and haven’t been able to resume sit-down service.

Bars and restaurant owners have become increasingly concerned that they’ll go under if they can’t reopen soon to dine-in customers. On Monday, a central Minnesota bar owner vowed to defy the state and reopen immediately, but backed down when a judge approved Attorney General Keith Ellison’s restraining order.

Gov. Tim Walz has previously said June 1 is his goal to reopen those establishments as well as salons and barbershops, bowling alleys, theaters and other places of public accommodation.

On Tuesday morning Steve Grove, commissioner of the Department of Employment and Economic Development, said the state on Wednesday would outline a phased reopening plan.

He didn’t provide details, but in other states, that’s meant keeping restaurants from filling all their normal tables at the start.

Tuesday marked the start of a two-week candidate filing period for Minnesota’s 2020 elections.

All 201 seats in the Legislature, a U.S. Senate race and eight congressional contests are among the offices at stake in November. That’s in addition to the presidential contest and a range of municipal offices. Some state races could feature August primaries to determine party nominees.

Candidate filing opens under changed conditions to account for the coronavirus pandemic. Major party candidates are permitted to file in person, by mail or electronically.

Candidates who show up to file at the secretary of state’s office are being advised about social distancing and encouraged to wear face coverings. Minor party hopefuls will be allowed to collect electronic signatures for ballot petitions. That’s new under a temporary law change.

“The purpose of this language was to allow for the collection of petition signatures in a manner that was as close to the existing process as possible while also avoiding face-to-face contact,” the secretary of state’s website advises.

Rochester Public Schools announced Monday that graduating seniors can partake in their rites of passage through drive-up ceremonies.

Earlier this month, the district unveiled a plan to host graduations allowing 30 seniors at a time. But the next day, state education officials released their own guidelines forbidding large, in-person commencement gatherings.

Under the new plan, students would be able to receive their diplomas from the principal — who will be wearing gloves and a face mask — or pick up the diploma from a stand without having to make any contact with another person.

The Minnesota Department of Public Safety said it's implementing a plan to reopen 14 exam sites with safety measures in place. Those select stations will be open for exams as well as motorcycle and commercial driving road tests starting Tuesday. Standard road tests will begin next week.

But to start, people who had appointments canceled during stay-at-home orders will be given priority.

Staff plan to screen visitors for COVID-19 symptoms, and ask whether they've been exposed to others who have tested positive for the virus. Those with symptoms or exposure will not be allowed into the exam sites.

In a pandemic, technology helps tribe reconnect with Dakota language: Members of the Prairie Island Indian Community say there’s a silver lining for their heritage in this chaotic time. By moving Dakota language classes online, they are attracting more tribe members than ever.

Retail stores in Minnesota cautiously open: As of Monday, nonessential retailers in Minnesota with a coronavirus safety plan were allowed to reopen at 50 percent capacity.

Central Minnesota bar owner keeps doors closed despite threat to reopen: Kris Schiffler vowed Sunday he would defy the state order. But on Monday, after a Stearns County judge blocked the reopening, Schiffler complied, even as a long line of noontime customers stood at his door.

To read the original stories and see more COVID-19 reporting, follow this link to the MPR News website.  https://www.mprnews.org/story/2020/05/19/latest-on-covid19-in-mn