Gov. Tim Walz speaks at a press conference inside the Department of Public Safety in St. Paul on April 30, 2020. On Wednesday, the governor unveiled plans to end his current stay-at-home order, which is set to expire on Monday, based on a model that showed relatively little direct benefit from extending it.   Photo: Evan Frost | MPR News file

Gov. Tim Walz’s announcement Wednesday that Minnesota’s stay-at-home order would expire on May 18 came after a model produced by local researchers showed relatively little direct benefit from extending it.

The model, designed by researchers at the University of Minnesota School of Public Health and the state Department of Health, simulates the impact COVID-19 could have on the state, based on estimates about the disease. Its latest version was released Wednesday, after earlier versions in March and April.

Researchers used the model to simulate how many people might get infected, might need to be hospitalized and might die from the disease under various scenarios — from a quick reopening of the state to a stay-at-home order that stretches into the fall.

In general, the model predicts that extending the stay-at-home order longer will save lives. But based on its understanding of how diseases like COVID-19 function, it estimates that more than 20,000 Minnesotans are likely to die in the pandemic, even if a stay-at-home order stays in place until the fall. As of Thursday, the Minnesota Department of Health has reported that 663 people have died of COVID-19 in the state.

This isn’t to say the model suggests humans can’t affect the course of the pandemic. Even though it predicts that social distancing’s impacts on the outbreak’s total death toll would be relatively minor, those impacts represent hundreds or thousands of lives saved — no small factor. The more significant impact of stay-at-home measures, according to its simulations, is not fewer deaths, but delaying those deaths.

For example, a scenario that mirrors Walz’s Wednesday announcement — in which Minnesota’s stay-at-home order ends on May 18, followed by a period of less-intense social distancing — projects that by the end of May, an estimated 1,441 people will have died of COVID-19 in Minnesota. By next March, that model predicts that just over 29,000 people will have died from the disease in the state.

But a scenario in which Minnesota’s stay-at-home order is extended until May 31 was almost as bad, with 1,388 predicted deaths through May, and 28,231 into next year. That’s about a 2.8 percent reduction in overall predicted deaths over 12 months, between the two scenarios.

The extended stay-at-home order did have a big effect on timing, in the model’s simulations. Under the scenario in which the stay-at-home order is lifted on May 18, the epidemic’s peak is predicted to hit on June 29. A two-week extension delays that peak by just one week, to July 6.

“The most effect from our mitigation strategy is to push the curve to the right, with some impact on full epidemic mortality, as well,” said Stefan Gildemeister, the state’s health economist and one of several researchers leading the modeling project, along with professors Eva Enns and Shalini Kulasingam of the U’s School of Public Health.

When he announced Wednesday that he’s allowing the stay-at-home orders to expire on May 18, Walz said he doesn’t take lightly even the small declines in deaths the model predicts.

“What they said was — and this weighs heavily on me — 'Governor, by moving this, even the model shows you might lose 800 more lives.' And those are all Minnesotans,” he said. “That is the potential if we don't get it right.”

Minnesota’s modeling doesn’t make just one prediction, it makes thousands — nearly 200 different simulations of a host of different scenarios, including policy decisions that end the stay-at-home order on May 18 or May 31.

Each simulation pairs those policy scenarios with an array of different assumptions about the pandemic, such as how quickly it might spread, how many sick people might need to be hospitalized, and how much Minnesotans might reduce their social interactions if ordered to do so. Some combinations of parameters predict deadlier outbreaks, while others are comparatively mild.

That variation is largely because scientists are still learning about COVID-19 and how it spreads.

For example, the chart below shows 50 randomly chosen simulations of the scenario in which the stay-at-home order ends May 18. The number of deaths per day at the disease’s peak ranges from just over 200 to more than 900. Most of the simulations show a similar peak around late June or early July. 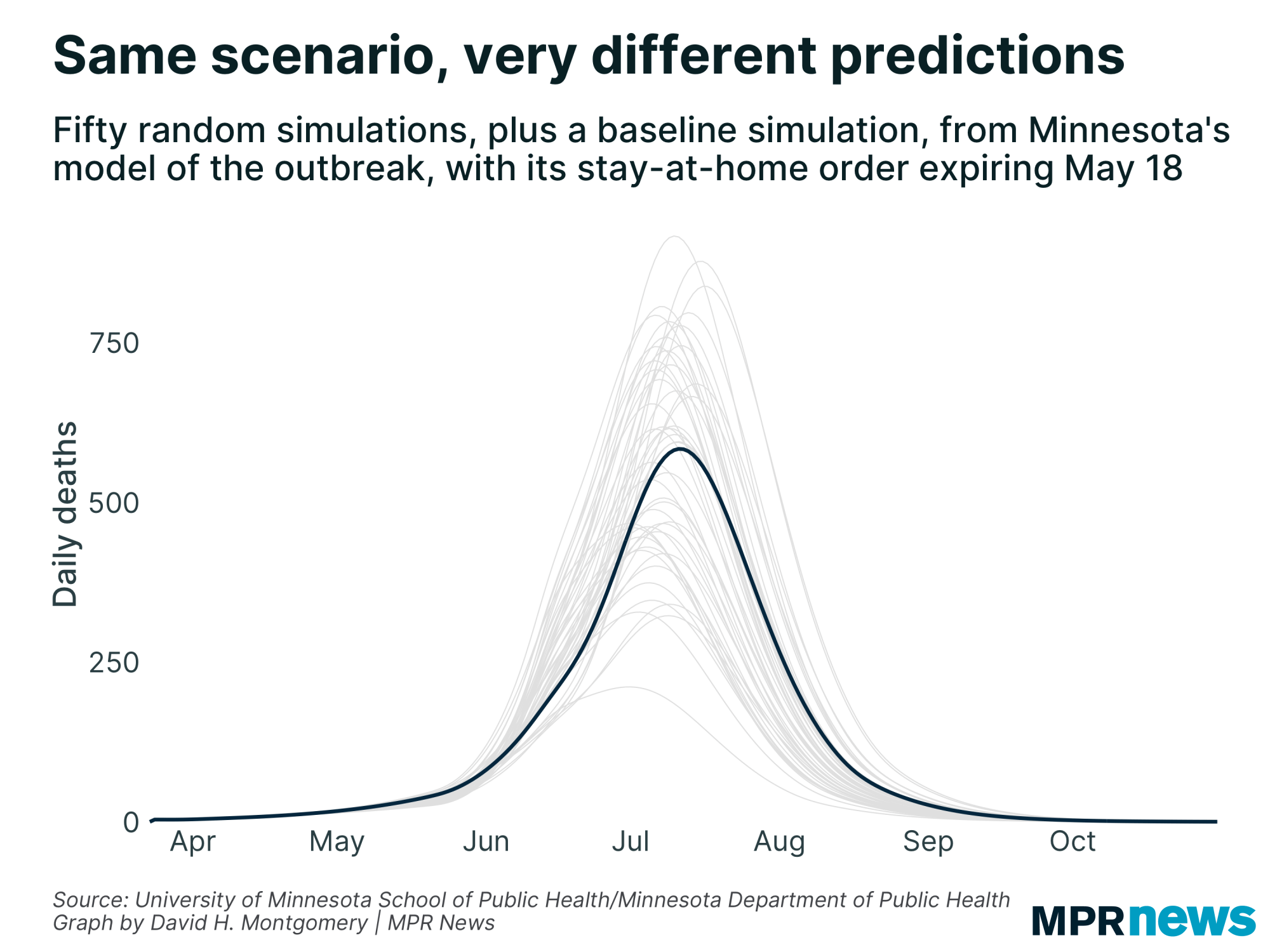 The simulations for the May 31 scenario follow a similar pattern. But as these nine randomly chosen examples show, for each simulation, the peak number of predicted daily deaths is only slightly lower, and shifted a week or two into the future. 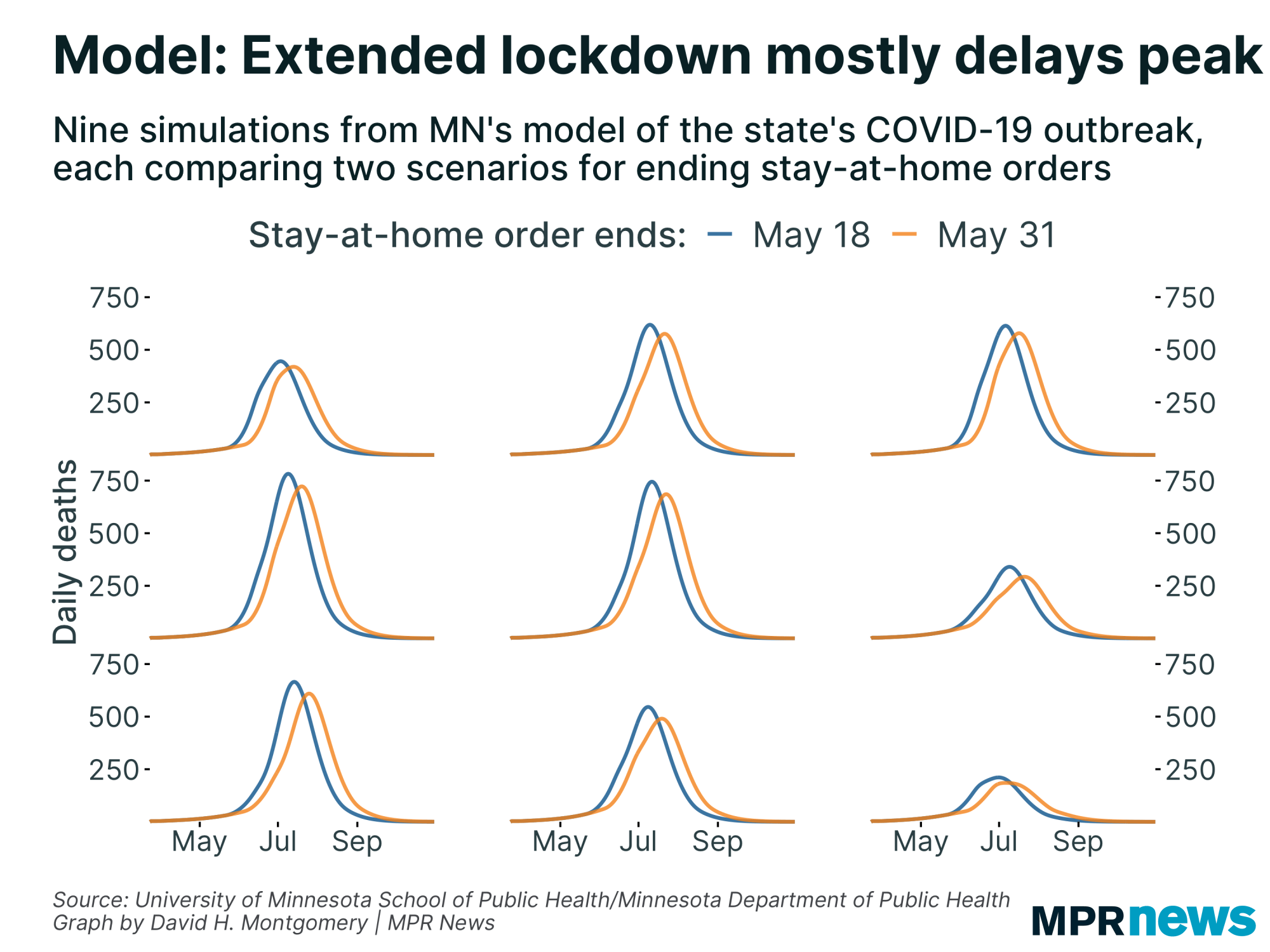 Walz used this model, along with other information about the disease and the social and economic impacts of the stay-at-home orders that have been in place since late March, to make his decision, announced Wednesday, to allow the order to expire on May 18.

The governor also acknowledged that the long-term “sustainability” of a stay-at-home order was “a key factor,” and highlighted the fact that Minnesota has been slipping recently on dashboards that use cellphone location data to grade states on how often people are going out and about.

Gildemeister said that earlier modeling showed COVID-19 to be infecting more people than would have made sense if people were truly reducing their social contact by 80 percent. But even under the stay-at-home guidelines, they’re not.

“The actual and most likely reduction in contact is lower than what we had assumed,” he said.

While most scenarios showed little change in the amount or timing of COVID-19 deaths in Minnesota, the researchers did find one change that made a big difference — extending the stay-at-home order well into the summer or fall.

Under a metric inspired by the federal Centers for Disease Control and Prevention’s guidelines, the researchers modeled what the outbreak might look like if Minnesota didn’t lift its stay-at-home order until COVID-19 hospitalizations had declined for 14 straight days — according to the model, that would fall on Sept. 7.

The extended stay-at-home scenario didn’t just delay the peak of the outbreak, it dramatically lowered its intensity — while also somewhat prolonging it. The chart below shows 50 simulations from the May 18 scenario and from a scenario that follows CDC recommendations. 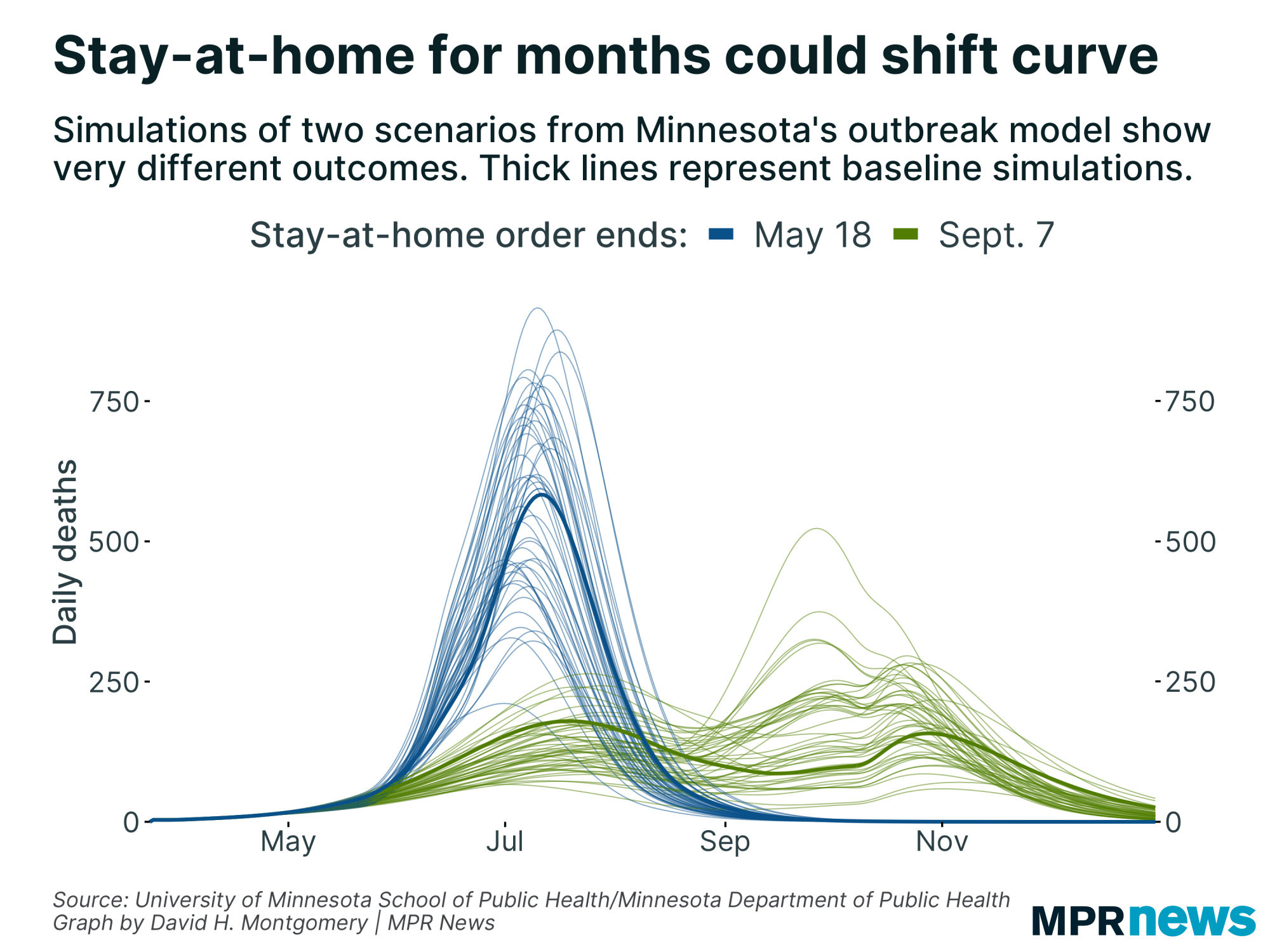 This extended stay-at-home scenario still produced a similar number of total predicted deaths, when compared to scenarios that lift the stay-at-home order early. It showed that deaths, by the time the outbreak was over, were about 10 percent less, but spread out over a longer period of time.

“If I was to go the very safest route, according to the model, that would be September,” Walz said during his announcement Wednesday evening. “But I would argue there's another side of the ledger, that we would have not just economic issues sheltering in place … till September, we would have serious health issues.”

But that disheartening conclusion — that even drastic and long-lasting mitigation efforts might still mean tens of thousands of Minnesotans will die — might not tell the whole story.

Benefits to delaying peak of outbreak

The University of Minnesota researchers simulated eight different primary scenarios, modeling different potential policies for stay-at-home orders and social distancing. But for some of these scenarios, they also modeled alternate versions that added other factors into the mix, such as the impact of expanded COVID-19 testing, or the development of an effective treatment for the disease.

From these scenarios, they concluded that delaying the peak of COVID-19 in Minnesota would have more benefits than the relatively small reduction in deaths their simulations predicted. Those delays could buy time for the development of new treatments that make COVID-19 more survivable, or to ramp up testing that can more quickly identify and quarantine outbreaks before they spread.

“The question is, ‘What are we doing with that extra time?’” Gildemeister said. “That's where the treatment scenarios come into play. Just buying time without using it will not dramatically change the outcome of the disease.”

To that end, the researchers simulated scenarios in which some sort of treatment — such as the experimental COVID-19 drug remdesivir — helps people with the most severe cases survive.

The researchers modeled how death rates might be affected if an effective treatment were to become available in late summer. Their simulation predicted about 3.5 percent fewer deaths in that situation. But such a treatment can only have an impact if drugs are available while people are sick, and in the scenarios when stay-at-home orders ended in May, the COVID-19 outbreak peaked in June or July — too early for a late-summer drug to save many lives.

Another factor that could lead to more deaths is the state’s availability of intensive-care beds with ventilators.

Based on clinical observations of COVID-19, the researchers assumed that if a patient needs a ventilator but can’t get one, they are certain to die. When estimating whether patients would be able to get an ICU bed or not, the model used a fixed estimate of around 2,200 available ventilators, which is about how many can be available in Minnesota now with a few days’ notice.

But delaying the peak of an outbreak by a week or two could give the state extra time to get more ventilators, saving lives. 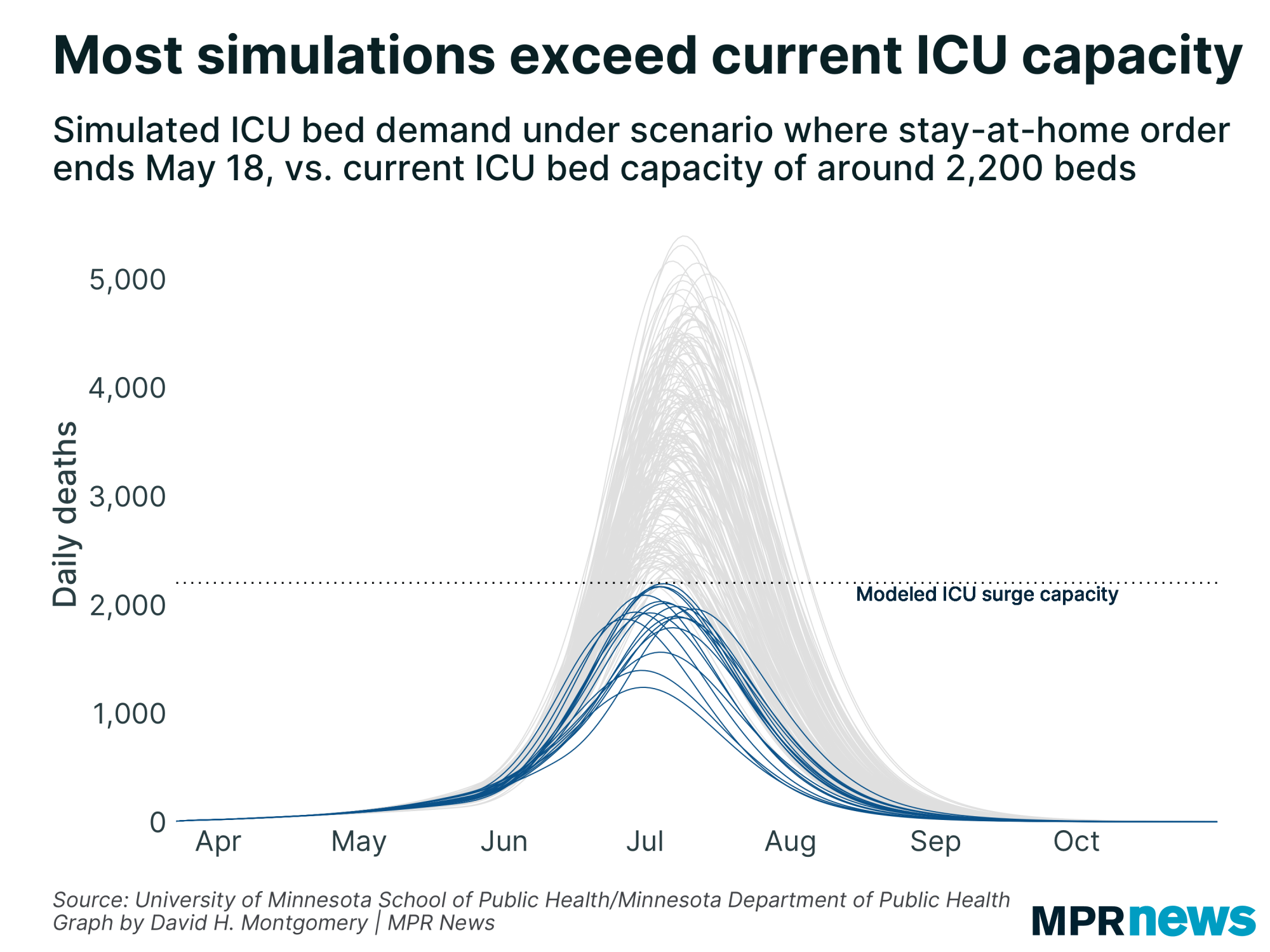 Walz said Wednesday that the existing stay-at-home order had already allowed Minnesota to make this kind of improvement.

“We know that this will mean more people will get sick and some will end up in the hospital. We have prepared for that inevitability,” Walz said. “We have increased ICU beds and ventilators for those who get really sick. We have masks, gowns and gloves for the health care workers who will have to take care of them.”

More robust testing could also help limit the damage of outbreaks. If tests are readily available, infections can be caught sooner, before the disease can spread to more people. Under the model, fewer infections lead to fewer deaths. 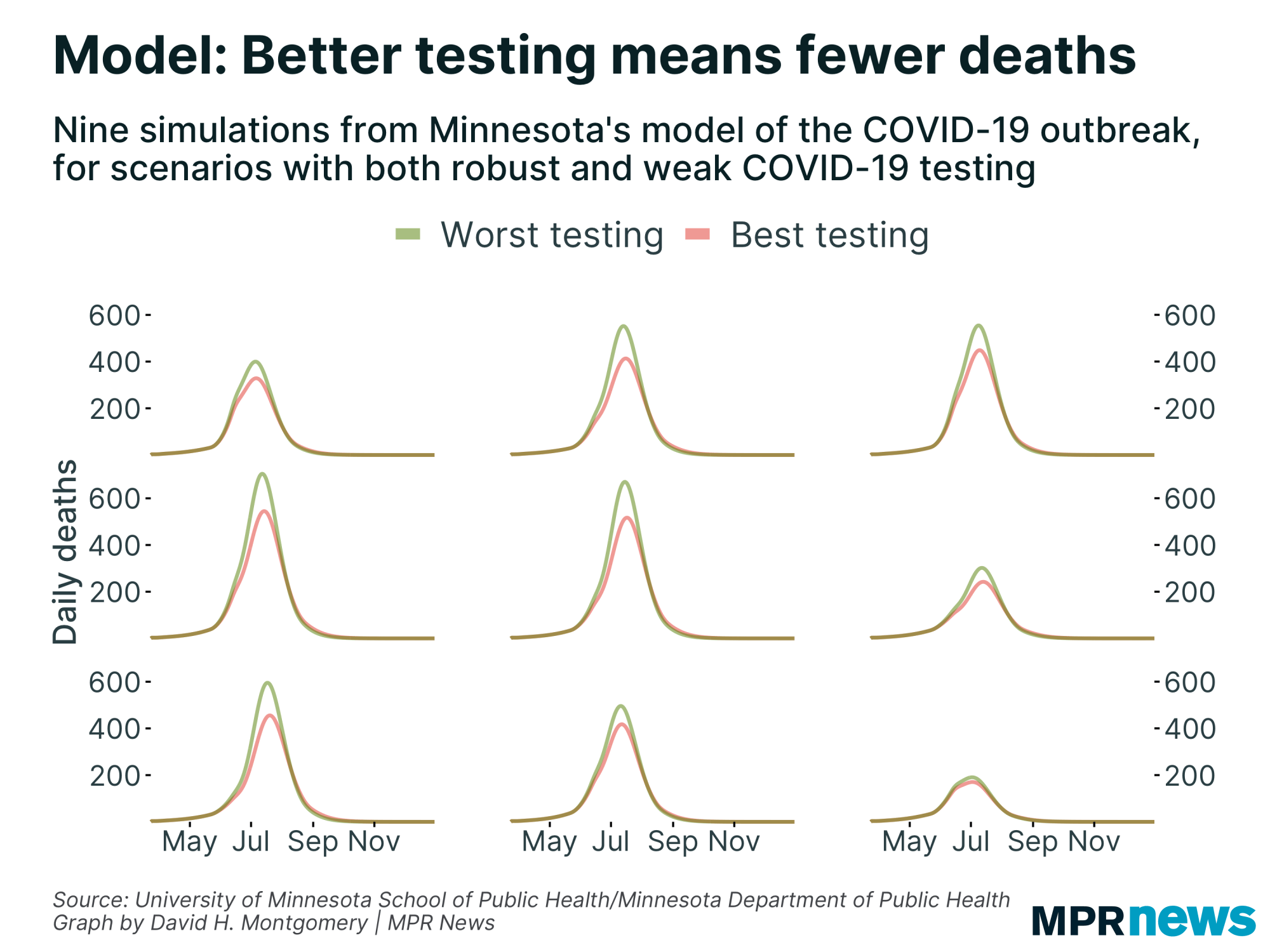 But the model’s main scenarios, comparing different dates for lifting the stay-at-home order, don’t include these lives saved from better testing or treatment, even if delaying the disease makes that testing or treatment possible. The charts showing little improvement from extra social distancing are apples-to-apples comparisons assuming similar available treatment and testing options.

There’s no guarantee that extra time would lead to improvements on these measures, but if Minnesota did use that time well, the state’s model suggests more lives could be saved than their direct simulations say.

The latest version of Minnesota’s model was released to the public on Wednesday, along with its source code. Researchers said that their simulations were made to inform political leaders and the public, not to recommend particular scenarios.

Minnesota’s model is one of a number of attempts to use computer modeling to predict the course of COVID-19. Each modeling approach uses different methods and produces significantly different predictions. Compared to other models, Minnesota’s is generally more pessimistic about the death toll the disease will have. The researchers have said they hope their predictions end up being too pessimistic.

The model is written in the computer language R, and uses a modified form of a standard epidemiological computer model called an SEIR model, which estimates the number of people Susceptible, Exposed, Infected and Recovered from a given disease. The customized model accounts for things such as asymptomatic carriers that typical SEIR models don’t.

The researchers say they’ll continue to update the model and produce new simulations in coming weeks.