As Minnesota retailers reopen, they're navigating a new way of doing business By Lauren Rosenthal of Minnesota Public Radio News - May 11, 2020

Lisa Rojas had a feeling her clients would miss her. But exactly how much became clear last week.

Rojas is the owner of Dreadlocks for Dingoes, a dog groomer that’s been operating in the Twin Cities for 25 years. While the business was closed due to COVID-19, one client took matters into her own hands — and went a little wild with the clippers.

"This is all long and shaggy and matted, and this is all cut off," she said, gesturing on a Zoom call. "And they walk in like, 'What happened to me?' It’s almost like they know. ‘My mom’s not the one who usually does this. Can you please do this instead of her?’”

Monday marks one week since Dreadlocks for Dingoes and many other “nonessential” retailers in Minnesota were allowed to reopen — with limitations. Those stores and service providers had to take safety precautions and minimize their contact with customers, navigating a new way of making sales and doing business.

On top of hilarious home haircuts, Rojas said reopening has brought new stress for her and the 10 employees who work alongside her.

They’re supposed to stick to curbside pickup and delivery — that’s what Gov. Tim Walz's order says on paper. In practice — it’s complicated. Rojas supports the rules and says she tried to limit in-person interactions with her customers. But she couldn’t figure out how to return their dogs to them safely.  Dreadlocks for Dingoes’ St. Paul location is on a busy street in Lowertown.

"We’re not dealing with hamburgers or food. We’re dealing with live animals. The risk of them getting off leash between the car and my front door was too great for me," she said.

Now, Rojas is asking customers to duck in one at a time to pick up their pets. No outside leashes or collars allowed.

Other businesses have had a much easier time keeping distance from their customers. At least, to start. 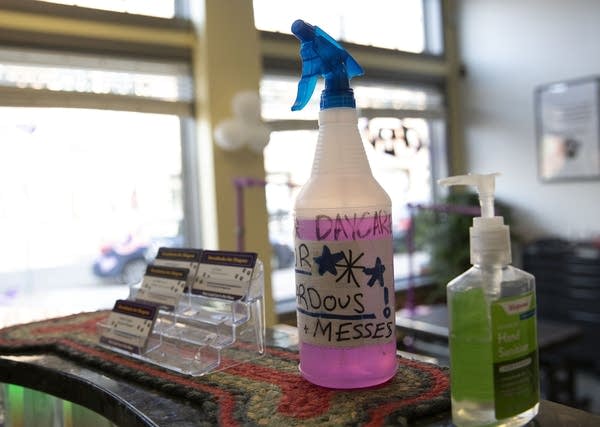 Emily and John Law own Flom Designs and Photography, with a studio in downtown Hibbing, Minn.

The studio opened again last week, for pickups and deliveries. The Laws have started out slow, by taking orders to design and print lawn signs that celebrate Hibbing’s high school graduates.

"A picture of the senior, the school they go to and the year. Pretty simple and straightforward," Emily Law said.

Taking portraits of families, however, will be a lot less straightforward. The Laws are still trying to come up with their own safety rules that would limit the risk to themselves and their clients. They’ll book only one studio session a day, to give themselves time to disinfect the space.

"Unless maybe it’s outside? At their house, I can still try to social distance," she said. 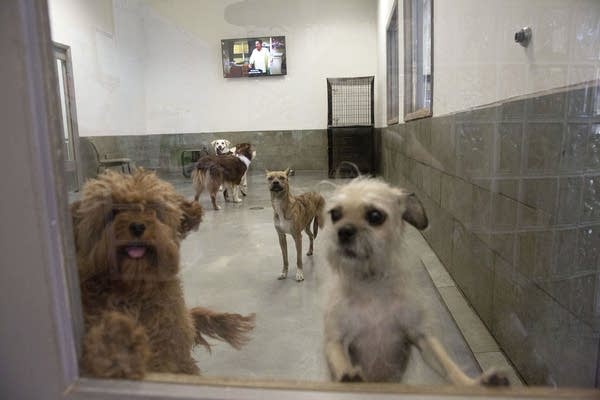 "We’re kind of going back to where we started, because we used to do all the photo sessions at people’s houses or outside at a park, and we feel like that’s what we’re going to have to do for a while here," John Law said.

The Laws know they’re lucky. Even when the photo studio was shut down, they still had John Law’s salary to fall back on. He works in IT for the state Department of Corrections, with benefits.

But in Hibbing and around the state, unemployment is growing. And some small businesses are still closed under the governor’s stay-at-home order. Barber shops and salons are still banned from cutting hair, until it can be done safely.

"We have two friends that are hairstylists. They are the bread and butter for their family, for each of their families. They haven’t been able to do anything for two months. It’s just hard, and I’m sure that people understand that," John Law said.

By people, he means the state officials who are in charge of deciding how these economic restrictions play out. The governor’s stay-at-home order is currently scheduled to expire in one week. That means Walz and state health officials will need to make the call this week about whether and how to adjust their rules for Minnesota businesses.

To listen to the original story and read related reporting, follow th slink to the MPR News website. https://www.mprnews.org/story/2020/05/11/minnesota-retailers-reopen-navigating-new-way-business