Tammy Sheehan of Prairie Village, Kan., sews masks on her vintage sewing machine “Loretta,” named for Loretta Zabinski of Ely, Minn. Sheehan bought the machine at an estate sale in Ely in 2019, and reconnected with Zabinski’s family when she started using Loretta to make masks during the COVID-19 pandemic.  Photo: Courtesy of Tammy Sheehan

When Ed Zabinski was 6 years old, his family moved from a small town in Wisconsin to Ely, Minn., where his dad had been hired to teach eighth grade English.

"I remember driving through town and they had some wolf pups in a little cage on Main Street,” Zabinski recalled. “And I thought, we are really getting into the wilderness."

Ely's Pioneer iron mine was booming. Town was so busy, with hundreds of miners, that Ed remembers it taking his family a while to find a place to rent. The wife of the school district’s superintendent eventually helped them locate a suitable house.

A couple of years later, they built a house outside town on Shagawa Lake. Ed's mom, Loretta, lived there for more than 50 years. She died last June, and later in the summer Ed and his six siblings returned to the house one last time, from all over the country, to get it ready to sell.

They packed up boxes of memories, filled up a couple dumpsters with trash, and hired some people to sell the rest.

"That was last September,” said, Ed, who works as a consultant southwest of Ely in Grand Rapids, Minn. “And we didn't know who bought anything that was sold in the estate sale."

Tammy Sheehan and her husband Tom were camping at Fall Lake, Minn., outside Ely at the time. The couple lives in Kansas, where Tammy is a psychologist and Tom is a teacher.

They’ve visited Ely several times — they say they’d like to move there when they retire. During their visit last September, they stumbled on the Zabinskis’ estate sale.

The 301 — Loretta Zabinski’s antique Singer sewing machine, which she’d used to teach all of her daughters how to sew — was exactly what Tammy had been searching for, for more than a year.

"So, we made an offer, and I asked one of the ladies there the name of the owner,” Tammy said. “And they said her name was Loretta. And I said, ‘OK, I'm going to name the machine Loretta.’”

People who collect sewing machines often name them after a prior owner, she said. “So you have a lot of Rubys and Pearls” out there — and Loretta.

Tammy Sheehan returned to Kansas City a few days later. She took Loretta home with her, cleaned her up. Her husband installed it in a traditional sewing cabinet. She made a couple quilts with it, and was quickly smitten.

"I love these old devices that work really well,” she gushed. “There is nothing computerized about it, and it lasts forever. You just oil it and off you go."

But then, the pandemic hit. Tammy Sheehan was furloughed. And her husband asked her to sew some masks they could wear to the store.

"So, I pulled out the 301, and it was such great fun to sew,” she said. “I just started making more and more of them and giving them away to friends and family. And then I just thought, well, I want to know more about this story about Loretta because the machine is just so dear to me."

So, she posted a message on an Ely Facebook group.

"I never had the pleasure of meeting Mrs. Zabinski," she wrote, "but I hope she would be pleased that this baby is back in action making masks for the cause. This machine has a great little gizmo that sews mask ties like nobody's business. If anyone can tell us about Mrs. Zabinski, we'd love to know her better!"

Within hours, dozens of people had responded, sharing memories of Loretta Zabinski. “A beautiful, humble, sincere lady, helped everyone,” one person wrote. “I cherished our many conversations and having her as a Grandma figure!” wrote another. Then someone forwarded the post to Ed.

“My mother would be delighted,” Ed said, to hear that her old sewing machine was being used for such good.

But what really surprised him, reading through the Facebook posts, “were the dozens of comments of people who I never knew, people that my mother had helped over the years finding housing. We had no idea that she had touched so many lives in the ways she had.”

It turns out that Loretta Zabinski never forgot about the help she had gotten from the superintendent’s wife, when her family first arrived in Ely and couldn’t find a place to live. So for more than 50 years, Loretta Zabinski repaid that favor.

"She kept a little index card box with places that people had available to rent,” Ed said. “And then when people called, she referred to that file box."

She started by helping teachers' families. But over time, she helped people arriving in Ely to work for the Superior National Forest, the Minnesota Department of Natural Resources, Vermillion Community College and other businesses in town.

“She was Ely’s unpaid housing coordinator for decades,” wrote one commenter.

“Loretta was famous here in Ely,” someone else wrote. “Many who will read this post were impacted by her service to Ely. And she never drove a car!”

And she never stopped helping. Ed was with his mom at her home the day before she died. She was almost 95. She couldn't walk on her own. And that day, he said, two people called, looking for help finding a place to live. 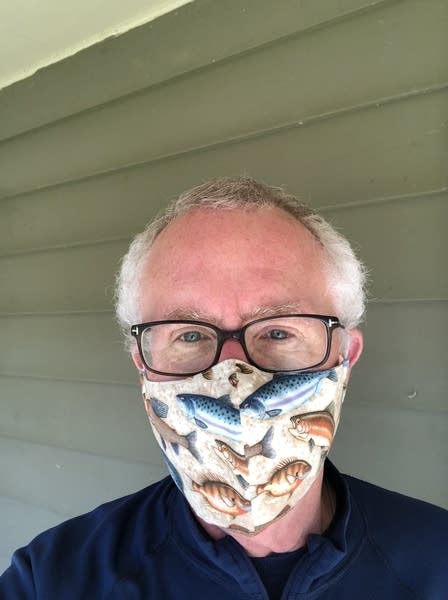 Ed Zabinski of Grand Rapids, Minn., wears a mask sewn by Tammy Sheehan, who bought Zabinski’s late mother Loretta’s sewing machine at an estate sale last year. After posting a message on Facebook, she connected with Zabinski, who saw an outpouring of memories and gratitude for his mom.  Photo: Courtesy of Ed Zabinski

“She promised them she’d get back to them,” Ed said.

He said this experience has made him “reflect on the good that you do in life, and hopefully that has an impact. And I think in many cases, you never know the impact you have — until later.”

And Loretta — the sewing machine — is still helping.

Tammy Sheehan said she never would have learned about Loretta Zabinski if it hadn't been for the pandemic.

And if Tammy Sheehan hadn't asked, Ed Zabinksi never would have learned just how much impact his mother had on the town of Ely.

To hear an audio version of this story and read related stories, follow this link to the MPR News website.  https://www.mprnews.org/story/2020/05/09/how-a-pandemic-and-an-old-sewing-machine-showed-a-son-his-m...