A sign with encouraging words for the class of 2020 outside a house in St. Paul on Tuesday. Minnesota education officials on Friday announced that the state is banning traditional, large-scale high school graduation ceremonies to limit the spread of the coronavirus.
Photo: Megan Burks | MPR News file

The death toll in Minnesota rose to 558, with the overall number of confirmed cases increasing by 702, for a total of 10,790.

The Minnesota Department of Health reported 4,993 test results in its data release on Saturday; Gov. Tim Walz has said the state should be testing 5,000 people daily as part of the plan to reopen the economy.

Minnesota health and education officials on Friday banned large in-person graduation ceremonies to curb the spread of the coronavirus. Officials said graduates and their families should celebrate this rite of passage, but do it virtually, not in person.

And another development from Friday: Documents show Minnesota plans to spend up to $7 million to buy a cold-storage facility to use as a backup morgue. Walz said earlier this week that he expects the state to have 1,000 deaths by the end of May.

Officials confirmed those plans but declined to say where the morgue would be set up. Most of the deaths so far have been in Hennepin County, which has had 362.

Here are the latest coronavirus statistics as of Saturday:

Overall, a Friday briefing by state officials offered a sobering reminder that even as Minnesota inches back toward normalcy, the fight against the disease is nowhere near done and the damage done is nowhere near complete.

“What I don't think has sunk in yet, this thing is going to be with us at least until we get really good therapeutics, or we get herd immunity, or we get a vaccine,” said Walz. 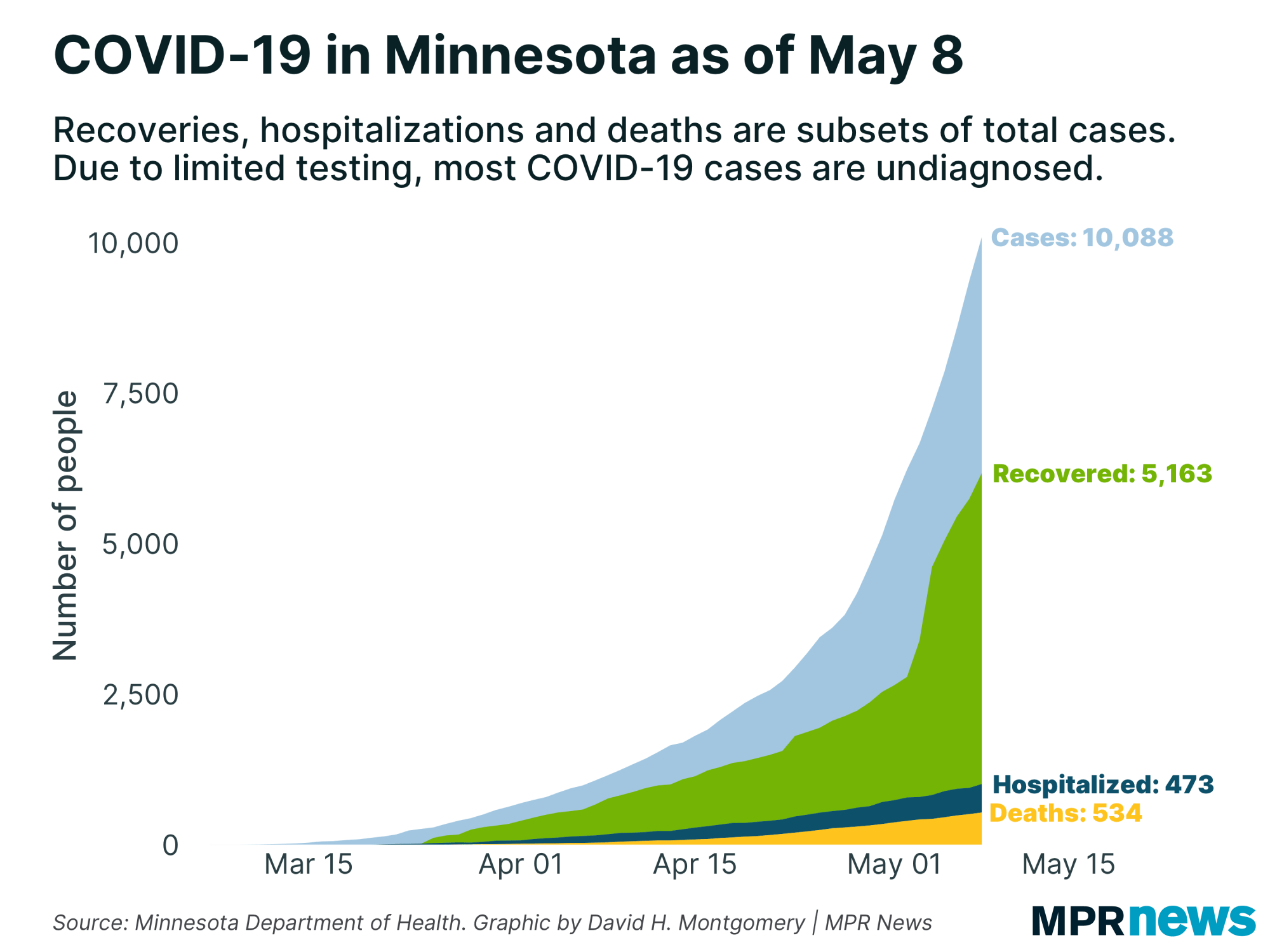 State officials continue to reiterate growing concern about COVID-19’s effects on the state’s communities of color.

On Thursday, Malcolm noted worrisome illness trends among care workers in congregate care, noting that workers of color were falling ill at relatively high rates. African immigrants make up a “critical part of the workforce,” Malcolm said. “We can see with this data that they are being quite disproportionately affected as well.”

Lt. Gov. Peggy Flanagan noted that many black and Latino citizens are in jobs that make them vulnerable to exposure, “exposing and exacerbating … inequities that have been here all along.”

Economically, Flanagan said more than 25 percent of people of color in the state’s labor force are seeking unemployment benefits. That includes nearly 1 in 3 black Minnesotans in the labor force.

In southwestern Minnesota’s Nobles County, where an outbreak hit Worthington’s massive JBS pork plant, about 1 in 18 people have tested positive for COVID-19. In mid-April, there were just a handful of cases. On Saturday, there were 1,230 confirmed cases as testing in the region ramped up.

There were 55 confirmed coronavirus cases in Stearns early last week. By last Sunday, as testing intensified, there were 589. And by Saturday confirmed cases had jumped to 1,348, surpassing Nobles County.

Kandiyohi County in west-central Minnesota is also seeing cases jump two weeks after officials with the Jennie-O turkey processing plant there said some employees had tested positive for the coronavirus. The county had confirmed three COVID-19 cases back then. On Saturday, the Health Department reported 276 people have now tested positive.

State education officials Friday morning formally announced what many expected: Minnesota is banning traditional, large-scale high school graduation ceremonies to limit the spread of the coronavirus, and is encouraging schools to hold online ceremonies instead.

The Minnesota Department of Education issued guidance saying indoor graduations and ceremonies held outside in stadiums and on football fields are not permitted. It said such gathering are not considered safe at any size.

Walz and Malcolm were asked later if smaller district ceremonies or graduation parties beyond immediate family could be held. Malcolm indicated new guidance may be coming on the size of gatherings after the governor’s current stay at home order expires on May 18.

“We will be discussing the size of gatherings further in the next coming days,” said Malcolm, but for now the guidance continues to be no gathering beyond immediate family.

The state, she said, is “heading up the steepest part of our curve,” she said. “People should not be gathering in large groups outside of their households.”

Tensions are growing over Walz’s power to direct spending around COVID-19 without broad approval of the Legislature.

Since March, the Walz administration has pulled from a $200 million fund for urgent needs after consulting select lawmakers. That power expires early next week, but a bill to extend the authority another year is advancing.

“This is our job. This is what we’re supposed to do to be involved in that,” he said.

DFLers, who control the Minnesota House, say it would handcuff the state’s coronavirus response. The account itself is down to about $65 million, with money going toward protective gear, testing supplies and disposal of destroyed hogs amid meat plant shutdowns.

On Friday, Walz said he’s asked the Legislature to replenish the COVID-19 fund and extend the May 11 spending deadline. 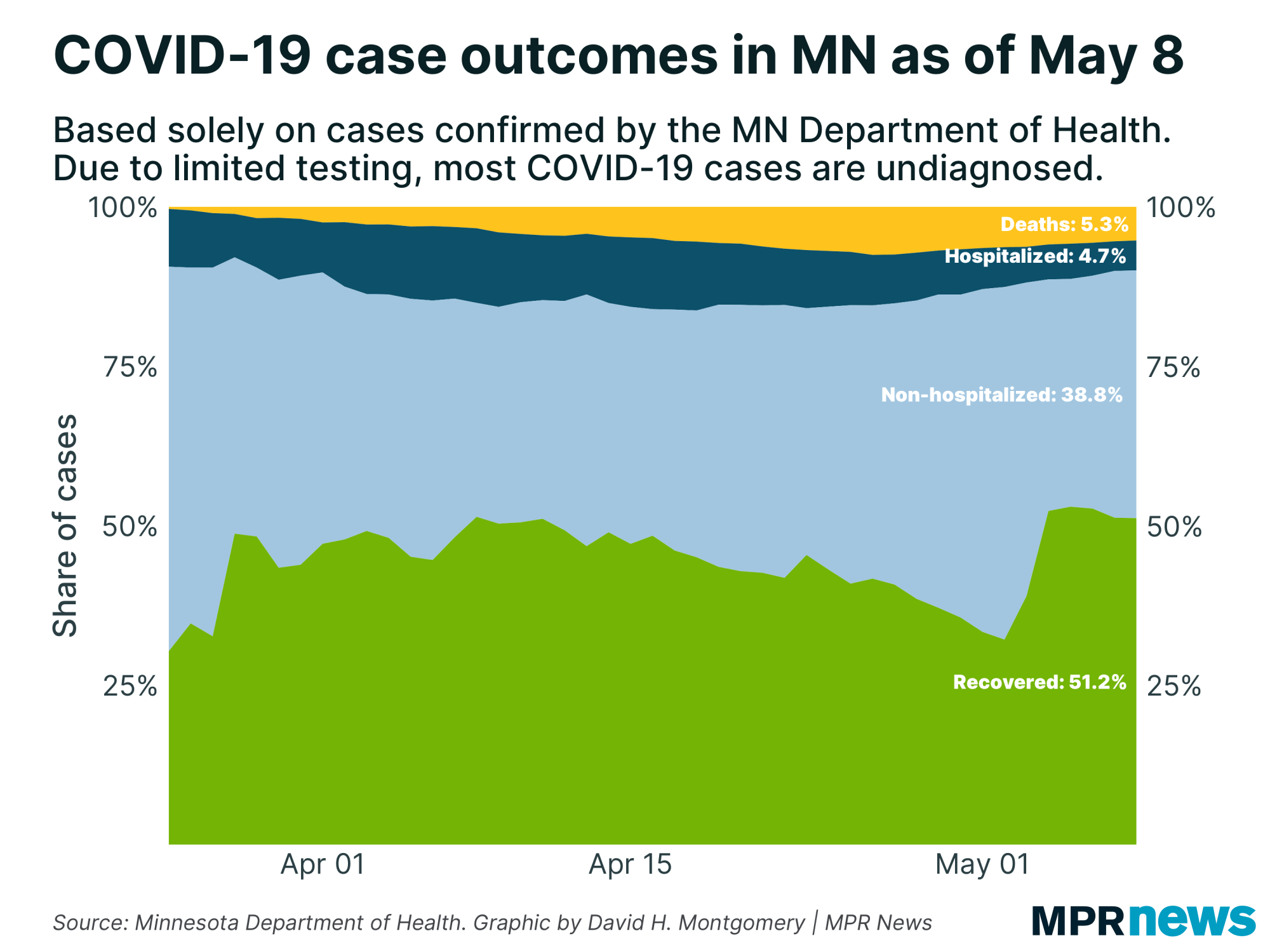 MN Zoo cuts 125 jobs as its doors shut amid pandemic

The Minnesota Zoo is laying off 48 employees and eliminating dozens more positions. In all, more than 125 positions are being eliminated.

In addition to the layoffs, several open positions are not being filled, and dozens of seasonal jobs will be suspended. The Minnesota Zoo's partner organization, the Zoo Foundation, is also laying off four employees.

In a press release, Zoo director and Foundation president John Frawley said the global pandemic has created a situation unlike any other in the zoo's 42-year history. He said animals will continue to remain exceptional care while the zoo is closed to the public. Affected employees were notified this week.

The Minnesota House on Thursday passed legislation to help many people with low incomes and small business owners get through the COVID-19 pandemic. The vote was 75-58.

The bill includes money for emergency housing assistance, rural broadband and small business loans. It also has temporary pay raises for the personal care assistants who care for the elderly and disabled. The $208 million measure would be partially paid for with recently received federal funds related to COVID-19.

“Those workers, those families, those businesses are essential to our state, and Minnesota has to act to help them get through this crisis,” Winkler said. “If we do nothing, if we let them fall through the cracks and be left behind, we are going to have a much, much slower economic recovery afterward.”

House Republicans argue that with a large budget deficit ahead, the bill is not affordable. But Republican House Minority Leader Kurt Daudt, of Crown, and other Republicans argued that a better approach would be allowing businesses to reopen.

“The best thing that you can do is [to] allow these businesses to open up safe,” Daudt said.

Senate Republicans are trying to provide help through a package of tax breaks.

The governor on Thursday reiterated the Minnesota Department of Natural Resources call for anglers to stay close to home for this weekend's fishing opener. Officials are asking anglers not to stay overnight, to bring all the supplies they need, and to only travel as far as they can go and return on a single tank of gas.

The DNR has already sold more than 350,000 fishing licenses this year. The department says it doesn't anticipate issuing citations and plans to continue to use an educational approach to enforcing the stay-at-home order.

Fishing resorts are open, although many are reporting large numbers of cancellations.

Walz said while Minnesota wouldn’t be setting up roadblocks at the borders to keep out anglers from the Dakotas, Iowa and Wisconsin, but “our guidance is to stay close to home. The more people travel, the more the spread.”

He also urged people who are driving north for fishing not to stop for gas or food.

School leaders, families struggle to plan for summer and fall learning: Superintendents say they’ve already begun moving ahead with plans for their students in the summer and fall, but remain ready to change if state leaders continue to forbid in-person learning.

Deaths in nursing homes spur officials to increase testing, bolster staff levels: As the number of deaths in long-term care facilities from COVID-19 has grown, so too has the pressure to address the issue. Minnesota officials say they have a new plan to try to get a better handle on the problem after hundreds of older adults have died.

Call to investigate poultry plant as Stearns County COVID-19 cases rise: In the past two weeks, Stearns County has emerged as a hot spot of COVID-19, with confirmed cases topping 1,100 on Thursday, as workers at a poultry processing plant in the county say their company hasn’t done enough to protect their health.

Legislature agrees on measures to make voting safer: The Minnesota Senate passed a bill Thursday that unlocks $17 million in federal funding that will be used to protect polling places from the spread of the coronavirus.

To read the original update and see related COVID-19 reporting, follow this link to the MPR News website.  https://www.mprnews.org/story/2020/05/08/latest-on-covid19-in-mn