Reed Allanson collects samples from patients in their cars at the curbside collection facility on Wednesday at St. Cloud Hospital. Photo: Dave Schwarz | St. Cloud Times
From MPR News - May 8, 2020

Gov. Tim Walz projected that Minnesota’s COVID-19 death toll would reach 1,000 by the end of May at the current pace as he and state health officials detailed a new plan to safeguard people living in long-term care facilities.

They also braced Minnesotans to expect more cases and deaths across the state, and noted the disease is falling harder on people of color. The announcements came as Minnesota hit two more sad milestones: more than 500 deaths and 9,000 cases.

Long-term, congregate care operations have concerned officials since the pandemic began, given the medical vulnerability of people living there. About 80 percent of the deaths from COVID-19 in Minnesota involve people living in long-term care. Almost all had underlying health problems.

Health Commissioner Jan Malcolm called staffing a “chronic problem” even before the outbreak. Bringing in “strike teams” of health care workers furloughed from other jobs who could fill the breach at a facility in need is one option under consideration. Walz also suggested National Guard members might be deployed.

“We are still building toward the peak” of overall COVID-19 cases and hospitalizations, Malcolm said of Minnesota’s epidemic. “We are on the steep part of the curve and we’re just going to expect to see more and more cases each day. As we test more, we will find more."

Said Walz: "We may be one of the last states to peak. But we're going to peak.”

Also on Thursday, Walz hinted that more latitude for retail businesses was coming, as he acknowledged the seeming unfairness that a small-town retailer would have to stay closed while a big-box store competitor nearby was allowed to stay open.

"I think they've done a heck of a lot of work towards that," he said. 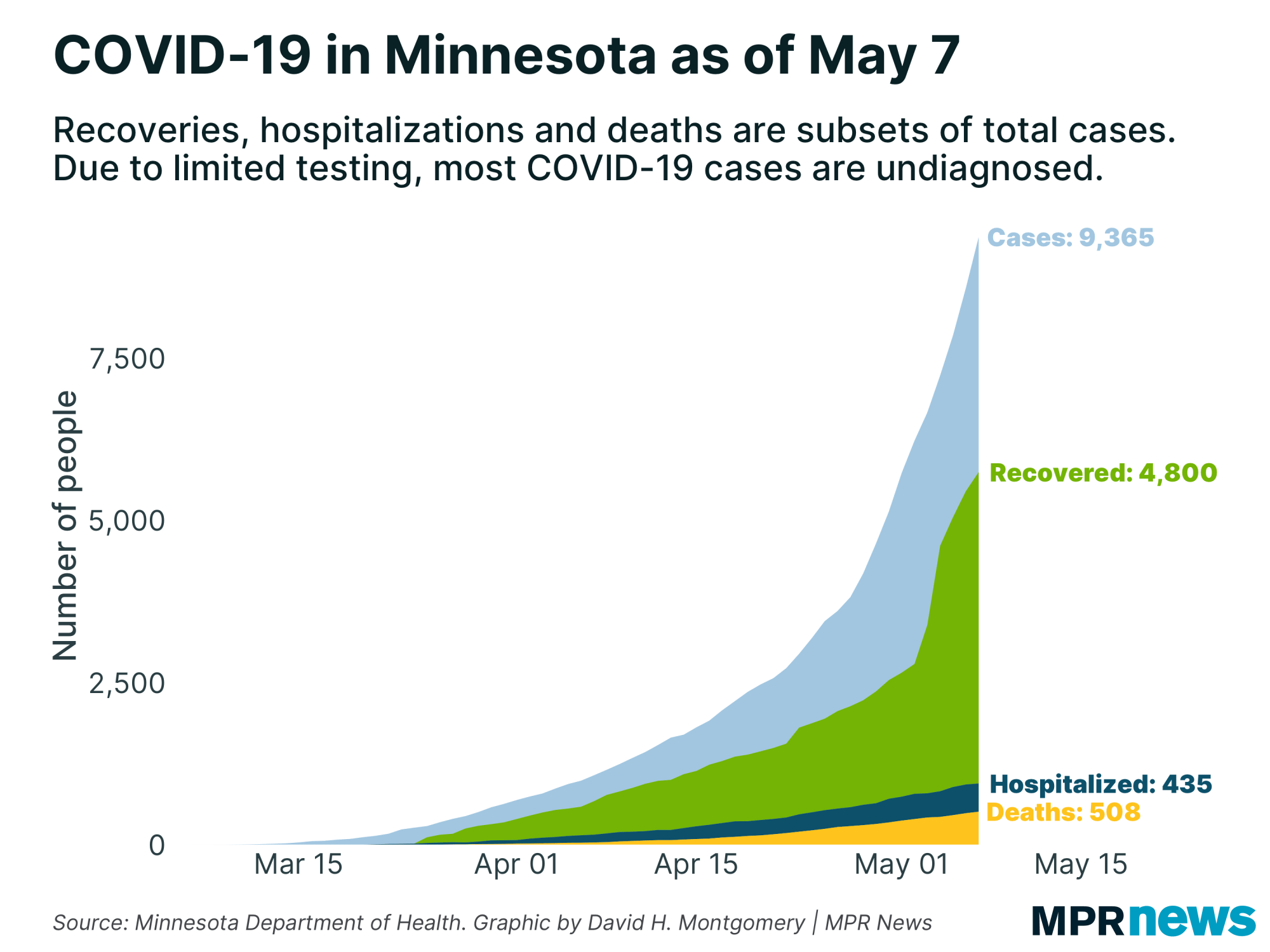 The coronavirus is falling disproportionately on people of color in Minnesota, Malcolm acknowledged. Case rates among black Minnesotans are twice their proportion of population as a whole and three times the hospitalizations compared to white population, she noted.

African immigrants make up a “critical part of the workforce,” Malcolm said. “We can see with this data that they are being quite disproportionately affected as well.”

Of Minnesota’s total positive tests for COVID-19, 1,205, about 13 percent, have been health care workers, the Health Department reported Thursday.

Total confirmed COVID-19 cases hit 9,365, up 786 from Wednesday, the largest single-day jump in cases. It continues a string of days of accelerating case counts as testing for the virus intensifies.

Many of the recent outbreaks outside the Twin Cities metro area are focused around meatpacking plants. Officials have accelerated testing in those hot spots, uncovering more infections.

Southwestern Minnesota’s Nobles County, where an outbreak centered around the JBS pork plant in Worthington, continued to have the largest outbreak outside the Twin Cities and the largest by far of any Minnesota county relative to its population.

About 1 in 20 people in Nobles County have tested positive for COVID-19. In mid-April , there were just a handful of cases. On Thursday, there were 1,153 confirmed cases as testing in the region ramped up.

There were 55 confirmed coronavirus cases in Stearns early last week. By Sunday, as testing intensified, there were 589. And by Thursday confirmed cases had jumped to 1,161, surpassing Nobles County.

Kandiyohi County in west-central Minnesota is also seeing cases jump two weeks after officials with the Jennie-O turkey processing plant there said some employees had tested positive for the coronavirus. The county had confirmed three COVID-19 cases back then. On Thursday, the Health Department reported 238 people have now tested positive.

The Minnesota House on Thursday passed legislation to help many people with low incomes and small business owners get through the COVID-19 pandemic. The vote was 75-58.

The bill includes money for emergency housing assistance, rural broadband and small business loans. It also has temporary pay raises for the personal care assistants who care for the elderly and disabled. The $208 million measure would be partially paid for with recently received federal funds related to COVID-19.

“Those workers, those families, those businesses are essential to our state, and Minnesota has to act to help them get through this crisis,” Winkler said. “If we do nothing, if we let them fall through the cracks and be left behind, we are going to have a much, much slower economic recovery afterward.”

House Republicans argue that with a large budget deficit ahead, the bill is not affordable. But Republican House Minority Leader Kurt Daudt, of Crown, and other Republicans argued that a better approach would be allowing businesses to reopen.

“The best thing that you can do is [to] allow these businesses to open up safe,” Daudt said.

Senate Republicans are trying to provide help through a package of tax breaks.

Hennepin Co. Board chair: No property tax increase next year

The chair of the Hennepin County Board said Thursday that the county will not raise property taxes next year. County Administrator David Hough said the county will need to find $50 million in cost savings to meet that target.

The board is also planning a phased reopening of public facing services. Hough said some of the changes made during the shutdown, like online services and digital document access will continue. He said most employees will also continue to work from home with help from video conferencing programs.

"Nearly every department I have met with, so far has indicated these products have transformed their ability for staff to meet together while they are apart,” Hough said.

Hough said the county is already reducing costs through a hiring freeze and not refilling jobs that open up through attrition. The board will hear more cost saving proposals in the coming weeks.

Fargo leaders look to ‘test their way out’ of virus surge

Officials say they’ve identified several COVID-19 hot spots in and around Fargo, which is North Dakota’s biggest city and which has had more confirmed cases of the disease than any other community in the state.

With the rate of COVID-19 cases and deaths in the Fargo area continuing to dwarf the rest of the state, Gov. Doug Burgum is calling on local representatives to help slow the spread. He has promised resources to help with testing and other measures he believes will keep people healthy and businesses open.

Fargo Mayor Tim Mahoney, a member of the newly created Red River Valley COVID-19 Task Force, said Thursday that he believes the city and county can “test our way out of this.”

The governor on Thursday reiterated the Minnesota Department of Natural Resources call for anglers to stay close to home for this weekend's fishing opener. Officials are asking anglers not to stay overnight, to bring all the supplies they need, and to only travel as far as they can go and return on a single tank of gas.

The DNR has already sold more than 350,000 fishing licenses this year. The department says it doesn't anticipate issuing citations and plans to continue to use an educational approach to enforcing the stay-at-home order.

Fishing resorts are open, although many are reporting large numbers of cancellations.

Walz said while Minnesota wouldn’t be setting up roadblocks at the borders to keep out anglers from the Dakotas, Iowa and Wisconsin, but “our guidance is to stay close to home. The more people travel, the more the spread.”

He also urged people who are driving north for fishing not to stop for gas or food.

Call to investigate poultry plant as Stearns County COVID-19 cases rise: In the past two weeks, Stearns County has emerged as a hot spot of COVID-19, with confirmed cases topping 1,100 on Thursday, as workers at a poultry processing plant in the county say their company hasn’t done enough to protect their health.

Legislature agrees on measures to make voting safer: The Minnesota Senate passed a bill Thursday that unlocks $17 million in federal funding that will be used to protect polling places from the spread of the coronavirus.

Deficit leaves lawmakers with painful math problem: Now that Minnesota lawmakers have a better idea of the budget problem they're facing, some want to take decisive action quickly to start closing the $2.4 billion projected deficit. But they also don’t know how federal assistance will shake out or how long the pandemic — and the economic fallout — will last.

To read the original report and see related COVID-19 stories, follow this link to the MPR News website.  https://www.mprnews.org/story/2020/05/08/latest-on-covid19-in-mn
News