Nurse Keira Conkling stands on the sidewalk in counter-protest while people drive around the the Capitol to protest the state's stay-at-home order in St. Paul on Sunday.  Photo: Evan Frost | MPR News

With dozens of deaths over the weekend, the number of Minnesotans who’ve died from COVID-19 climbed over 400 on Sunday as authorities continue monitoring coronavirus hot spots across the state. 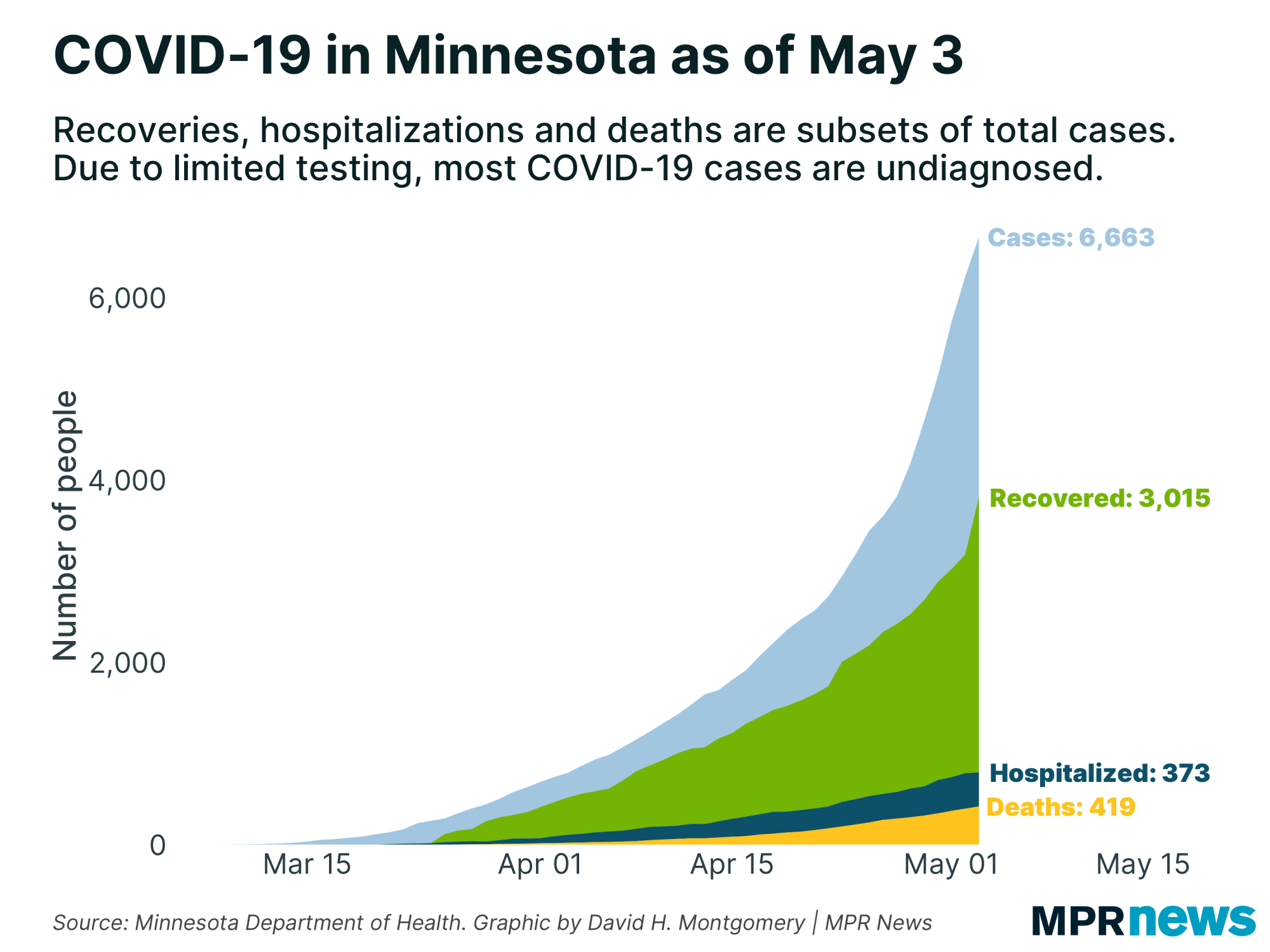 Stearns County reported a major increase in COVID-19 cases tied to meatpacking plants — the Pilgrim’s Pride poultry plant in Cold Spring and Jennie-O Turkey in Melrose. An undisclosed number of workers at both plants have tested positive for the virus.

At the beginning of last week, there were 55 confirmed coronavirus cases in Stearns. By Sunday, there were 589.

However, by far the largest outbreak relative to its population continued to be in Nobles County in southwestern Minnesota. Forty-one new cases Sunday brought the total number of confirmed cases to 940.

That outbreak is centered on the JBS pork processing plant in Worthington. The union representing workers at JBS said Sunday that it's been told the facility will reopen on Wednesday.

JBS announced an indefinite closure of the plant on April 20, amid the outbreak of COVID-19 cases affecting workers.

In a statement, union officials said workers will return to enforced social distancing at the plant, as well as expanded cleaning and disinfecting efforts.

The closure of the plant and others in the Midwest has caused major disruption in the supply chain, with some hog farmers forced to kill healthy pigs because there was no place to process them. 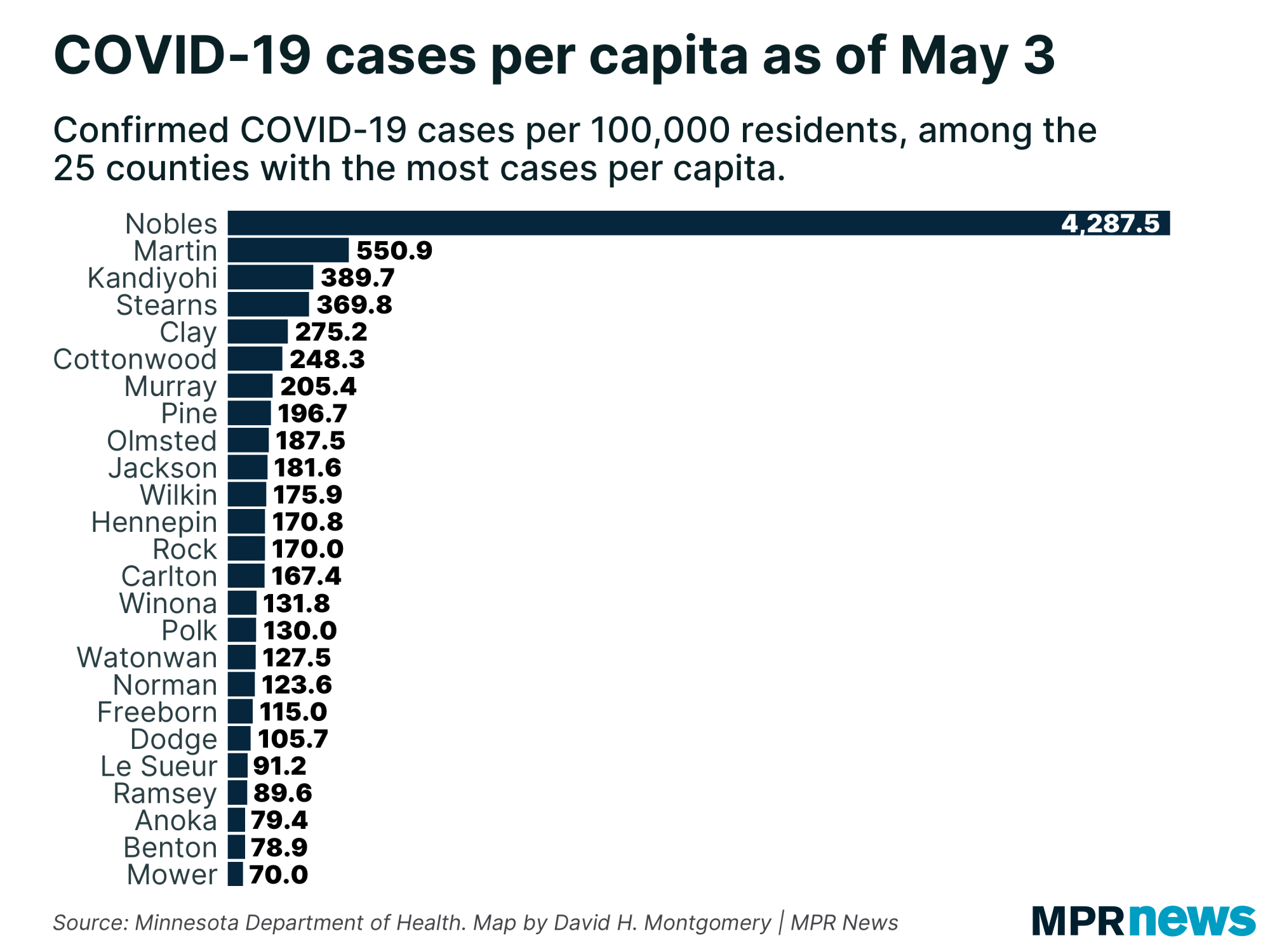 Over the weekend, health officials reported 48 coronavirus deaths, 42 of which were residents of long-term care facilities.

Most of those who died were in their 70s or older, but one of the dead was a person in their 40s with no underlying health conditions. Health officials say they won’t release more details about the death.

Health officials are cautioning families against removing their loved ones from nursing homes or group-care facilities. Minnesota’s infectious disease director Kris Ehresmann said Friday that families must consider whether they can provide the specialized care that professional facilities do — while weighing all the unknowns of the coronavirus pandemic.

"It's not a short-term situation. It's not, 'Well, if we could just take mom or dad home for the weekend, that would make a big difference.' This is months and months," she said.

In addition, officials said moving someone from a long-term care facility can be dangerous and disruptive to their health.

More than 100 such facilities in Minnesota have at least one COVID-19 case, and 21 facilities have 20 or more cases.

Up to 30,000 people will be back at work Monday as retailers and other businesses become able to offer curbside pickup of purchases under Gov. Tim Walz’s tweaked stay-at-home order, which now lasts until May 18.

Restaurants and bars remain restricted to take-out only. Places like those and other spaces where large crowds gather will be among the last to reopen, Walz said.

Still, protesters once again gathered in St. Paul to oppose Walz’s orders, taking to the Minnesota Capitol on Sunday.

Some in the crowd carried Trump campaign signs; others had assault rifles or confederate flags. Facemasks were less common.

State leaders say they recognize the disruptions to daily life, but “we do have sort of an index of caution around the fact that we’re seeing the case numbers increase rapidly” as testing ramps up, Health Commissioner Jan Malcolm said.

She said health officials have been “very sobered” by outbreaks in southwestern Minnesota and other hot spots, and “at a time when we feel like we’re just getting our arms around the true spread of the disease, there’s some reluctance to open more broadly.” 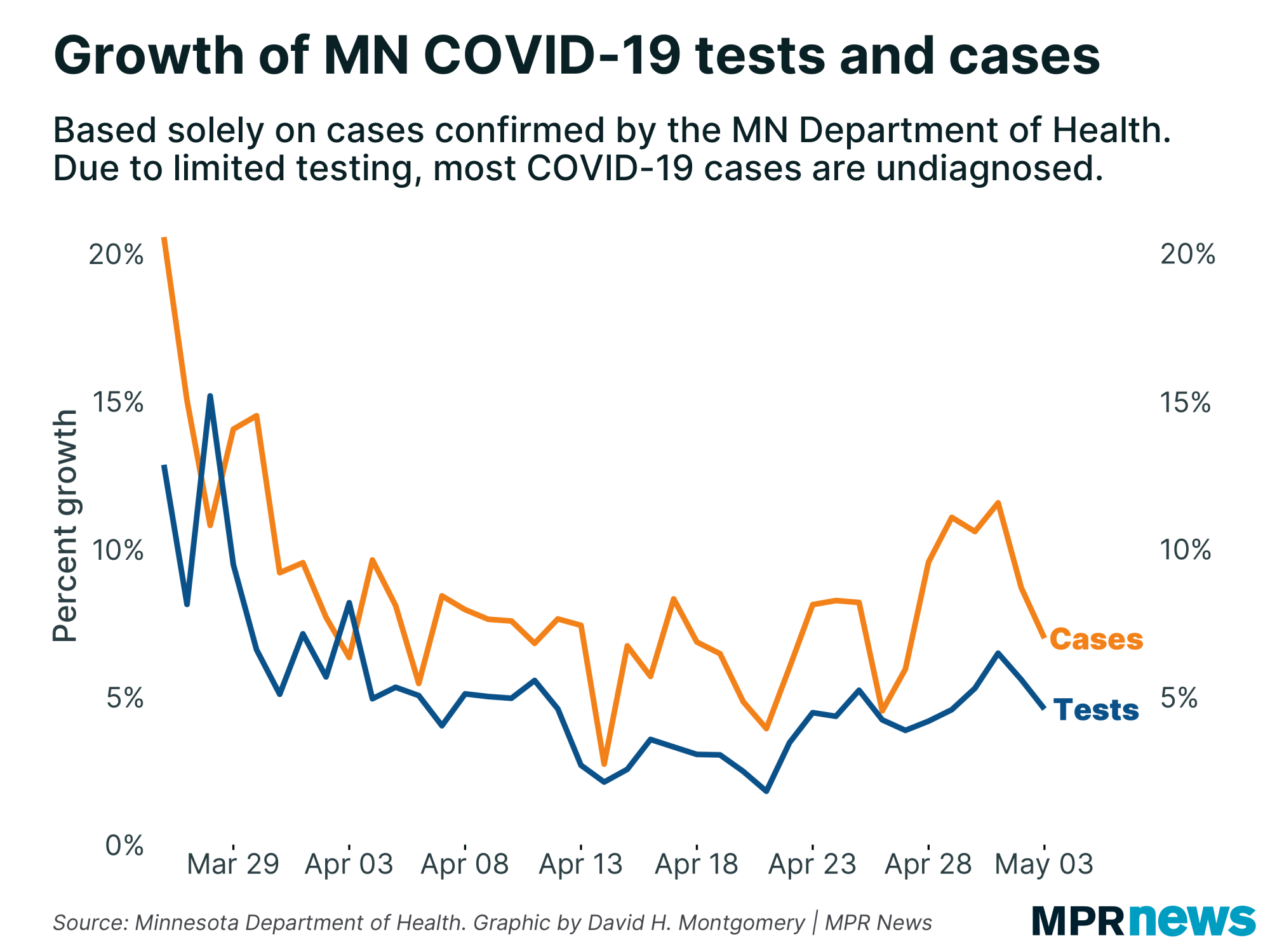 “Non-essential” retailers in Minnesota can open for curbside pick-up or delivery, provided the workers wear masks and the businesses have a plan for operating safely.

Hobby shops are among the stores that can partially reopen. Steve Knutson owns Baker's HobbyTown in Waite Park, Minn.

They sell radio-controlled cars, models and games for kids and adults in what Knutson describes as a "hands-on environment." He has a staff of 15 mostly part-time workers and said he’s not sure how make staffing plans for this new way of doing business.

"So if people are calling in an order or doing it online. and what we’re doing is handing it to them at their car — how many people does that take? Is it half? We just don’t know.">

Knutson said he’s grateful for the income from curbside service, adding that his business might not have survived being shut down another two weeks.

Hair salons can open to sell retail products — but no haircuts just yet.

Sandy Anton owns the Hideaway Salon in Moorhead, Minn. She’ll be in-store Monday, but she’s not anticipating enough business to bring back her three employees yet.

"I don’t expect a big rush. But, you know, I have had people ask if we had product to sell. Now we’re allowed to put that on Facebook and allow that to happen, so I think we’ll make a few sales," she said.

She’s had to direct clients seeking haircuts across the border to North Dakota, which opened salons Friday.

Anton said she hopes to learn from the salons in states that are opening first — to pick up best tips on sanitation practices, as well as how to cut and color hair around a face mask.

Hundreds tuned in to watch Concordia College in Moorhead stream its online commencement ceremony on Sunday.

Graduating senior Elly Schaefer addressed her fellow students from a podium without an in-person audience:

“No matter where each of you are right now, whether you are alone, with family or with roommates, I guarantee it’s not where you thought you would be for your graduation," she said. "In addition to feeling excited about graduating from college, today I also feel sad and lonely. And I imagine that’s the same for many of you.”

After the commencement addresses, the college scrolled the names of each graduating student on the screen, along with their hometown and field of study.

Other Minnesota colleges have also opted to hold graduation ceremonies online, including Winona State, which is holding its digital commencement ceremony later this week.

The Minnesota Department of Health says recent findings suggest some people suffering from stroke symptoms are avoiding going to the emergency room out of fear of exposure to the coronavirus.

Dr. Al Tsai is an epidemiologist with the health department. He said their analysis shows the monthly average for stroke patient visits at Twin Cities hospitals was down about 15-percent in March.

"It's a great concern because if people are not coming in to get treated and seek care, they run the risk of much greater disability and even risk of death from strokes," he said.

The department says the same warnings apply to those experiencing symptoms of a heart attack; they say people with those symptoms should seek medical care.

Health officials in several parts of the country are reporting similar declines in ER visits for non-COVID-19 cases.

The state of Wisconsin has announced a new round of drive-thru COVID-19 testing sites in western and northern parts of the state over the next couple of weeks.

The drive-thru testing is open to any Wisconsin resident experiencing symptoms of the virus.

The nasal swab tests are limited to Wisconsin residents. They are free, and you don't need to be referred by a doctor.

Family's illnesses suggest coronavirus may have been in Minnesota longer than thought: Kate Austin came home from Japan in late January with a strange illness she couldn’t seem to beat. Her arrival caused a chain reaction of sickness among friends and family that ultimately ended in a coronavirus diagnosis.

Businesses scramble to lay plans for partial reopening: More than a month after Gov. Tim Walz issued a stay-at-home order, some nonessential retail businesses will be allowed to partially reopen on Monday, offering curbside pickup or delivery. Those services, however, are easier for some businesses than others.

To read the orignal stories and to see more COVID-19 reporting, follow this link to the MPR News website.  https://www.mprnews.org/story/2020/05/04/latest-on-covid19-in-mn