Gov. Tim Walz discusses reopening the JBS plant in Worthington, Minn., during a press conference inside an aircraft hangar at the Worthington Municipal Airport Wednesday. Walz on Thursday will announce his next steps to restart parts of the economy while continuing to manage the spread of COVID-19.  Photo: Tim Middagh | The Globe
From Minnesota Public Radio News - April 29, 2020

Gov. Tim Walz on Thursday will announce his next steps to restart parts of the economy while continuing to manage the spread of COVID-19. With his stay-at-home order set to expire Monday, officials say expect Walz to renew his call for people to keep their distance and stay out of crowds.

“The guidance to stay close to home and to restrict large gatherings, to restrict close contact with anyone outside of your immediate household, those things are going to stand by,” Minnesota Health Commissioner Jan Malcolm told reporters Wednesday. Wearing cloth masks and being “very careful” in public settings will remain part of the message, she said.

She and other state health leaders said Minnesotans should expect to see the COVID-19 outbreak widen as restrictions are relaxed and testing to uncover the disease intensifies, but they expressed confidence that Minnesota’s health care system was prepared to deal with an expected surge of cases and hospitalizations. 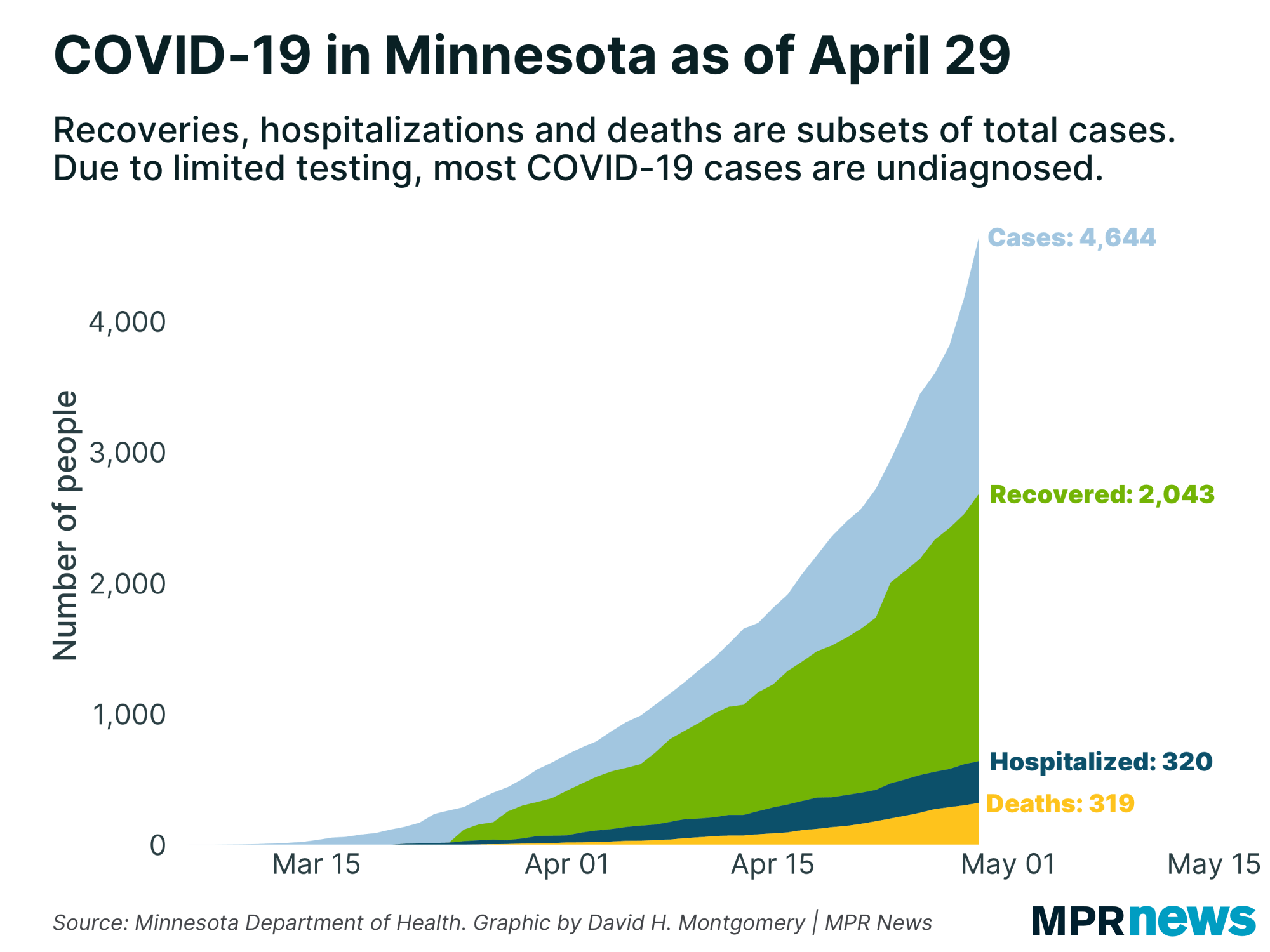 Officials reported 319 deaths up 18 from Tuesday. The grim count now includes the death of a 30-year-old, the youngest victim so far; 320 people remain hospitalized with 119 in intensive care, roughly the same as the day before.

Total cases are now at 4,644 since the pandemic began, 463 more than Tuesday, a huge jump tied to the state’s ramp-up of testing for the disease. That drove down the percentage of patients who’ve recovered to about 44 percent. It had been running at about half.

Of those who’ve died, nearly 80 percent were living in long-term care facilities and 99 percent had underlying health problems officials said.

The disease, said Malcolm, remains “in a growth phase” and Minnesota will continue to see more cases and more deaths.

Nobles County in southwestern Minnesota — home to Worthington and the massive JBS pork processing plant — remains the state’s largest COVID-19 cluster outside the Twin Cities and has vastly more cases than anywhere in Minnesota relative to its population.

Reported cases in the county leaped again on Tuesday to 477 and 615 on Wednesday.

Beyond the ill and unemployed workers, the cascading effects of the shutdown of JBS and of the massive Smithfield Foods pork processing plant in Sioux Falls, S.D., are also hitting pork producers hard. With those plants down, farmers have few places to sell the animals and so are being forced to destroy them, Minnesota Agriculture Commissioner Thom Petersen said Monday.

At a Wednesday press conference that included Walz, Minnesota DFL U.S. Rep. Collin Peterson said state officials together with JBS executives and union leaders would be working on a plan that would allow the plant to reopen while keeping workers safe and tested as they enter.

Peterson said nearly 500 JBS workers have tested positive for the coronavirus, about 20 to 25 percent of the plant’s workforce. 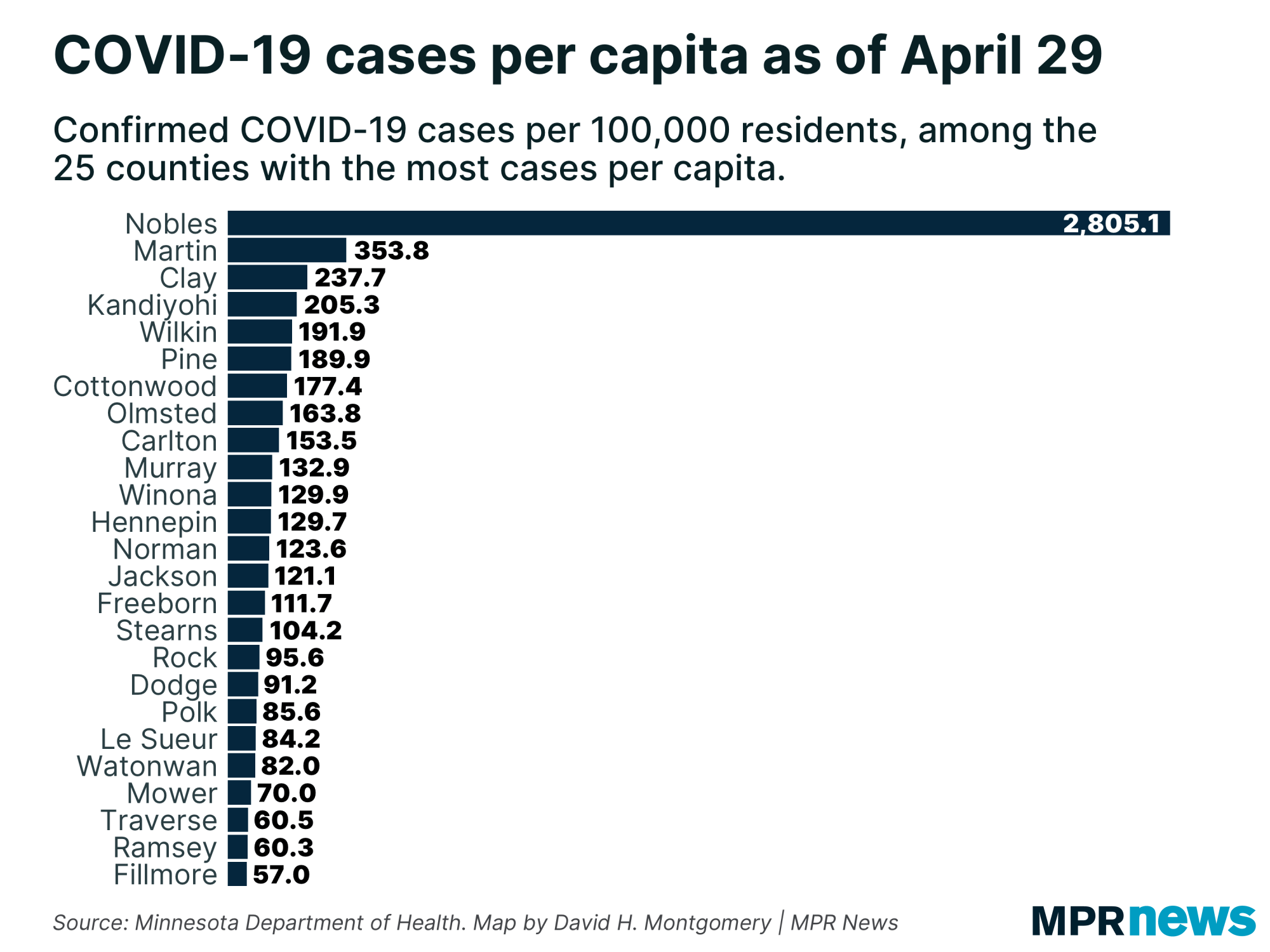 “We’re about three weeks away from not having pork on the shelves in the grocery store,” said Peterson. “Maybe that’ll wake people up. It’s a national security issue. The United states has got to have a food supply we can depend on.”

Restarting JBS, he said, would require slowing down the hog processing and spacing out workers on the line with shields between them. JBS is “not going to be able to run the way they did before, process 21,000 hogs [daily] like they did before,” but it was critical the plants be able to operate on some level, he said. 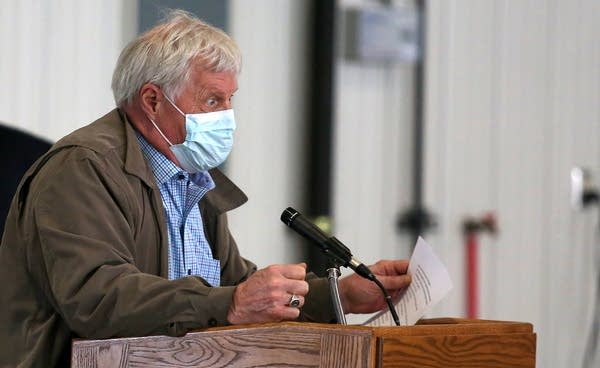 U.S. Rep. Collin Peterson speaks at a press conference in Worthington about JBS and its help in euthanizing hogs for area pork producers. Photo: Tim Middagh | The Globe

Peterson added that U.S. Agriculture Secretary Sonny Perdue told him Wednesday morning that the JBS and Smithfield plant reopenings were a top priority and that he wanted JBS running in two or three days.

“I agree with him, but I’m not sure what the timeline is,” Peterson said.

One of the reasons producers are reeling: Right now, they can’t be compensated for destroying healthy animals, Peterson said, adding that he would push legislation to change that.

Kandiyohi County in west-central Minnesota is also seeing cases jump a week after officials with the Jennie-O turkey processing plant said some employees had tested positive for the coronavirus.

A week ago, Kandiyohi County, where the Willmar plant is located, had confirmed three COVID-19 cases. On Wednesday, the Health Department reported 88 people have now tested positive. 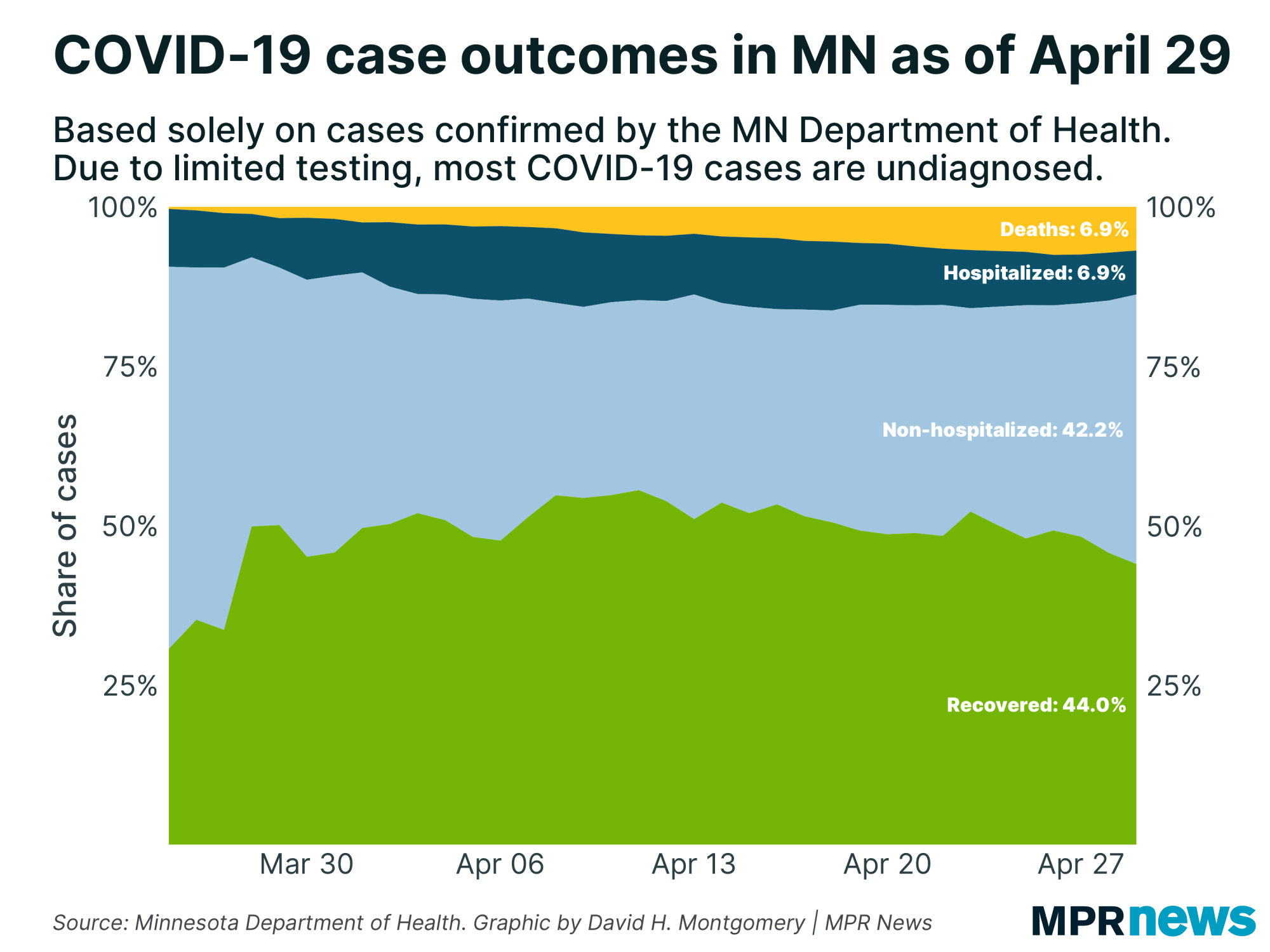 The economic fallout from COVID-19 extends far beyond agriculture.

Some 564,000 Minnesotans have applied for standard unemployment benefits since the middle of March, officials said Wednesday, although the pace of applications is slowing.

There have also been 40,000 independent contractors or self-employed people who have been paid so far through a special pandemic unemployment insurance program, said Steve Grove, commissioner of the Department of Employment and Economic Development.

Grove said officials understood the pressure small businesses were under now and how it doesn’t seem fair to see a small business shut while some big-box stores remain open.

Grove declined to say if hair salons would be allowed to reopen or dining-in at restaurants would be permitted as part of Walz’s coming next steps. But he said person-to-person contact is “trickier” to manage safely than someone coming to a store, picking up something and leaving.

As some industries begin to reopen in Minnesota, the state’s IT Services has built a new screening app to help businesses keep tabs on their employees’ health. IT Commissioner Tarek Tomes said each employee’s temperature is taken at the beginning of their shift, then they’re asked whether they’ve had a fever in the last week, shortness of breath or a cough. The anonymous data is graphed over time.

Walz is expected to use his Thursday afternoon announcement to lay out how more sectors of the economy can reopen with conditions.

The governor has made it clear that places that depend on public crowds, including bars, eateries and big sporting events, will be the last ones to return to normal business operations.

He reiterated that while speaking to reporters Wednesday in Worthington — although he also suggested that small-town Minnesota businesses may be close to getting the green light to conditionally reopen.

Noting that he was in Worthington to meet with officials to talk through ways of safely restarting the massive JBS pork plant, the governor said if they can figure out how to get a massive hog operation at least partially back online in the COVID-19 era, they ought to be able to find a way to let Main Street hardware stores reopen.

The county started the week with 55 positive cases of COVID-19. In two days, that number more than tripled, to 166. Health officials say the spike is a result of increased testing focused on hotspots in the county.

Those include two poultry plants, Pilgrim's Pride in Cold Spring, Minn., and Jennie-O Turkey in Melrose, Minn., where an undisclosed number of workers have tested positive for the virus.

County Public Health Director Renee Frauendienst said staff have been reaching out to sick workers to provide testing and information.

"What we're trying to do is get in touch with all those people, so that we can talk with them to make sure they understand what isolation and quarantine measures they need to take in order for us to prevent the spread,” said Frauendienst.

Jennie-O says it will pause its operations in Melrose to undergo a facility-wide cleaning.

Several more county boards granted waivers this week to the usual May 15 filing deadline for the year’s first property tax installment. An Association of Minnesota Counties tally lists 24 of 87 Minnesota counties that have done so to date.

While the terms vary by county, most give people until July 15 to pay their homeowner or commercial taxes. Some are still requiring those using escrow accounts to pay on time and others are limiting the exemption to bills of less than $100,000.

The extensions will give more time to pay before penalties and interest kick in, although some counties are not reducing penalties entirely. There are places where businesses and residents must prove they are impacted by COVID-19 to qualify.

The state’s regional universities and two-year colleges are considering how to respond to COVID-19 when classes resume later this year.

Administrators are mapping out summer classes and the start of a new academic year in the fall, and are imagining three scenarios, said Devinder Malhotra, chancellor of the Minnesota State system, said Wednesday.

“One is the scenario most optimistic — one off minimal disruption — and the second scenario is that social distancing and other safety protocols would still be in place; and then the third scenario we are planning for is another or re-infection,” he said.

Malhotra said that even before the COVID-19 outbreak, nearly a quarter of classes were already online. That number is close to 95 percent now, with only some hands-on requirements left.

Minnesota’s coronavirus response team has signed a lease for a community care site in Roseville.

Officials on Wednesday formally announced the lease agreement with Presbyterian Homes and Services to utilize Langton Place as a site to provide low-level medical care or monitoring should it be needed if hospitals become overwhelmed in the pandemic. 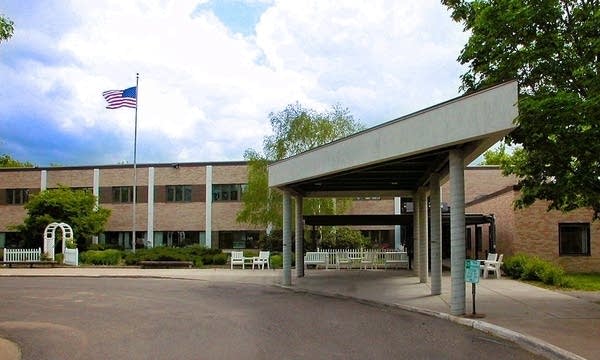 This is the first alternate care site to move forward.

The Walz administration has freed up almost $2 million for costs associated with it.

Patients could be transferred to the Roseville location to free up hospital space for COVID-19 care.

As this historical moment unfolds, Historical Society is taking notes: The COVID-19 pandemic is destined to be part of history, and historians are collecting artifacts in real time.

Duluth projecting 'absolutely catastrophic' budget shortfall: The city’s coronavirus response and an expected drop in tax revenue could put the city $38 million in the red. That represents about 40 percent of its general fund. Mayor Emily Larson on Wednesday spoke with MPR News host Tom Crann about the city’s budget deficit and response to the pandemic.

Pence forgoes mask on Mayo Clinic visit to learn about testing 'moonshot': The vice president was at the clinic to learn about a new coronavirus testing “moonshot” that has the famed clinic partnering with the state and its flagship university to quickly boost the state's capacity to 20,000 tests a day.

To read the original article and see related COVID-19 reporting, follow this link to the MPR News website.  https://www.mprnews.org/story/2020/04/29/latest-on-covid19-in-mn