COVID-19 signage at the employee entrance of JBS USA plant. The state’s agriculture commissioner said Monday some hogs and poultry must be euthanized because COVID-19 has shut down several large processing plants.  Photo: Aaron Lavinsky | Star Tribune via AP file

Minnesota’s COVID-19 toll climbed again Monday as the economic fallout from the disease continued to reverberate.

The latest on the economic pain came from Minnesota Agriculture Commissioner Thom Petersen, who told reporters that hogs will need to be euthanized because COVID-19 forced several large regional processing plants to shut, leaving local producers with nowhere to ship tens of thousands of hogs weekly. He called it a “very precarious situation.”

Consumers may also see higher meat prices, although the "food supply is stable,” he added.

His comments came hours after the Health Department reported14 more Minnesotans had died from COVID-19, pushing the death toll to 286. Nearly 300 people are in the hospital currently with 122 in intensive care, seven more than Sunday. 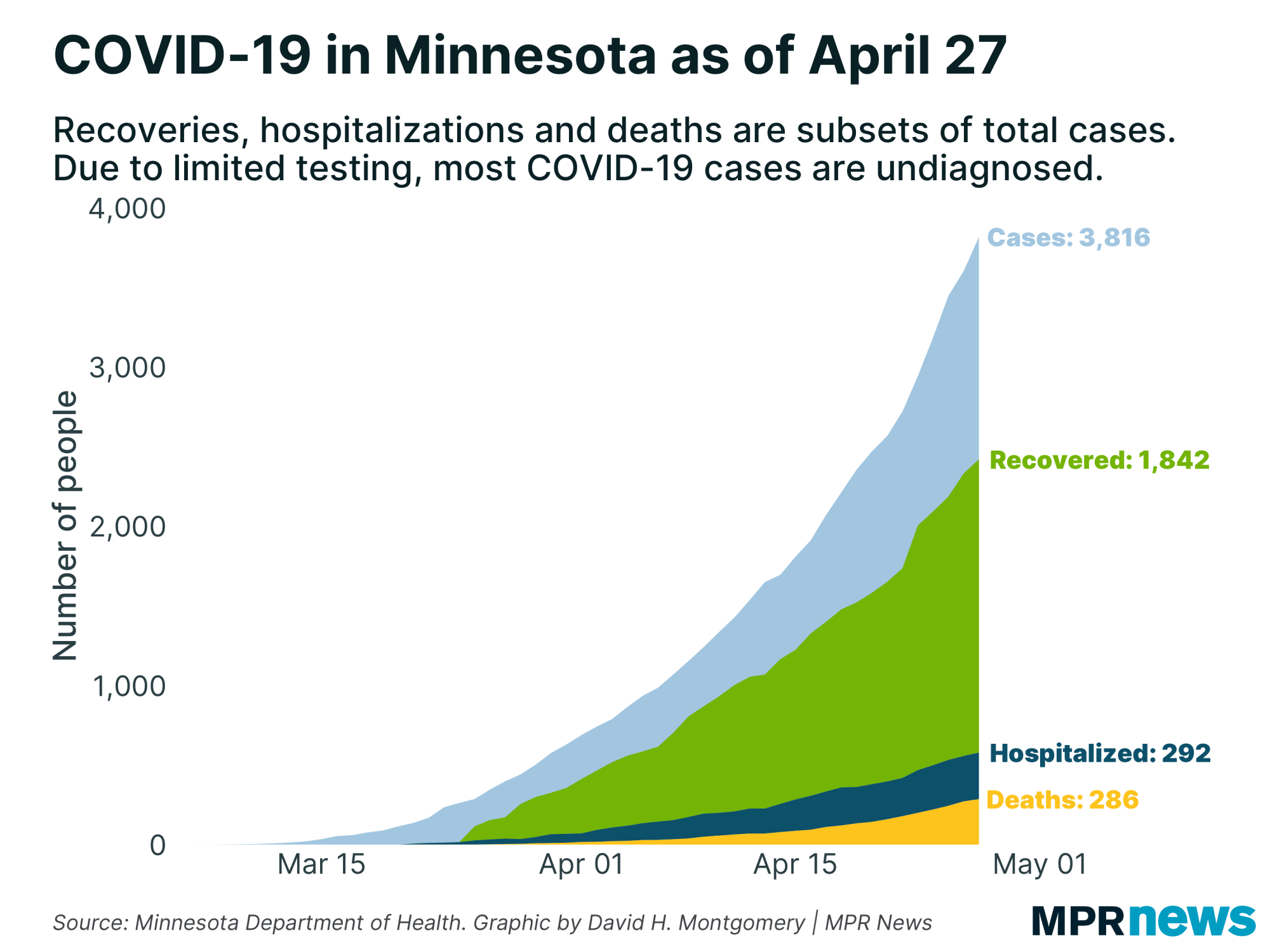 The average daily death toll is doubling in about a week’s span, an indication that the state hasn’t yet reached the peak of the pandemic — let alone a two-week decline that federal health officials say is a sign restrictions can be significantly eased.

Most of the people who have died were living in long-term care facilities; 8 in 10 were age 70 or older, according to Health Department data.

State officials have been bracing Minnesotans to see more cases surface as a massive testing effort ramps up. Hospitalizations and deaths may also continue to rise as an expected summer surge approaches.

The largest COVID-19 cluster outside the Twin Cities continues to be in Nobles County, where the outbreak centers around the now-shuttered JBS pork processing plant in Worthington.

On Sunday, the county had 352 confirmed cases of COVID-19 — up from 258 on Friday and just two cases the week before last. On Monday, total positives jumped again, to 399. 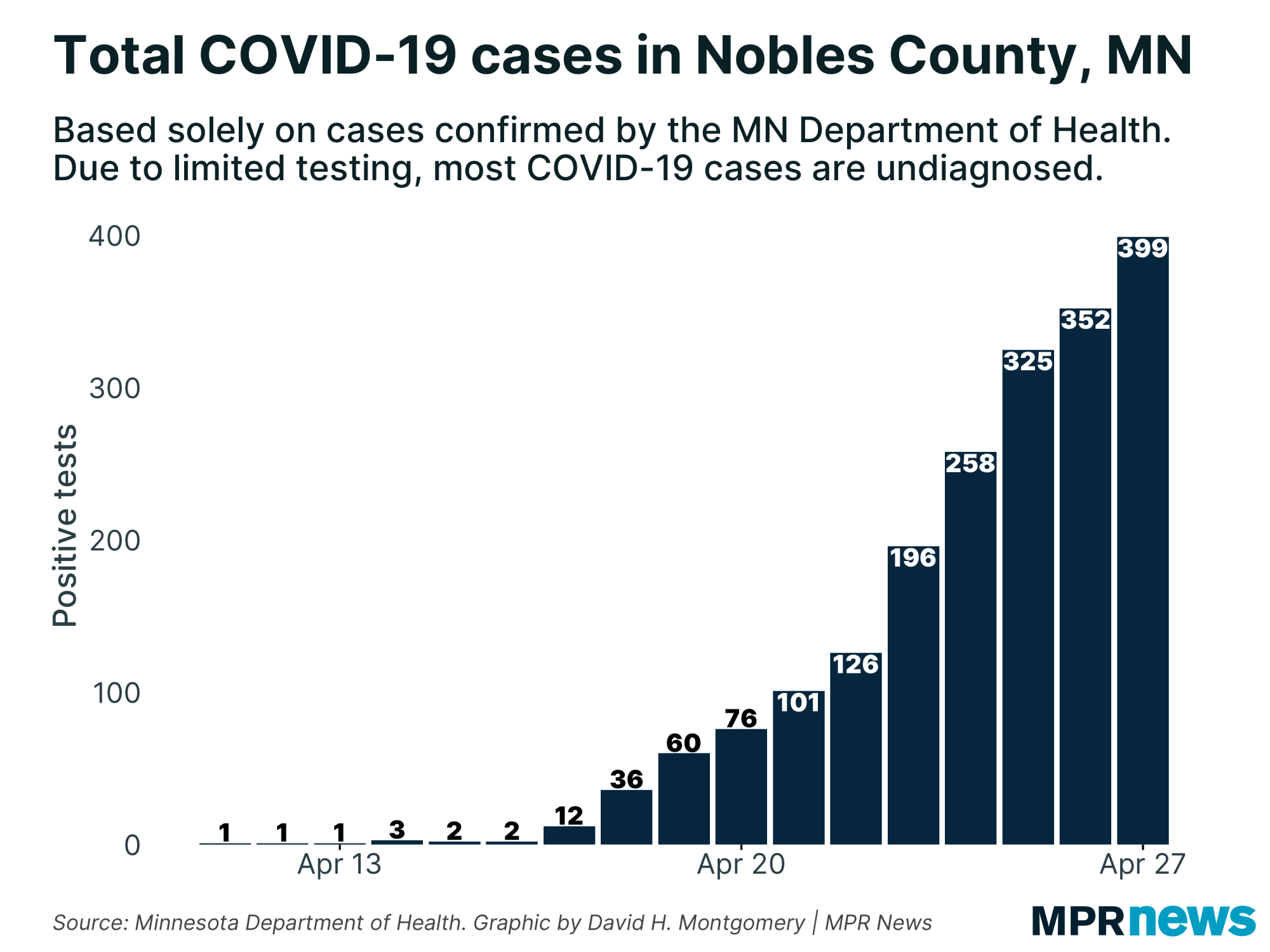 Nobles has by far the largest outbreak relative to its population. 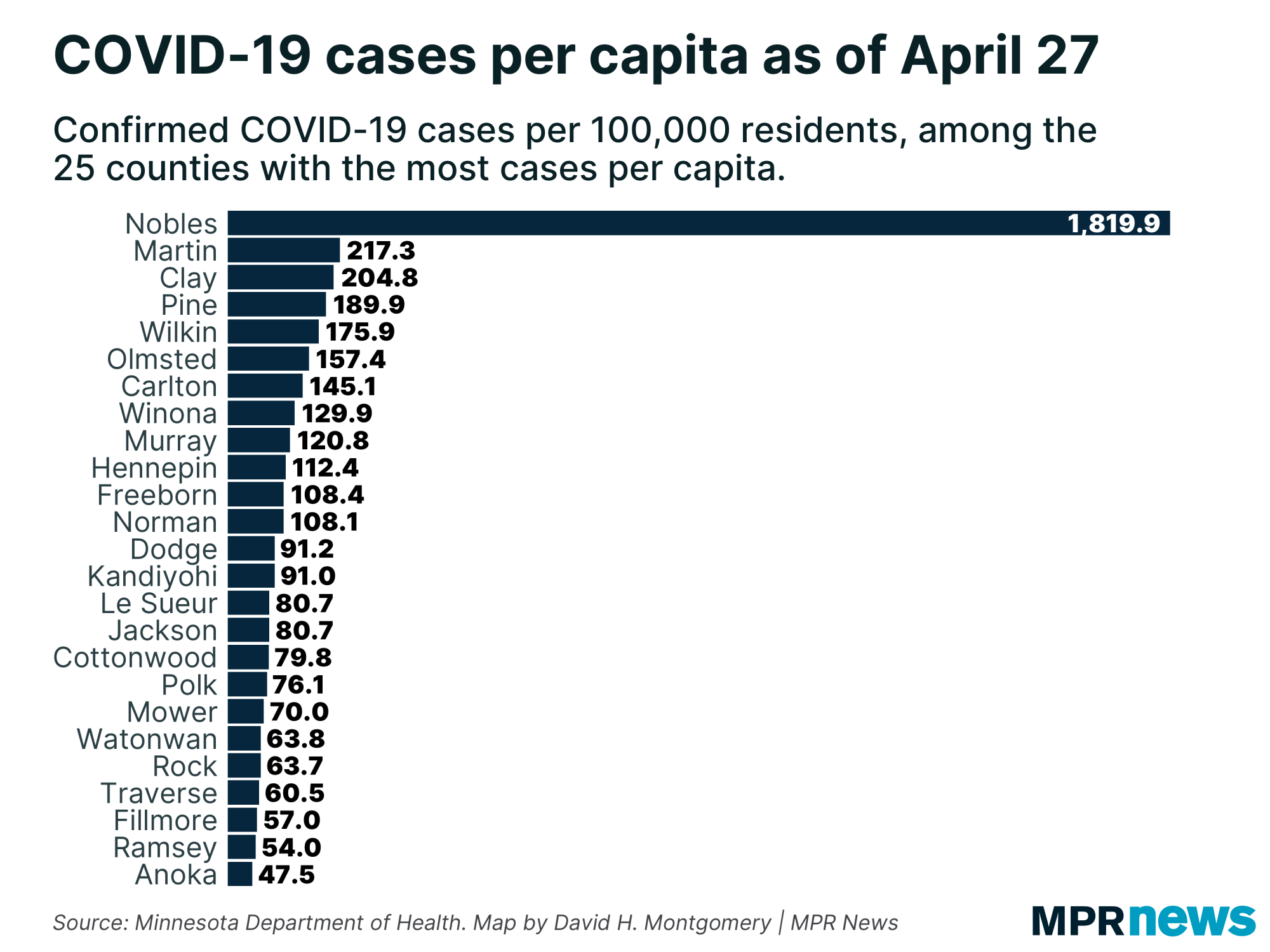 Cases are also surfacing at the Jennie-O turkey plant in Willmar, in west-central Minnesota. On Thursday, 14 of more than 1,200 workers had tested positive, but that number is expected to increase. The plant’s operators said Friday it would close both Willmar plants.

With major hog and turkey operations in southwestern Minnesota and South Dakota idled by COVID-19 and unable to process animals, officials were “looking for homes” at smaller processors for 100,00 to 200,000 hogs a week, said Petersen.

"The decision to euthanize animals is very emotional,” he said.

The Health Department on Monday reported 214 new positive tests for the disease. Of Minnesota’s 3,816 cases since the pandemic began, just under half of those confirmed with COVID-19 have recovered to the point they no longer need to be isolated.

Officials have said repeatedly that the number of positive tests is only a sliver of the Minnesotans who likely have the coronavirus.

Gov. Tim Walz last week unveiled plans for a massive testing effort that would be able to test as many as 20,000 Minnesotans a day. But while testing is increasing, current numbers show only a fraction of that daily testing still taking place.

Health Commissioner Jan Malcolm said Monday that the laboratories and health care providers were still dealing with “logistical issues” tied to the ramp-up but that officials were still shooting to complete 5,000 daily tests by next week.

Thousands of manufacturing, industrial and office workers could be back to work as soon as Monday in Minnesota after Walz unveiled a set of standards last week to permit manufacturers, and other businesses that aren’t customer-facing, to restart and let employees return to work.

Even as businesses get the OK to return to their buildings, it’s not clear how quickly they’ll move.

"What we're basically hearing from the largest employers to the smaller-size employers is that they're going to move pretty cautiously. They're still working through their own internal protocols about how they would invite people back into the office,” said Steve Cramer, CEO of the Minneapolis Downtown Council.

Walz will announce this week whether he’ll continue or end his stay-at-home order that runs through May.

The same goes for restrictions on bars, restaurants and other entertainment venues that have been closed to all but takeout and delivery since the middle of March. 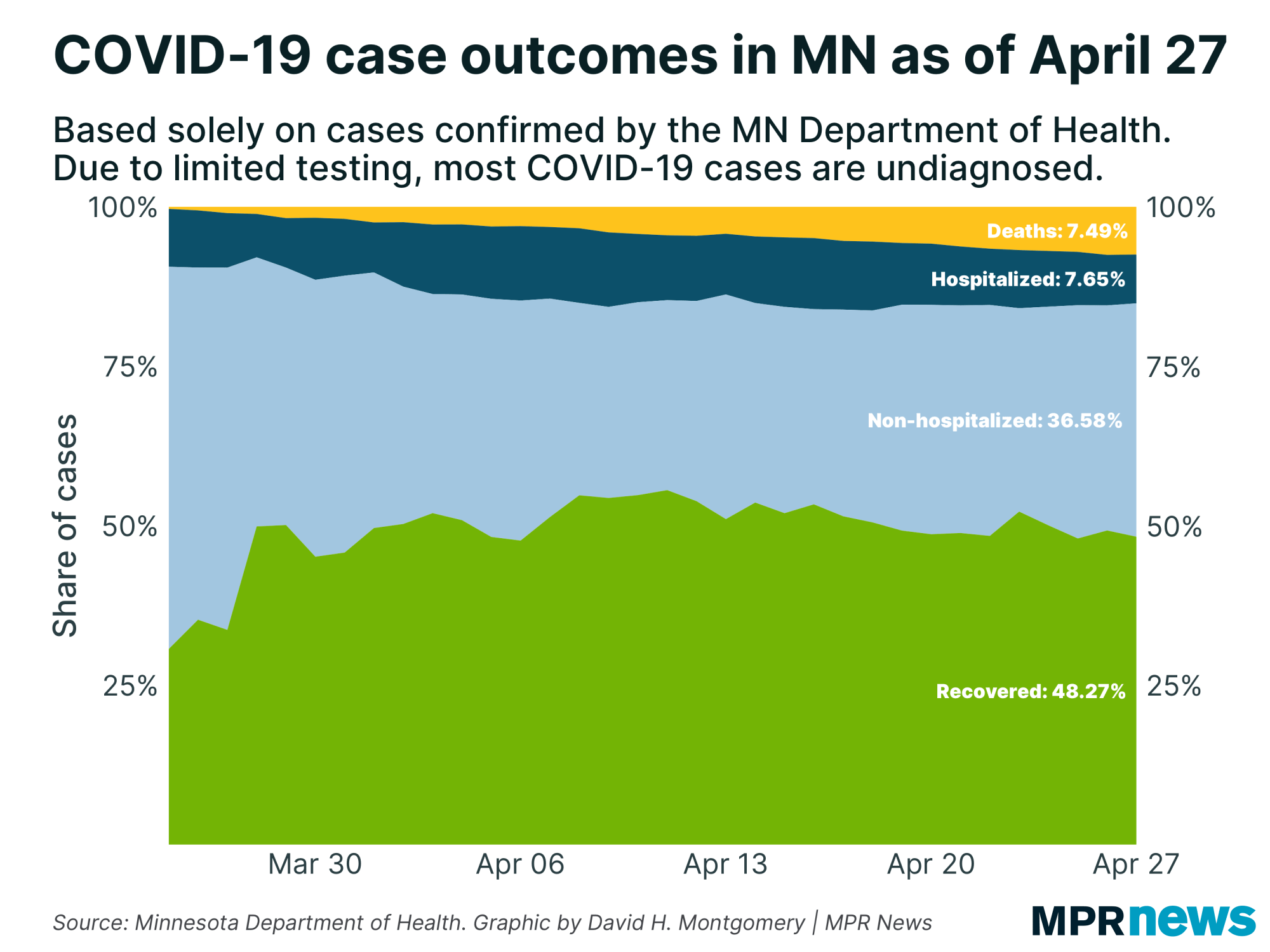 Both sets of curbs are due to end next Monday, barring extensions. Right now travel that isn’t considered essential is still discouraged and workplaces that aren’t explicitly exempt should stay closed. And for now people can’t get a drink or a bite to eat in a restaurant, only to-go.

But even as factory and some office workers return to their job sites this week, Walz has made it clear that places that depend on public crowds, including bars, eateries and big sporting events, will be the last ones to return to normal business operations.

The coronavirus outbreak has exacerbated issues that Minnesota’s most vulnerable populations already face.

Jack Loftus is co-founder of Southside Harm Reduction Services in Minneapolis, which works to improve the safety of people who use injection drugs.

Loftus said they’ve ramped up their street outreach to people who live outside in camps, as they continue to face the same housing and health disparities they faced before the outbreak.

"With coronavirus now, everything’s on telehealth, and so for people who don’t have phones or don’t have laptops or don’t have access to internet in a private place... maybe the place you use internet is at a McDonalds," he said. "You don’t want to do your mental health therapy appointment in a McDonalds."

Coronavirus may cause financial harm to churches

The economic fallout from the pandemic is expected to have a major impact on church donations. And Minnesota faith leaders say it could be especially hard for smaller parishes that play prominent roles in serving low-income communities.

Pastor Curtiss DeYoung heads the Minnesota Council of Churches, which works with several denominations. He said that for some of those smaller churches, it isn't just parishioners being out of work that's affecting donations. Lack of technology is a problem, too.

"One of the prime ways that local congregations collect income is through passing the plate on Sunday morning. And smaller congregations, in particular, have not had online methods of giving," he said.

DeYoung said the situation raises questions of whether some churches will be able to survive the crisis.

Bessler was hospitalized in March and tested positive for COVID-19. He has since recovered.

He donated plasma, potentially filled with antibodies to help fight the coronavirus, to Mayo Clinic.

Mayo is researching how that plasma could be used to treat patients with COVID-19.

“I was proud to be one of the first participants in this innovative treatment program at the Mayo Clinic,” Bessler said in a news release. “I encourage all others who have recovered from COVID-19 to also consider donating their plasma to help develop potential remedies to this virus that is impacting so many people across Minnesota and the country.”

The Minnesota Department of Corrections is reporting a spike in COVID-19 cases at a boot camp in Willow River.

On Wednesday, the Corrections Department reported 15 cases at the Challenge Incarceration Program in it's Willow River facility in northeastern Minnesota. On Friday, the number of confirmed cases jumped to 40; seven others are presumed to have it. And there are 12 tests still pending.

That means about one-third of all the residents at Willow River — about 140 inmates — have COVID-19. And nearly all the 43 cases reported in Pine County are at the Corrections Department campus, which hosts a program for nonviolent offenders with substance abuse histories.

Family members have complained about a lack of social distancing in the facility. They also say the department was slow to require that staff wear masks.

The Corrections Department said it's implemented a number of measures to minimize the impact of COVID-19. It also said it's increased testing, especially at Willow River and the prison in nearby Moose Lake.

Minneapolis to take down, close some park amenities

Minneapolis parks officials say they will take down or block basketball rims and modify other park amenities because too many visitors aren't following social distancing rules.

In a statement, Superintendent Al Bangoura said the board has put a lot of effort into trying to educate visitors about social distancing. Recently, the board posted signs on and around basketball courts warning players that if large, unrelated groups kept using the courts that the rims would come down.

Parks officials say they will also take down tennis court nets, close playgrounds and block access to skate parks in Minneapolis. Signs will be posted in picnic areas limiting gatherings to 10 people or less. The parks themselves will remain open.

The city of St. Paul took similar measures in its parks earlier this month.

Already on the margins, homeless students hit hard by shuttered schools: When classrooms closed to slow the spread of the new coronavirus, the disruption left teens experiencing homelessness without the stability, routine and support of school. It has forced them to navigate distance learning on their own while also dealing with the trauma that homelessness brings.

Pandemic puts summer camps in a quandary: Summer camps around the state are trying to figure out whether they can operate this year — and if they can, what they may have to do differently to keep campers and staff safe from the coronavirus. That’s putting parents and kids in a tough spot, as they try to plan their summers.

Minnesota’s schools won’t reopen this academic year. Here’s what you need to know: Students across Minnesota have been out of the classroom since the middle of March — first on an extended break, then studying from home in distance-learning mode — because of the COVID-19 pandemic. And they won’t return this academic year.

Social distancing is working in MN — but only if we keep it up: A new data analysis of the coronavirus outbreak by the University of Texas suggests that Minnesota’s social distancing efforts might be paying off in its response to COVID-19 — but it also implies that even bigger outbreaks might lie ahead if those social distancing practices were to end.