Gov. Tim Walz provides an update on the state's response to COVID-19 during a news conference on Monday in St. Paul. Walz relaxed some business restrictions Thursday, but closed schools for the remainder of the year. Photo:  Scott Takushi | Pioneer Press via AP, Pool

Minnesota’s COVID-19 death toll climbed to 221 Friday, up 21 from Thursday, as the number of total confirmed cases topped 3,000 for the first time. Current hospitalizations and intensive care cases also rose.

Death and case counts have been sharply higher all week and are expected to continue surging.

The latest numbers come a day after Walz relaxed some business restrictions but kept school buildings closed and raised doubts about the Minnesota State Fair opening in August.

Walz is still evaluating how long to keep Minnesota’s stay-at-home order in place. The current restrictions on non-essential travel and activities are in place until May 4. 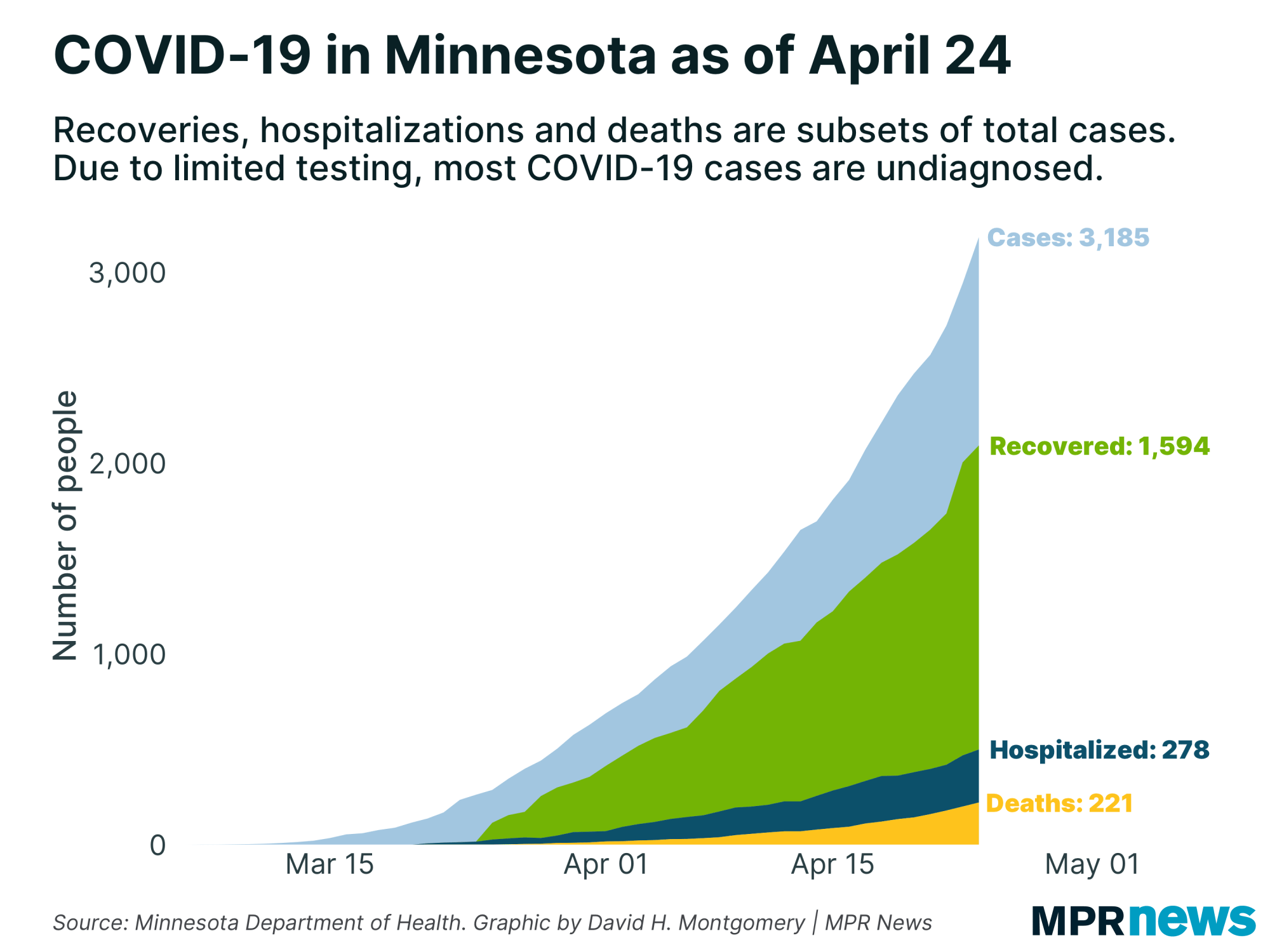 The DFL governor has been gradually allowing more exceptions. Up to 100,000 employees will be able to head back to factories or office buildings on Monday. But Walz said expansions in the capacity to test, trace and isolate around COVID-19 will determine how fast other elements of society can reopen.

“Opening up recklessly will only make things worse. Opening up without a plan will make things worse,” Walz said on a call Friday with mayor and other local officials. “But hunkering down and doing nothing will cause that pain, as I talked about yesterday, that makes it impossible to move forward.”

Other states are further along in resuming retail activities but Walz said he won’t put public health at risk to speed a reopening.

While Walz did offer some optimism Thursday, including the relaxed business guidance, he also signaled that Minnesota was still not close to allowing the return of people in packed public spaces, including crowded bars, restaurants or major sporting events and warned of a coming surge in COVID-19 cases as testing ramps up dramatically.

Friday’s Health Department report counted 3,185 positive tests across Minnesota for the virus since the pandemic began, with half of those patients recovered to the point they no longer need isolation.

Nobles County continues to have the largest cluster outside the Twin Cities and Rochester, with the outbreak centering around the JBS pork processing plant in Worthington.

On Monday morning, company executives announced they were indefinitely shutting the plant, which employs some 2,000 workers, to try and get control of the situation.

Cases there continue to multiply rapidly. On Friday, the Health Department said Nobles County now has 258 positive tests for the disease, up, 70 from Wednesday. It had just two cases last week.

Nobles County has the largest outbreak by far of any county in the state relative to its population. 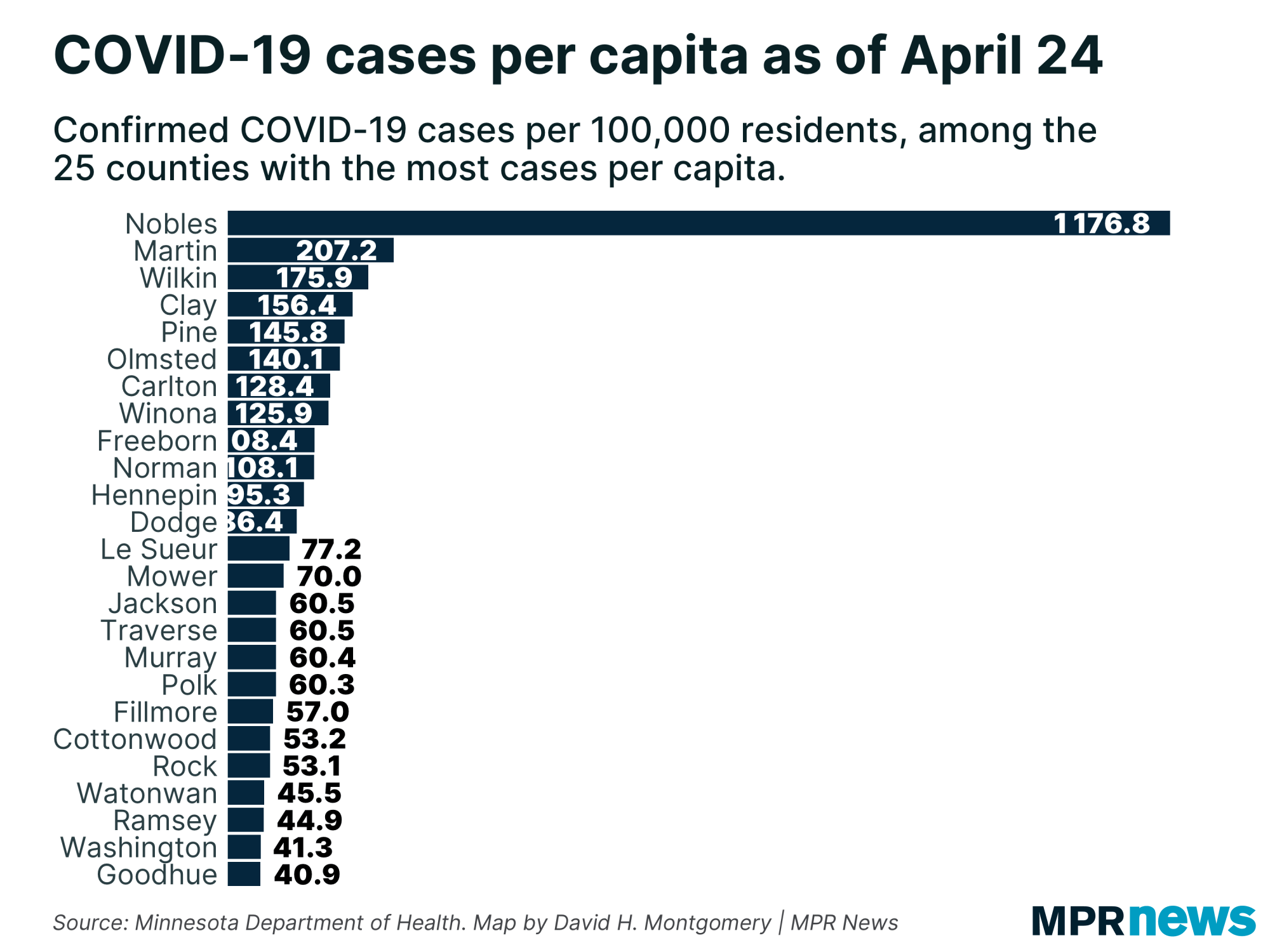 Cases have also surfaced at the Jennie-O Turkey Store operations in Willmar, in west-central Minnesota. On Friday, the Hormel Foods subsidiary said it would close its Willmar Avenue and Benson Avenue facilities, both located in Willmar, out of an “abundance of caution.”

The turkey processing plants will be cleaned and sanitized, and employees will continue to receive all base pay and benefits during the shutdown.

As of Thursday, 14 of more than 1,200 workers had tested positive for COVID-19, the company said. Health experts have told the company that as testing increases so will positive results.

Employees could begin returning as soon as next week at some manufacturers and businesses that aren’t customer under new protocols that Walz released Thursday.

However, the workers’ returns would be contingent on employers having safe-distance, sanitizing and other protocols in place and enforced.

Part of the new executive order could impose up to $25,000 penalties on businesses that retaliate against workers who raise health or safety concerns.

Thousands of businesses could get back to work under the new protocols. However, it won’t help those that depend on customers and crowds — leaving behind struggling restaurants and bars, among others.

Hospitality Minnesota, a trade group, has given Walz a list of safety protocols for reopening.

Some restaurants and bars are doing curbside and takeout orders. But for some, adapting wasn’t possible or lucrative enough, said Liz Rammer, president of Hospitality Minnesota. “Some have closed permanently, and some have closed temporarily.” 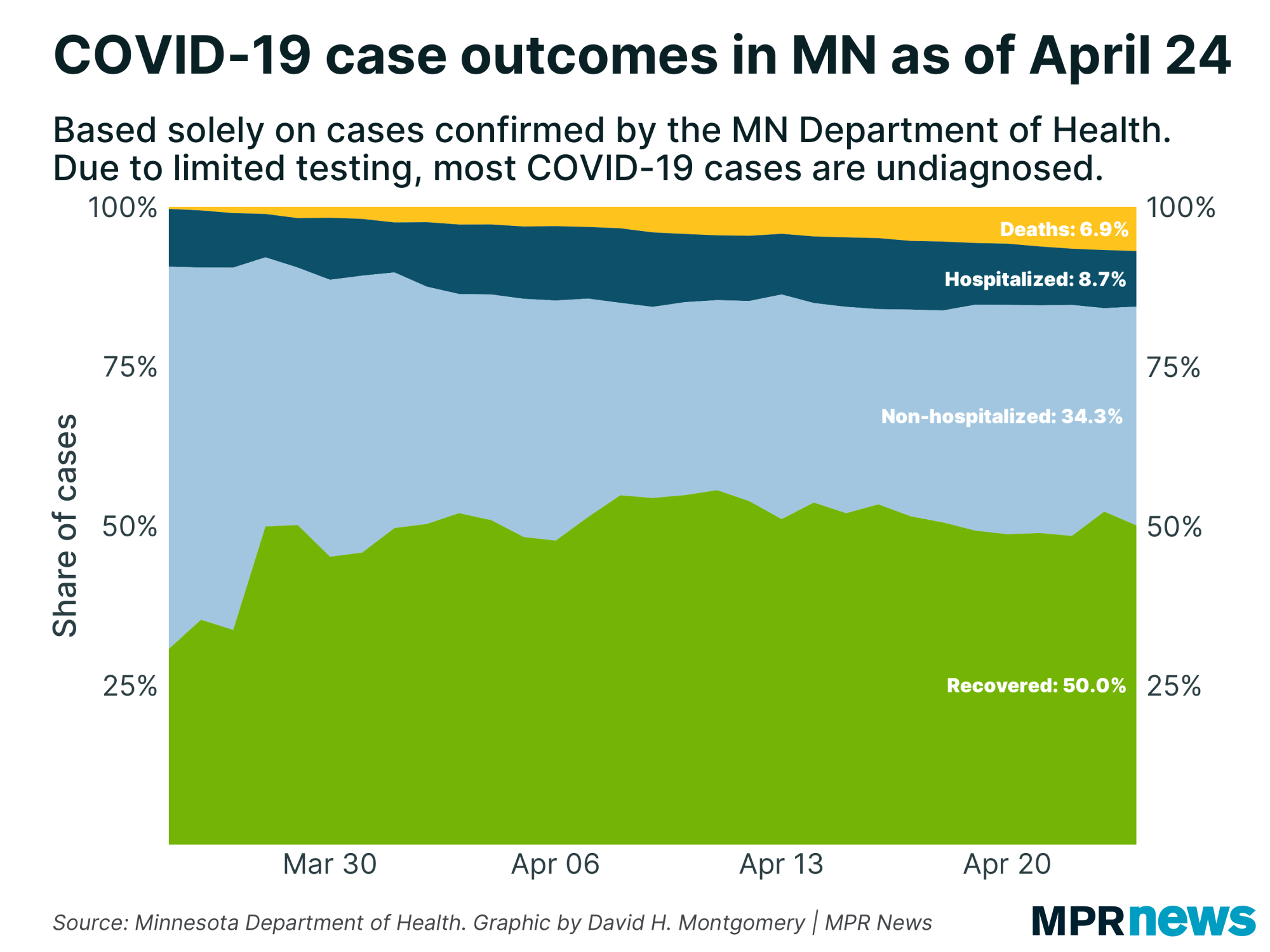 While 100,000 Minnesotans could get back to work next week, public school buildings will remain closed for the remainder of this school year — a decision that Walz and Lt. Gov. Peggy Flanagan on Friday described as incredibly difficult.

“I know there are a lot of tears shed over this” among students and families, Walz said.

He and Flanagan also acknowledged that many Minnesotans do not have the broadband access and other technical means to make distance learning work. The pandemic has “laid bare the inequities that have already existed in our state," said Flanagan.

Friday’s briefing call with the governor and state leaders also included students and teachers who’ve been struggling to deal with the loss of face-to-face classroom contact.

A Twin Cities math teacher on the call said the COVID-19 crisis has brought racial and ethnic disparities in education into a harsh spotlight. Many of her students, she said, are unable to stay in touch or do homework; others have become full-time caregivers for their families, she added.

As part of the governor’s new plan to team up with Mayo Clinic and the University of Minnesota and launch a massive new testing effort in Minnesota, Walz’s office on Friday unveiled a new website offering citizens information on and where to get tested and how to obtain the results.

Testing in Minnesota and elsewhere has been hampered by supply chain issues and materials shortages. Minnesota has tested about 1,200 or so people daily as of late. That’s only about one-quarter of the testing Walz says is needed.

For weeks, Walz has said that drastically increased testing would be critical to restarting parts of the economy. Two kinds of tests, ones that diagnose COVID-19 and others that see if a person has been exposed to the virus, are included in the plan, along with increased tracing.

While the plan to test 20,000 people a day would make Minnesota No. 1 in the nation for testing, Walz said testing alone would not end the crisis.

Walz on Friday also said that unemployment benefits have begun going out to self-employed Minnesotans, people who typically do not qualify for such aid but who are receiving payments in the economic fallout from COVID-19.

More than 450,000 Minnesotans — about 14 percent of the state’s overall labor force and twice the total number of applicants filing during all of 2019 — have filed applications for unemployment aid over the past few weeks.

Social distancing is working in MN — but only if we keep it up: A new data analysis of the coronavirus outbreak by the University of Texas suggests that Minnesota’s social distancing efforts might be paying off in its response to COVID-19 — but it also implies that even bigger outbreaks might lie ahead if those social distancing practices were to end.

Matching health workers with peers to ease stress of fighting pandemic: People who treat patients with COVID-19 face serious challenges to their mental health — from sadness for their patients to worries about their own safety. A new program at the University of Minnesota is trying to address that by connecting health workers with a buddy.

Even knowing the risks, some counties want tourists back: The governor’s response to COVID-19 has brought the tourism industry close to disaster, some officials say. Three Minnesota counties passed resolutions Tuesday, asking Gov. Tim Walz to lift his state-wide stay-at-home order and allow businesses to reopen, despite growing numbers of COVID-19 infections.