Minnesota put $200 million into a COVID-19 fund. Where is it going? A mobile ventilator sits in a hallway at Bethesda Hospital in St. Paul on March 26, 2020.
Evan Frost | MPR News file

Minnesota procurement officials are working to scoop up personal protective equipment and other supplies to respond to the coronavirus pandemic. Purchases are occurring at a rapid clip since the Legislature freed up $200 million for Gov. Tim Walz’s administration to spend — and that’s by design.

“The difference between securing lifesaving equipment and supplies, or losing out to more nimble entities, is often a matter of hours, not days,” the Department of Minnesota Management and Budget wrote in an initial report on spending between late March and the middle of April.

The report’s authors add, “The state must have the flexibility to make fast, informed procurement decisions to secure the equipment and supplies needed for our health care providers, first responders and others who provide critical services during this public health emergency.”

Ecolab CEO Doug Baker joined Walz at a press conference this week to underscore the importance of the mission. He’s helping coordinate procurement efforts within the private sector, working closely with Commissioner Alice Roberts-Davis at the Department of Administration.

“Because if you don’t have PPE and you don’t have this stuff figured out and the reserves right, it’s very hard for the governor and team to give a go-ahead ultimately to reopen the state,” Baker said. About 40 percent of the available money was authorized to be spent as of April 14, according to MMB’s inventory. Yet only $32 million had actually been spent.

A 10-member panel of the Legislature — with equal members from both chambers and both parties — must be consulted on COVID-19 expenses of $1 million or more. The panel has 24 hours to weigh in, and the spending is stopped only if a majority from each chamber disapproves.

So far only a single legislator pushed back on a single request, not enough to derail it. Republican House Minority Leader Kurt Daudt objected to a plan to use $2.25 million for the Department of Corrections.

The corrections spending approved in early April goes for overtime costs and use of outside nursing agencies, protective equipment, washing stations, distribution of hand soap to every prison inmate, free phone or video visitation and more.

“DOC has halted all in person visitation. In other countries, these conditions have resulted in significant prison unrest,” Corrections Commissioner Paul Schnell wrote in the request, estimating the visitation services at $176,000. “Allowing limited but free video visiting for offenders is critical to prison safety.”

In an interview Tuesday, Daudt said he supported portions of that request but was uncomfortable with the inclusion of staffing costs.

“I want to make sure that the money we’re spending there is to keep those people safe and that we’re not covering any additional hours or things that wouldn’t be necessary,” Daudt said. “I have no evidence that there was a request for things that weren’t necessary. But had they paid for them out of their own budget and then come to the Legislature for a deficiency request from the COVID-19 fund, we would have an exact accounting of how much was spent.”

Speed is of the essence on the acquisitions. In an April 2 request form to acquire up to $7 million in non-latex gloves, there’s clear urgency reflected.

“We have an immediate opportunity to purchase 10 million gloves for $1.3 million before noon tomorrow,” the request reads, adding that the rest of the money will be used as opportunities for more purchases arise.

Minnesota hospitals are going through 600,000 to 1 million gloves per day, resulting in expected demand of 50 million gloves in the coming weeks, according to the request.

“Marketplace conditions are changing rapidly,” warns another request, noting that other entities are competing for the same materials and supplies are dwindling quickly. 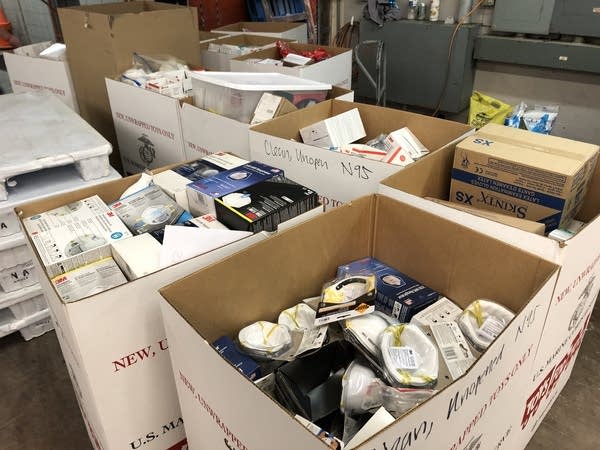 Some of the items purchased, including N95 respirator masks, could be eligible for 75 percent Federal Emergency Management Agency reimbursement later. State leaders won authorization to purchase up to 4 million masks in all, which have been priced at $2 to $4 each.

Ventilators were priced at $25,000 to $80,000 per device with fierce competition for each. “A purchasing decision will likely need to be made within the same day, if not within the same hour of identifying a vendor with any amount in stock,” a request for $31.5 million in authorization read.

The procurement team is tapping into locally based companies for some of the supplies. The report notes that some have come from Ecolab, 3M Co. C.H. Robinson, Patterson Companies Inc., the Toro Co. and Donaldson Co. How much each has received isn’t documented.

Roberts-Davis, the Walz administration’s point person, said companies are supplying both equipment and their logistics teams to help find the right gear at the right price. She said 3M steered the state away from a vendor selling counterfeit respirator masks.

“Over the past three weeks, we’ve been leveraging our traditional supply chains but also had many Minnesota businesses step up” she said. “Some small businesses that pivoted from their normal operations to assist the state.”

To read the original article and see related COVID-19 reporting, follow this link to the MPR News website.   https://www.mprnews.org/story/2020/04/21/minnesota-put-200-million-into-a-covid19-fund-where-is-it-g...