A coronavirus outbreak at Sauer Health Care in Winona, Minn., has killed several residents and infected others. Healthy residents at Sauer have been transferred to nearby Lake Winona Manor.   Photo: Mark Vancleave | Star Tribune via AP

Gov. Tim Walz briefed reporters Wednesday afternoon on a massive “breakthrough” COVID-19 testing plan with Mayo Clinic and the University of Minnesota playing key roles — a crucial piece of the state’s effort to control the spread of the disease and slowly reopen the economy.

The governor told reporters the plan, expected will make Minnesota tops in the nation in terms of testing, but cautioned: "This is not a pass that everything is back to normal and it's all easy from here on out. It's one tool in the toolbox that leads us in that direction.”

Health Commissioner Jan Malcolm said the plan would be ramped up quickly so that every Minnesotan with COVID-19 symptoms will be tested as soon as possible, with a special emphasis on vulnerable populations, including long-term care residents and the workers who care for them as well as communities of color.

Collectively, she said, the new, widespread testing plan will let state investigators respond more quickly to hot spots that break out around Minnesota.

Walz has said that a massive increase in testing — both tests that diagnose people who have the virus and tests that determine whether someone has developed antibodies to fight the virus — is necessary to restart parts of the economy.

The governor has called for at least 5,000 tests completed daily, although the state’s doing only about a quarter of that currently.

Mayo Clinic and the University of Minnesota are expected to play key roles in the testing ramp-up. U experts last week said that with $20 million in state funding they could soon begin testing up to 10,000 people per day for the coronavirus.

In a statement just prior to the briefing, Walz’s office said the plan has a capacity to ramp up testing to as many as 20,000 Minnesotans per day.

Walz’s office said the testing push will be funded in part by $36 million from the COVID-19 Minnesota Fund. Walz had $124 million left in a state COVID-19 fund that could provide financial support to make testing more widely available and faster.

News that a massive testing effort would be set in motion came on the same day the Health Department reported Minnesota deaths jumped to 179, up 19 from Tuesday, the largest jump in deaths reported by the agency since the pandemic began. 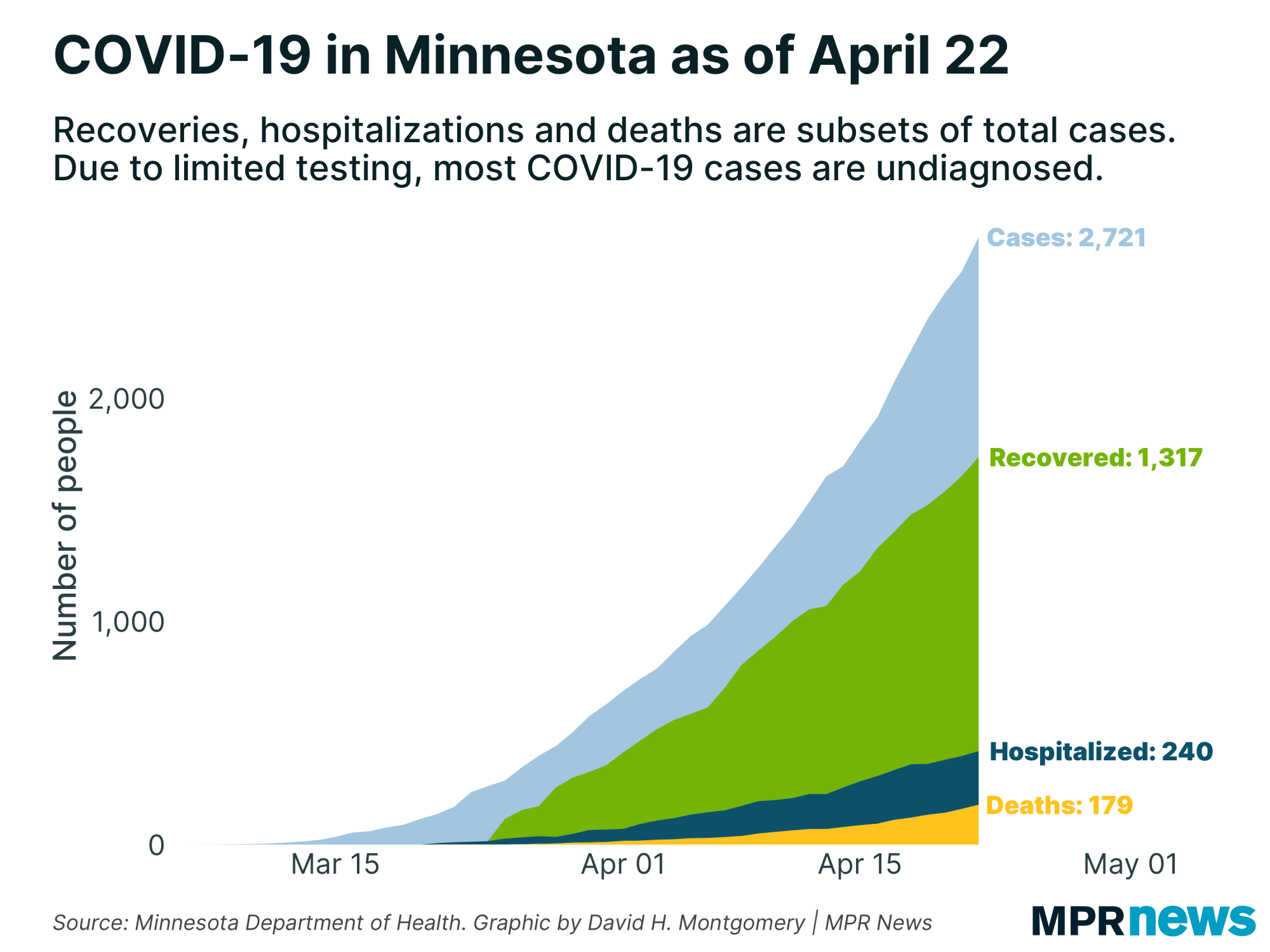 The number of people currently hospitalized rose only slightly while the total number of patients in intensive care fell by 10 to 107, an indication that the state’s ICU systems are not yet overwhelmed.

The state has now confirmed 2,721 total positive tests for the disease, up 154 from Tuesday. Of the total cases identified since the pandemic began, just under half of those patients have recovered to the point they no longer need to be isolated.

The latest counts come a day after health officials made clear that many curbs on daily life must continue. 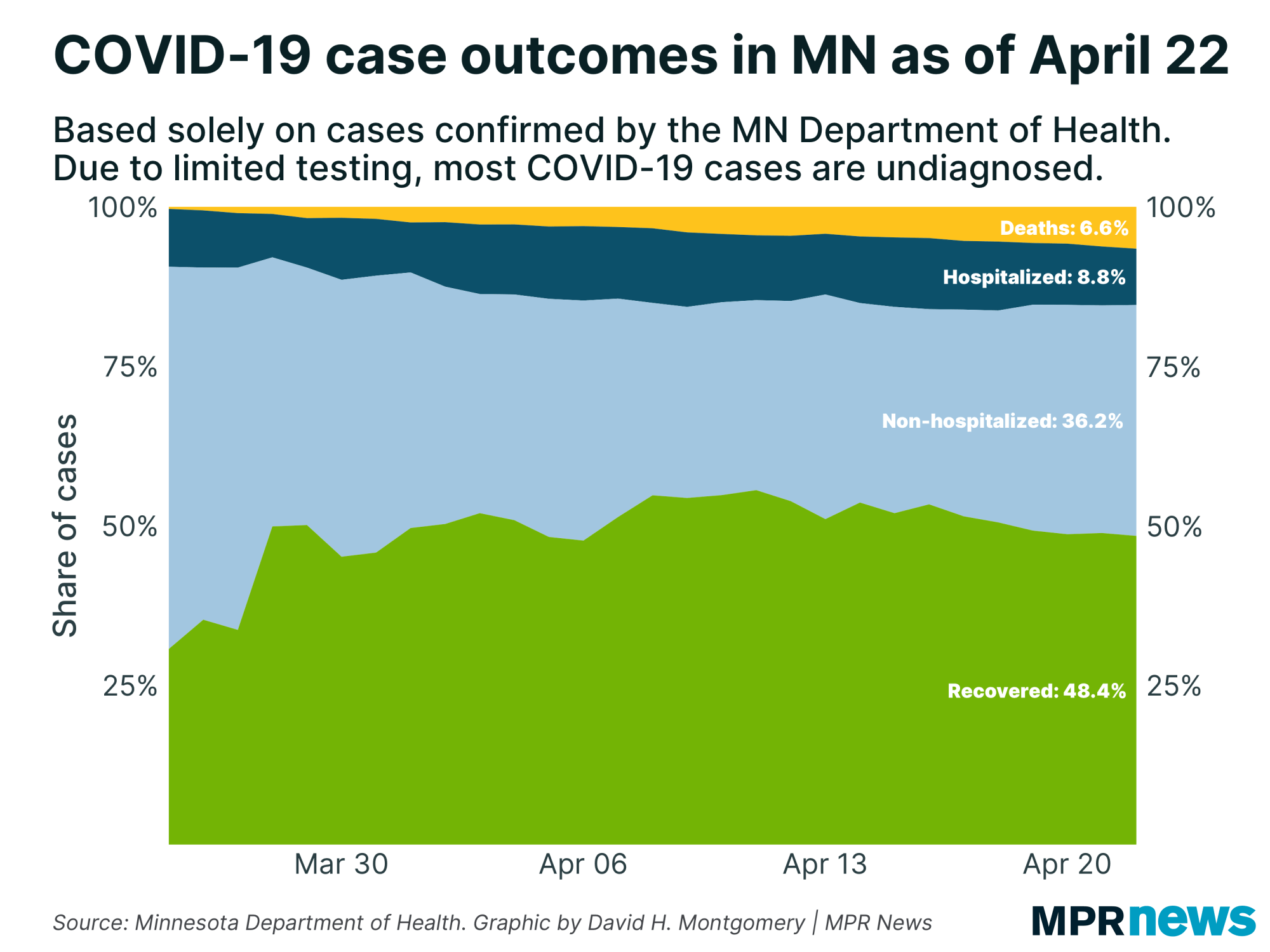 Federal guidelines say states should wait until they see a two-week downward trend in cases before beginning to reopen their economies. “By that measure, we are not ready to reopen,” Jan Malcolm, the state’s health commissioner, said Tuesday.

Nobles County in southwestern Minnesota continues to be a hot spot for COVID-19. It holds the largest cluster outside the Twin Cities area and Rochester and the highest rate of COVID-19 cases of any county by far relative to its population.

The JBS pork processing plant in Worthington is at the center of the Nobles County outbreak. On Monday morning, company executives announced they were indefinitely shutting the plant, which employs some 2,000 workers, to try and get control of the situation.

On Wednesday, the Health Department said Nobles County now has 126 confirmed positive tests for the disease, up 25 from Tuesday. It has just two cases last week. The county also recorded its first death from the disease. 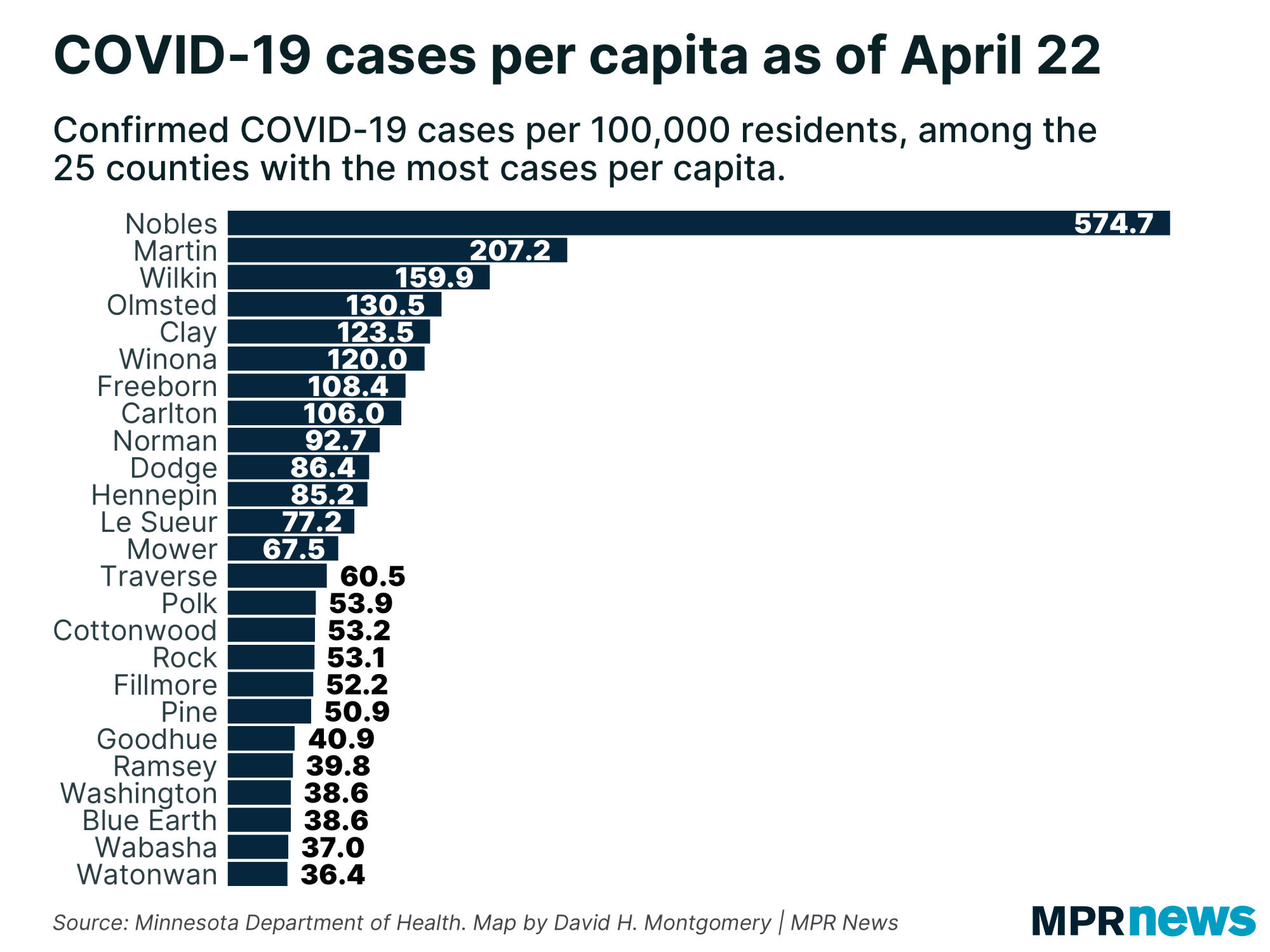 Gov. Tim Walz continues to face political pressure from Republicans to restart the economy faster, but he’s held to his plan of using science to drive his decision-making.

While Walz has OK’d a restart to golfing, boating and other outdoor activities within social distancing rules, he’s said that restaurants, bars and big sporting venues — places that draw big crowds close together — will be among the last to reopen.

And complete normalcy is not on the table in the near future, the governor said. Minnesotans are “going to have to change the way business is done for the next 18 months,” Walz said Monday. “The retail buying experience is going to change dramatically.”

Hormel says employees at the Jennie-O turkey processing plant in Willmar, Minn., have tested positive for the coronavirus.

Amid the outbreak, the Willmar plant is stepping up its safety measures, including taking employees’ temperatures daily, using masks or face shields and sanitizing the factory more frequently. The company also touts on-site nurses to help workers get tested for the coronavirus. Hormel said it’s expanding remote work options as well.

As of Tuesday, Kandiyohi County, where the Willmar plant is located, has confirmed three COVID-19 cases, according to the state Health Department.

Hennepin County officials say spending related to COVID-19 is draining the contingency fund. The Hennepin County Board on Tuesday approved the transfer of $10 million from its general fund to the rainy day coffers which have been reduced to $1.9 million.

County Administrator David Hough said the bulk of the expenditures have gone towards providing housing for homeless people and purchasing protective gear.

“Our burn rate is significant,” said Hough. “All these things cost money.”

Officials say currently more than 250 homeless people are using isolation rooms paid for by the county. The board also approved an additional $4 million to help acquire more space.

“We need to understand what exactly has been spent to date; what have we received to date; what are our liabilities to date,” said Opat, noting that the county will have to provide similar information to state and federal authorities when it requests assistance.

Hough said so far the county has spent $6.7 million in COVID-19-related expenses and has received $6.2 million in grants from the state and the feds.

“We’re applying for every resource and every opportunity either at the state or federal level,” said Hough, adding he expects the county will receive enough to partially reimburse the county for its costs.

An inmate of the Beltrami County jail has tested positive for COVID-19.

It’s the jail’s first case, but County Sheriff Ernie Beitel said his staff has been preparing for weeks. Judges released nearly half the inmate population last month. Guards stocked up on cleaning supplies and masks, and created new health screening and testing protocols with the local hospital.

Beitel said they even brought in a crew to rework the ventilation system in an 18-bed quarantine area, so healthy inmates won’t be breathing infected air.

“They modified our systems to allow more negative pressure units. It pulls air in from the outside and exhausts straight to the outside, so we have a larger quarantine area if needed,” Beitel said.

The inmate infected with COVID-19 is in quarantine and starting to feel symptoms. He’ll remain under close medical supervision. The arresting officer is also under quarantine.

A northern Minnesota paper mill is temporarily closing because of the economic fallout from the coronavirus pandemic.

UPM Blandin, which employs about 400 people, cites market forces for shutting down its Grand Rapids mill. The company did not provide exact details of the shutdown, but a representative from Teamsters Local 346 tells WDIO-TV the closure is expected to last about two weeks.

“The global response to the coronavirus pandemic has led to an overall slowdown of the economy. We are taking short-term measures to respond to market conditions. We rely on our global network of modern paper mills to meet customer demand,” Scott Juidici, general manager of UPM Blandin, said in a statement.

Hibbing Taconite to lay off 650 due to coronavirus

Another mining company on the Iron Range is idling workers due to the coronavirus pandemic and the declining demand for steel.

Hibbing Taconite will end production May 3. As a result, 650 workers will be laid off, both salaried and hourly workers.

ArcelorMittal, which manages Hibbing Taconite and owns the largest stake in the mine, hopes to restart production July 6.

Hibbing Taconite is the third Iron Range mine and plant to announce it would stop production and layoff most employees.

Cleveland-Cliffs said recently it would idle Northshore Mining in Babbitt and Silver Bay and U.S. Steel said it would temporarily stop production at Keetac. Layoffs at the three mines total about 1,500.

Behind rallies to reopen economy, a Minnesota activist and his family: Across the country, Ben Dorr and his brothers, Chris and Aaron, have long opposed Republican legislators for not being conservative enough on issues ranging from guns to abortion. They are now promoting rallies to reopen businesses in the midst of the coronavirus pandemic. Their detractors say they spread disinformation to sow confusion among voters.

Students with special needs could slip behind: Without the kind of in-person therapists, instruction and support found in schools, special education students and their families are facing steep challenges. Many are beginning to worry about regression.

Coronavirus spread puts Minnesota’s Willow River boot camp on edge: Just 8 miles from a coronavirus outbreak at the Moose Lake prison, another cluster of cases has emerged at a boot camp in Willow River, where up to 180 men live in very close quarters. It's an environment that some family members worry is ripe for the spread of the virus.

To read the original story and see related COVID-19 reporting, follow this link to the MPR News website.  https://www.mprnews.org/story/2020/04/21/latest-on-covid19-in-mn