During pandemic, Har Mar Superstar thinks — and colors — outside the box Sean Tillmann and Sabrina Ellis perform as Heart Bones at The Current in February 2020. Tillmann, also known as musician Har Mar Superstar, canceled the rest of a national tour of Heart Bones' new album "Hot Dish" in mid-March, and has since been running a nonprofit creating coloring books to raise funds for people suddenly unemployed as a result of the pandemic.
Photo: Nate Ryan | MPR file

In recent weeks, COVID-19 has forced spectacular changes of direction for some people — Take Sean Tillmann, for example.

Until recently, he's been best known as musician Har Mar Superstar. Now he's running a nonprofit creating coloring books to raise funds for people suddenly unemployed as a result of the pandemic.

A month ago, he and his collaborator Sabrina Ellis were on the road as Heart Bones, doing a national tour with their new album "Hot Dish." But on the night of March 13, at a club in Birmingham, Ala., they realized for their own safety and that of the fans, they couldn't perform.

They postponed the rest of the tour.

"We drove halfway across the country, dropped off my co-writer Sabrina in Austin, Texas, and then drove straight to Minneapolis the next day," Tillmann said.

When he got home, he found his fiancé Laura Hauser was already thinking of ways to help musicians who were facing hard times. She began offering hand-drawn thank you cards for anyone who could supply proof they had bought the Heart Bones album. People clearly wanted to help. She was quickly swamped with requests.

Together, Hauser and Tillmann came up with a bigger idea.

"Why don't we make a coloring book so that all of our friends who have kids at home and don't know what to do with them can have something to do and at the same time keep the spirit of this thing you started alive?" he said.

And so Coloring Books for a Cause was born, and Tillmann said things began moving fast — really fast.

"Yeah, we got the first book together in a week," he said.

That was the 28-page “Big Coloring Book of First Avenue,” illustrated by Stacey Combs, Michael Gaughan and Laura Hauser, with pictures of people who have performed at the club. It benefited an organization supporting the local music community, and the people out of work because live shows have ceased. The book came out March 25, and quickly sold about 3,500 copies.

"We have already raised $15,000 for the Twin Cities Music Community Trust," said Tillmann. 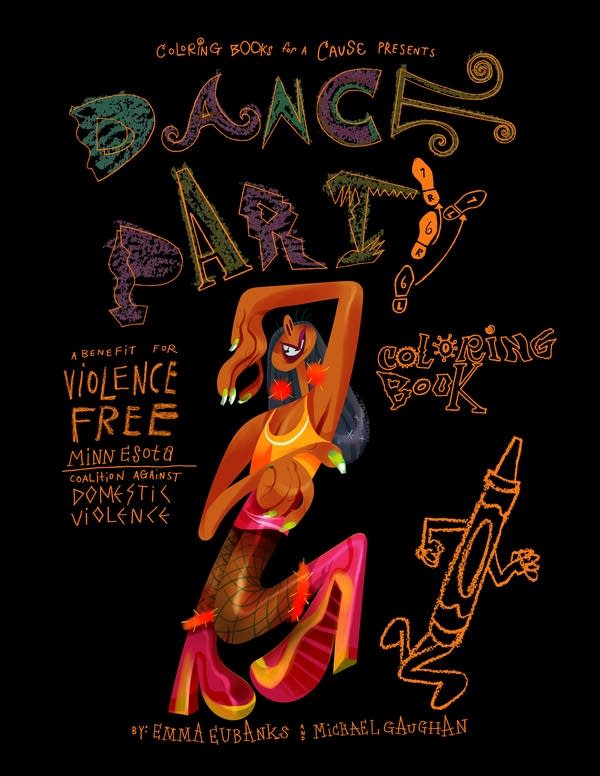 Next up was “The Big Coloring Book of Grumpy's and Palmer’s,” a benefit for the laid-off staff of two iconic Minneapolis bars.

It features sketches of people and the features of both establishments. That came out last week.

"During shelter in place there are a lot of people who don't feel safe in their own homes," he said. "A lot of people are forced to be home, or need to be relocated or just need support during this time."

In addition to raising money for a good cause, Tillmann hopes the book will also raise awareness of Violence Free Minnesota itself.

And Tillmann isn't finished yet: Next up will be a coloring book benefiting laid-off employees at Harold's on Main, a bar he co-owns in Moorhead, Minn.

"It just so happened that I had a business that does aid people in need," he said with a laugh.

And production has already begun on another First Avenue coloring book. After that, Tillmann said, he'll probably take a break from coloring books, although he does have some ideas that might work on a national level.

He's also trying to work out what's going to happen with Heart Bones. He wants to do an album release party at First Avenue. He knows musicians who are already rebooking canceled gigs for the fall, but he worries even that will be too early for people to congregate for concerts.

"We don't want to endanger anyone, or ourselves," he said. "But the way we make our living is playing live shows. So it's kind of a conundrum."

But of one thing he is sure: Har Mar Superstar and Heart Bones will play live again.

To hear an audio report of this story and read related reporting, follow this link to the MPR News website.  https://www.mprnews.org/story/2020/04/17/during-pandemic-har-mar-superstar-thinks-and-colors-outside...