Latest on COVID-19 in MN: Walz wants 5K tests daily by May 4 Gov. Tim Walz provides an update on the state's next steps to respond to COVID-19 during a news conference on April 8 in St. Paul. The governor said he was pushing for 5,000 people tested daily by May 4, when his stay-at-home order is set to expire. Photo: Glen Stubbe | Star Tribune via AP file

Minnesota will need a drastic increase in COVID-19 testing in the next three weeks in order to hit Gov. Tim Walz's goal — one he says is critical to a successful reopening of the state's economy.

The governor said Wednesday he's pushing for 5,000 tests a day by May 4, when his stay-at-home order expires. The state has averaged about 1,100 tests a day this week.

Logistical issues and an initial belief the federal government would take command of testing had delayed the process, Walz said, but now Minnesota must "go it alone."

While there's a long way to go on testing to hit his goal, Walz said Mayo Clinic and other resources could help Minnesota lead the U.S. in testing.

State officials also said they're making headway on addressing shortages of masks and personal protection gear for health workers. They said the stay-at-home order and other measures pushed back the expected peak of hospitalizations, buying time for them to source and stockpile equipment.

However, political rifts continued to grow between DFLers, including Walz, and Republican lawmakers.

Republican House Minority Leader Kurt Daudt on Tuesday argued that the state needed to tailor restrictions to those at higher risk and "allow the rest of us to go back to work." Walz reiterated Wednesday he also wants to get people back to their jobs but “you can’t just say you want to restart” the economy.

Citing the recent shutdown of the Smithfield Foods pork plant in Sioux Falls, S.D., near the Minnesota border, amid a COVID-19 outbreak, Walz said, "it does us no good to send everybody back to work and get everybody sick.”

Noting that Minnesota has the lowest infection rate in the country, Walz said Minnesotan’s efforts over the past month to keep people home and out of crowded public spaces was working to check the disease.

“All of this sacrifice that we made,” he cautioned, “could be eaten up very quickly.” 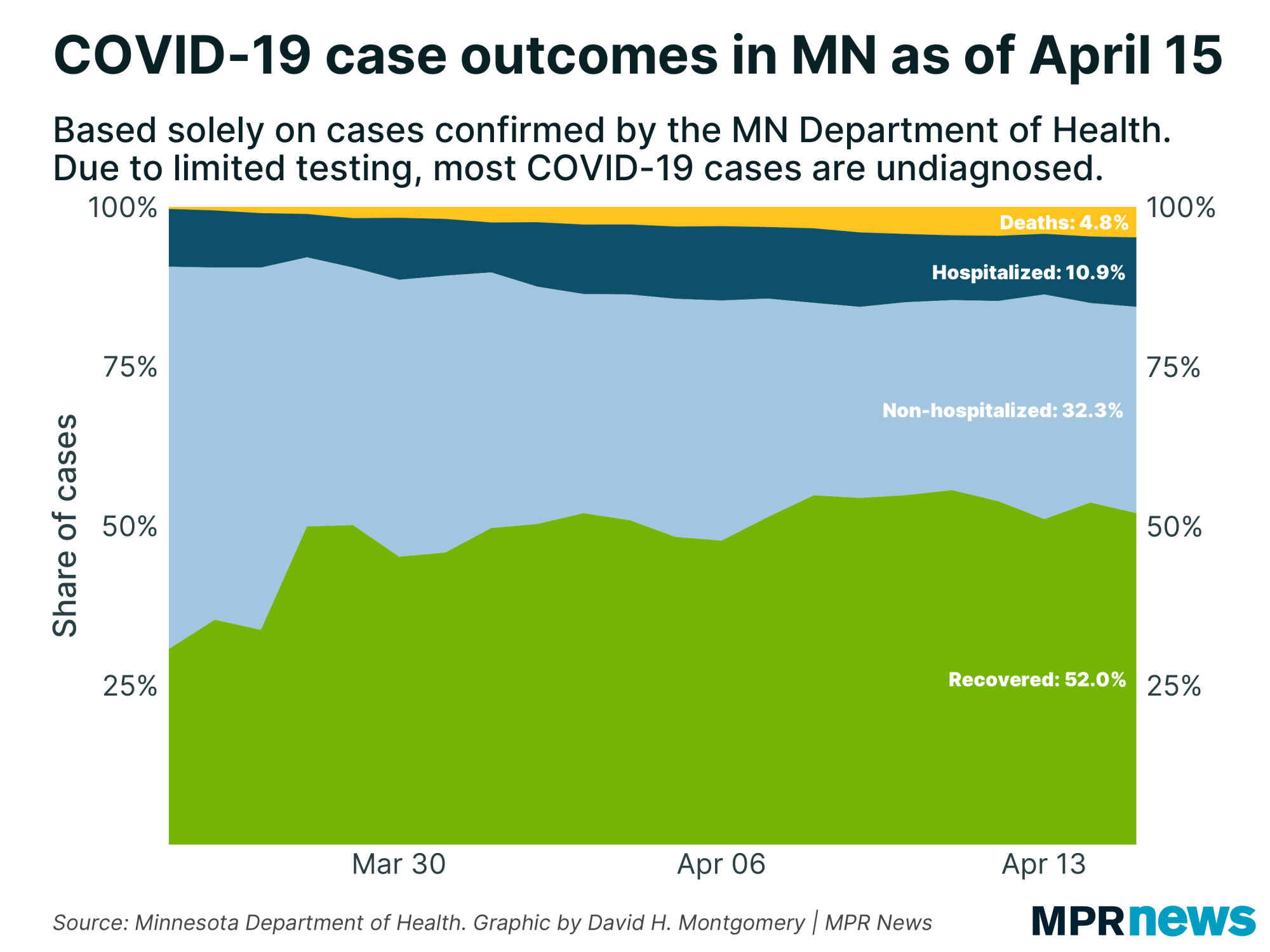 The mother of Minnesota Attorney General Keith Ellison has died of COVID-19. Clida Cora Ellison died March 26 in Detroit. She was 82.

Minneapolis City Council member Jeremiah Ellison said his grandmother had been healthy, but developed pneumonia suddenly and spent her final days on a ventilator. Ellison said he learned that COVID-19 was the cause only recently.

Only three people could go to the burial, and social distancing limited who could attend the funeral. Ellison said it was too dangerous for his 91-year-old grandfather to go.

"The risk of moving him around in Detroit was too great for him to attend,” the Minneapolis council member said, “and I know that he has had a hard time dealing with the fact that he couldn't attend."

Minnesota State University Moorhead announced Wednesday the school plans to eliminate more than 60 faculty, staff and administrative jobs to address a budget shortfall over the next two fiscal years.

"In this environment, I think the only way to invest where we need to invest is by being clear about what we're going to stop doing so that we can make those investments,” Blackhurst said.

University officials say the cuts are not a direct result of shutdowns related to the COVID-19 pandemic, but acknowledged that the pandemic has created additional issues for the university's already challenging budget. Minnesota State University Moorhead has about 6,000 students.

Boundary Waters to be closed until early May

U.S. Forest Service officials announced they are closing the Boundary Waters Canoe Area Wilderness to visitors to help slow the spread of COVID-19.

The BWCA will be closed to both day and overnight visitors through May 4.

Officials say they're closing the wilderness to keep visitors out of local communities while Minnesota's stay-at-home order is in place.

The Forest Service says it will refund reservations through May 4. Starting May 5, visitors to the BWCA can print their reservation confirmation email at home and use that as their permit.

Forest Service offices are currently closed to the public.

Bill Forsberg, who runs Boundary Waters Outfitters and Timber Trail Lodge outside Ely, Minn., said the closure won't have much impact on his business.

“My customers are calling me every single day wanting to know what's going on, and I have nothing to tell them other than sit tight. I have to assume we're going to be open,” he said. "Where it would become impactful is if the governor extends this beyond fishing opener, then that's when we need to figure out what we're going to do.”

Minnesota's walleye season opens May 9. Isle Royale National Park and the Apostle Islands National Lakeshore have also announced they will delay their openings until mid-June.

Officials say COVID-19 antibody testing is crucial to reopening business — but what is it? State officials are pointing to COVID-19 antibody tests as potentially important tools for reopening the economy. They may provide insight into how widespread the virus is, and how long it’s been here. But they’re issuing caution against a flood of tests on the market that may not be reliable or accurate.

When a patient really needs to open wide, but the dental office is closed: Gov. Tim Walz ordered dental offices to suspend routine and elective care in Minnesota during the COVID-19 crisis. But some dental offices chose to simply close, creating a problem for people seeking emergency care.

Best Buy to furlough more than 50,000 workers due to COVID-19: Company CEO Corie Barry announced the job cuts Wednesday, saying nearly all part-time workers were being laid off, although eligible employees are keeping health insurance coverage at no cost for three months.

Experts say ‘there’s so much uncertainty’ regarding reopening the economy: There are more questions than answers when it comes to the future of the economy post-pandemic. We turned to the president of the Federal Reserve Bank of Minneapolis for his views on federal stimulus funding and who is hardest hit right now.

U of M's new low-cost ventilator gets FDA approval: The FDA’s decision means the new, simple ventilator developed by engineers and doctors at the University of Minnesota can be built and distributed to health systems. The U of M is open sourcing the design so they can be easily produced.

ACLU sues to release Moose Lake inmates due to COVID-19: The organization filed a petition Wednesday against the state Department of Corrections. According to the department’s database, 12 inmates in Moose Lake are confirmed positive for the coronavirus and another 31 inmates are presumed positive.

To read the original story and more COVID-19 reporting, follow this link to the MPR News website.  https://www.mprnews.org/story/2020/04/16/latest-on-covid19-in-mn