Crew members on the Robert S. Pierson stay onboard as their freighter unloads salt at the mouth of the Thunder Bay River on Thursday. Crews on Great Lakes ships are taking extra safety precautions during the coronavirus epidemic.  Alpena News Photo by Julie Riddle

Uncertainty is the worst part.

Thomas Flanner, wheelsman on the Philip R. Clarke, will leave home Sunday, headed by bus to Toledo to prepare for his freighter’s first outing of the season.

He’s not sure what to expect when he gets there.

Rumor has it that, once they get on, crew members might not be able to get off the boat for 30 days.

“That would suck,” Flanner said. “I’m not going to beat around the bush.” 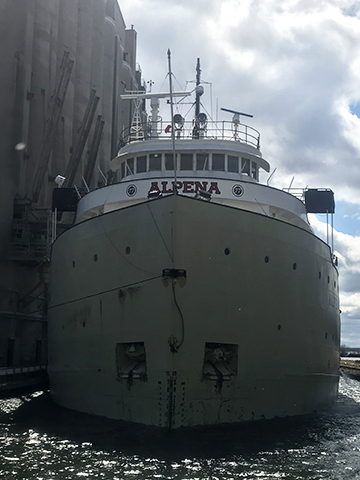 Courtesy Photo The Alpena waits to depart from the Lafarge North America plant in Alpena on Thursday. Safety measures at Lafarge’s dock help ensure the health of crew and on-shore employees alike.

The coronavirus pandemic keeping millions of Americans in their homes may keep Great Lakes freighter crews from setting foot on land for weeks at a time, all in an effort to promote safety through social distancing.

Two people in Presque Isle County, an Onaway paramedic and her husband, have been infected with COVID-19, the disease caused by the coronavirus. No cases have been reported in Alpena, Montmorency, or Alcona counties. Statewide, nearly 23,000 cases and nearly 1,300 deaths have been reported.

Though there have been signs of hope, restrictions meant to prevent the spread of the disease continue to be announced. On Friday, the U.S. Forest Service said recreation facilities and restrooms are shut down and trash service is suspended in the Huron-Manistee National Forest, which encompasses a portion of Alcona County.

Meanwhile, the people who run the big boats on the big lakes are facing the same safety decisions as the rest of the country.

‘PUT YOU IN PRISON’ 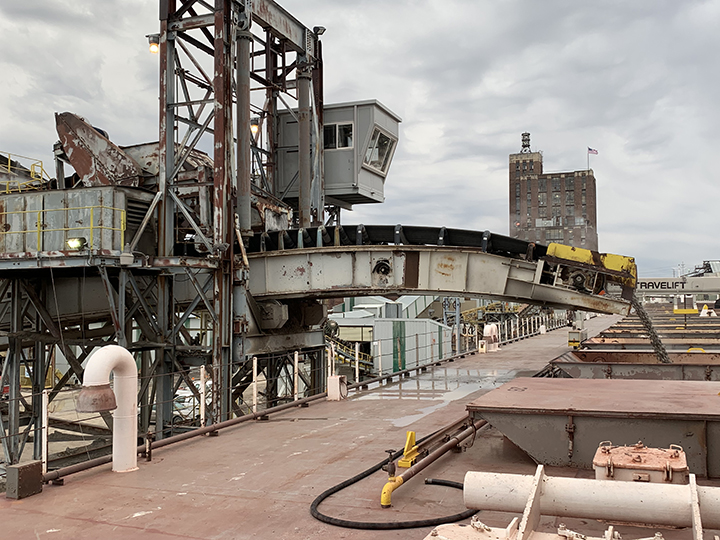 In a normal year, “fit out” — when ships are prepared for sailing after a winter at port — happens mid-March, Flanner, the Clarke wheelsman, said.

This year, his ship’s shove-off date got later and later, whether because of the coronavirus or an unsteady economy caused by coronavirus-related shutdowns, he’s not sure.

The crew, anxious to hear how the virus that’s so drastically changed so many lives will affect them, is talking a lot, wondering, surmising.

In the confined space of even a big boat, crew members can’t get away from each other, Flanner said.

With tiny sleeping quarters, limited dining spaces usually packed shoulder-to-shoulder, and miles of water their only neighbor, the six-foot separation health officials want only goes so far in stopping the spread of sickness, said Flanner, recalling bouts of the flu shared among everyone onboard.

The thought of not being allowed off when their ship comes to port is disheartening, said Flanner, an Alpena resident who wants to stretch his legs in familiar territory when his freighter stops in Rogers City for a load of limestone.

The company that owns his freighter has its hands full making decisions to keep its crews safe, Flanner said, and has promised it would fill them all in on the details when they get to their ship.

In the meantime, the tight-knit crew that meets for wintertime steak-fries and is like a family continue to wonder what to expect.

“Our main concern is the I-don’t-knows,” Flanner said.

‘COULD BE THE SAFEST PLACE IN AMERICA’

The answers are coming, said James Weakley, president of the Lake Carriers Association, an organization that advocates for and provides guidance to 13 companies operating 46 Great Lakes vessels.

The owners of the freighters and tug barges that deliver the iron ore, stone, and other materials that keep many of America’s businesses running have been scrambling to implement safety measures to make sure their boats can keep sailing and their sailors can stay healthy, Weakley said.

Some may think being trapped onboard a vessel during a pandemic is scary, he conceded.

“It could be,” Weakley said. “Or, it could be the safest place to be in America.”

Sailors will be vetted for symptoms before getting onboard, those with symptoms sent away to self-quarantine for 14 days.

At port, human interaction will be severely limited.

Food and mail deliveries will be accomplished by way of cranes and baskets lowered by a hoist. The steel cables that secure a freighter to the dock will be handled by someone on shore, not by a crew member hopping off the ship to help. Ladders usually used to board the boats may not be lowered, discouraging human contact as much as possible.

Ship-to-shore communications usually handled by a friendly face-to-face chat on the dock will be accomplished by email or cell phone or a holler over the rails of the boat.

Some crew members may, indeed, be asked to stay onboard when ships come to port, Weakley said, but that decision is up to the individual company. Anyone who does go onshore would need to be rescreened before being allowed onboard.

If a sailor were to develop COVID-19 symptoms, they would be quarantined onboard, their condition reported to the U.S. Coast Guard and the U.S. Centers for Disease Control and Prevention. Great Lakes freighters are never more than 24 hours from the nearest port, should a crew member need to be taken to medical help.

In an emergency, someone could be removed from a ship by helicopter or small boat.

No confirmed cases of COVID-19 have been found on Great Lakes vessels, Weakley said. A few suspected cases have led to crew members being dropped off when their ships docked.

Afterward, work spaces were cleaned, the vessels were sterilized, “and then we keep sailing,” Weakley said.

‘YOU KIND OF HAVE TO’

Aboard an 845-foot tug barge loaded with stone, First Mate Jeffrey Idalski had just gotten a letter with the news: no crew changes for the next four to six weeks.

“We’re kind of told we have to stay on the boat,” Idalski explained. “You don’t really have to, but, you kind of have to.”

Half a mile from the home he left behind almost a month ago when his ship fitted out for the season, Idalski couldn’t hop off and visit family, though he had been docked at Carmeuse Lime and Stone in Rogers City for two days.

That’s OK, Idalski said: “I don’t want to bring anything back to the boat.”

Mealtimes in the galley are staggered, with no more than four people allowed to eat at one time, each provided individually wrapped utensils. Rooms are cleaned meticulously, more so if anyone leaves or someone new comes onboard.

Hand sanitizer, which he called liquid gold, is kept handy and used often.

He’s heard rumors some companies are having to lay up their ships and send crews home, not because of illness onboard but because there isn’t enough work to keep the freighters running.

With America’s industry throttled by drastic measures to stop the spread of the coronavirus, companies like the Big Three car manufacturers in Detroit halting production, the steel and concrete made with the raw materials carried by the big ships isn’t needed in the same quantities as in recent years.

Blast furnaces that turn iron ore pellets to steel are shutting down all over, from Toledo to Cleveland to Gary, Indiana, Idalski said.

Originally scheduled to haul iron ore early in the season, Idalski’s ship now has almost entirely rock deliveries on its schedule — including the limestone plentiful at Carmeuse, the Lafarge North America plant in Alpena, and the Lafarge Presque Isle Quarry near Grand Lake.

The need for stone — used in creating roads, laying sidewalks, or building new hospital wings — keeps it a viable commodity even in a tough economic market, Idalski said, recalling a recession in 2009 when the freighter industry was kept afloat by an economic stimulus that called for the building of new roads.

A little worried he won’t be working long, wondering when he’ll be able to get off his ship, Idalski continues to keep his distance from his crewmates, wash his hands, and do his work in good spirits.

“I know we’re all in the boat together,” Idalski said. “But we’re all doing what we can.”

To read the original story and see related reporting, follow this link to the The Alpena News website.  https://www.thealpenanews.com/news/local-news/2020/04/covid-i-dont-knows-concern-freighter-crews-on-...