There’s a new robin’s nest sitting atop the elbow of my downspout and under the eave of my roof. I’ve watched as the the nest-building progressed over the past few days, and I’m glad that the nest will be sheltered from the strong north winds and wet snow Sunday and Sunday night.

As I update you on the Sunday/Sunday night snow, keep in mind that April snow typically melts within a few days.

Several computer models show rain spreading across portions of southern Minnesota Saturday evening, then rain or a rain/snow mix in southern Minnesota, the Twin Cities metro area, and parts of western Wisconsin late Saturday night and early Sunday. The mix transitions to wet snow in most areas Sunday morning, and the snow continues Sunday afternoon and into Sunday night.

The heaviest snow will tend to be in southern Minnesota and portions of Wisconsin. Here’s the snow forecast from the Twin Cities office of the National Weather Service: 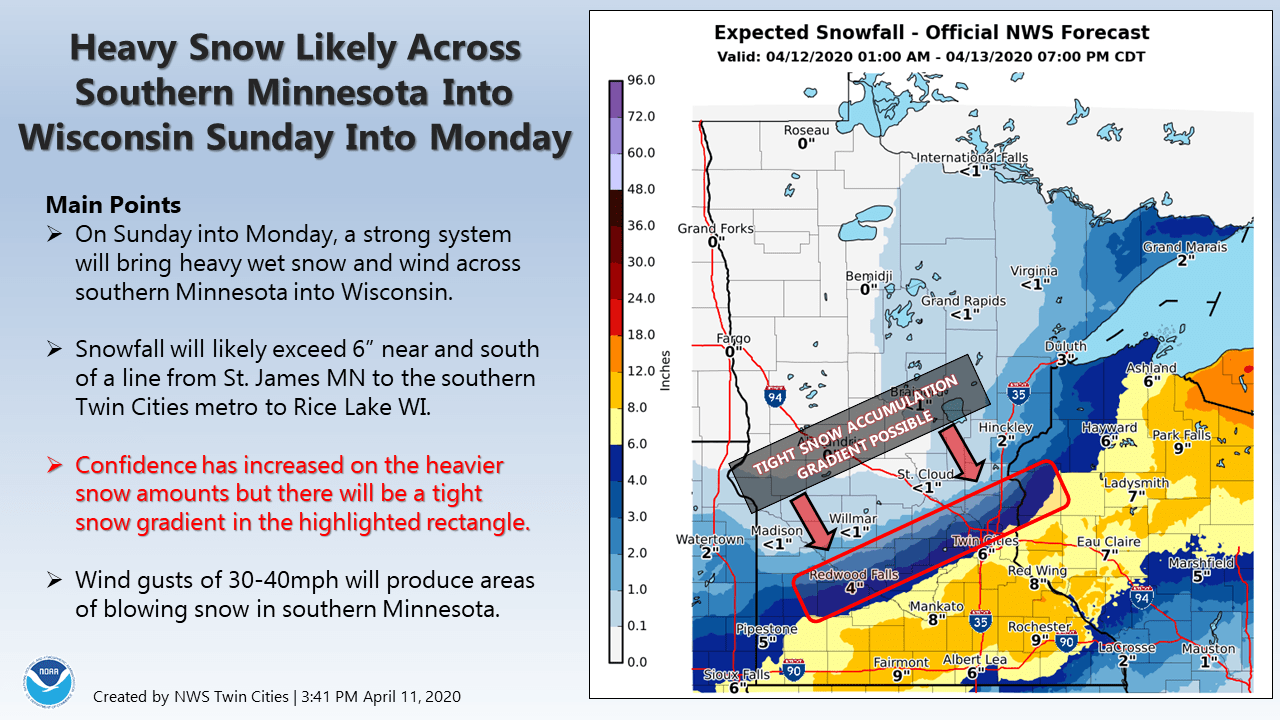 Parts of Scott and Dakota counties and southern Washington County could tally over 6 inches of new snow. Generally 3 to 5 inch totals are possible in the remainder of the metro area, including Minneapolis and St. Paul. The sharp cut-off in snow amounts to the north could creep southward a bit…check forecast updates.

Here’s the snow forecast for northwestern Wisconsin and parts of northeastern Minnesota: 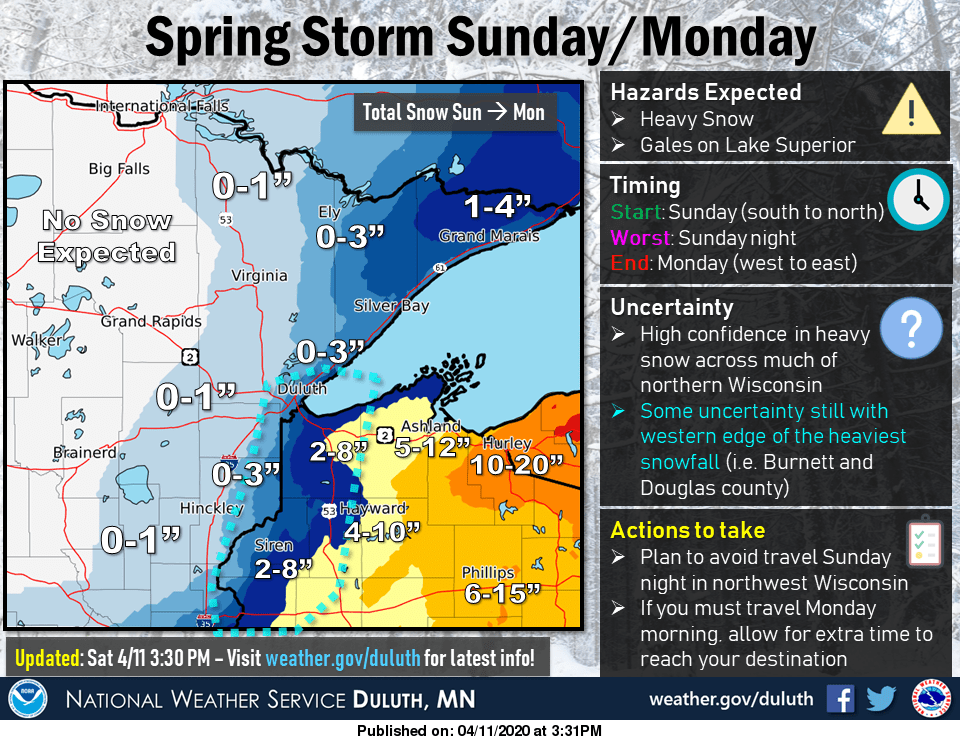 The start of the snow will be delayed in northeastern Minnesota and parts of northwestern Wisconsin: 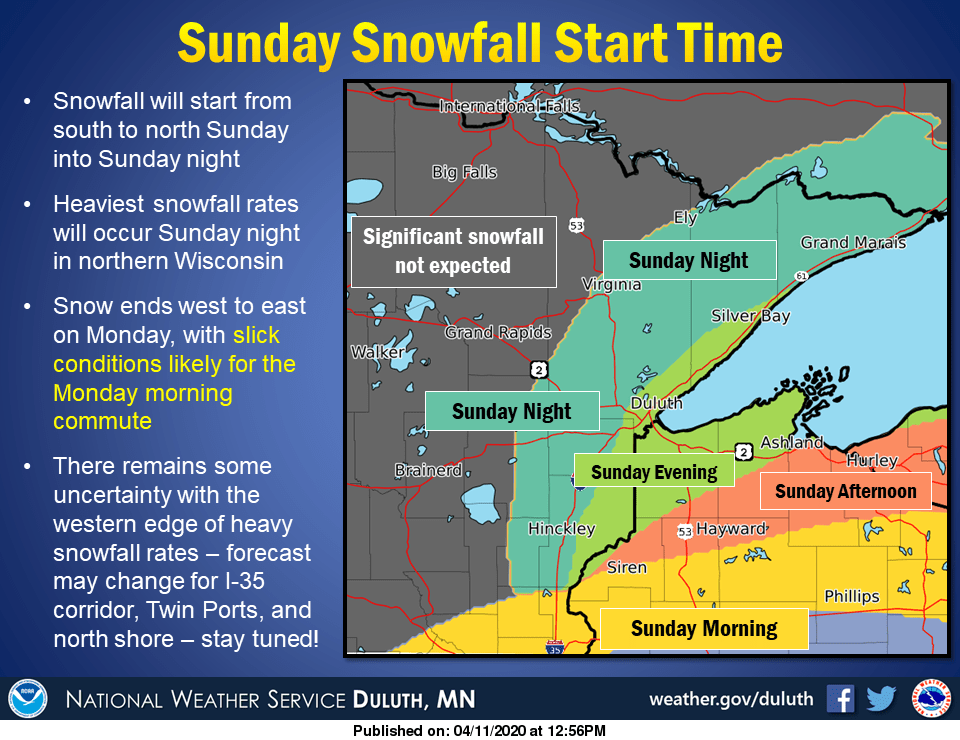 Winter storm warnings (pink) are in effect Sunday into early Monday for much of southern Minnesota plus south and east portions of the metro area and portions of western Wisconsin: 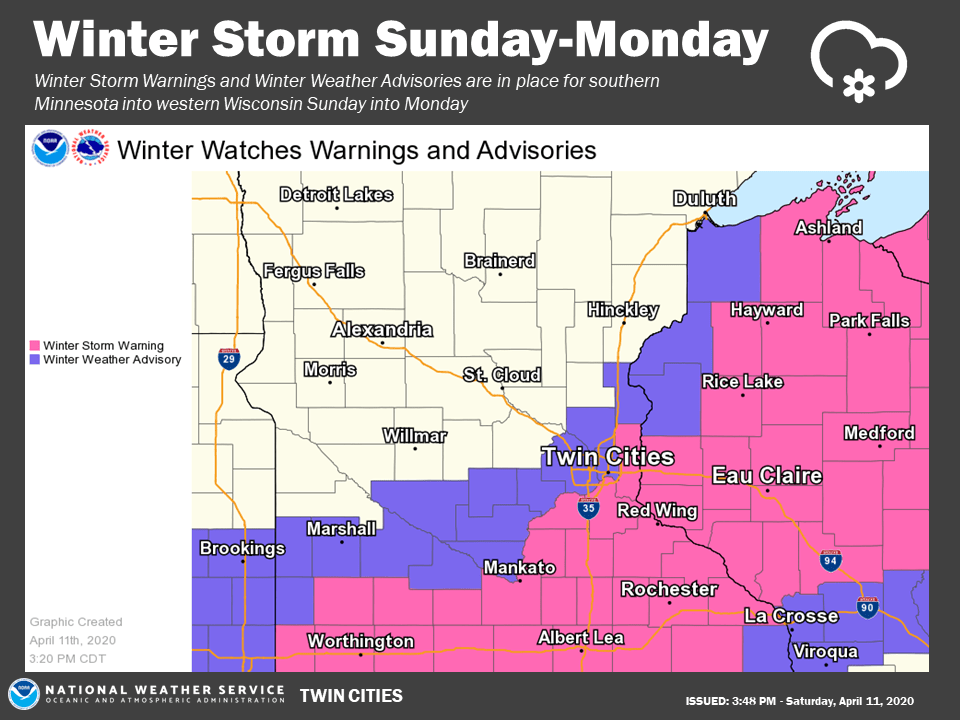 Highs during the daylight hours of Sunday will be in the 30s in many locations. There may be some lower 40s early Sunday in the metro area and points to the east and south, then slowly falling temps through much of the day.

Twin Cities metro area highs are projected to reach the upper 30s Monday and around 40 on Tuesday, followed by lower 40s Wednesday, upper 40s Thursday and lower 50s on Friday.

To read the original report and see more storm reporting, follow this link to the MPR News website.  https://www.mprnews.org/story/2020/04/11/snow-and-strong-winds-sunday-and-sunday-night