People walk and bike on the trails around Bde Maka Ska in Minneapolis on Sunday.
Photo: Evan Frost | MPR News

Thirty Minnesotans have now died from COVID-19, up one from Sunday, while 57 are hospitalized in intensive care, the state Health Department said Monday.

The agency said 986 Minnesotans have tested positive for COVID-19 since the pandemic began, 51 more than the day before. Just under half have recovered to the point they no longer need to be isolated.

Gov. Tim Walz, Health Commissioner Jan Malcolm and other state leaders are briefing reporters now on the latest efforts to stem the spread of the disease and prepare for an expected surge in cases and hospitalizations.

The rising numbers of cases and hospitalizations come as Walz’s two-week stay-at-home order is set to expire on Friday.

While no decision has been announced, the governor signaled last week that he may extend that order, possibly through April 30, based on guidance from the federal Centers for Disease Control and Prevention.

Walz told reporters Monday afternoon that he's assessing sector-by-sector and expects to decide midweek on renewing the stay-at-home order. “I know that the unknowns in this make it so frustrating.” 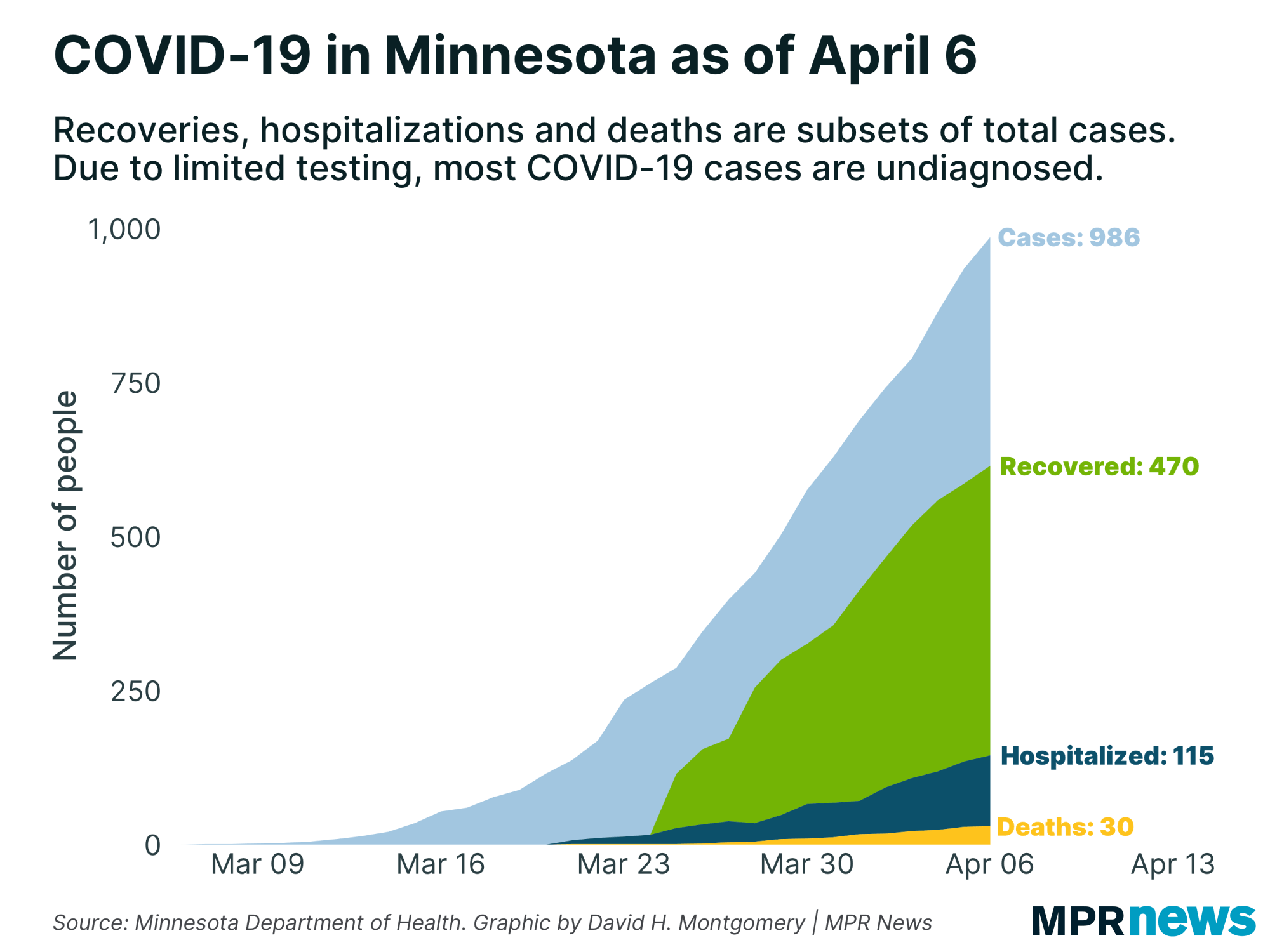 Walz said that Minnesota is still preparing for a surge to hospitals even though the state has some of the lowest per capita infection rates among states, according to CDC statistics.

Beyond the updates on cases and deaths, the Health Department Monday noted: 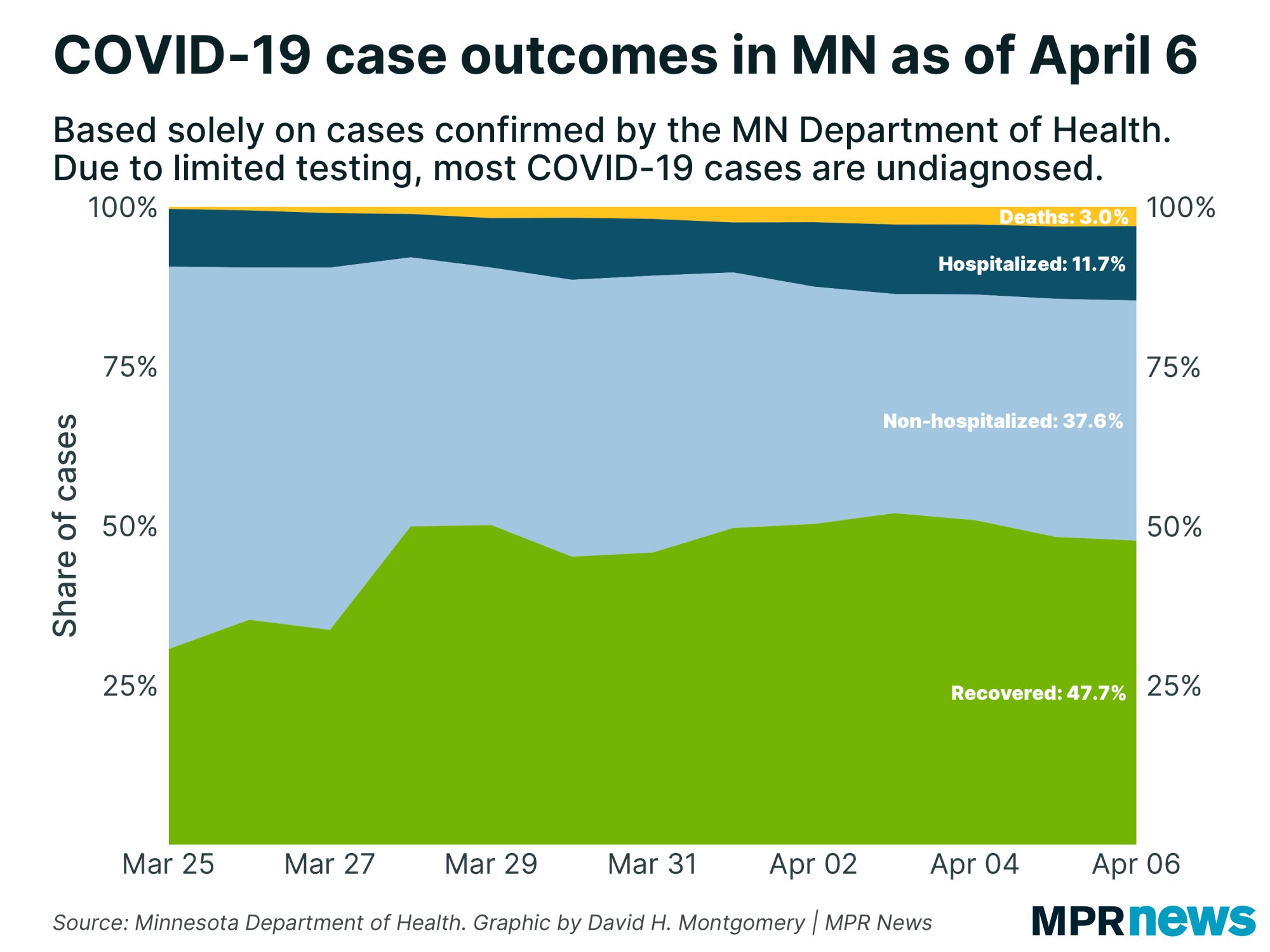 Minnesota health officials over the weekend released the names of long-term care facilities in the state linked to a positive COVID-19 case.

State infectious disease director Kris Ehresmann said the positive test could be from a resident, staff person or contractor who was in the facility during their infectious period. Only facilities with 10 or more residents are listed, and she cautioned against jumping to conclusions about the facilities.

"This is not intended to suggest that these facilities are in any way not doing the right thing by their residents. It's simply being transparent," she said. "The fact that some facility is listed on our website does not mean necessarily that there is a flaming crisis within that facility."

The Health Department Monday also began listing deaths by county, including Hennepin with14, Martin with four and Ramsey with three. Dakota, Olmsted and Winona counties each have two deaths. Chisago, Scott and Washington each have one.

Walz addressed the ongoing pandemic in his State of the State address on Sunday night. Also on Sunday, Walz sent a letter to President Trump requesting a major disaster declaration for the state, in response to the pandemic.Developments from around the state

Legislature back in session Tuesday for workers comp bill

The Minnesota Legislature will come into session Tuesday to vote on the latest bill tied to the coronavirus pandemic.

The bill provides first responders and medical workers access to workers compensation payments if they contract COVID-19 and are unable to keep doing their jobs. It covers firefighters, paramedics, nurses, doctors and care providers in hospitals, clinics or other health settings. Correctional officers are also eligible.

If the Legislature passes the bill, it would take effect immediately.

Negotiations had been occurring for more than a week, and Gov. Tim Walz said he was prepared to extend the coverage through executive order if lawmakers couldn’t come to agreement.

But the deal struck over the weekend has the backing of DFL and Republican legislative leaders.

Lawmakers are expected to take precautions and keep Capitol attendance as low as possible during the session that starts at noon for the House and 2 p.m. for the Senate.

Sunday was Palm Sunday — also observed by some as Passion Sunday. It marked the beginning of Holy Week.

For Christians, the days leading up to Easter are among the most holy of the year. But those celebrations look very different under statewide orders to shelter in place.

"One of the things we've had to sort out is how do you serve the assembly without the assembly there? Is virtual good enough?" asked Patrick Shebeck, senior pastor of St. Paul-Reformation Lutheran Church in St. Paul. "There are some theological potholes in that road."

He said that while they're working to figure out a "theologically sound" way to navigate those potholes, it's important to give each other grace during the transition.

He said he hopes that his church will find comfort in one thing: "The story is the same. We are just celebrating those things and observing them in a different way this year. But the story remains constant. "

As the number of confirmed COVID-19 cases in Minnesota approaches 1,000, neighboring Wisconsin has seen more than twice as many cases.

As of Sunday, Wisconsin health officials reported 2,267 confirmed cases and 68 deaths due to COVID-19.

That's an increase of more than 30 deaths over the weekend.

At least eight people in Minnesota are facing misdemeanor charges after prosecutors say they violated executive orders meant to combat the spread of the coronavirus.

In a series of directives in recent weeks, Gov. Tim Walz closed bars and restaurants, then schools, and then ordered Minnesotans to stay home.

David Schuster, 57, of Winnebago, Minn., was the first person charged with violating one of these orders. Faribault County prosecutors said he refused a police officer's request to close Schooter's Bar and Grill March 22, allegedly saying "this is communism."

Schuster could not be reached for comment. But ACLU of Minnesota Legal Director Teresa Nelson said criminal charges should be a last resort.

The Minnesota Judical Branch said seven other people in seven counties are facing similar charges. Nelson said that in some cases, the misdemeanors were added to charges for other crimes.

Minnesota Attorney General Keith Ellison has filed an enforcement action against a landlord in Pine County who allegedly disconnected utilities at his tenants’ home during the governor’s stay-at-home order.

In a press release, Ellison’s office claimed that Howard Mostad entered his tenants’ home in Sandstone against their wishes and disconnected their electricity, an attempt to pressure the tenants to vacate the property.

Among other things, Ellison’s office is seeking civil penalties of up to $25,000 per violation and restitution for the residents.

“Most people, businesses and landlords are doing the right thing during the crisis,” Ellison said in a statement. “For those landlords who aren’t, let this case serve as a warning to you: If you take illegal actions to force your tenants to vacate their property during this emergency, my office will take swift and strong action against you.”

Ellison’s office has a hotline for people who think they are being wrongly evicted during the coronavirus emergency.

Walz’s office halted evictions during the coronavirus outbreak in mid-March.

The Minnesota Multi Housing Association, the state’s primary landlord association, is also asking its members to adhere to the executive order, calling on rental property owners to halt evictions on renters, waive late fees and provide residents with more flexible payment plans until May 31.

Minnesota bracing for possible budget deficit because of COVID-19: The fiscal chaos stirred by the coronavirus is so worrisome that a new economic forecast will be ordered to get a better handle on the problem and clear the use of the state’s rainy day reserves. It’s a stunning reversal from just a month ago, when officials forecast a projected surplus of $1.5 billion that would pile up by July 2021.

Is it safe — and ethical — to send your child to day care?Parents of Minnesota’s littlest learners are facing a dilemma: Do they continue sending their kids to child care during the COVID-19 pandemic? Minnesota’s stay-at-home order does not prohibit families from taking their kids to day care, but officials note that the goal is to keep providers open specifically for the children of emergency workers.

Even outside on a trail, 6 feet of distance is necessary: The stay-at-home order allows people to go outside; most parks and trails remain open in Minnesota. However, open spaces and fresh air don’t guarantee safety from COVID-19. Here’s some advice from the DNR and health experts for following the governor’s order and staying safe outside.

To read the original story and read related CVOVID-19 reporting, follow this link to the MPR News website.  https://www.mprnews.org/story/2020/04/06/latest-on-covid19
News