Qorsho Hassan, a fifth grade teacher at Gideon Pond Elementary in Burnsville, relishes being physically present with her kids, and is finding it hard to be away from them during the coronavirus pandemic.

Still, she has studied up on new technology, reworked her lesson plans and was prepared to turn her physical classroom into a virtual one when Minnesota’s experiment with distance learning began this week.

But when she checked in on Monday with her class on Seesaw, a digital platform that allows teachers to communicate with students and parents, she kept getting error messages. Her students were unable to access any of the video, audio or notes she’d posted for them.

She turned to the other district platform her district uses, Schoology, but it also crashed.

The experience was “overwhelming for a lot of teachers, but it just kind of sent me over the edge,” Hassan said. “Things like this frustrate me because I know that parents and families that are already experiencing stress now have the additional stress of having to navigate an app that should be working, but wasn’t.”

As hundreds of thousands of Minnesota students attempted to learn from home this week, the experiment was punctuated by widespread technology failures, overwhelmed parents and deepening inequities.

While there were also some silver linings during the week, Gov. Tim Walz on Thursday appeared to confirm what many students and their families had suspected, and maybe even dreaded: He said it was unlikely that schools would reopen before the end of the academic year. 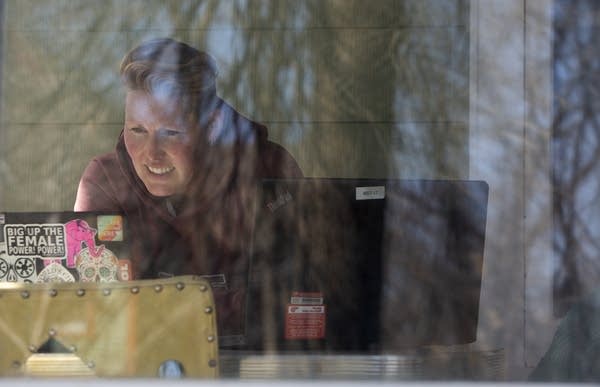 It wasn’t just Hassan’s district that experienced problems with digital learning platforms. Crashes, slowdowns and error messages were widespread across the state and the country with programs like Schoology, Seesaw and ClassDojo.

Anthony Padrnos is the executive director of technology for Osseo Area Schools. He said many teachers in his district as well as other districts in the state were not able to log in to platforms like Schoology or Seesaw throughout the day on Monday.

“As we dug in and were working with Schoology, we learned through the process that with all of Minnesota going online for distance learning and a multitude of other states, they just had a lot of users trying to go into their site at the same time,” Padrnos said. “They weren't completely ready to handle the load and the volume."

In an email to Padrnos, Schoology said the number of concurrent users on Monday was the highest it had ever been in its 10-year history.

Padrnos said many of his district’s tech issues with Schoology had been resolved by Tuesday, but Hassan and other Minnesota teachers said they were still getting error messages and slowdowns through Wednesday evening and Thursday morning.

Beyond technical failures, many Minnesota parents reported feeling overwhelmed with the number of emails, apps and different, confusing and sometimes unhelpful materials they were getting from schools.

Education officials have stressed to parents that it’s not necessary they home-school their children.

“We are not asking for parents and guardians to become teachers or educators of their students, of the content they would learn during the school day. That is still the responsibility of the educators,” Heather Mueller, Minnesota’s deputy education commissioner said last week.

But that is perhaps easier said than done for those families whose children are young or need more support.

Zinet Kemal lives in Blaine with her husband and four children, ranging from 5 months to 10 years old. This week, she started a new job in cybersecurity. Her husband also works full time from home as a software engineer.

She’s been trying to get her kids to treat their distance learning as actual school time. She has them get dressed in the morning and tries to stick to a schedule. But the balancing act between working full time, nursing her youngest, and keeping everyone on task is overwhelming.

“I don’t know what the expectation is for parents who are supposed to work and at the same time manage distance learning,” Kemal said. “Today, I couldn’t help my daughter with anything.”

She said her 10-year-old was better suited to learn independently, but her younger children need their parents’ help.

“[Distance learning] might be better if both parents are not working,” she said. “They come and say, ‘What do I do next?’ And I say, ‘I have to finish this and then help you.’”

While many families struggled to keep up with information from schools, other parents with more time and resources said they were looking for materials beyond what schools were giving them. 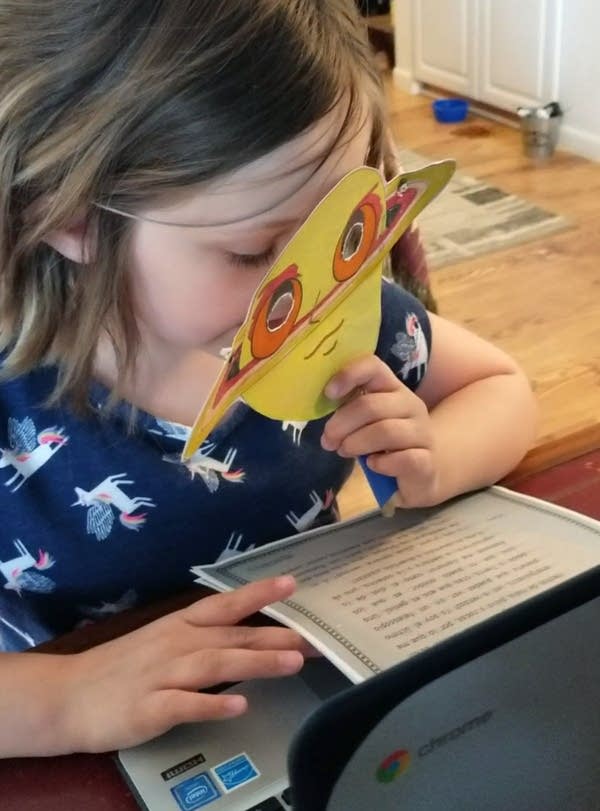 Caroline Wedel plays Saturn as she performs in a play about the solar system. Photo: Courtesy of Jennifer Wedel

She knows she’s been lucky enough to be able to cut back her hours to help launch distance learning at home for her 7-year-old daughter, Caroline, who’s in Little Canada Elementary’s Spanish immersion program.

“I’ve been able to sort of hear the message, ‘Take it easy, you’re not trained as a teacher. Connecting with your child is more important than teaching them the multiplication table,’” Wedel said. “I had to spend some time reeling myself back in to create some reasonable and achievable goals that work for my specific family and situation.”

Wedel has chosen to pay for her daughter to take private livestreaming ballet, drawing, Spanish and literature classes that include interaction with other kids and teachers. And Wedel’s father is chipping in his time with piano and typing lessons. Wedel has also begun slowly folding in materials from her daughter’s school

But helping her daughter with distance learning has meant a huge interruption to Wedel’s work.

Minnesota’s education system was plagued with disparities before the pandemic. An emergency plan that closes schools and attempts to continue learning remotely could likely widen those gaps.

Where children from stable or well-off families may get through the crisis relatively unscathed, some educators worry that students and families who face higher hurdles are at risk of bearing the brunt of school closures more acutely.

Suzanne Blum Grundyson is a middle school special education resource teacher at Brooklyn Middle STEAM School in Brooklyn Park. She’s spent time the last two weeks reviewing other teachers’ plans and making suggestions for adjustments that might help some of her students with special needs.

This first week of distance learning has been full of phone calls, emails and online sessions with students, checking in with them, trying to help with assignments. 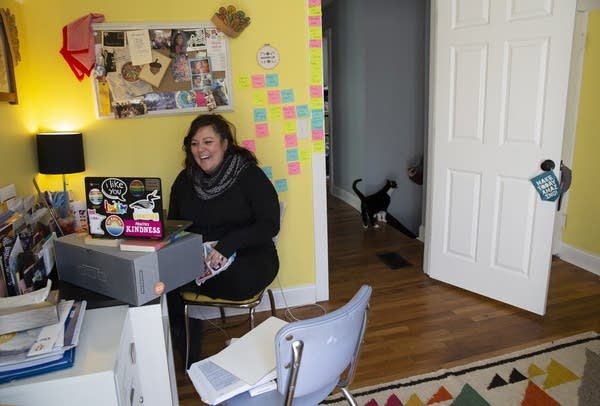 One of Blum Grundyson’s students is a seventh grader with a learning disability whose parents speak minimal English. Blum Grundyson said the hardest part of his week has been trying to figure out his own school work while also helping his elementary-age siblings navigate their distance learning.

“I do think the equity issues are going to extend more so to those kids really at the margins. And we know that’s what happens. People at the margins are the ones who get most severely impacted whenever things like this happen,” Blum Grundyson said.

Still, Blum Grundyson said she’s seeing some silver linings in her work. She’s been able to spend more one-on-one time with students who really need it, including the seventh grader who’s looking out for his siblings. And some of her students who deal with anxiety have been thriving at home, doing school work at their own pace.

“A lot of the things that they struggle with, those stressors are gone. They're not having to navigate a building with 1,100 other people and follow a different person’s rule every 48 minutes,” Blum Grundyson said. 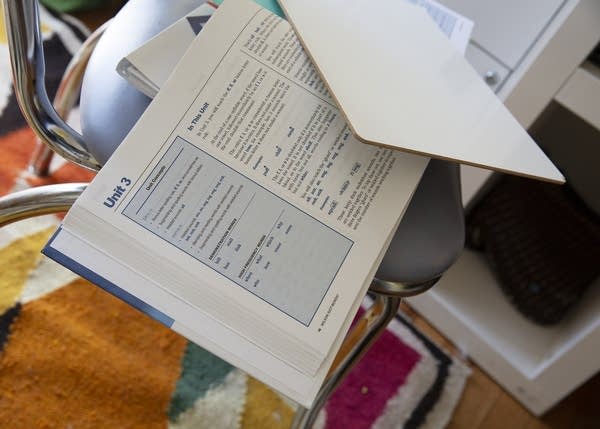 She’s seeing some positives and a lot of learning opportunities for teachers and families alike, but she’s frustrated by the limits of distance learning.

Walz has said the chance of students being able to physically gather for the rest of the school year is “relatively slim.” It’s a situation he called “heartbreaking.”

He’s promised to continue looking at data and consulting with health and education officials about the timeline.

“Nothing replaces seeing someone and looking them in the eye and smiling at them and, you know, being able to tell how they feel,” Blum Grundyson said. “We’re all just hoping this is temporary.”

To read the original story and hear an audio report of this article, follow this link to the MPR News website.  https://www.mprnews.org/story/2020/04/02/tech-frustrations-inequity-and-silver-linings-minnesotas-fi...