A closed sign is posted at the playground at Grandview Park in South St. Paul on Monday.
Photo: Andrew Krueger | MPR News

Deaths from COVID-19 in Minnesota now stand at 17, up five from Tuesday, with 27 people in intensive care and 689 testing positive since the pandemic began, up from 629.

Of those 689 total cases, 342 — about half — have recovered to the point they no longer need to be isolated, the state Health Department said Wednesday.

Gov. Tim Walz and state health leaders are briefing reporters now. Among the latest changes, Walz said that while this year’s open water fishing season will go on, the Governor’s Fishing Opener weekend, an annual celebration that had been set this year for May 7-10 in Otter Tail County, has been canceled.

Asked whether he anticipated extending his stay-at-home order beyond April 10, Walz said he expected to decide “early-to-middle of next week” based on the data.

The newest Health Department figures on cases and deaths come as state officials continue to seek out and secure sites to set up regional alternative hospitals to meet an expected surge of cases.

Walz on Tuesday said the latest modeling suggests COVID-19 hospitalizations could peak in late May in Minnesota as the coronavirus spread continues at a rapid pace. However, the governor said the surge could come two weeks earlier or later and that the state must be ready sooner.

State officials are aiming to add 2,750 hospital beds, 1,000 of which would be in the Twin Cities metro area. 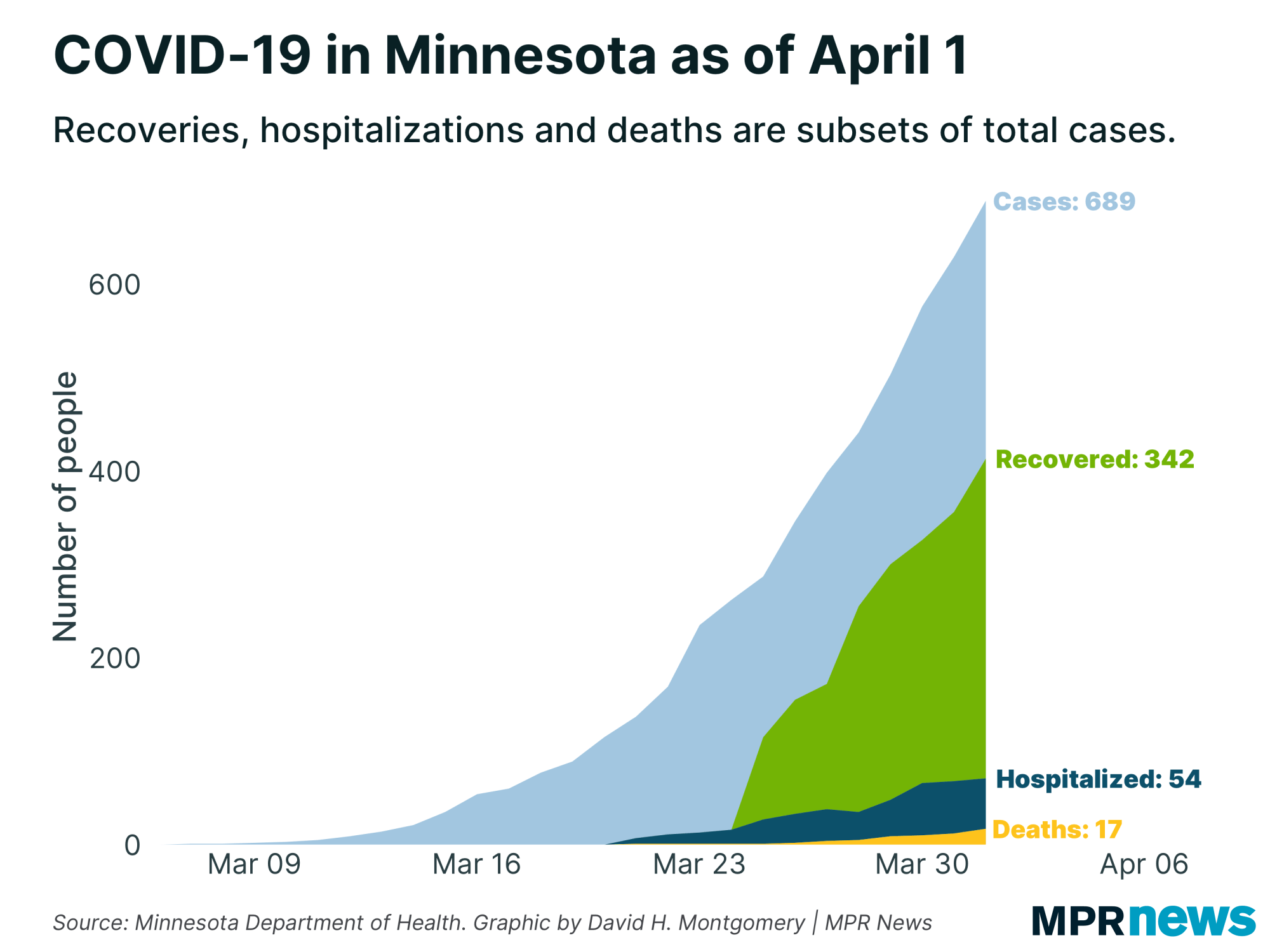 With holidays coming up next week, State Health Commissioner Jan Malcolm Wednesday urged people to avoid gatherings with "anyone outside your household group." Difficult as it is, she said it will help hold down the spread of coronavirus and the COVID-19 disease.

As state officials plan for the surge of COVID-19 illness, the economic fallout from the disease and its spread continues.

Grove said jobless applicants should expect to receive unemployment compensation “a week or two after you apply, and we will backdate from the day you were separated from your work.”

Walz said that he was “deeply concerned” about the financial hit businesses and citizens were taking now and expressed hope that state and federal rescue packages will “at least keep people afloat” during the crisis.

Gov. Tim Walz and Minnesota’s new prison ombusman are asking lawmakers to consider a proposal to reduce Minnesota's prison population to slow the spread of the coronavirus. A Moose Lake inmate and a staff member at the Red Wing juvenile facility each tested positive for the coronavirus over the weekend, according to the state Corrections Department.

State prison ombudsman Mark Haase said it's difficult to maintain social distancing behind bars and inmates who are due to be released soon should be let out early.

"Unless we thin out the population in our prisons, I'm really concerned that we're not going to be able to manage the situation," he said.

Walz says he'd consider an executive order to do that, but would prefer to have approval from the legislature. The DFL governor said at least one inmate has already been released ahead of schedule.

Minnesota Attorney General Keith Ellison says his office has seen an increase in reports of price-gouging for essential items, as well as online phishing attempts to get people's information.

"That email may say if you don't call immediately, your computer is going to break down or you don't, or they may say where we have a mask that you can get or we have tests that you can get to the COVID-19 or some sort of really enticing offer,” Ellison said that's over the top or some sort of threatening, scary situation that makes people feel that they really have to respond."

Susan Adams Loyd, president and CEO of the Better Business Bureau of Minnesota and North Dakota, said people also should be wary of fraudulent offers related to the upcoming federal stimulus checks.

Ellison urges people to call the attorney general's office or the Better Business Bureau if they are suspicious about a call or email.

Expired licenses to be considered valid for several more months

People whose license or ID card lapsed during the ongoing coronavirus epidemic will get a reprieve. Under a law that Gov. Tim Walz signed last weekend, expiration dates will be pushed out until the health emergency is over.

The new expiration date will be two months after Walz lifts a peacetime emergency.

The federal government has already delayed its Real ID deadlinefrom October of this year to October of 2021. That is key people who will eventually need that card or another security-enhanced ID to get through airport security or into various federal buildings.

Minnesota vehicle registration won’t be granted extensions because people can still do that function online or by mail. Currently, car owners have 10 days beyond the end of their annual registration month to display updated stickers.

Data shows how COVID-19 has affected group care facilities in Minnesota: Nearly 10 percent of the state’s 629 confirmed cases have been in congregate care settings, state health officials say. Of the 12 deaths, the majority are of people in their 80s who live in nursing homes or other long-term care facilities. See a breakdown of the confirmed COVID-19 cases in group care residences.

Minnesota's COVID-19 hotspot isn’t in the metro — it’s in one southern Minn. county: As the number of positive COVID-19 cases in Minnesota continues to rise, the highest concentration of cases per capita isn’t in the Twin Cities — it’s in Martin County. Officials there worry about how to tamp down community transmission, when they don’t know why the coronavirus has spiked in their county in the first place.

Stuck at home? Many deciding it's a good time to spruce it up: As many of us are slowing down under Minnesota’s stay-at-home order, some businesses are speeding up — paint and hardware stores, for example. For some Minnesotans, staying at home means a chance to tackle home improvement projects.

Essential workers say employers not following work-from-home, safety precautions: During the first week of Walz’s stay-at-home order, workers are questioning whether their jobs are truly essential and say they fear contracting the coronavirus at work. Others say their employers won’t allow them to work from home.

First responders seek workers compensation pledge amid COVID-19 outbreak: Minnesota first responders, health care workers and other public employees want a change in state law that would guarantee them the opportunity to claim workers’ compensation if they contract COVID-19. State lawmakers omitted the proposal from the package of coronavirus measures they passed last week.

100th anniversary commemoration of Duluth lynchings postponed by COVID-19: The organizers of a day of remembrance to honor the victims of a brutal lynching that took place in Duluth a century ago said they would postpone the event until 2021. “Postponing the June 15 gathering and commemoration is the safest and most responsible thing for us to do,” organizers of the Clayton Jackson McGhie Memorial event said in a statement.

Health officials for weeks have been increasingly raising the alarm over the spread of the novel coronavirus in the United States. The disease is transmitted through respiratory droplets, coughs and sneezes, similar to the way the flu can spread.Government and medical leaders are urging people to wash their hands frequently and well, refrain from touching their faces, cover their coughs, disinfect surfaces and avoid large crowds, all in an effort to curb the virus’ rapid spread.

To read the original article and see related COVID-19 reporting, follow this link to the MPR website.  https://www.mprnews.org/story/2020/04/01/latest-on-covid19-in-minnesota
News