'We'll get through this': Tribal nations prepare for COVID-19 The Red Lake Nation is one of several Native nations in Minnesota that has issued a stay-at-home order to its members, as part of its ongoing efforts to stave off the spread of the new coronavirus. Red Lake has also enacted a curfew for tribal members on its reservation in northwestern Minnesota.  Photo: Max Nesterak | MPR News 2019

In the best of times, the health care available to members of Minnesota’s Native American tribes is stretched thin.

But as they watch the number of confirmed COVID-19 cases rise statewide — and mobilize to prepare for it to reach their communities — tribal leaders know they will quickly be overwhelmed if the virus surges in Indian Country, where health care comes in a patchwork of federal, tribal and private providers, and where poverty often means crowded housing and high rates of chronic health problems.

"We have never been in this position before, in this lifetime,” said Kevin DuPuis, chairman of the Fond du Lac Band of Lake Superior Chippewa, as he urged band members to take the virus seriously.

In many Minnesota reservation communities, poverty and a lack of access to adequate housing mean that several generations of a family — or several families — might live in a single home.

American Indians have high rates of chronic diseases like diabetes and respiratory illness, which can increase the severity of COVID-19 cases. Those factors, combined with limited access to health care, put tribal communities at a higher risk compared to the rest of the population, said Donald Warne, director of the Indians into Medicine program at the University of North Dakota in Grand Forks.

"We do have to be cognizant of the fact that we're going to have pockets of extremely high rates of disease within particular households because of overcrowding,” he said. “I really do fear some of the negative outcomes of this pandemic in tribal populations."

The ability of tribes to prepare for and respond to this pandemic varies. Some have more resources than others. And most don't have the capacity to care for critically ill patients.

Leaders know it’s likely only a matter of time until the fast-spreading disease — which, in three weeks, has seen exponential growth across Minnesota — touches their communities. So as they plan for the worst, tribal leaders are also trying to put practices in place aimed at slowing the spread of the disease.

The series of executive orders Gov. Tim Walz has issued in the state’s attempts to mitigate the coronavirus outbreak — moving school instruction online, canceling events and requesting that residents work remotely when they can, and stay at home for the next two weeks — don’t apply to residents of the state’s 11 sovereign tribal nations. But tribal leaders say they have been working closely with the governor's office and the state health department. And many have put in place similar stay-at-home orders.

The Red Lake Nation in northwestern Minnesota also enacted a curfew last week, banning all travel except for travel related to employment and medical reasons between 10 p.m and 6 a.m., until further notice. Tribes have also temporarily closed casinos, cutting off a key source of jobs for tribal members and revenue for tribal government.

The Fond du Lac Band of Lake Superior Chippewa has temporarily closed its Fond-du-Luth Casino in Duluth and Black Bear Casino in Carlton — and is among the tribes that has issued a stay-at-home order.

“Most importantly, whatever your belief is — whether it be Christianity, whether it be our way of life — exercise that,” he said in a Facebook video.

“Put out your tobacco, smoke your pipes, put out your dishes in the evening. … Respect one another in their belief and we'll get through this.”

The health care available to Minnesota’s Native nations is a patchwork of tribal, local and federal government services, many of which already struggle under the stresses of inadequate resources and significant demand. The federal Indian Health Service is often the primary provider.

Some tribes operate clinics and run public health departments. Others rely on local and federal health care facilities. The IHS has small hospitals in Cass Lake on the Leech Lake Band of Ojibwe’s reservation in north-central Minnesota, and in the town of Red Lake on the Red Lake Nation. 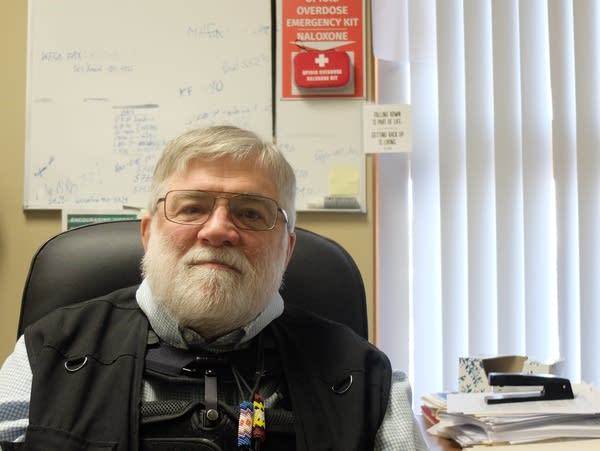 On the White Earth Reservation in northwestern Minnesota, public health medical director Dr. Carson Gardner said his department has about three to four weeks' supply of masks and other protective gear for tribal health workers to use when they need it. The department stocked up on the supplies several months ago, as part of a long-term planning process.

The White Earth Nation is planning to set up a temporary hospital to care for patients who are not critically ill, in case critical care hospitals outside the reservation become overwhelmed. The tribe has set up a hotline for people to call to ask for help. But Gardner said they’re getting a lot of calls they didn’t expect.

"We have a lot of dedicated people who are calling the on-call line — not to ask for help, but to offer themselves as volunteers to help," he said.

On the Leech Lake band’s reservation, tribal health director Brian Brunelle and his team have set up an emergency operations center. The tribal council has declared a public health emergency and enacted a stay-at-home order. But like so many communities, Brunelle and his staff are scrambling to get adequate personal protective equipment for tribal health care workers at several clinics.

Tribes struggle for adequate health care funding and supplies even when there’s not a pandemic. The level of funding for Native communities is far below the U.S. national average.

"We have been at the bottom of the list for health issues forever. Since the beginning of Indian Health Service, it's never been funded at the level of any other help system," said Dr. Mary Owen, a physician and director of the Center of American Indian and Minority Health at the University of Minnesota Medical School's Duluth campus.

Government reports have point to aging facilities across Indian Country. One IHS report found the agency has only half the capacity it needs to serve American Indian populations — and that's under pre-pandemic conditions.

The Indian Health Service office in Bemidji serves Minnesota, Wisconsin and Michigan. Across that region, Owen said, half of the approved positions for doctors are currently vacant.

"In a system where we get less than half the amount for health care per patient than the national average,” she said, “we're just that much further behind when we get hit by something like this."

IHS officials did not respond to an interview request or questions posed in an email from MPR News. But in a press release last week, the agency said it will begin distributing $134 million to American Indian and Alaska Native communities to expand their response to the coronavirus pandemic.

The agency has also said the recently passed $2 trillion federal coronavirus aid package contains about $1 billion for its own coronavirus response. The agency serves 574 federally recognized tribes across the United States.

While many Minnesota tribal communities are isolated, located in rural areas often far from services such as critical care hospitals, tribal officials are also concerned about members from urban areas returning home during the pandemic — and inadvertently bringing the coronavirus with them.

There are close family ties between remote reservations and urban areas, where many band members live.

"Seventy percent of us are urban. And people tend to want to be with those that they're close to in these anxious times, and [they] are going home to these tight-knit communities,” said Owen. “So yes, this disease can spread back and forth, and likely will."

Several tribal governments are urging people not to travel outside reservations during the pandemic, but are not restricting band members’ movements.

In a video posted to the Red Lake Nation’s Facebook page, Chairman Darrell Seki urged tribal members to protect elders, who are particularly vulnerable to the disease, and told them that tribal officials are establishing emergency food supplies from the reservation’s natural resources to be distributed if necessary.

“At this time, we have a reserve of 10,000 pounds of walleye and a half-million pounds of wild rice,” Seki said.

He told band members to remember the resilience of their ancestors.

“We have survived together for 500-plus years as Anishinaabe from Red Lake Nation,” he said. “We will survive again.”

On the Mille Lacs Band of Ojibwe’s reservation in central Minnesota, March is usually a time when the tribe celebrates a lengthy struggle that culminated in a 1999 U.S. Supreme Court decision affirming the band’s treaty rights to hunt, fish and gather.

That celebration didn’t happen this year because of the coronavirus. Mille Lacs Band Chief Executive Melanie Benjamin said the tribe’s focus now is on fighting the pandemic’s spread.

“When I think about the Mille Lacs Band of Ojibwe, I think about the resilience and the strength that the people have through their DNA from all their ancestors,” she said. “And so for us to work together, to support each other, hopefully we’ll get through this.”

On the White Earth Reservation, tribal officials are using a casino kitchen to prepare meals that are being delivered to elders and other residents in need. They’ve also sent elders a packet of traditional medicine.

But across Indian Country, leaders worry that once again they will be at the bottom of the list for help from the federal government, relying on the strength and creativity of their communities to fight the pandemic.

To see the original article and read related reporting, follow this link to the MPR News website.  https://www.mprnews.org/story/2020/03/31/tribal-nations-face-greater-risk-as-they-prepare-for-covid1...