Twelve people have died from COVID-19 in Minnesota, up from 10 reported on Monday, while the number of cases in the state since the pandemic began has jumped to 629, state officials said.

Twenty-six people remain hospitalized in intensive care. Of the 629 people testing positive to date, 288 have recovered to the point where they no longer need to be isolated, the state Health Department said.

Updating reporters Tuesday, Gov. Tim Walz said the state’s modeling suggests the peak for hospitalizations could be pushed into late May in Minnesota, although that could happen two weeks earlier or later.

Officials expect to update the projections, but Walz said the state needed to be ready now in case the surge came earlier. “Sometime here in the next four weeks, we need to be prepared for that to be upon us,” he said.

Reports show the virus surfacing in counties across the state, including Martin County on the Minnesota-Iowa border, where 25 people have tested positive for COVID-19 and two have died. 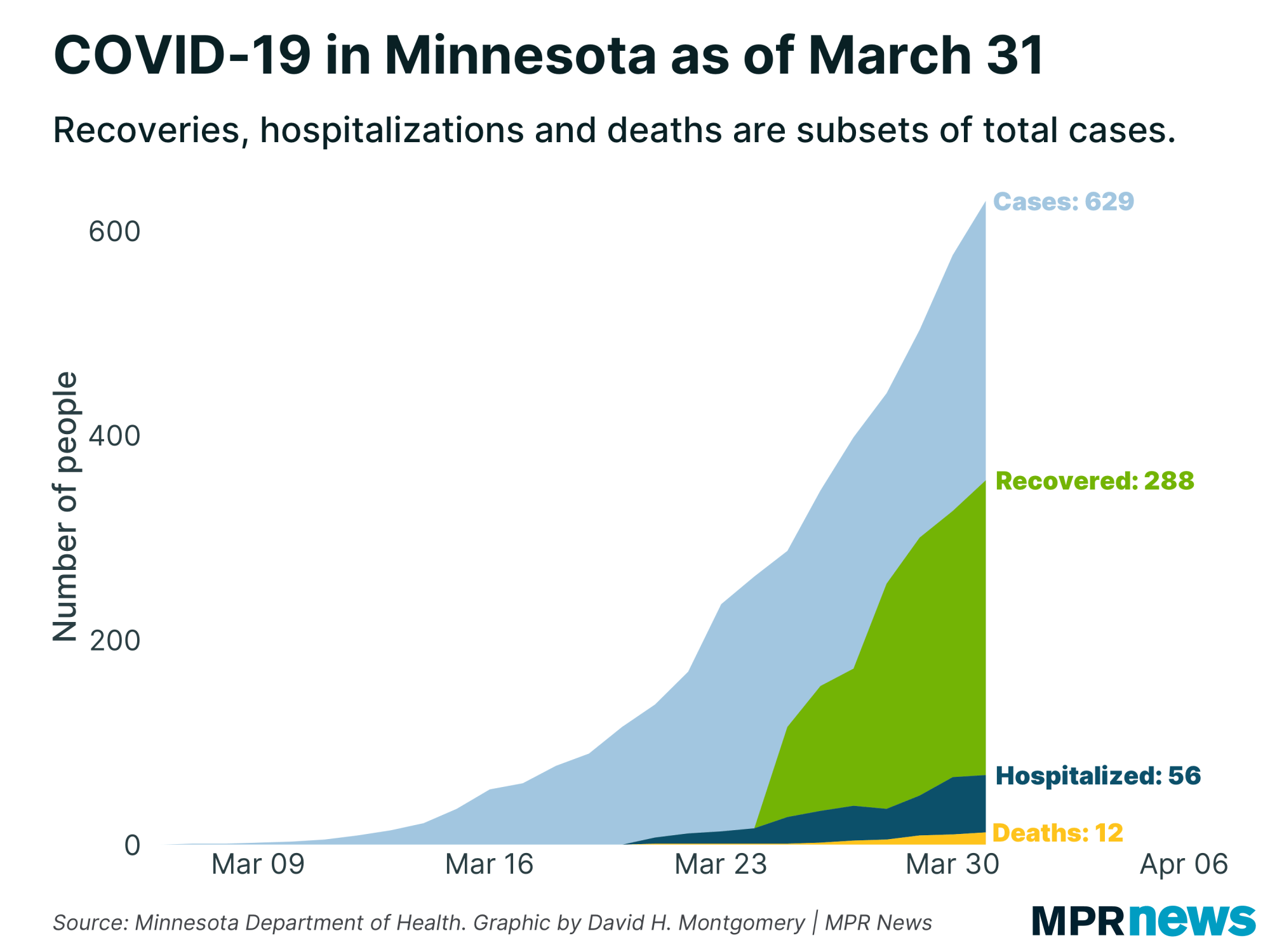 “I definitely have the sense that the community is scared,” said Chera Sevcik, community health administrator for Martin and Faribault counties. While it’s not clear why the area has the highest number of cases outside the Twin Cities, Sevcik said she and local leaders are meeting regularly on ways to check the spread.

Other cases include a central Minnesota drug and alcohol treatment and recovery program in Brainerd reporting a confirmed case of COVID-19. A local college president in southwestern Minnesota became the first confirmed case in Brown County.

The age range of those infected with COVID-19 in the state runs from 4 months to 104 years. Kris Ehresmann, the state’s infectious disease director, said Tuesday the 4-month-old is doing well now.

Minnesotans from 58 to 95 years old have died from the disease, the Health Department said Tuesday.

Emergency management leaders continue to prepare for a surge of COVID-19 patients, scoping out sites that could become makeshift hospitals as the need for beds and intensive care units is expected to increase. The goal is to add 2,750 beds, with 1,000 of those in the Twin Cities metro area.

Authorities have OK’d five sites so far that would be able to accommodate some 600 beds, Joe Kelly, the state’s emergency management director, said Tuesday. He didn’t disclose their locations but said the plan was not to build out and stock all spaces immediately, adding, “I hope that we never need any of these care sites we’re working on.”

Walz said Minnesota continues to secure medical equipment and supplies it will need as peak illness and hospitalizations approach.

Most of the coronavirus deaths in Minnesota have been in group care facilities, which remain a primary concern. Jan Malcolm, the state health commissioner, said Tuesday that 39 such facilities now have at least one case of COVID-19 confirmed, up from 31 Monday.

Ehresmann said 173 health care workers in the state have tested positive for COVID-19 but that only a few of those so far involve spread to the worker from a patient or group living resident.

State economic officials continue to work through a surge of 250,000 unemployment claims driven by layoffs in the hospitality industry.

So far, the state has been notified of eight companies with layoffs of 50 or more, generating just over 4,000 layoffs. "Many of them are temporary, which is good,” said Employment and Economic Development Commissioner Steve Grove.

Minnesota officials say DWI arrests fell by more than half the first weekend after the state ordered bars and restaurants closed earlier this month. The state’s Office of Traffic Safety recorded 94 DWI arrests last weekend — compared with 293 over the same weekend last year.

“Regardless we want this to be zero, and it’s unfortunate that people still make the bad decisions and we still want people to obviously heed the governor’s message and take it seriously, but also we want to make sure people are not risking not only their lives, but the lives of others,” Shank said.

MnDOT says traffic on Minnesota roads also fell by nearly two-thirds in the Twin Cities over the weekend compared to previous years.

No big concerns on 1st weekend of stay-home order

State transportation officials said they saw a precipitous drop in traffic on the major highways over the weekend, down by nearly 60 percent in the Twin Cities and 55 percent statewide.

Minneapolis police said they found widespread compliance with the order, although they did have to disperse some gatherings on Friday night and Saturday. There weren’t any arrests or citations, and officers focused on education in their interactions, spokesperson John Elder said.

North Dakota officials said Monday that a second person has died from complications of the coronavirus in the state. The victim is a woman in her 80s from north-central North Dakota.

On Monday, health authorities in North Dakota ordered a two-week quarantine for anyone entering the state from foreign countries or states where the coronavirus is widespread. The list includes 24 states, but not Minnesota or adjacent states. They're also asking anyone returning to North Dakota from any other state to voluntarily quarantine themselves.

North Dakota reported 19 people hospitalized for treatment of COVID-19 as of Monday. The state's first COVID-19 death is a former Minnesotan. An obituary says 93-year-old Roger Lehne died last Thursday at the Veterans Administration Hospital in Fargo. Lehne was formerly of Mahnomen, Minn.

As of Sunday, Wisconsin had more than double the number of Minnesota cases — 1,112, with 13 deaths. Wisconsin and Minnesota have tested roughly the same number of patients, according to state data.

Iowa reported 336 cases and four deaths. To the west, South Dakota reported 90 confirmed cases and one death as of Sunday.

The Minnesota Department of Employment and Economic Development reported Sunday that it is processing a record number of unemployment insurance applications.

It's asking that new applicants follow a system to apply on a designated day, depending on the last digit of their Social Security number.

To read the original article and see related COVID-19 reporting, follow this link to the MPR News website.  https://www.mprnews.org/story/2020/03/31/latest-on-covid19-in-minnesota