Minnesotans are still trying to get back after some countries temporarily suspended air travel because of coronavirus concerns.

Jennifer Schmaedeke has booked eight separate plane tickets over the past several days hoping to get her daughter home from a study abroad trip to Morocco.

Schmaedeke’s daughter, Corrine, planned to study political science in the North African nation until May, but her program was halted because of coronavirus concerns. Then the government suspended travel to several countries and flights kept getting canceled.

“Corrine would call me and say, ‘You’ve got to book a flight right now, there’s one opening, make it happen,’ and she didn’t have internet, or sporadic internet, so she couldn’t always act on things right away.”

Schmaedeke said the U.S. embassy assured her daughter the Moroccan government would make flights available for visitors from other countries to return home. Corrine made it out on a flight to London on Friday. She had been staying alone in a hotel.

The Department of State says U.S. citizens are not required to register their presence abroad, and the government doesn’t keep comprehensive lists of U.S. citizens traveling or residing overseas.

It’s difficult to know how many Minnesotans are in the same position.

“We are considering all options to assist U.S. citizens in these countries,” a State Department spokesperson wrote in a statement, but did not specifically say what those options are.

As of Friday, the University of Minnesota Twin Cities reported nearly 1,000 students had already returned from their study abroad programs, but 239 were still overseas.

U of M faculty member Sehoya Cotner was in her eighth day of quarantine in Peru as of Monday. The associate professor led a group of students and faculty from around the world as part of a field biology course. Cotner said many in the group would likely have to stay there for at least another week after the 15-day suspended air travel order in Peru expires. 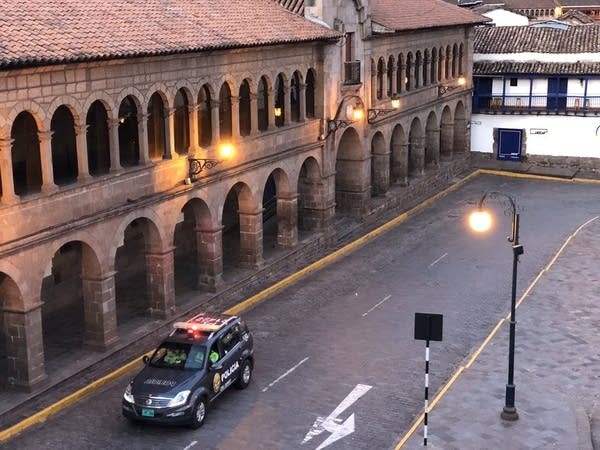 Many students and faculty from around the world, including U of M faculty member Sehoya Cotner, are forced to stay in Peru for at least another week after the 15-day suspended air travel order in Peru expires. Here's a view from a hotel where biology professor Brian J. Enquist of the University of Arizona is staying. "We can only go to grocery store and pharmacy. No one is allowed outside and no travel," Enquist said in his tweet.  Photo: Courtesy of Brian J. Enquist

Cotner said she still has no concrete information about repatriation. The constant talk, and the ambiguity, are the worst part of the experience, according to Cotner. But the students lift her spirits.

“They’re away from their families, there is so much uncertainty, but they are so resilient and positive,” Cotner said.

To read the original article and hear an audio story of this report, follow this link to the MPR News website.  https://www.mprnews.org/story/2020/03/23/travelers-from-minnesota-still-trying-to-get-home-after-cou...