A dog named Cori gets walked through the Animal Humane Society in Golden Valley on her way go home with her new family on Sunday.  Photo: Evan Frost | MPR News

As Minnesota residents hunker down for another week of social distancing, some of them will be sharing their home with a new cat or dog — pet adoptions that may benefit other animals in the weeks to come.

On Sunday, the Twin Cities' Animal Humane Society began a temporary closure to the public amid the coronavirus outbreak. But while adoptions are now on hold, it'll continue to take in strays and other animals that have to be surrendered due to an emergency.

It was essential they create space to care for those new animals in the coming weeks. So the shelter made a big push over the past week to find homes for hundreds of pets.

By Sunday morning, there were just a handful left.

"People certainly listened. We probably adopted out over 300 animals this week. And set a couple of record days," said Lisa Bonds, chief advancement officer for Animal Humane Society. "We had over 90 adoptions in one day at one of our facilities." 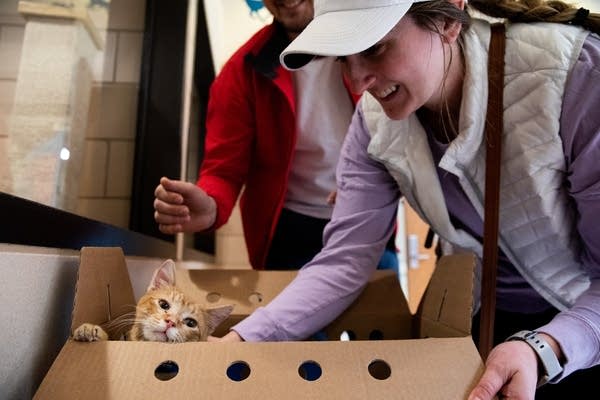 "When we saw that a lot of people were starting to stay home or work from home, we adopted out a lot of puppies because people were figuring they had the time to potty train and get to know their animals when they didn’t have to go into the office," she said.

Adoptions of all animals picked up in the days — and even the hours — before the temporary closure. 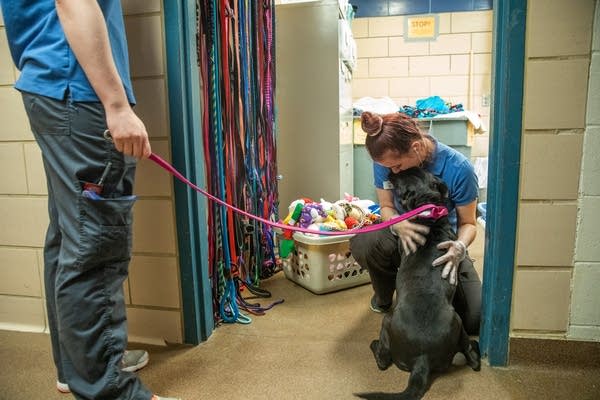 The Svoboda family was at the Golden Valley shelter on Sunday, waiting to meet the few cats that remained.

A couple months ago the Svobodas had to say goodbye to their cat, who developed bladder cancer. As they looked to adopt another, 11-year-old Cole Svoboda said he was looking for a new cat "that is energetic and wants to be with you."

His mom, Stephanie, and dad, Dan, said they were ready to bring a cat home right away, if they could find the right one.

"We’re ready. We brought the carrier with, but we’re not sure if we’re going to find one today," Stephanie said. 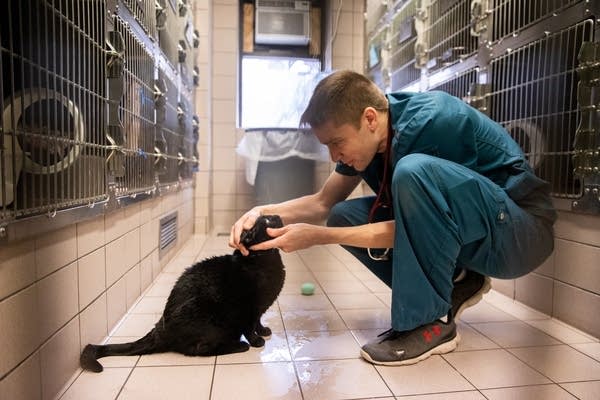 Animal Humane Society veterinarian Graham Brayshaw checks the eyes of a cat named Onyx at the shelter. "We can adopt the heck out of blind cats," Brayshaw said. Photo: Evan Frost | MPR News

"We are really looking at the same things every other business is looking at: What are the state and federal mandates that are out? Whether or not there are shelter in place requirements that will come forward," she said. "And when is it deemed safe and acceptable, from a public health perspective, for our services to come back online in a more normal way?"

They’re aiming to reopen on May 3, but that date could be moved up or pushed back. Dixon said another thing that's top of mind is her employees' anxieties.

"One of our biggest concerns is the financial impact on our employees," she said. "We have nearly 400 employees and more than 60 percent of them will be fully furloughed, so they’re relying primarily on unemployment insurance. And so we’re really hopeful and we are advocating at the state level for support to come forward for people who are temporarily losing their livelihoods."

In the meantime, they’re operating with a skeleton crew in Golden Valley to help care for the animals. They’re also offering curbside drop-off and pickup for people whose pets have veterinary appointments, and curbside intake for strays and surrenders. 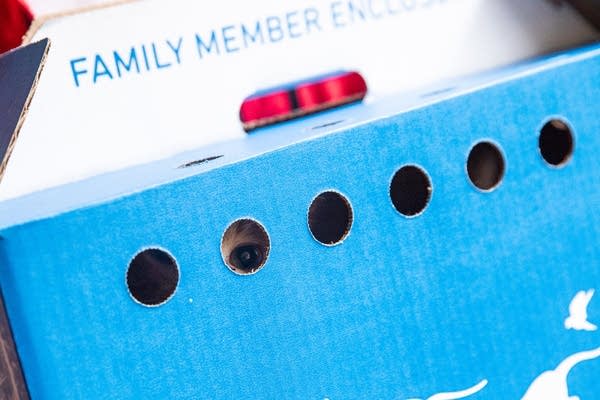 Cheddar looks through a hole in his box before being taken home by his new family.
Photo: Evan Frost | MPR News

Back in the shelter lobby on Sunday, Kelsie Meyer and Ryan Olson were waiting to take home their new orange cat named Cheddar.

"I actually didn’t grow up with cats at all. I grew up with dogs, but they’re always a really nice companion to have," Meyer said.

Meyer said they’ve been wanting to adopt a second cat for a while — and now seemed like a good time to give another animal a home.

To hear an audio report of this story and read related reporting, follow this link to the MPR News website.  https://www.mprnews.org/story/2020/03/22/before-minnesota-animal-shelter-temporarily-halts-adoptions...