In moment of coronavirus, Duluth distillery turns spirits into sanitizer Erin Otis fills up a bottle of sanitizer on Tuesday at the Vikre Distillery in Duluth.
Photo: Dan Kraker | MPR News

Vikre Distillery in Duluth has been surprisingly busy this week.

Its cocktail room is closed, along with the rest of the state's bars and restaurants. But people are still streaming in — not for a gin and tonic, but for hand sanitizer.

It’s a prized commodity in this era of COVID-19, the highly contagious virus spreading rapidly across the globe. Health and government officials have been urging the public to practice social distancing, wash their hands and disinfect surfaces to combat the virus’ spread.

Sanitizer is hard to find. Many stores have been cleared out. And even organizations that really need it, like health care providers and homeless shelters, haven’t been able to get it. Local distilleries around the country, from Georgia to Vermont and Oregon to Minneapolis, have started turning their spirits into sanitizer.

Vikre is still making gin, vodka, whiskey and other spirits at its distillery in Duluth's Canal Park.

And now, tucked away in the back of the building, past the quiet cocktail room and copper stills and fermenters, the company has set up its makeshift hand sanitizer production area. 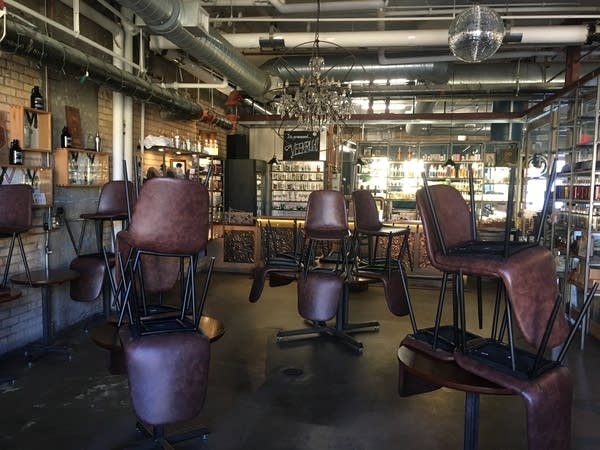 Vikre Distillery’s cocktail room, like the rest of the state’s bars and restaurants, is closed during the COVID-19 public health crisis. The company is sharing donations it receives for the sanitizer it's manufacturing with the 18 employees it furloughed who work in the cocktail room.
Photo: Dan Kraker | MPR News

Duluth resident Deb McLaughlin tried to find a big spray bottle to fill with sanitizer to take to CHUM, the city’s primary homeless shelter. But all the stores she contacted were out.

So Marshall Hardware in Duluth helped her retrofit a lawn sprayer, and gave her a big discount on the supplies. She then filled it up at Vikre Tuesday morning to take to the shelter.

“We’re used to snowstorms, and everybody pulls together when there’s a snowstorm. So this is sort of the whopper snowstorm,” she said. By bringing sanitizer to CHUM, she said, she was trying to help “expand the capacity of people doing the important work.”

Last weekend, friends sent Joel Vikre, who owns the distillery with his wife, Emily, articles about a distillery in Oregon that was making hand sanitizer to help fight the spread of the coronavirus.

By Monday morning, the Vikres had decided to do it, too. And that afternoon, they had their operation up and running.

As it turns out, making spray sanitizer was a pretty simple equation, Vikre said: "If you happen to be in possession of hundreds of gallons of ethanol, it’s an easy thing to do."

And it’s just three ingredients: Water, a compound that makes the solution too bitter to drink, and corn alcohol.

"This is actually organic,” Vikre said, “so our hand sanitizer — is organic."

Vikre stresses his company has been careful to follow World Health Organization and Centers for Disease Control and Prevention guidelines in making the sanitizer.

"According to the CDC, a 70 percent alcohol solution … is a good sanitizer for this virus and other viruses,” Vikre said. “So that’s what we’re producing." 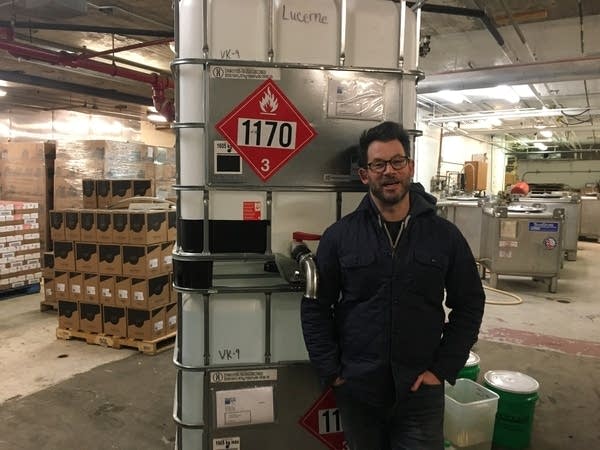 Right now, the product can only be used as a spray disinfectant. But demand has been so high, they've ordered the two additional ingredients they need to make the hand gel version: glycerin, which thickens it, and hydrogen peroxide.

Vikre says the effort is costing more than the company had anticipated. Because of the unexpected demand, he said, it will likely run in the thousands of dollars.

"But it’s worth it to us,” Vikre said. “This is the community that supports us, and this is something we can do to respond to the need right now."

Vikre Distillery is giving away the disinfectant for free — and they’re giving any donations that come in to the 18 employees they had to furlough when they were forced to close the cocktail room.

On Tuesday, the company handed out some 200 gallons of the sanitizer — and not just to individuals. They gave some to the Duluth Police Department. Grocery stores. The CHUM homeless shelter. Vikre says even Mayo Clinic called, requesting some.

He said they’re also working to make sure a federal excise tax on distilled spirits isn’t also applied to sanitizer. 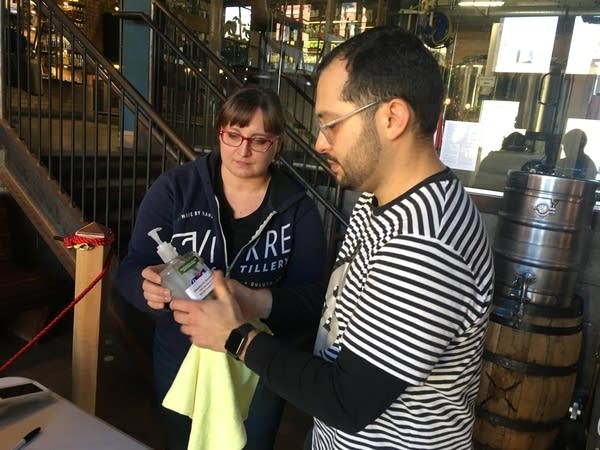 “Hopefully, we’ll be in good shape where this can be something the industry can do that’s significant and keep everybody safe,” he said.

Terri Wick works for Senior Friend Home Care, a home health care agency in town. She stopped by to pick up some sanitizer for work.

"We’re low on hand sanitizer, and the wipes, because of people hoarding too much of it,” she said. “We’re out on the front lines and we’re out, or very low."

"We have a half a bottle of hand sanitizer left,” Wick said. “So we’re going to be passing this out to all of our employees."

Duluth resident Chris Pascone stopped over, even though he didn't need sanitizer. He said Vikre's gesture shows how the community is in this moment together.

"We’ve got each other’s backs,” he said. “We don’t have to panic. We’re going to get through this. And if people just help each other it’s going to go a lot faster and a lot easier." 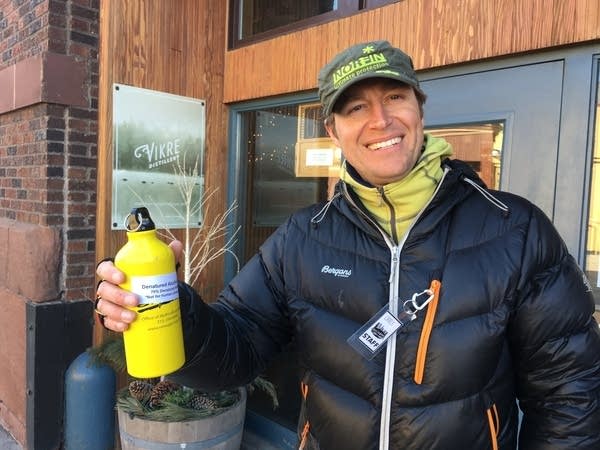 "Someone else was telling me the story about her wife, who has emphysema, and why this is so important for them to have in their house,” Larson said. “And Vikre is just providing it, no questions asked, that’s really amazing."

Vikre says the distillery will make the sanitizer for as long as it’s able — and that could be a while.

Since word got out about Vikre's "craft" sanitizer, the distillery has had a steady stream of people coming through the door — not just to fill up their bottles, but to thank the company for helping the community pull together.

To read the original article and see related COVID-19 reporting, follow this link to the MPR News website.  https://www.mprnews.org/story/2020/03/19/in-moment-of-coronavirus-duluth-distillery-turns-spirits-in...