During the winter months, Jacob Swedberg spends about half of his working hours walking across the 30 ice-covered lakes around Detroit Lakes, making sure anglers have a license and are following the rules.

Swedberg is a conservation officer with the Minnesota Department of Natural Resources. He has less than two years on the job, but he’s learned to rely on his instincts and observations when interacting with the public.

As he walks across Little Detroit Lake checking anglers’ licenses, he issues warnings to several who aren’t carrying their fishing license. That’s a common violation.

But when he finds a lone angler in a fish house with three lines in the water — one more than the rules allow — he writes a citation that will cost the man about $100. He’s not buying the story that another family member left moments ago and forgot to reel in the extra line.

"Sometimes I walk into a situation and I know instantly, just kind of a gut feeling,” he said. “Everyone has an excuse for something. It just: Do you believe what they say? Does this guy truly deserve a ticket, [or] a warning?"

Swedberg’s job is to enforce the laws that protect Minnesota’s natural resources, but the work is unlike that of most other law enforcement agencies: Conservation officers have wide discretion when it comes to issuing warnings or citations. And much of the time, they choose education rather than punishment as a means to enforce the law. 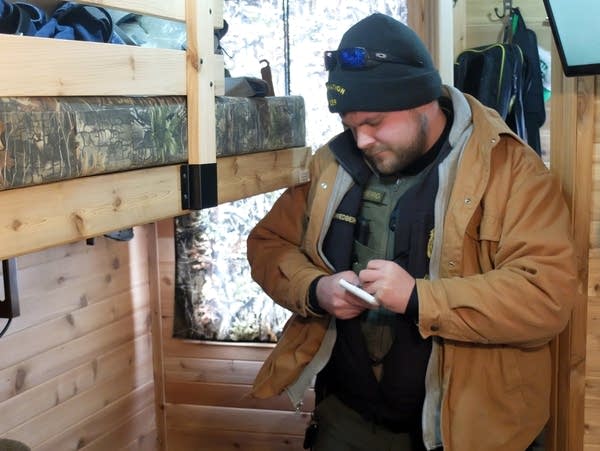 Conservation officer Jacob Swedberg writes down information for a citation while checking in on anglers near Detroit Lakes in January,  Photo: Dan Gunderson | MPR News

A review of the three most recent available years of DNR enforcement records show conservation officers opt to educate rather than cite offenders about two-thirds of the time, issuing warnings instead of the citations that come along with fines and paperwork — and that’s fine with agency leaders.

"We don't have a quota, as far as percentages between tickets and warnings. We let the officers make that decision in the field," said Greg Salo, assistant director of the DNR’s enforcement division. Educating violators with a warning is a key part of a conservation officer’s job, he said. "We don't look at any data in regards to the number of citations versus warnings."

Officers are encouraged to focus on certain offenses — youth ATV riders without helmets, hunters shooting baited deer or boaters failing to drain their equipment to prevent the spread of aquatic invasive species.

DNR data shows that from 2016 through the end of 2018, people illegally baiting deer were cited about 75 percent of the time they were discovered. But youth riding snowmobiles or ATV’s without a helmet were cited less than 30 percent of the time — and only 16 percent of boaters who failed to remove the drain plug on their boats were cited. That data was consistent across all three years.

The DNR wants to encourage hunting, fishing and outdoor recreation, Salo said. He contends that heavy-handed enforcement might sour people on those outdoor activities. Officers are taught that their job is to correct behavior — and sometimes, he said, education is most effective approach.

"They are given a lot of freedom in how they choose to enforce things because a lot of it is not black and white," he said. "We do put a lot of weight on our officers’ shoulders to make good decisions in the field — and for the most part, they really do."

The DNR’s 180 conservation officers are assigned a geographic area where they live and work.

The agency is authorized for up to 206 officers, but has had a hard time filling open positions. Officers mostly work alone, but sometimes join with colleagues on investigations or targeted enforcement actions. They also spend time teaching safety classes on guns, snowmobiles and all-terrain vehicles.

They enforce a wide range of laws that govern everything from hunting and fishing to ATV’s to wetland and lakeshore regulations. They respond to complaints about skunks in window wells, or injured deer on the road. They can also enforce traffic laws, and dozens of times a month, conservation officers across the state are called to back up sheriffs’ deputies or state troopers in their own law enforcement work, especially in rural areas with limited law enforcement resources. 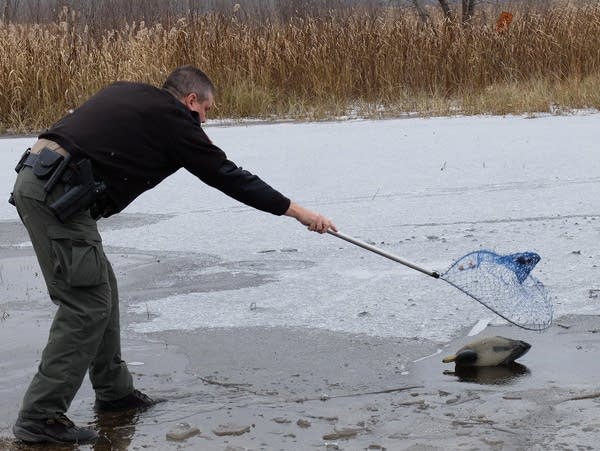 The DNR’s biennial budget is $1.1 billion. Of that, the annual budget for enforcement is $54 million. Money comes from a variety of fees and funds, so officers track the time they spend on enforcement tasks, because some — like fishing or boating safety — are paid for by fees the agency collects from activities like license sales.

In general, the DNR looks for officers who can work independently, have integrity, and make good choices, Salo said. “We decided about six or seven years ago to adjust our testing [and] interview process to give more weight to core values,” he said. “Those core values typically can’t be taught in our academy.”

The face of the DNR

A couple hours north of Detroit Lakes, Jeremy Woinarowicz covers hundreds of square miles in the northwest corner of the state, with few lakes and lots of open space.

He’s been with the DNR since 2004 — and in that time, the far northwest corner of Minnesota has rarely had all of its conservation officer posts filled. That means he’s often covering more than one territory.

He recalls being overwhelmed early in his career — especially during that first deer hunting season. 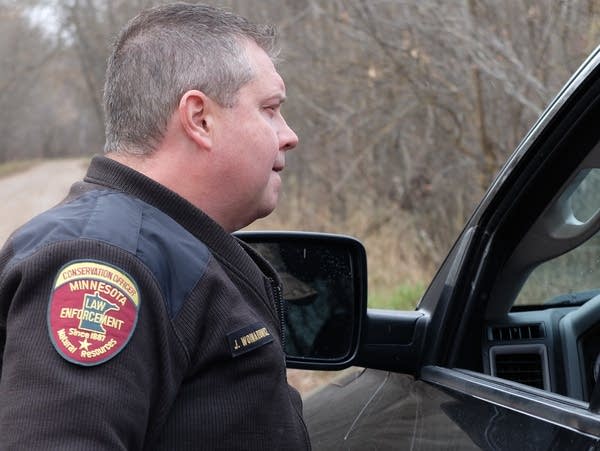 Those call-to-call situations are most likely to happen during a busy time, like the fall deer season. The reality is that, in this sparsely populated area of the state, many of Woinarowicz‘s days are made up of mostly windshield time.

"Our whole career is hours of boredom punctuated by minutes of excitement," he said.

There’s a bit of action as he drives through a small Pennington County town and sees an ATV driving down the street with no visible registration.

He follows it to a backyard, where a 14-year-old boy looks crestfallen when he sees Woinarowicz approaching.

“Am I going to get a ticket?” he asks plaintively. Woinarowicz runs through a litany of offenses: The ATV isn’t registered. The teen hasn’t taken a required safety course. Without a drivers license, he can’t legally drive on the street.

He was, at least, wearing a helmet.

The teen admits to the violations, but pleads his case. “I wasn’t ripping around or anything,” he said. Woinarowicz agrees and thanks him for wearing a helmet. He then calls the boy’s parents to say that, if he catches the boy breaking the law again, they will be the ones getting a citation. 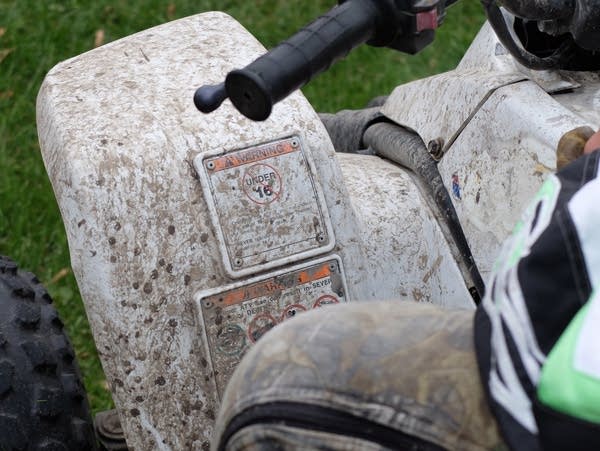 Conservation officer Jeremy Woinarowicz stopped one young ATV rider for a series of violations. Instead of issuing a citation, he called the teenager's parents to issue a warning.
Photo: Dan Gunderson | MPR News

“If you want the bad behavior to stop,” he said, “you start pinching mom and dad."

This situation could have resulted in several tickets. Instead, there’s a warning — and Woinarowicz promises to follow up by phone to make sure the violations are fixed.

“I don’t make a habit of citing 14-year-olds,” he explains as he walks away from the relieved teen, slumped on his ATV.

This was a judgement call. Before becoming a conservation officer, Woinarowvicz worked as a city police officer — and he was much more likely to write a ticket for obvious violations, he said. He’s more lenient in his work with the DNR.

Still, Woinarowicz writes citations at a rate higher than average, according to data provided by the DNR. Among conservation officers across the state, the ratio of citations to warnings varies widely.

Woinarowicz said there are some violations, like kids riding an ATV without a helmet, that almost always warrant a citation. But a conservation officer, he said, is always trying to balance enforcing the law with maintaining good relationships, because in the area they work, they are the face of the DNR. And he’s aware that handing out too many tickets can make for bad public relations.

"Obviously you don't want to be writing tons of tickets to folks that you sit next to in church, and you have to go buy groceries with and things like that,” he said, “but our job is to enforce the rules of Minnesota — and sometimes it takes a citation to get people to follow the rules.” 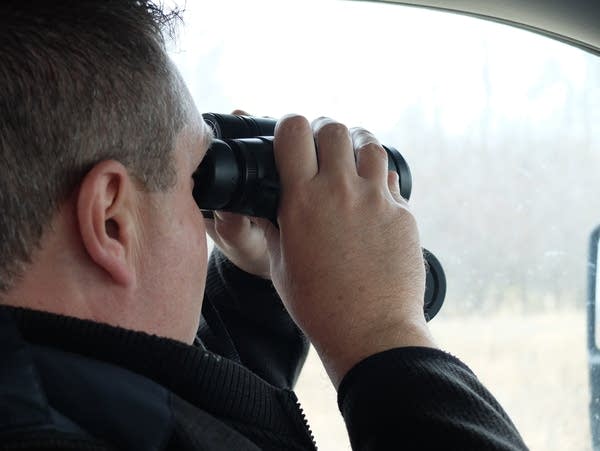 A conservation officer's job isn’t just checking licenses and enforcing hunting and fishing rules. There are dozens of laws protecting natural resources and regulating how people can recreate outdoors. Since they are sworn peace officers, they can also make traffic stops. And they sometimes need to enforce complex and contentious laws regulating lake shore development, or wetland protection. The enforcement division even has specialists who investigate complex land-use cases.

"I know there are folks that really despise me, don't like my name, and some of them I've written multiple tickets to for doing multiple things wrong. Some serious violations," Woinarowicz said. "But I'm also, I think, respected in the community. I've been elected to the school board three times."

And even though enforcement is one of the smaller divisions within the DNR, conservation officers often take the brunt of the questions — and the criticism — directed at all parts of this big, complex agency which is charged with both protecting natural resources and regulating their commercial use.

"If I'm out here, they could ask me a question that's like, 'So what should I do if I have certain trees in my yard?'” Swedberg said. “And I’m like, 'I don’t know.' But they don't see us as enforcement, they see us as The DNR."

Approach stays the same as the role evolves

The wide range of subjects conservation officers are expected to know can be daunting, said Salo, one of the enforcement division’s leaders. There are multiple hunting seasons with different regulations in different parts of the state. Individual lakes have unique fishing regulations. There are ATV and snowmobile rules, and wetland and lake shore regulations.

"It's just such a wide gamut that you're kind of the jack-of-all-trades, master of none," he said.

And the job is getting more complex. Technology is adding challenges. People trying to avoid hunting regulations, for instance, now use remote trail cameras that send photos to a cell phone so they can monitor the movements of conservation officers and avoid getting caught breaking the law. Salo said that's one area where laws lag behind technology.

And the ways in which people use the outdoors are also changing.

“Hunter numbers and license sales are going down, it's no secret," he said. "And other activities are going up — and how do they fit into our enforcement world?"

Outdoor activities that don't involve hunting are getting more popular. Salo points to the growth in kayaking, stand-up paddleboards and fat tire bikes.

"All these different outdoor recreations that normally aren't in our wheelhouse are going to be in our wheelhouse,” he said. “It just seems like the bucket keeps getting more full every time.”

And while the agency continues to adjust its work to manage those changing dynamics, Salo said he expects its conservation officers to maintain their focus on educating, rather than punishing, as a way to strike a balance outdoors.

To read the original article, hear an audio report of this story and see related stories, follow this link to the MPR News website.  https://www.mprnews.org/story/2020/03/09/dnr-conservation-officers-education-as-enforcement