The St. Louis River can be seen from the Arrowhead Public Boat Ramp in Superior, Wisc. on Tuesday, March 3, 2020.  Photo: Danielle Kaeding/WPR

Federal, state, local and tribal partners are roughly halfway to their goal of cleaning up one of the largest polluted hotspots on the Great Lakes. Officials reflected on progress over the last decade to address contamination of the St. Louis River as part of the 10th annual St. Louis River Summit this week.

The St. Louis River is one of 43 sites listed under the Great Lakes Water Quality Agreement as an area of concern (AOC), which are considered the most contaminated areas on the lakes. The river is the second largest Great Lakes AOC in the United States. The site includes the lower 39 miles of the river, the surrounding watershed and about 10 miles from the river's mouth into Lake Superior.

Multiple agencies and organizations have worked across state lines for decades to lay the groundwork for cleaning up the river. In 2013, they updated their plan for de-listing the site and removing nine impairments to the river, including beach closings and loss of fish and wildlife habitat.

Since then, those involved with the cleanup effort have accomplished 46 percent of about 80 management actions identified in the plan, said Barb Huberty, the river's AOC coordinator for the Minnesota Pollution Control Agency. She noted the Great Lakes Restoration Initiative(GLRI) that began in 2010 provided a significant source of funding to support their work. Congress has appropriated $3.48 billion for GLRI funding over the last decade.

"We wouldn't be here if we didn't have that federal funding," said Huberty.

She said Wisconsin and Minnesota have been lucky to find creative ways to leverage the local cost-share dollars needed to access federal funding. The cleanup of the U.S. Steel Superfund Site in Duluth and Hog Island Inlet in Superior are among major projects that have been addressed. Others include restoring dune habitat on Wisconsin Point and ongoing efforts to restore 275 acres of wild rice by the Fond du Lac Band of Lake Superior Chippewa and multiple agencies.

Partners have also been able to remove two impairments to the river, including degraded aesthetics and fish tumors or other deformities. 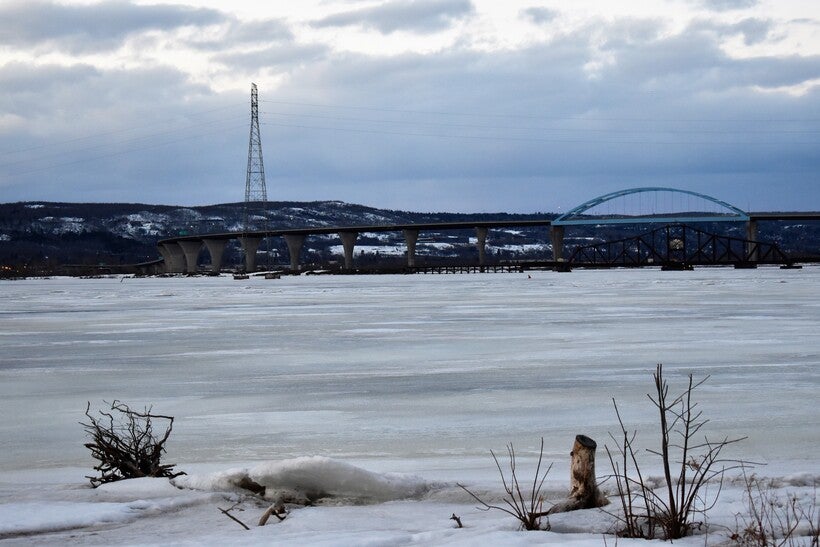 A view of the Bong Bridge spanning the St. Louis River from Billings Park in Superior, Wisc. on Tuesday, March 3, 2020.Danielle Kaeding/WPR

Next month, they plan to submit a recommendation to remove another impairment for excessive sediment and nutrient loading on the river to the U.S. Environmental Protection Agency, said Matt Steiger, the river's AOC coordinator for the Wisconsin Department of Natural Resources. Next year, they also hope to begin removal of degraded fish and wildlife populations.

"We've taken things on paper and done them," he said. "It's really important to not only get out there with the shovel-ready projects, moving dirt and planting plants, creating habitats, removing contaminants. We've been doing all that work, but we’re also monitoring the progress — monitoring the recovery."

Steiger said that means collecting and assessing data over time to determine when they've reached milestones that would prompt them to remove impairments that were identified due to legacy contamination from historic land use, cities and industrial development.

"What we know is that even by the '20s, we had a permanent dead zone in the St. Louis River," said Joel Hoffman, an EPA research biologist.

Hoffman said the Minnesota Board of Health reported at the time that shipyards were covered with a thick layer of mud with globules of tarry substances and no living organisms were found within samples. The conditions persisted for decades where portions of the river were "biologically dead" for parts of the year, said Hoffman.

Improvements in wastewater treatment and environmental regulation jump started the recovery. Steiger said their work is the last push to meet a goal of de-listing the site by 2025.

"It is an ambitious and aggressive goal, but we’ve got our actions laid out," said Steiger. "We're halfway done with that list in seven years. And, we're really pushing to the end, especially on these contaminated sediments sites."

Huberty said cleaning up the St. Louis River area of concern is critical to restoring balance within the ecosystem along the river.

"Because if we don’t have clean water, we can’t have the bugs that live in the bottom sediments that need to be there for the fish to eat that we like to harvest to put on our plates," she said.

The overall cost of cleaning up the St. Louis River is estimated to range from $300 to $400 million. More than $420 million is estimated to already have been spent on remediation and restoration of the site from 1978 to 2013.

To read the original article and listen to an audio report of tis story, follow this link to the WPR News website.  https://www.wpr.org/halfway-home-partners-mark-decade-progress-clean-st-louis-river