Traci Lynn Martin says kayaking among floating pieces of ice in Lake Erie was fun and serene. She's spending the next nine months trying to circumnavigate all the Great Lakes. Photo: Submitted by Traci Lynn Martin/Facebook

For the next nine months, Traci Lynn Martin is going to be "homeless by choice." She'll be calling a 16-foot kayak home until December as she attempts to become the first person to circumnavigate all five Great Lakes.

It's never been done before and Martin, a 52-year-old nurse from Missouri, brings an additional challenge to the test of endurance. She lives with chronic rheumatoid arthritis that feels like "a 100 ice picks jabbing every single joint in your body."

But as she glides on the water with her paddle in hand, serenity washes over her agony.

"You have to be able to believe in yourself and decide that you can still do the things in life you love," she says.

"That's my message to people." 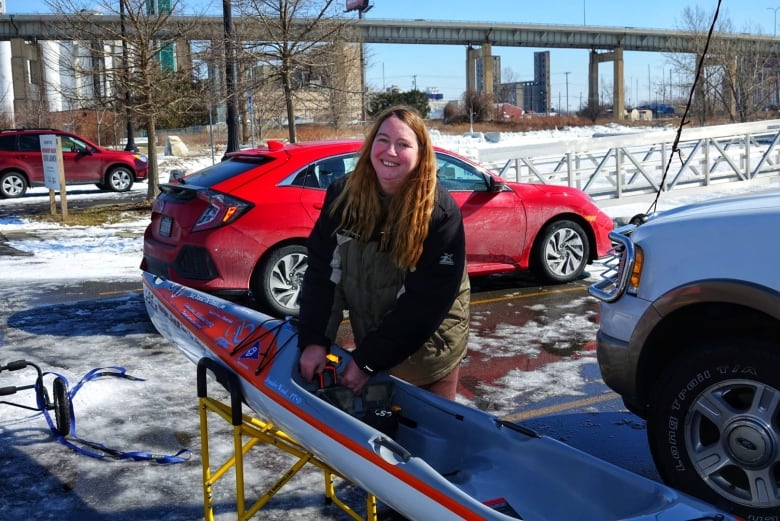 Traci Lynn Martin, a 52-year-old nurse from Missouri, is trying to circumnavigate all the great lakes — something no person has ever done before. Photo: Submitted by Traci Lynn Martin

Martin started the expedition on Sunday along Lake Erie near Buffalo, as snow covered shorelines and chunks of ice floated around her. Eight paddlers from Detroit and one from Canada joined her.

To make the trip possible, she sold her home and plans on spending roughly $20,000.

The costs include two live trackers with her whereabouts, her tent and custom solar panels to power her cell phone and other equipment. Friends are also accompanying her throughout the trip.

She plans to kayak about 50 kilometres a day.

Attempt in 2017 ended with three cases of pneumonia

This isn't her first attempt at a record-breaking voyage. Martin tried the same trek in March, 2017. She became the first to circumnavigate North America's three largest lakes — lakes Michigan, Superior, and Huron — in one calendar year.

However, she missed out on a Guinness World Record for the longest distance paddled in a kayak in one calendar year by about 400 kilometres after paddling roughly 5,800 kilometres.

She also spent $60,000 of her retirement savings and got pneumonia three times. After coughing up blood and being stopped by frozen waters, Martin stopped in December, 2017 near Toronto.

All the risks worried her family.

"My daughter didn't react well at all, she's very afraid something is going to happen to me," Martin says.

"If you want adventure without any risk, you need to go to Disney World." 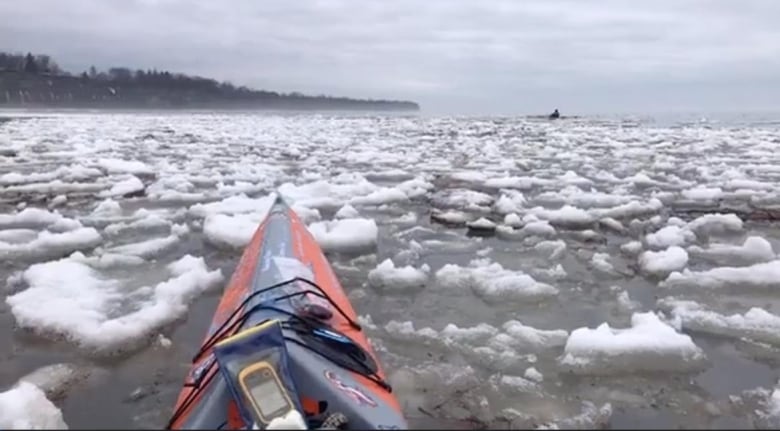 This time, like last time, she'll face unpredictable waters, risks of hypothermia and the possibility of bears intruding on her nightly campsites.

She's not going for the official record this year to avoid the paperwork, but she still thinks she can complete the journey in nine months and hopes this time, the focus will be on people overcoming chronic pain.

"In 2017, I had something to prove to myself and to everyone telling me I couldn't do it, but no one is saying that anymore," she says.

"This will be my last attempt. If I don't succeed this year I can go home and know I did my best and paddled for the people I tried to inspire."

The lone, sometimes, lonely kayaker has the names of others living with chronic pain printed on her kayak. She is also inviting anyone interested to join her on the water, even offering to go as fast or as slow as visitors want.

As of Tuesday afternoon, Martin stopped at Sturgeon Point, NY.

After the trip is over, she plans to move near Lake Michigan or Lake Superior.