Here is a visual showing a breakdown of the democratic primary vote in Cook County.  Bernie Sanders wins in Cook County with 24% of the vote. Biden hadn’t been seriously contesting Minnesota, which was expected to be a battle between Sanders, who won the state’s party caucuses in 2016, and Klobuchar. But Klobuchar dropped out of the race on Monday, endorsing Biden.

That last-minute change scrambled the race, with Klobuchar’s supporters having to find a new candidate at the last minute. Biden, who had been in a distant fourth place in a MPR News/Star Tribune poll two weeks before the election, was trying to attract Klobuchar supporters on the basis of the Minnesota senator’s endorsement, while Sanders was hoping to capitalize on the withdrawal of his biggest rival here.

“Words can't explain how excited I am,” said Corey Day, Biden’s state director, after the AP called the race for Biden. “Without [Klobuchar's] support, we could never have gotten to this place.”

Biden’s last-minute surge overcame Sanders’ many passionate supporters, such as Steven McKnight of Brainerd, who said Sanders’ positions on health care, public education and infrastructure all appeal to him. It’s about “taking care of folks in our country in a way that we haven't before,” McKnight said.

"So to all of Amy and Pete's millions of supporters, the door is open, come on in!" Sanders said to cheers from the roughly 6,000 attendees. 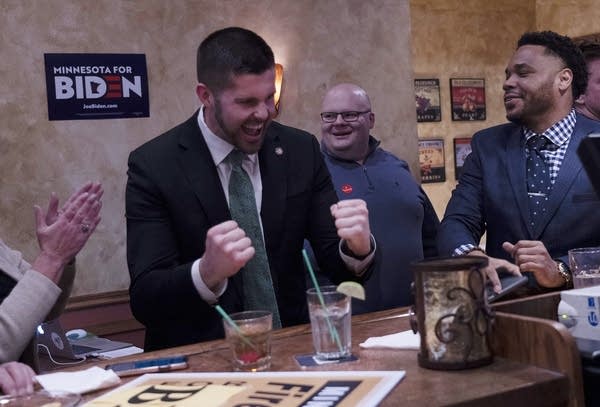 DFL Representative Dan Wolgamott of St. Cloud, Minn., cheers when he learns that Minnesota has been called for Democratic presidential candidate Joe Biden, during a watch party for the former vice president on Tuesday. Photo: Judy Griesedieck for MPR News

But it was Biden who seemed to attract the majority of late-deciding voters Tuesday, boosted by endorsements from Klobuchar and Buttigieg and a dominating victory in Saturday’s South Carolina primary.

Biden, who has been running for president as a moderate, ran even with Sanders among the more liberal electorates in Hennepin and Ramsey counties, but won by double digits in suburban counties and Greater Minnesota.

Steve and Kathy Fuller, who live near Bemidji, said they voted for Biden. They said they would have voted for Klobuchar if she had not dropped out of the race.

"I voted for Joe Biden because I want anybody who can beat Trump," said Steve Fuller. "He has to get out of there, so we can get anywhere."

Exit polling from CNN showed Biden winning 55 percent of voters who decided on a candidate in the last few days, versus 21 percent for Sanders. 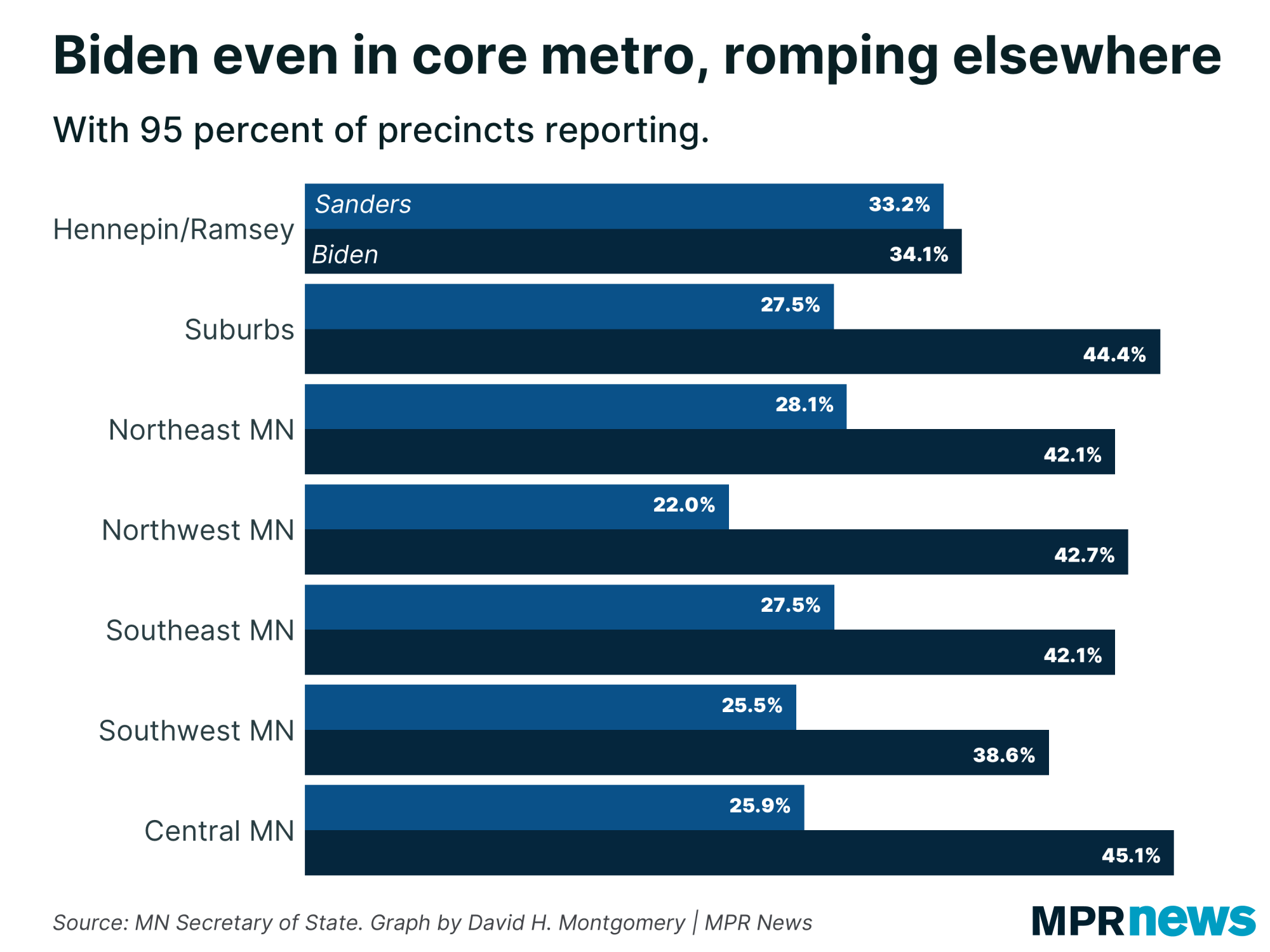 More than 100,000 Minnesotans had voted early in Tuesday’s primary election, and Klobuchar’s withdrawal came too late for her supporters to change their votes. State law allows that only up to a week before the election.

Rural residents like Barbara Droher Kline, who lives near Le Sueur, said that’s a problem as some candidates dropped out right before the primary. She said some townships have opted to skip election day polling in favor of mail ballots.

“I know a lot of people who voted for Amy, because we’re in Minnesota and they have no options to change their ballot, and they didn’t have an option to wait for election day, because we’re mail in now,” said Kline.

Klobuchar was receiving around 5 percent as votes continued to be counted Tuesday night.

There were 15 names in all on the Minnesota ballot, but two-thirds of the candidates dropped out before Minnesota’s chance to weigh in. For Republicans, President Trump had a virtual free pass as the only named candidate on the ballot opposite a write-in line.

Sanders and Biden weren’t the only candidates with passionate Minnesota supporters.

St. Paul attorney Alina Stevenson said she was glad to be able to vote for a woman, Massachusetts Sen. Elizabeth Warren.

“I made my choice based on that a little bit,” Stevenson said. “But also because Elizabeth Warren has really good policies, she's really thought out and I think she's the most qualified. Bernie is great and I really respect him a lot. But I also wanted to feel good about voting for someone who wasn't an 80-year-old white man.”

With Klobuchar and Buttigieg dropping out of the race in the final days before Tuesday, Warren — at age 70 — is the youngest major candidate in the race, along with long-shot Hawaii Rep. Tulsi Gabbard, who didn’t have a major campaign effort in Minnesota.

Tuesday’s election was the first time since 1992 that Minnesota held a presidential primary, rather than a party-run caucus. The switch was intended to make it easier for Minnesotans to participate, and seemed to work. With less than a quarter of precincts reporting Tuesday evening, Minnesota already had more than 310,000 votes in the Democratic primary — far more than the 207,109 participants in the 2016 DFL caucuses that Sanders won.

The switch to a primary drew generally positive reviews from Minnesota voters Tuesday.

Alvin Styles, who cast his Super Tuesday ballot at Plymouth City Hall west of Minneapolis, also liked the primary election because it was more accessible.

"I think I would rather do the voting as opposed to the caucus because it lends itself to more people being involved than the caucus system does," Styles said.

Democrats had the only contested race on the ballot Tuesday, but thousands of Republicans showed up to the polls to vote in favor of renominating President Trump.

Trump was the only name listed on the GOP primary ballot, along with a write-in spot.

Marvin Niesen of Brainerd voted for the president Tuesday. Niesen was excited about Trump’s job performance, and opposed to the direction that Democratic candidates want to take the country.

“Our economy is up, people are back to work,” said Niesen, who noted help wanted signs around town. “That’s Trump’s fault for making jobs more available.”

To read the oringal article and related election reporting, follow this link to the MPR News  https://www.mprnews.org/story/2020/03/03/minnesota-super-tuesday-presidential-primarywebsite