Thousands of people take part in the Missing and Murdered Indigenous Peoples March in Minneapolis on Feb. 14. The annual event was held in honor of in honor of Indigenous people who are missing or have been killed.  Photo: Christine T. Nguyen | MPR News file

Members of the state’s Missing and Murdered Indigenous Women’s Task Force know it’s a big deal to ask women to share difficult and tragic stories with a room full of strangers.

One of the task force’s co-chairs, Nicole Matthews, said the stories are critical to the group’s quest to better inform lawmakers and pass legislation next year that could save lives.

“One of the key points of data is getting stories from our relatives,” said Matthews, who is Anishinabe from the White Earth Band of Ojibwe.

Taking anecdotal stories and tracking them is part of a new approach that lawmakers approved last year. The task force is made up of representatives from various tribes in Minnesota, community members, legislators and law enforcement. 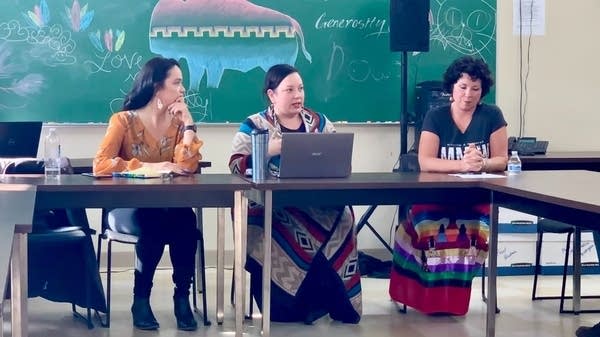 Government data shows Native American women in Minnesota and across the United States are the victims of violence and homicide at much higher rates than the rest of the population.

According to the Minnesota Department of Health, Native American women make up less than 1 percent of the state’s population, but homicide rates for Native women were seven times higher than for white women between 1990 and 2016. The National Crime Information Center reported there were more than 5,700 missing or murdered American Indian or Alaskan Native women in 2016.

At a recent listening session, task force members facilitated a roundtable discussion inside the Minnesota Indian Women’s Resource Center in Minneapolis. It was the first of a few of three listening sessions.

A few women began to open up over the course of the two-hour session.

North Minneapolis resident Leah Skjefte, a member of the Red Lake Nation, said she wanted to support other women.

“I came here to provide input I thought was important,” Skjefte said.

Another woman described how she lost a pregnancy to violence at the hands of the baby’s father. The discussions were heavy and tearful.

“I’m not sure where to start,” Skjefte said. “Except, to start putting value into Native Indigenous women, to value the work they do and their lives.”

Rep. Mary Kunesh-Podein authored the bill to form the task force last year. The New Brighton Democrat said a good place to start is by collecting more data around sex trafficking, rather than relying on anecdotal information.

“We know that any kind of businesses like oil, pipelines or sporting events, hunting or fishing openers, there’s a spike in this kind of activity,” she said. “But nobody has taken the time to be able to collect that data. … You can’t prove on paper or in a spreadsheet or on a graph these things are actually happening in this area if you aren’t able to track the activity.”

Kunesh-Podein said one of the reasons sex trafficking is hard to track is because of jurisdictional complications.

“Whether it’s with the reservation police, county police or federal government,” she said. “Where is it that things are falling apart?”

The task force will send recommendations to the state Legislature in December. People who cannot attend the listening sessions may submit their stories online. The next listening session is Saturday at the American Indian Community Housing Organization in Duluth.

To read the original article and hear an audio version of this report, follow this link to the MPR News website.  https://www.mprnews.org/story/2020/02/28/minn-task-force-on-violence-against-native-american-women-s...