More than 36,000 Minnesotans have already voted in presidential primary People line up to vote early inside of the Hennepin County Government Center in Minneapolis on Jan. 17, the first day of early voting in Minnesota's primaries this year.   Photo:  Evan Frost | MPR News

Close to 40,000 Minnesotans have already voted in Minnesota’s 2020 presidential primary, a week and a half before Super Tuesday.

More than 85 percent of the absentee votes were cast in the Democratic primary — unsurprising, since the Democratic nomination for president is hotly contested while President Trump is the only name on the Republican presidential primary ballot.

As of Friday, Secretary of State Steve Simon’s office reported 30,932 submitted ballots in the DFL primary and 5,787 in the Republican primary. Another 29,000 Democrats and 4,000 Republicans have requested absentee ballots but not yet submitted them.

Voters can request an absentee ballot for any reason by visiting mnvotes.org, which also contains more information about how to vote in the 2020 primary.

Early voting began in the Minnesota primary on Jan. 17, making the earliest Minnesota voters the first 2020 primary voters in the nation. Other states with primaries before Minnesota commenced early voting later. 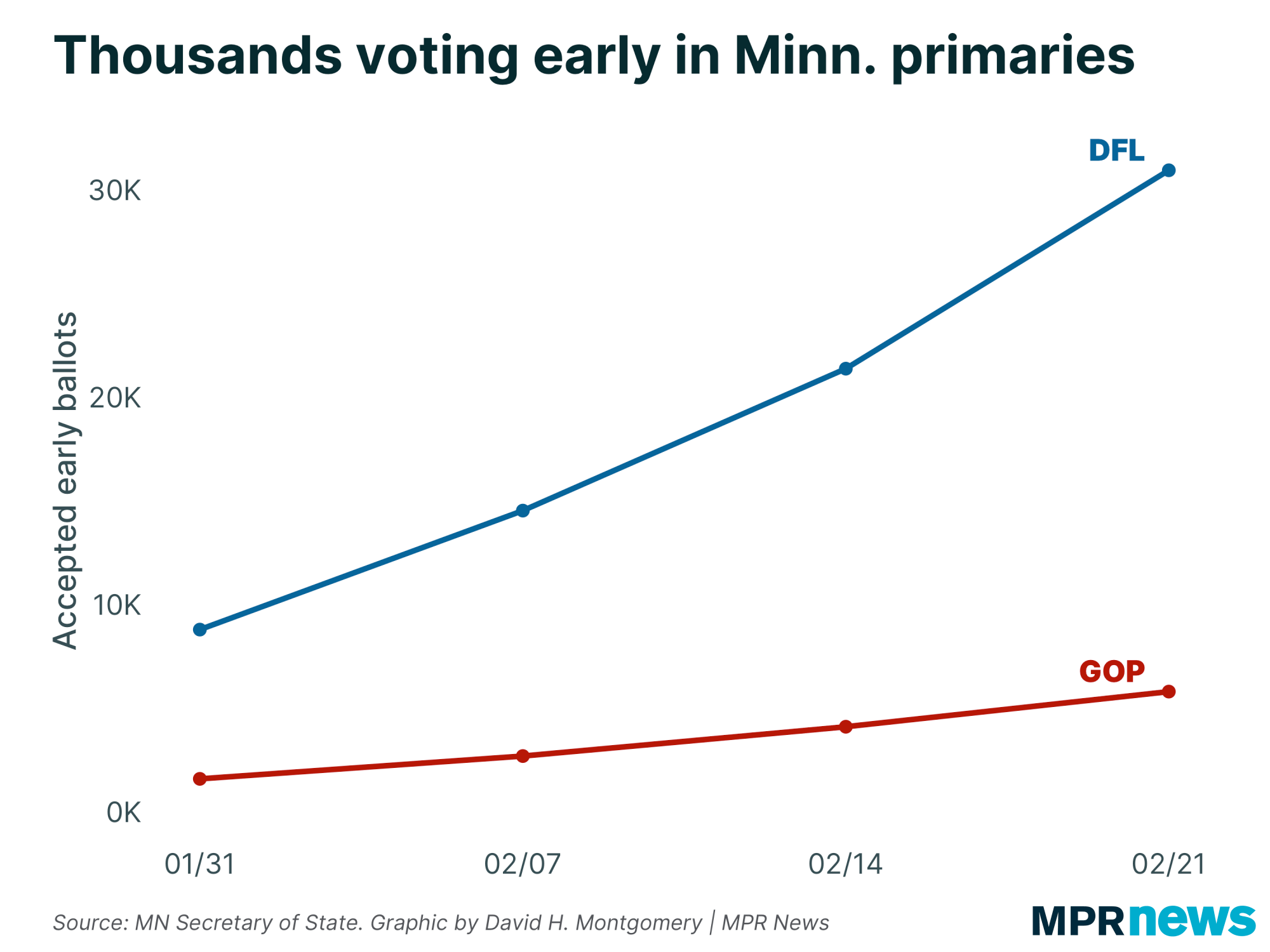 What remains unclear is how many voters will ultimately cast ballots through March 3. This is the first time in decades that Minnesota has had a presidential primary, rather than a party-run caucus.

The nearly 40,000 votes so far in Minnesota’s primaries are still far short of the total votes cast in recent elections. The 2016 presidential caucuses had 207,000 DFL participants and 114,000 Republican participants. The 2018 gubernatorial primaries saw 584,000 DFL voters and 321,000 Republicans.

In the 2018 primary, around 15 percent of all votes were absentee, with the rest cast on Election Day. 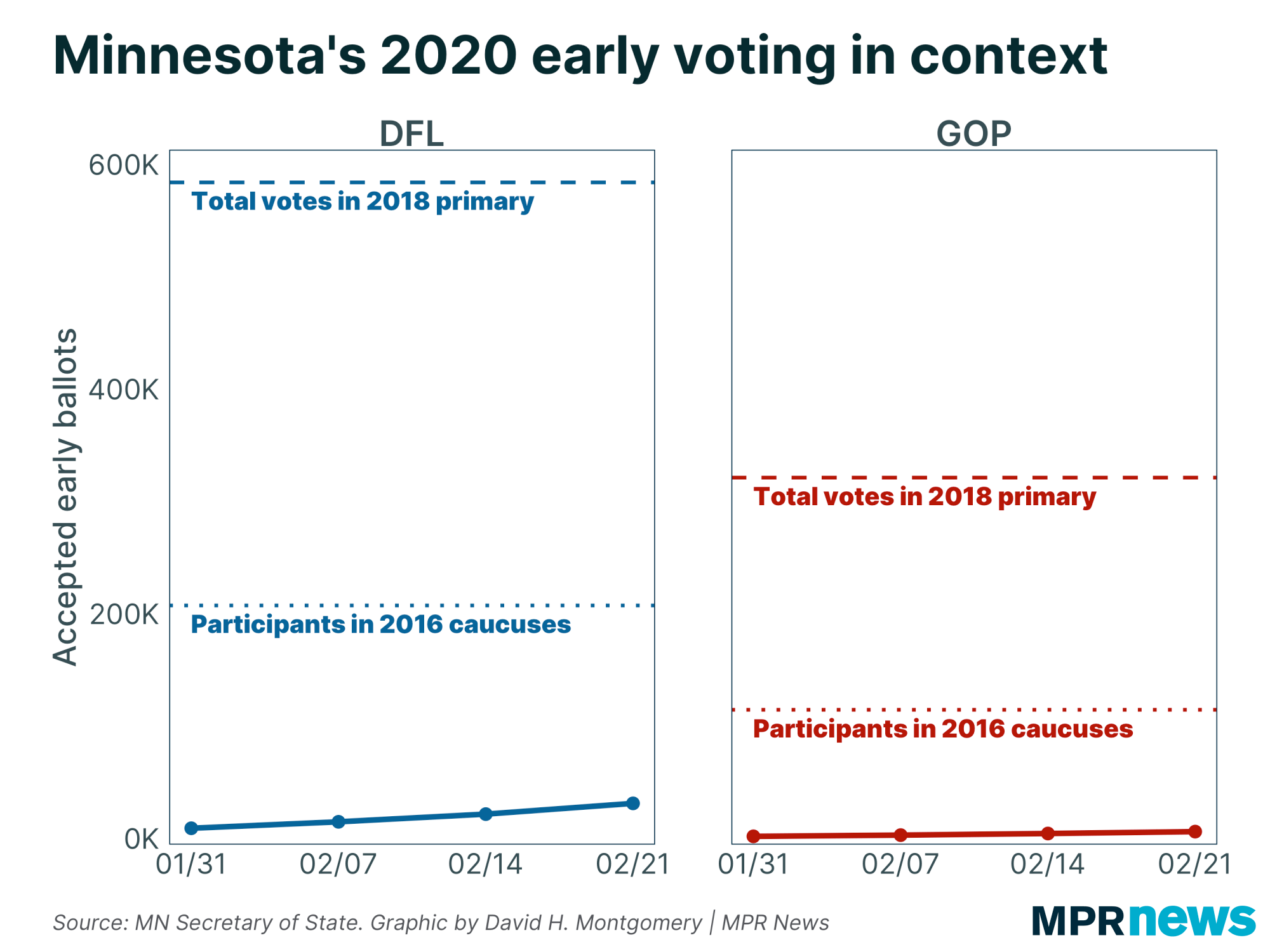 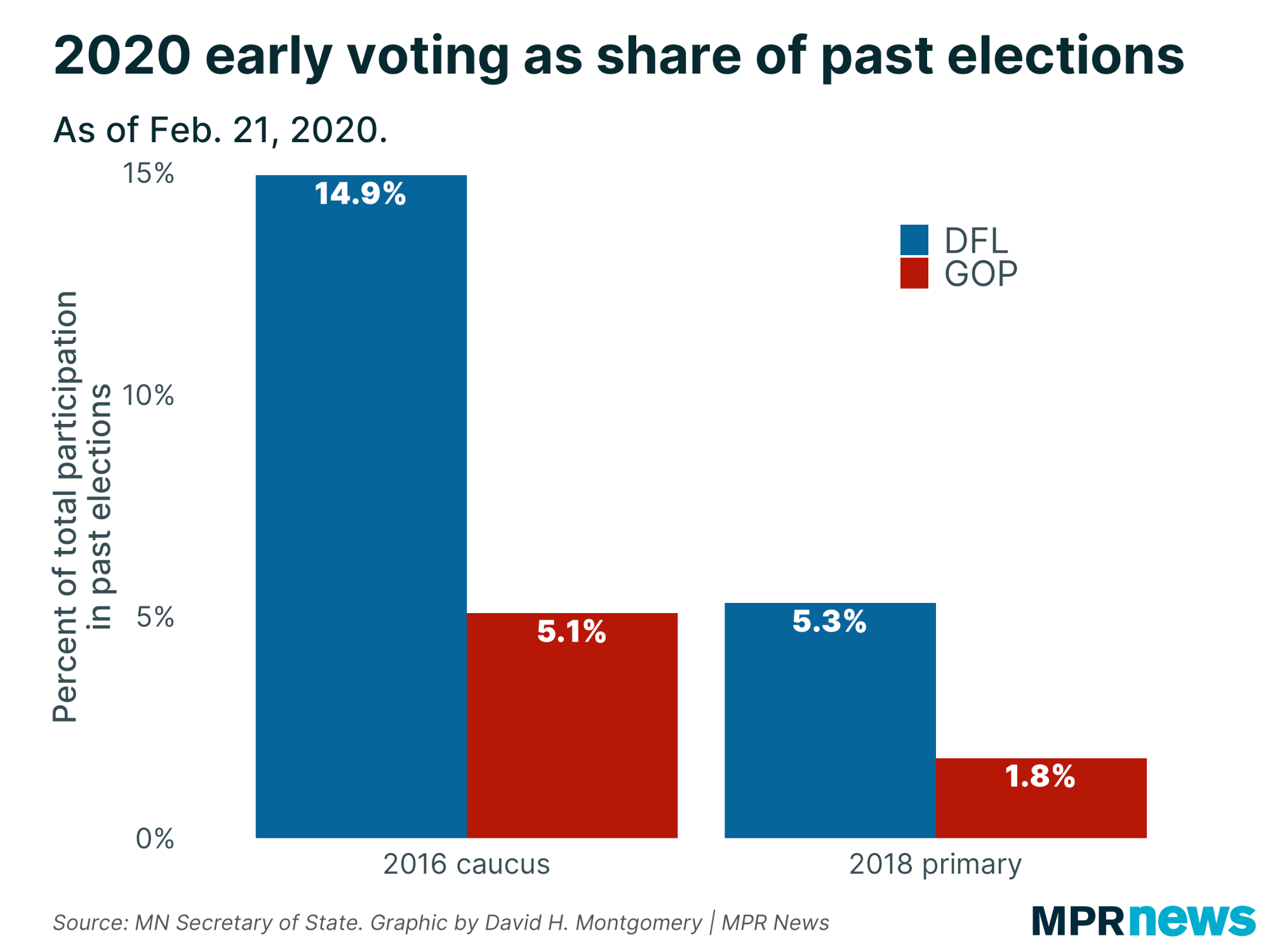 One argument for switching Minnesota from a caucus system to a primary was that primaries are easier for voters to participate in than a caucus, which took place on specific days and times.

Minnesotans have more than a week remaining to vote early, and can also vote in person at their polling places on March 3.

The 2020 Democratic presidential primary ballot in Minnesota features 15 candidates and an option for “uncommitted.”

Because voting began more than a month ago, many of the Democratic candidates on the ballot have already dropped out of the race, such as New Jersey Sen. Cory Booker and tech entrepreneur Andrew Yang. Minnesotans who have already voted early but have changed their mind can cancel their ballot at their local election office through the close of business on Tuesday, Feb. 25.

To read the original story and see more election related stories, follow this link to the MPR News website.  https://www.mprnews.org/story/2020/02/21/2020-primary-early-voting-in-minnesota