Weather items on the ‘Early Spring’ checklist; what do they say? There are three weather conditions I would put at the top of a checklist that points or doesn’t point toward an early spring. Let’s take a look at those three indicators, and which way they are pointing.

How much winter we have to burn off is the premise behind two of these weather factors affecting an early spring. The amount of ice on the Great Lakes and the amount of snow on the ground are two factors standing between us and early springs.

This year we don’t have much Great Lakes ice to get rid of before Great Lakes waters start to warm. The graphs below show how the ice cover now compares to the long-term average. 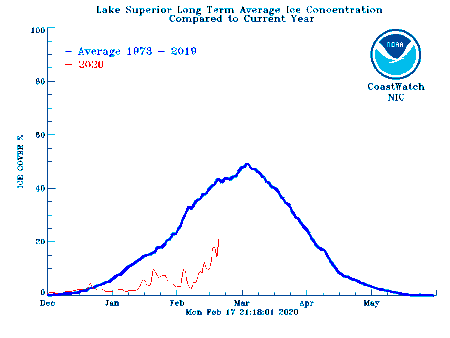 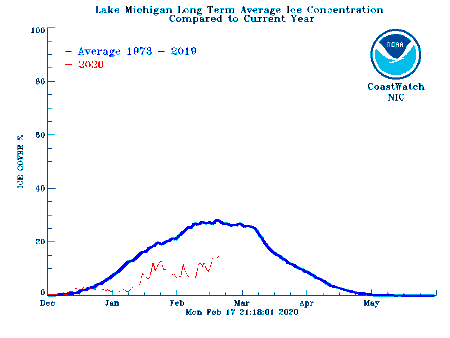 Lake Michigan has half the normal ice cover. Lake Huron has less than half the normal snowfall.

Lake Huron is a key lake for delivering cold air. The raw northeast winds that blow over Lake Huron in March and April can put the big chill on Lower Michigan.

Snow on the ground across the U.S. is also a big factor in the fight for an early spring. Deep, compacted snow chews up a lot of heat over the Plains. Without much snow, the heat makes it to the Great Lakes and starts to warm up Lake Michigan.

How does this year’s snow cover stack up? At first look, the amount of snow is about normal for this time of year.

Current snow cover on February 17 is shaded in white.

Above is the current snow cover. 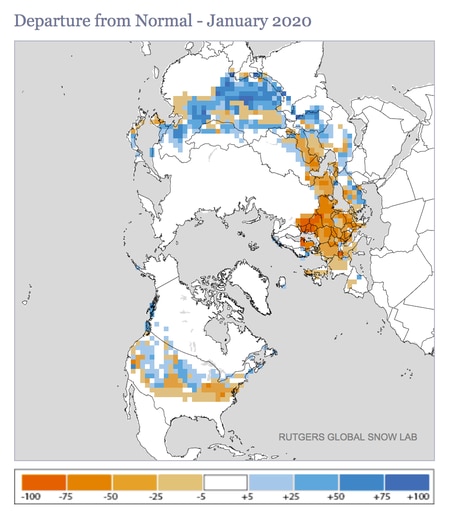 The brown areas south of Michigan are areas with less snow cover than average. Put another checkmark in the early spring category.

I’ll admit the snow cover could change dramatically with one big storm. But we will have a tough time building a solid shield of thick, compacted snow going into March.

Now we all know Great Lakes weather can change on a dime. We could have a warm winter and then flip-flop to colder than normal temperatures. Is there any sign of that happening?

Upper-air flow for the next 10 days. Red shows flow that is warmer than average. (weathermodels.com)

The animation above is the forecasted upper-air flow for the next 10 days, through February 28, 2020. While we will have a couple of one to two day cooldowns, you don’t see anything that looks like a full-scale weather pattern change.

Put our final checkmark in the early spring column.

Right now everything is pointing toward an early spring. But just what is an “early spring?” I wrote about early springs here.

To read the original article and related weather reporting, follow this link to the mlive.com website. https://www.mlive.com/weather/2020/02/3-weather-items-on-the-early-spring-checklist-what-do-they-say...