The playground at Harriet Island Regional Park is inundated by Mississippi River floodwaters in March 2019 in St. Paul. Gov. Tim Walz said on Tuesday that his supplemental budget proposal next month will include a $30 million request for the Disaster Assistance Contingency Account.
Photo: Andrew Krueger | MPR News 2019

Walz said his supplemental budget proposal next month will include a $30 million request for the Disaster Assistance Contingency Account. He said he wants money added soon to make sure the state is prepared. 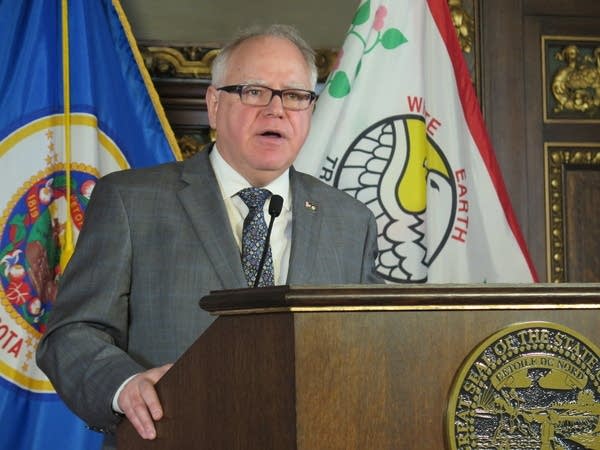 “It would be irresponsible not to assume that we’re going to have a pretty wet spring and the potential for flooding, as it was last year,” Walz said.

Lawmakers acted last session to address a similar shortfall in the account, which was enacted in 2014 to speed up the state's response to natural disasters and eliminate the need for special legislative sessions.

“Looking forward, it’s obvious that if the state is going to continue to help communities after disasters, more money needs to be appropriated into that account,” Kelly said.

“You can’t wait weeks or days when we have a disaster,” Pelowski said. “We have to get the aid to that area and to those people as quickly as possible.”

Many local communities have benefited from the state account. For example, Norman County in northwestern Minnesota, has experienced three disaster declarations in the past five years.

“Having a healthy balance in the Disaster Assistance Contingency Account is critical as we rebuild our small communities and counties public infrastructure after a disaster,” said Garry Johanson, the county’s emergency management director.

A House hearing is scheduled next week on the proposed allocation. Pelowski said his goal is to get the measure passed and on the governor’s desk by April 1.

The latest flood outlook from the National Weather Service says there’s a significantly increased chance of flooding in the Upper Mississippi River and Red River watersheds this spring.

Sen. Julie Rosen, R-Vernon Center, the chair of the Senate Finance Committee, said she supports the governor’s proposal. Rosen said she, too, is making the disaster aid money a top priority for the session.

“Given the challenges we are expected to face this spring, it’s important we are prepared to give counties and communities the support they will need,” Rosen said.

To read the original story and hear an audio report, follow this link to the MPR News website. https://www.mprnews.org/story/2020/02/18/walz-proposes-adding-30-million-to-depleted-state-natural-d...