GroShed technical engineer Jake Stern shows off one of the company's sheds at the Home and Remodeling Show in Minneapolis Jan. 31. Stern said plants grow fast under special LED lights, which also keep the inside of the structure warm.  Photo: Martin Moylan | MPR News

A short growing season. Sudden, killing frosts. Minnesota is tough territory for gardeners, but an Emily, Minn.-based company is enabling folks to grow their own organic veggies — in bulk — through our long, cold, dark winters.

"We can get up to 500 planting locations in a 96-square-foot farm, which would be producing approximately 140 heads of lettuce a week,” said Jon Friesner, founder of GroShed.

At the recent Home and Remodeling Show at U.S. Bank Stadium in Minneapolis, Friesner showed off the sheds, which he calls farms. They're actually well-insulated, windowless prefabricated sheds that use hydroponics and LED grow lights to raise vegetables.

But you don't have to settle for just lettuce.

“We've grown over 70 varieties of plants, everything from eggplants to peas, beans, zucchinis, dozens of different varieties of lettuce, tomatoes, cherry tomatoes,” he said. “There isn't a whole lot you can't grow.”

Even when it's 30 below zero; the days are short; the sun is weak, he said. An 8-by-12-foot shed uses about $2 of electricity per day, and grow lights provide enough heat to keep the shed warm, he said.

Friesner envisions multiple markets for the sheds: Homeowners who want to grow tastier produce for themselves and friends, community groups looking to upgrade the quantity and quality of winter-time produce, and entrepreneurs who want to supply fresh, locally grown, organic produce to grocers and restaurants on a small scale. The sheds meet all of those demands while reducing the environmental impact of growing and transporting food, he said.

"Our current global food system is moving stuff all over the place at great costs,” Friesner said. 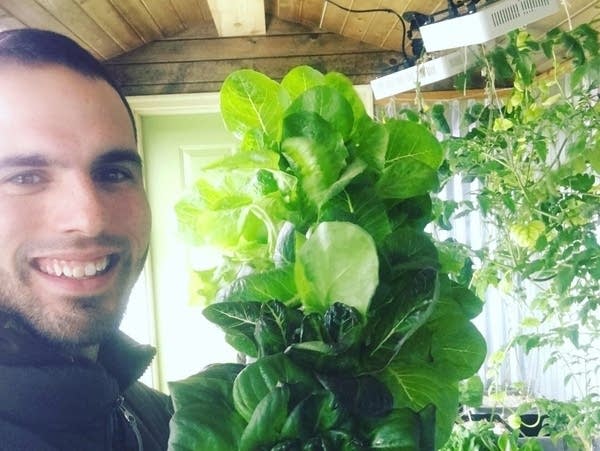 Jon Friesner is the founder of GroShed. Photo Courtesy of Groshed


At the Minneapolis home show, people touring the GroShed remarked more about the freshness, flavor and healthiness of the food they could raise than whether it would save them money.

“It's definitely something to look into,'' said veteran gardener Brad Akkerman of Princeton.

Akkerman uses greenhouses, but not in the winter — they're hard to heat and he’s had them collapse under the weight of snow. He said he'd like to grow his own veggies year-round.

“If you can maintain herbs or vegetables in the wintertime that's great,” he said. “Everything is so much better (that) you grow at home than what you find in the store.” 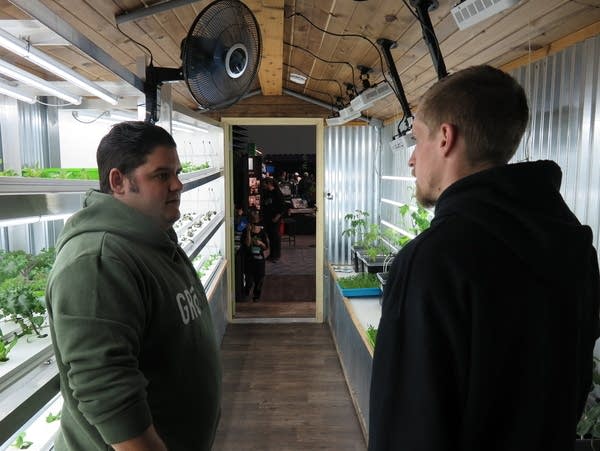 "Minneapolis definitely has a shortage of fresh produce in communities like north Minneapolis that I feel could really benefit from something like this, especially if it's affordable and sustainable," he said.

Ron Kidder, who lives in Ideal Corners, north of Brainerd, bought a GroShed in December. He had long tried to grow veggies in a dome-type greenhouse in winter. He said the plants didn't get strong enough sunlight, but his new structure works great.

"I just plug it into an outlet from my porch, use a hose to get water to the reserve tank every couple of weeks or so. Otherwise, it takes care of itself because it's so automated. The lights are on timers,” he said. 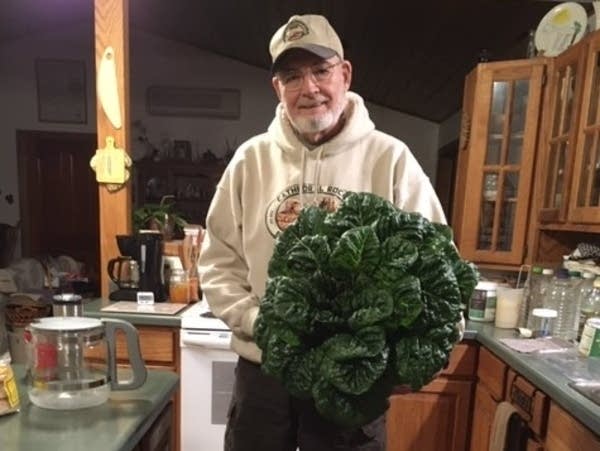 GroShed owner Ron Kidder says he has been harvesting some really big heads of lettuce.
Photo courtesy of Ron Kidder

So far, Kidder has focused on growing lettuce. One head he let grow and grow hit about 2 feet. He's harvested about 40 heads, sharing what he and his wife can't eat with neighbors and friends.

Kidder said his GroShed also provides mentally refreshing doses of green during the eternal gray of winter. It's just 10 feet from his back door to his GroShed

"You just walk in there. It's toasty warm and everything is growing," he said.

And the University of Minnesota has developed what it calls deep winter greenhouses. They are passive-solar greenhouses that rely primarily on the sun for heat, using supplemental heat only when necessary.

The greenhouses have a south-facing, glazed wall angled to get the most solar energy possible on the coldest day of the year. Heated air is blown underground and stored in rocks that provide heat at night. 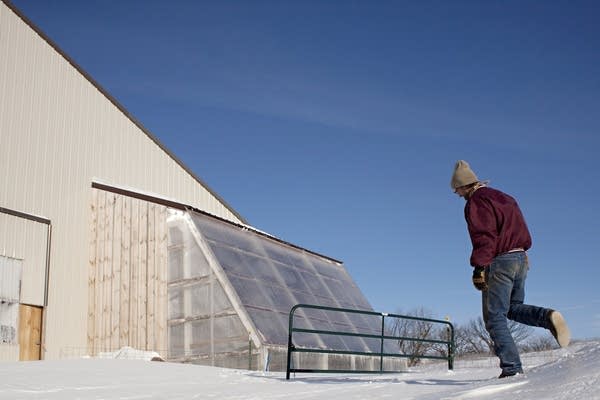 A deep-winter greenhouse at Paradox Farm in southern Otter Tail County is built with exterior walls made from wood and polycarbonate. The farm sits on 160 acres and is owned by Tom Prieve, pictured, and Sue Wika.  Photo: Ann Arbor Miller for MPR News 2014

"There are some people that are like, 'Oh we're just growing for ourselves.’ Then there's the other people who are actually trying to sell (produce),” said Daniel Handeen, a research fellow at the University of Minnesota's Center for Sustainable Building Research.

The model is well-suited for lettuces, herbs, sprouts and other greens that don't need a lot of sun to grow. There are 25 of these Minnesota-hardy green houses in operation across the state.

Handeen said the greenhouse owners who sell produce focus on serving small groups of customers who sign up to receive produce through the winter. They’re not looking to serve grocery stores. Companies like Bushel Boy in Owatonna and Revol Greens in Medford are focused on that business, with big commercial greenhouses producing tomatoes and lettuce throughout winter.

Anyone who wants to build a smaller winter-hardy greenhouse can download plans from the University of Minnesota Extension website. Handeen said it’s possible to build a 100-square-foot structure for about $5,000. 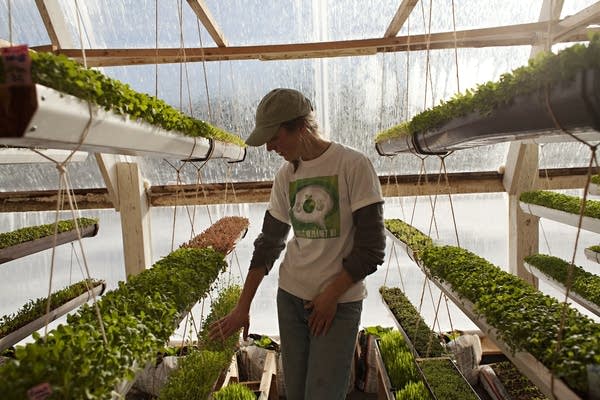 Sue Wika enjoys her time working in the deep-winter greenhouse at Paradox Farm, especially on really cold days. Produce grown in the greenhouse is sufficient for the farm's owners, their animals and 10 or so other families.  Photo: Ann Arbor Miller for MPR News 2014

Financially, investing in a GroShed or other greenhouse to grow food in winter may or may not pay off, said Ryan Pesch, an educator with the University of Minnesota Extension.

"It's economical for some and for others it's not economical," he said. "But the primary motivating factor for people to do this at all oftentimes relates to just how can we better feed ourselves and other people throughout the winter."

He said most people with one of the university’s deep winter greenhouses are growing veggies as a winter side business.

"Nobody is getting rich off winter greenhouse production, just yet. These are very modest-scale enterprises and modestly-sized greenhouses," Pesch said.

The city of Minneapolis is working with the university and a couple of Minneapolis nonprofits — Appetite for Change and Tamales y Bicicletas — to deploy two 1,200-square-foot deep winter greenhouses in the city soon.

“This project could help people in food-insecure neighborhoods to grow food at both a better price and better climate impact,” said Tamara Downs Schwei, the local food policy coordinator for the city.

And GroShed will soon have a presence in Minneapolis, too, at the Minnesota Indian Women’s Resource Center.

To read the original article and see related stories, follow this link to the MPR News website.  https://www.mprnews.org/story/2020/02/13/winter-veggie-gardens-bloom-in-minnesota-as-home-greenhouse...