A new study shows that blueberries may be a more valuable food source for wolves in the boreal forests of far northern Minnesota than previously appreciated.  Photo: Courtesy of the University of Minnesota

New research into the surprising summer eating habits of northern Minnesota wolves known to be fond of beaver, fish and blueberries has now also documented wolves feeding those berries to their pups.

The finding, published this week in the journal Wildlife Society Bulletin, suggests that wild blueberries may be a more valuable food source for wolves in the boreal forests of far northern Minnesota than previously appreciated.

In the summer of 2017, Austin Homkes, a field biologist with the Voyageurs Wolf Project — a collaboration between Voyageurs National Park and the University of Minnesota — trekked to a beaver meadow just south of the park where researchers believed wolves had recently killed prey.

As he drew near, he saw five pups gathered around an adult wolf in the center of the meadow, about 100 meters away. He saw the pups lick at the adult’s mouth for about 30 seconds, and then watched as the wolf regurgitated food for the pups three times on to the ground.

A half hour after the wolves left, he approached and found several small piles of chewed and whole wild blueberries. While wolves are known to regurgitate deer and other meat to feed their young, this is the first documentation of a wolf feeding pups berries or fruit of any kind. 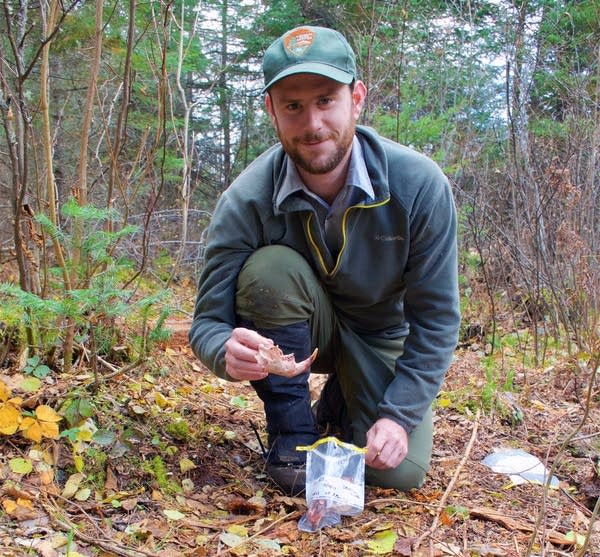 Tom Gable collects the skull/jaw of a beaver that was killed by a wolf. Photo: Courtesy of Tom Gable

The finding is significant because “that means that wolves are getting some energetic value out of consuming blueberries like this,” explained Tom Gable, a Ph.D. student at the University of Minnesota who leads the Voyageurs Wolf Project.

Researchers have known for some time that wolves eat wild blueberries and other fruit to supplement their largely meat-based diet. In fact, Gable and his colleagues have found that blueberries can make up to 83 percent of the July diet of the eight wolf packs they study in and around Voyageurs National Park.

It could mean that wolves are simply taking advantage of the blueberries growing abundantly and close together.

“And so for an animal like a wolf, they’re expending very little energy eating those berries,” Gable said. “And so it's possible that just sitting in a berry patch, not really moving a whole lot, is a better strategy than running around your territory looking for a fawn or a beaver in the middle of the summer.”

The findings could suggest that wolves are using berries to meet their pups’ minimum food needs, Gable said. Or, he said, maybe berries could help pups survive the lulls when adults are unable to kill beaver or deer.

Gable said as researchers learn more about wolves’ summer predation behavior, including how much time they spend foraging berries, they hope to better understand the significance berries play in wolves’ diets, and whether those berries reduce the number of prey — mainly deer fawns and beavers — that wolves kill in July and August.

In conjunction with the newly-published research, the Voyageurs Wolf Project also released what they believe is a first-ever video showing wolves eating berries.

Using 25 cameras, researchers recorded wolves stripping blueberry bushes. Gable said the video provides irrefutable evidence that wolves do indeed consume berries. “There’s been some skepticism about whether or not wolves really do this,” he said.

For the past five years, researchers have placed GPS collars on wolves from in and around the park. They collect location data from the animals every 20 minutes. That allows them to see where wolves stop long enough to eat. The location information helps researchers place cameras.

The technology has led to the surprising discovery that wolves hunt fish in shallow streams. They also stalk beaver which can make up as much as 42 percent of a wolf’s diet around the park.

The Voyageurs Wolf Project periodically shares findings and videos on their Facebook page.

To read the original article and see related outdoors reporting, follow this link to the MP News website.  https://www.mprnews.org/story/2020/02/12/new-research-from-northern-minn-shows-wolves-feed-berries-t...