Frost covers part of the face of University of Minnesota student Daniel Dylla during a morning jog along Mississippi River Parkway on Jan. 29, 2019, in Minneapolis.   Photo: David Joles | Star Tribune via AP

It’s true. Minnesota weather can change in minutes. But we also get some tremendous year-to-year variations in weather.

Last year at this time Minnesota was being overrun by the coldest arctic outbreak in 26 years.

One year ago on Jan. 28, the thermometer near Cotton, Minn., bottomed out at minus 56 degrees. That was the lowest ambient air temperature in Minnesota since the minus 60 degrees reading near Tower, Minn., on Feb. 2, 1996.

Factor in windchills during the cold outbreak and it felt like minus 64 degrees in northern Minnesota. 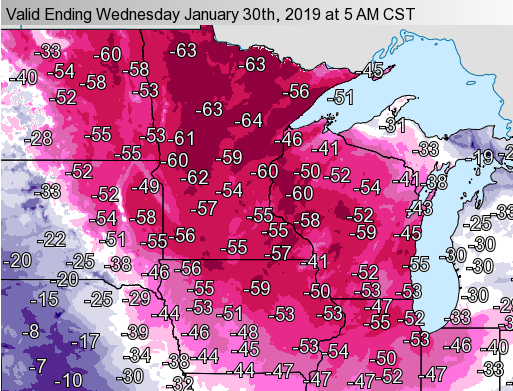 The mercury hit minus 56 degrees reading near Cotton, Minn., last Jan. 28. The forecast high temperature this Sunday for Cotton is around 38 degrees. 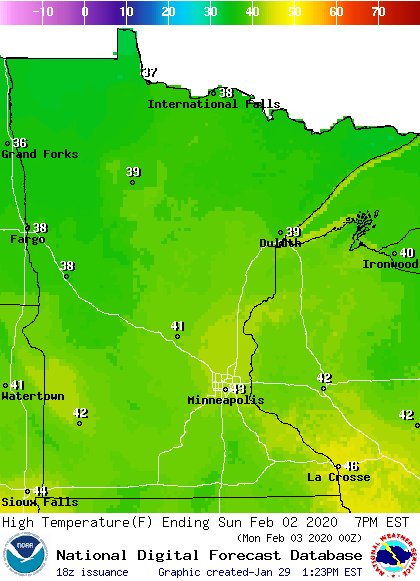 That’s an incredible temperature difference of 94 degrees in about a year.

Factor in windchills colder than minus 60 degrees last winter and it will feel about 100 degrees warmer (apparent temperature) than about a year ago in some Minnesota locations!

Why is Minnesota so extreme?

I’ve often called Minnesota the Super Bowl of weather. Minnesota is among the top 10 states in the U.S. with the highest historical temperature extremes. 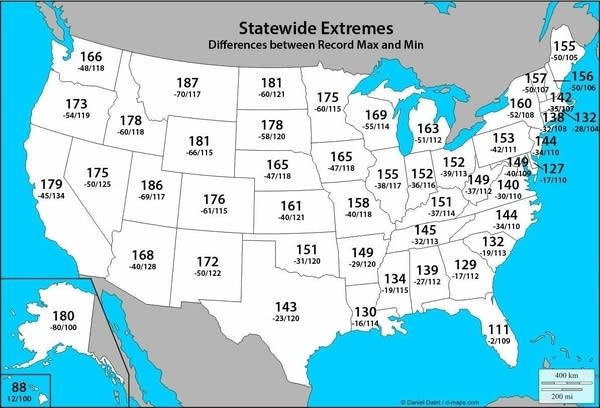 That’s because Minnesota lies in the center of a continent where vastly different air masses sweep in freely from many directions. Locations south and east of Minnesota closer to the moderating influences of the Atlantic Ocean and the Gulf of Mexico generally have more stable climates.

Many western states have huge temperature extremes in mountain/valley climates. But many coastal cities out west are also much more stable due to the moderating influence of the Pacific Ocean.

So as you experience the milder weather this Sunday, remember that it felt about 100 degrees colder about a year ago!

To read the original article and see related weather reporting, follow this link to the MPR News website.  https://www.mprnews.org/story/2020/01/29/winter-temperature-whiplash-parts-of-minnesota-94-degrees-w...