Many MLive readers have asked me if the lack of Great Lakes ice cover this winter will lead to lower water levels this summer. Here’s a look at what limited ice cover can do to water levels.

The warmer than average winter has led to limited ice cover on the Great Lakes as of January 27, 2020.

There is another correlation to a warmer weather pattern that affects the Great Lakes water levels.

Here is the evaporation deviation from normal on the Great Lakes over the past few years. 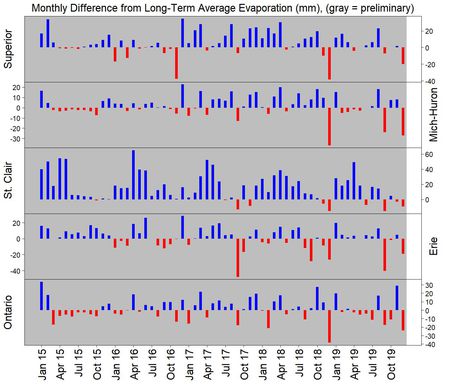 Evaporation (in mm) from the Great Lakes over the past five years. (U.S. Army Corps of Engineers data)

The center line is the historical average evaporation. The blue bars represent months with evaporation more than average. The red bars shows months that have had less evaporation than normal.

It was also that warm December that kept ice from forming on the Great Lakes.

One more thing to think about- what happens when temperatures are warmer than normal in winter? The warmer air holds more moisture, and precipitation can be heavier than average. The heavier precipitation can more than cancel out increased evaporation.

A great example of warm temperatures and increased precipitation comes from this month. 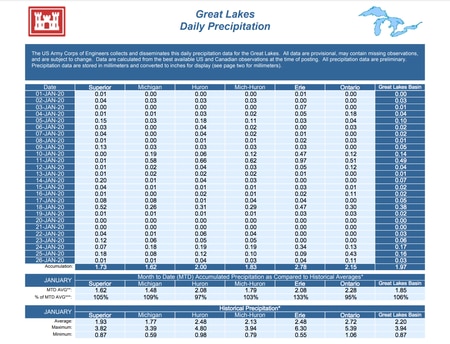 Look at the Lake Michigan-Huron column. This month there has been 1.79″ of rain on those two lakes, which is three percent above average. I know that’s not extreme, but it shows the warm air can also carry ample rain and snow.

So the question being asked- does lack of ice mean more evaporation and lower Great Lakes water levels? The answer is no because evaporation may actually be lower in warm weather, and precipitation could be heavier.

To read the original article and more weather reporting, follow this link to the mlive.com website.  https://www.mlive.com/weather/2020/01/does-lack-of-great-lakes-ice-mean-more-evaporation-and-lower-l...