Icy roads lead to hundreds of crashes in Minnesota; arctic air sweeping across the state Traffic moves slowly around a crash on Interstate 94 in Maple Grove, Minn., on Saturday.
Photo:  Minnesota Department of Transportation

The winter storm moving through the region dropped more than a foot of snow on parts of the North Shore. To the south and west, snow totals weren't as high — but some freezing drizzle left a coating of ice on the roads. And northwest winds gusting in excess of 40 mph at times caused whiteout conditions.

“We had a shot of rain that came through last night, and a lot of the roads are glazed over with some ice compaction on them," Tim McCoy, maintenance supervisor for the Minnesota Department of Transportation's District 8 based in Willmar, told MPR News on Saturday morning.

"But the big issue is we’ve got a lot of ground drifting, and that wind has increased. ... We’ll probably keep the roads open. The wind is going to keep howling all day today, so that’s a problem. ... When the wind blows, we can’t do anything with it because the chemical won’t stay on the roads." 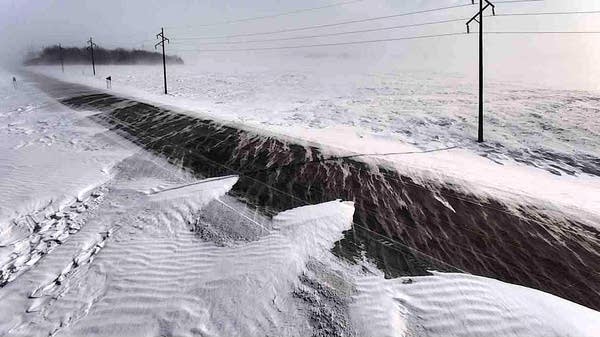 McCoy said it might be Sunday or even Monday before crews are able to fully clear all the highways in southwest Minnesota.

Those icy roads led to 341 crashes on state and federal highways between 6 a.m. and 4:30 p.m. on Saturday. The State Patrol also reported 302 spinouts or vehicles in the ditch, and 15 jackknifed semis. The Patrol said there had not been any fatalities or serious injuries.No-travel advisories remained in effect for a few Minnesota highways as of Saturday evening, including U.S. Highway 71 between Windom and Willmar. Road across the state were snow- and ice-covered.

South Dakota officials reopened Interstate 29 between Sioux Falls and the North Dakota border, though they still were advising against travel due to blowing snow and icy roads.

The cities of St. Paul and Minneapolis have declared snow emergencies as a result of the winter storm. Parking restrictions and night plow routes go into effect at 9 p.m. Saturday in both cities.  Snow emergencies also are in effect for some Twin Cities suburbs, as well as Mankato and Moorhead. 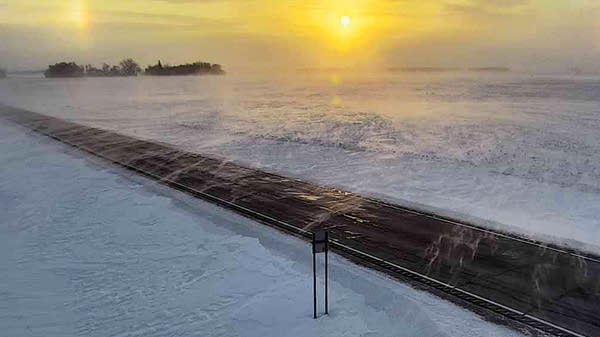 Snow drifts across State Highway 19 near Hendricks, Minn., not long after sunrise on Saturday.
Photo: Minnesota Department of Transportation

A weather spotter near Hovland on Minnesota's North Shore reported 16.5 inches of snow as of Saturday afternoon.

Other snow totals reported by the National Weather Service included 15 inches near Lutsen. 14 inches near Finland and 13 inches near Grand Marais.

Blizzard and winter storm warnings for much of Minnesota were set to expire Saturday evening. In their place, wind chill advisories were in place for the overnight hours.

Saturday's gusty winds funneled arctic air across the region. Wind chills late Saturday and early Sunday were forecast to drop to 25 to 35 below zero across much of Minnesota.

To read the original article and see related stories rereproting, follow this link to the MPR News website. https://www.mprnews.org/story/2020/01/18/gusty-winds-falling-temperatures-today-no-travel-advised-in...