The Kawishiwi River (right) flows June 12, 2019 near Ely, Minn. Areas to the left of the river is where Twin Metals plans to setup its mining operations.  Photo: Derek Montgomery for MPR News 2019 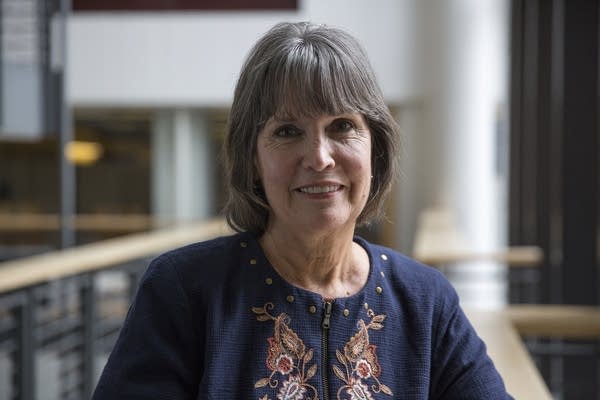 The bill would forbid new mining operations within the watershed of the Boundary Waters Canoe Area Wilderness, including a project proposed by Twin Metals Minnesota, which last month submitted plans to state and federal regulators to open an underground copper-nickel mine outside Ely, and just a couple miles from the southern edge of the BWCA.

“This bill establishes federal, permanent protections for this vulnerable and fragile ecosystem to ensure it is not damaged and polluted from sulfide-ore copper mining,” McCollum, DFL-St. Paul, said in introducing the legislation.

The proposal would not affect a copper-nickel mine project led by PolyMet Mining, which is proposed to be built south of the Twin Metals project, this one in the watershed of the St. Louis River, which flows into Lake Superior. Nor would it limit taconite, or iron ore, mining anywhere in Minnesota.

It’s the latest step in a tug-of-war playing out over the future of copper-nickel mining on federal lands in northeastern Minnesota. The clash began in late 2016, when the Obama administration made two moves to pause the momentum of mining around the Boundary Waters: It refused to renew mineral leases critical for the Twin Metals project, and it began to study the implications of a 20-year mining ban, or mineral withdrawal, that had been proposed for about 230,000 acres of the Superior National Forest in the Boundary Waters watershed.

But the Trump administration has steadily reversed those efforts, first returning and then renewing Twin Metals’ mineral leases, and then ending the study of the proposed 20-year mining ban.

This new legislation attempts to finalize, through Congress, what the Obama administration began through the executive branch, by withdrawing the same federal land from possible mineral development.

The bill has two Republican co-sponsors, including Florida Rep. Francis Rooney, who told McCollum at a press conference announcing the bill that “we are united with you to protect our national treasures.”

But Rep. Pete Stauber, a Republican who represents northeast Minnesota’s 8th District in Congress, said in a statement he was “outraged” to learn of the proposal, saying “this utter disregard for our way of life is insulting.”

The bill “intends to rob many of my constituents of their livelihoods,” Stauber’s statement continued. “I will fight this attempt at killing mining jobs in my district every step of the way. I’m confident that, with the support of the Trump Administration, our way of life will prevail.”

The mining industry also responded harshly to the proposal. Twin Metals called it “an attempt to bypass the rigorous regulatory and environmental processes already in place to review and permit mining and industrial projects on public lands.”

Frank Ongaro, director of the industry group Mining Minnesota, said the proposal affects more than just the Twin Metals project. It would also halt the efforts of other companies exploring in the Duluth Complex, believed to be one of the richest untapped deposits of copper, nickel and precious metals in the world.

“A permanent withdrawal of these lands would be catastrophic for the economic future of our state,” Ongaro said.

But a host of environmental groups cheered the bill’s introduction. “It’s no exaggeration to say that the fight against copper-sulfide mining is the most important environmental fight in the country right now,” said Chris Knopf, executive director of Friends of the Boundary Waters Wilderness.

Environmental groups often refer to this type of hard-rock mining as “copper-sulfide” mining, because it refers to minerals that are bound up in ore containing sulfides, which when exposed to air and water, creates sulfuric acid, which can leach heavy metals into surrounding waterways.

Historically, such mines have created severe water pollution. Most hard-rock mines in the U.S. are located in the arid west. But supporters of copper-nickel mining in Minnesota say modern technologies can protect the environment.

McCollum’s bill would appear to have little chance of becoming law under President Trump, who has twice expressed support for mining near the Boundary Waters on campaign swings through Minnesota.

But his administration has enacted mining bans in other parts of the country.

In 2018, then Interior Secretary Ryan Zinke finalized a 20-year mineral withdrawal in an area known as Paradise Valley in southwest Montana near Yellowstone National Park.

The administration also supported a similar withdrawal in an area about 175 miles east of Seattle, where a Canadian company was exploring for copper.

Congress eventually passed permanent mining bans for those areas, which were included in a wide-ranging public lands billthat Trump signed last year, withdrawing about 370,000 acres of federal land from potential mineral development in the two states.

McCollum is hoping for a similar result in Minnesota. She argues the BWCA is also a national treasure that deserves special protection.

“It’s intact today because people said this was a special place, and they moved to protect it,” she said. “If it’s going to be intact for tomorrow, we have to build on those centuries of protection, and uphold this national treasure.”