On Facebook, a parody page of Visit Bemidji, the community’s convention and visitor bureau, was created and named “Don’t Visit Bemidji”. The parody’s profile cover features a photo of the town’s iconic Paul and Babe statues with a red X placed across it.   Image: Facebook

Almost immediately after the 3-2 vote was cast on Tuesday, Jan. 7, which established Beltrami County as the first unit in Minnesota — and the second in the nation — to refuse refugee resettlement, a social media firestorm erupted, laden with calls to boycott the tourism-driven community.

Comments from thousands of people across the country poured in on Twitter and Facebook with many expressing that they would no longer vacation or spend money in Beltrami County because of their disapproval of the vote. 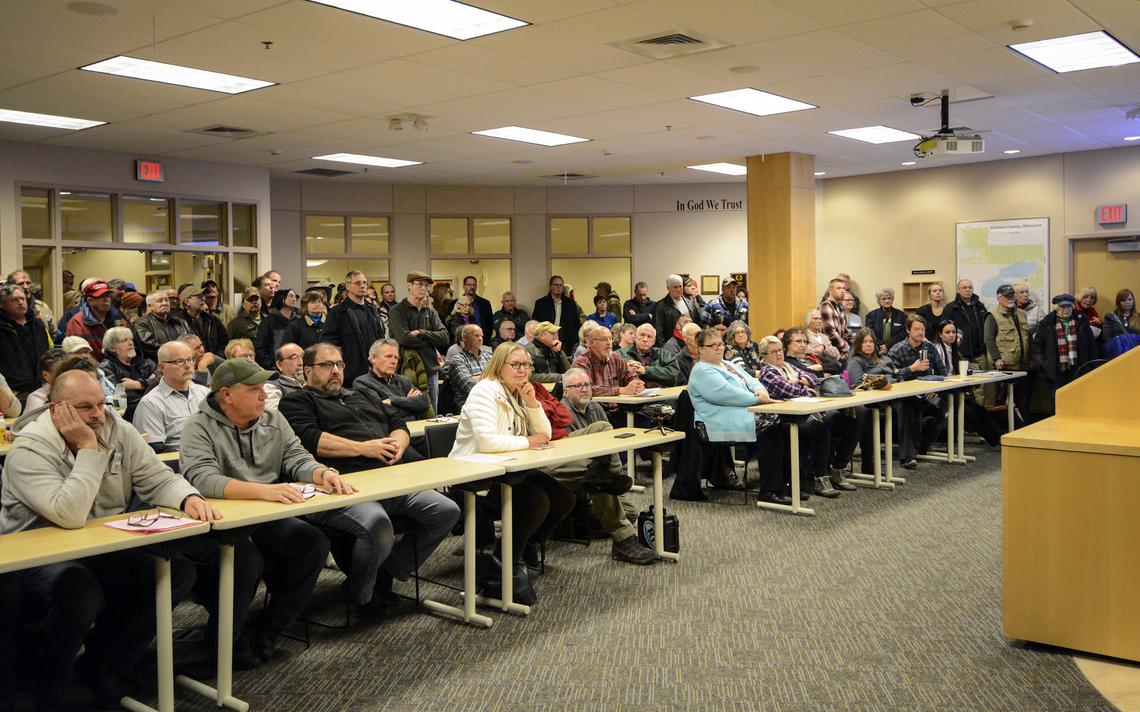 One Twitter user posted: “My family has vacationed in the Bemidji area for years. Time to make reservations somewhere else.”

Both posts included a “#BeltramiCounty” hashtag, which on Wednesday, became a trending topic on Minnesota Twitter. Others have also started a “#BoycottBemidji” hashtag.

On Facebook, a parody page of Visit Bemidji, the community’s convention and visitor bureau, was created and named “Don’t Visit Bemidji”. The parody’s profile cover features a photo of the town’s iconic Paul and Babe statues with a red X placed across it.

The page’s only written post, as of Friday, Jan. 10, reads: “If Bemidji doesn’t want to welcome refugees, people should find other, more welcoming places to spend their vacation dollars.”

On Wednesday, Bemidji Mayor Rita Albrecht wrote in an email to the Pioneer describing how the county’s vote has “created a lot of negative criticism for our community.”

From snapping a photo with Paul and Babe to indulging in lakeside resort vacations, a uniquely authentic Northwoods experience has lured tourists, from far and wide, to Beltrami County for generations – their dollars propelling the area into a tourism-driven community.

According to an Explore Minnesota report, Beltrami County’s Leisure and Hospitality industry was a lead earner in the Northwest region of the state, raking in over $102 million for 2017 – seconded only by Cass County, which made about $20 million more.

However, Beltrami County came out on top in the Northwest region at 2,219 for private sector employment in the Leisure and Hospitality industry.

And nearly 60% spent one or two nights, and a hotel or motel was the most frequently selected lodging facility. The highest spending of visitors was on lodging, followed by restaurants, shopping and transportation.

However, since the county’s politically and socially divisive vote on Tuesday, a question of how it will affect Beltrami’s tourism industry and overall economy has been raised as well as how officials in the county will respond to the firestorm.

Multiple social media users have tagged Visit Bemidji on Twitter, one user commenting: “@VisitBemidji needs a major overhaul of their Twitter profile, which states they’re a ‘progressive lakeside city’ with ‘enchanting culture.’ When our family heads up north, we’ll now be skipping right over the ‘culture’ of Bemidji.”

And while one social media user “in the market to buy a cabin” voiced their intention to avoid purchasing Beltrami real estate, others arose in the form of concerned parents.

On Facebook, one father posted, “I have two children approaching college age. They won’t be going to Bemidji State.”

Beltrami County and Bemidji are no strangers to a boycott.

Joined by Leech Lake and White Earth, then-Red Lake Tribal Chairman Roger Jourdain led a boycott of Bemidji area businesses in 1967 after Robert Kohl, a Beltrami County Commissioner and the owner of a local resort, went on a racially charged rant directed toward Native Americans on a live radio broadcast.

Anton Treuer, a professor of Ojibwe at Bemidji State University, detailed the event in an article written for Red Lake Nation News in 2013.

“The fact that Indians did half of the shopping in Bemidji and had none of the jobs was hard enough, but this was intolerable,” he wrote.

The boycott, which Treuer described as “a big step forward in (his) community,” only ended once Kohl apologized for his comments. The event convinced Joseph Lueken, owner of Lueken’s Village Foods, to put in place an affirmative action employment policy.

Since then, various issues over the years have encouraged a call for small boycotts in the county of about 46,000. But few, if any, of those issues have cast a nationwide shadow of reaction and scrutiny on Beltrami – much of which has been driven by social media usage that has provided a platform to call for a tourism boycott.

The Pioneer contacted Cynthia Messer, the Director of the University of Minnesota Tourism Center, for better understanding of a tourism boycott.

One study Messer sent the Pioneer via email said, “With the growing popularity of social media adoption worldwide and a corresponding increase in social movements and emphasis on ethical consumerism, tourism boycotts are becoming more frequent and (recurring)."

The study, which examined the effects of tourism boycotts by analyzing seven cases of Chinese tourism boycotts over the last decade, found that “boycotts can significantly decrease visitor numbers.”

And while boycotts created under non-political circumstances are found to have “immediate short-term impacts,” boycotts with political leanings “tend to have enduring effects.”

However, Messer concluded that based on her research findings, the study of tourism boycotts “is an emerging area of research, so there is not a lot.”

“The articles I found suggest that the negative impacts of a boycott can be economic and social,” she added. “The literature suggests that boycotts can decrease visitor numbers resulting in impact on businesses and employees, as well as on perceptions of the destination that could affect visitor decision-making."

While Beltrami County remains divided on Tuesday’s refugee vote – and its impact on tourism and the economy is not yet known – Bemidji City Manager Nate Mathews said he also continues to receive emails and phone calls from the public informing him of wanting to boycott Bemidji.

“People who've said they've vacationed here for years, and they're no longer interested in visiting a community that can be perceived as not welcoming to newcomers,” Mathews said. “It's painful to hear that, but we want to tell people who are expressing that to us that we still want them to come here and that our community is a welcoming place.”

Mathews encourages anyone who feels frustration with the current political and social climate of the county to reach out to him.

"We work hard as a staff and the City Council does try to be accommodating and welcoming to everybody. We serve the public, that's why we got into this profession," he added.

The study referenced in this article is called "Tourism boycotts and animosity: A study of seven events" and can be found here.

To read more of this story and related reporting, follow this link to the Pioneer website.  https://www.bemidjipioneer.com/business/tourism/4859940-Vote-fuels-possible-tourism-backlash-for-Bel...