Operators of Thunder Bay's two ski hills say the snowy weather and relatively warm temperatures this winter are contributing to one of the best seasons ever for each of the mountains' current owners.

"It's been super mild weather, and there's been lots of fresh snow hitting the ground. It's just been great conditions since day one really this year."

Staff start making snow in November and usually don't stop for about eight weeks, Cameron said.  But this year, they only needed to make snow for three or four weeks before mother nature took over.

"And we've got as much base as we generally have at this time of year, if not more," she said.

"We're shaping up for one of our best seasons ever."

In fact, for the first time, she said, staff had to clear an extra parking lot to accommodate all the traffic. 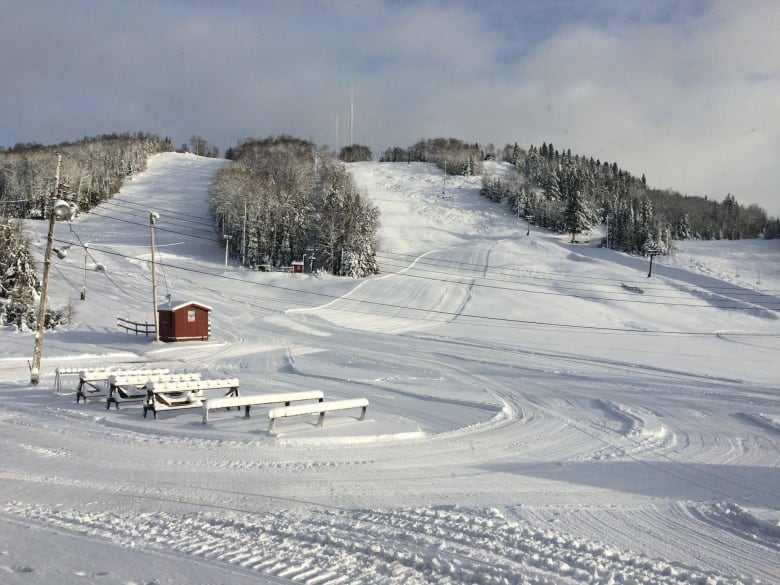 Mount Baldy Ski Area co-owner Jason Kardas told CBC he and his brothers, with whom he co-owns the facility, feared losing business this year because a planned new chair lift couldn't be installed this season, even though the previous one had already been torn down.

But despite relying on a T-bar and snow-taxis to get guests to the top of the runs, "numbers have been actually unreal," he said, adding that the mountain broke a new one-day revenue record on Saturday.

"It's not often you can be as busy as we are right now without a chair lift," he said.

Kardas estimates attendance is up five to 10 per cent over last year, in part because the entire hill is also open early.

"Not to mention the weather's so nice," Kardas added. "Last year, New Year's, you had a minus 30.  This year you have minus three."

For Cameron's part, she credits some of Loch Lomond's growth to its ski school, which she said has worked hard to attract school-age students to the hill through school programs.

Staff have noticed a sharp spike in attendance by nine to 13-year-olds, she said,  And now they also seem to be seeing their parents.

"The last few weeks over the Christmas break, we've been noticing a lot of people bringing their old equipment out and getting a tune-up done on them," she said.

To read the original article and see related reporting, follow this link to the CBC Thunder Bay website.  https://www.cbc.ca/news/canada/thunder-bay/thunder-bay-ski-season-unreal-1.5415709