Traffic was at a near-standstill as crews respond to an overturned semi along Interstate 494 between Robert Street and Dodd Road in Inver Grove Heights, Minn., on Saturday morning after freezing rain moved through the area.  Photo:  Minnesota Department of Transportation

Freezing rain turned freeways and sidewalks into chaotic skating rinks across the Twin Cities and much of southern Minnesota early Saturday, leading to hundreds of crashes — at least two involving fatalities.

Spinouts, jackknifed semis and vehicles in ditches brought traffic to a standstill on metro-area highways for much of the morning, until rising temperatures started to melt the coating of ice. The Minnesota Department of Transportation lifted its no-travel advisory for the Twin Cities just after noon, though it urged drivers to watch out for icy roads and use caution through the weekend.

Meanwhile, freezing rain and snow continued across much of western and northern Minnesota, where snow totals could reach a foot in some areas by Sunday evening. 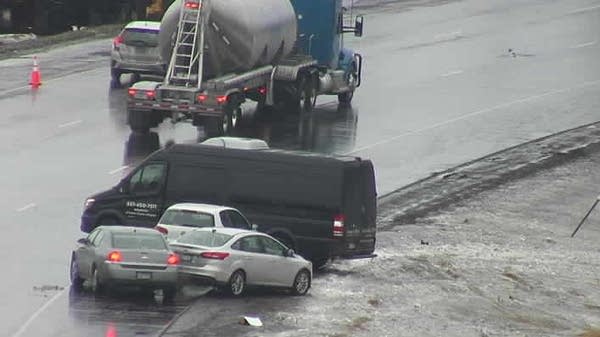 Several vehicles are piled up after spinouts along Interstate 494 between Robert Street and Dodd Road in Inver Grove Heights, Minn., on Saturday. Photo: MN DOT

Even with limited traffic on a weekend morning, the Minnesota State Patrol reported 357 crashes on state and federal highways in just five hours Saturday, between 5 a.m. and 10 a.m. Two of those crashes involved fatalities; one near St. Cloud and the other near Lino Lakes.

There also were 149 spinouts or vehicles in the ditch, and 13 jackknifed semis in that five-hour span. Those statistics do not include city or county roads.

“We were expecting some rain,” Minnesota Department of Transportation spokesperson Jake Loesch said Saturday morning. “It was a little bit unpredictable coming into the Twin Cities, where exactly that line of snow and rain would be, and it looks like temperatures were just cold enough in the Twin Cities to freeze everything right as that rain was coming down."

"It's hard for us to get salt down in advance because the rain would wash it away, but then when it gets cold and it freezes, it's hard for our crews to get out and work," Loesch said. "Our plows are out and they're salting, but with this many crashes on the road, it makes the work really slow going and it's hard to get around." 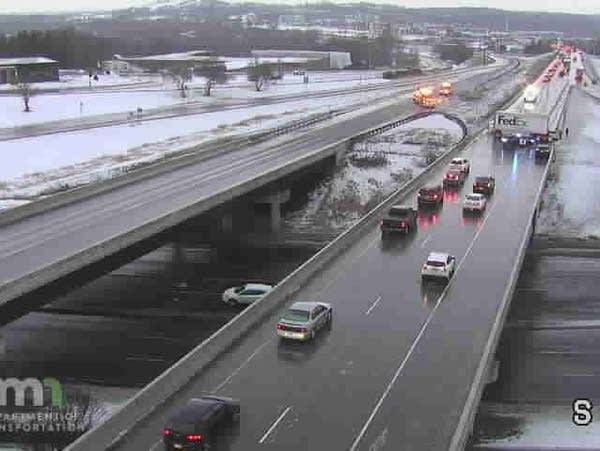 A jackknifed semi blocks traffic on Interstate 35E near the 35 split in Burnsville, Minn., on Saturday after freezing rain moved through the area.  Photo: MN DOT

While MnDOT lifted its no-travel advisory, the agency continued "to urge motorists to drive with extreme caution and postpone travel if possible, as slippery and icy conditions may persist throughout the weekend."

“Even when the roads look safe, they may look clear, especially this time of year — you can’t drive with enough caution,” Loesch said. “Black ice can appear out of nowhere in shaded areas on the road, certainly on bridges, where it’s usually a little bit colder so things can freeze over easier. It’s really important that people use caution, slow down and drive carefully. Ice can form unexpectedly and you can’t use enough caution, especially in these icy conditions.”

Metro Transit announced just after 7:30 a.m. that it was suspending bus service in the Twin Cities until conditions improved. Bus service formally resumed just before 12:30 p.m., but Metro Transit said delays were expected through the afternoon. Light rail service was not affected.

Metro Mobility was still operating Saturday "where safe operations are possible" in the Cities. The service asked riders to cancel unnecessary trips.

State Patrol spokesperson Lt. Gordon Shank reminded people to drive slow, buckle up and move over — or slow down, if you can't move over — when passing emergency responders working on the side of the road.

“If you do find yourself on the shoulder, in the ditch, make sure you stay in your vehicle and stay buckled up, call 911 and we’ll get there as soon as we can,” Shank said.

As of 8 a.m., the Minneapolis-St. Paul International Airport reported two of its four runways were operating. At one point earlier in the morning, the airport had been down to one runway as crews worked to clear the ice. As of 3 p.m., the airport had seen more than 100 flights delayed; officials said anyone flying out of the airport on Saturday should check with their airline.

Travel also was difficult south of the Twin Cities along Interstate 35 and U.S. Highway 52, and north along I-35 toward Duluth.

It was tough going for pedestrians, too, as the ice coated sidewalks. Some Twin Cities residents posted videos to social media showing people skating down the icy roads and sidewalks.

A winter weather advisory is in effect for the Twin Cities until 3 p.m. Saturday. The freezing rain and sleet is forecast to change over to rain during the day in the Twin Cities and southeast Minnesota.

To the north and west, the precipitation is forecast to remain as snow or ice through the weekend. An ice storm warning is in effect for southwest Minnesota, with winter storm warnings for about the northwest half of the state. Snow accumulations may reach a foot this weekend in communities including Madison, Alexandria, Moorhead, Crookston and Bemidji.

To read the original article and see more storm related reporting, follow this link to the MPR website.  https://www.mprnews.org/story/2019/12/28/freezing-rain-causing-havoc-on-highways-in-parts-of-minneso...