Taking in ‘little treats’ on a Minnesota winter birding trip Katie Burns perked up at the sight of a small, dark blob on an island in the middle of the Mississippi River.

That blob, she deduced, was an American kestrel — the tiniest species of falcon, which weighs as much as a stick of butter but preys on mice, insects and other birds.

As Burns described how the kestrel’s pointed, aerodynamic wings helped reveal its identity, another sight caught her eye.

“Oh, look it — swans!” she said, as a pair of trumpeter swans glided high above.

Burns was having what she calls a bird moment. “You might call them squirrel moments,” she said. “We call them bird moments.” 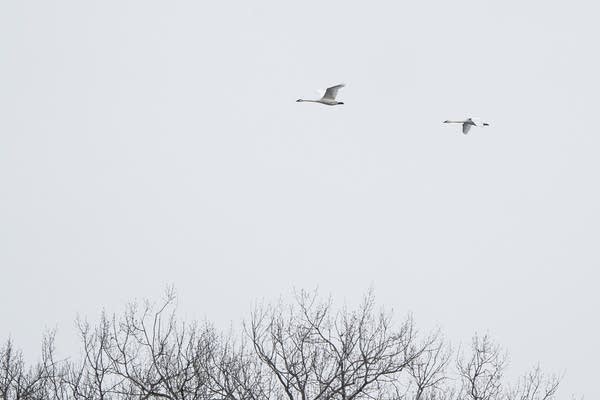 It was one of many bird moments during one morning excursion last week when Burns, Audubon Minnesota’s outreach coordinator, made a convincing case for why birding is perhaps the least expensive and most accessible outdoor activity in the winter.

At Coon Rapids Dam Regional Park, Burns spotted mergansers, blue jays, swans, a bald eagle, chickadees, a kestrel and two types of woodpecker. All this life and activity was seen in just a couple hours on a chilly morning 20 minutes north of downtown Minneapolis.

Intense birders will keep lists of the full scientific names of the birds they see and carry $2,000 spotting scopes. That’s entirely unnecessary to enjoy birding, though. Burns said birding can be as active or passive as you’d like — an addition to any time spent in nature.

“One of the great things about birding, any time of year, is that it gives you a chance to kind of let everything else fall away and just be where you are,” she said. “Just enjoy the space that you're in. Take a deep breath and just kind of take it all in. And the birds are little treats along the way.”

Over the holiday season, birders from around the country collaborate for the Christmas Bird Count, an annual Audubon event that serves as a volunteer-run survey of the early winter bird population.

This is the project’s 120th year and it runs through Jan. 5. Burns said anyone can participate; no birding expertise required. Part of birding’s appeal is how simple it is to get started.

Much of birding is looking for abnormalities in the landscape — a cluster in the tree canopy, or a splash in the water. “We’re looking for things that don’t belong,” Burns said.

Then, inspect it a little closer. Binoculars and a birders’ field guidebook (there are phone apps for this, too) are helpful pieces of equipment to enhance your birding experience. 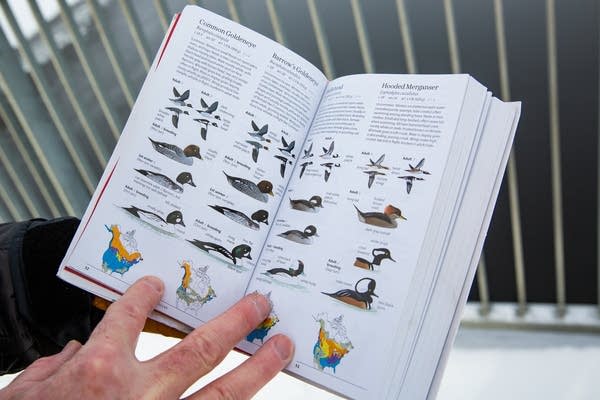 In winter, birds are drawn to whatever open water they can find. That’s why Burns went to the Coon Rapids Dam. Above and below the dam, there were large pools of open water.

But birds are everywhere, even in winter, and sometimes in less conspicuous places.

Approaching a dead tree, Burns could tell the holes on its side were fresh. Woodpeckers had been foraging for food. While this tree may appear useless to human eyes, it’s not.

“It's quite the opposite,” she said. “Even after a tree dies ... this is essential habitat. It's nesting habitat. It's good foraging grounds for many different species of birds.” 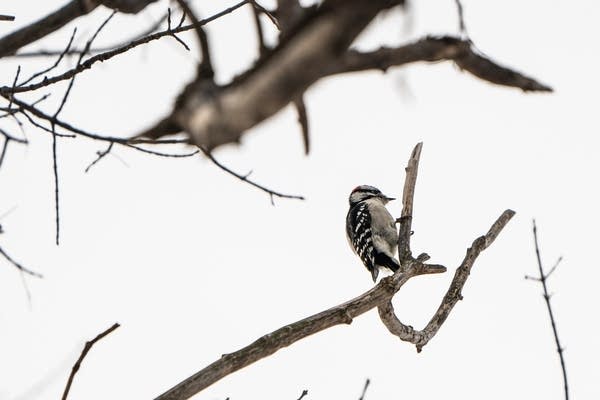 Burns recommends visiting your local nature center, or try a state or national park. She said many of them have bird feeders and will loan out binoculars and birding guides.

“We live in such a special place,” said Rob Schultz, executive director of Audubon Minnesota. “When you think about all of the migratory birds that pass through the United States, about 60 percent of them follow the Mississippi River flyway.”

One of the most rewarding parts of birding, though, is the easiest. Be still and listen to the songs.

“When you come out, there’s all these different bird species out here,” Burns said. “It’s almost as if it’s your own personal theater.”

To read the original article and hear an audio report of this story, follow this link to the MPR News website.  https://www.mprnews.org/story/2019/12/24/winter-birding
Outdoors