Steve Tatro backs the bus out of the Two Harbors bus garage at 6:14 a.m. Thursday in Two Harbors, Minn. That day, he filled in as a school bus driver, a substitute teacher and a hockey referee.  Photo:  Derek Montgomery for MPR News

At 6:11 a.m. last Thursday, a cold, snowy, dark morning in Two Harbors, Minn., Stave Tatro was just getting ready to start his day.

Tatro, 65, started up a big yellow school bus — Lake Superior School District bus No. 7. He honked the horn twice, eased it out of a big garage and headed outside of town past forests, fields and scattered homes.

“A lot of rural families live out here,” he said, stopping to pick up his first passengers. It’s still pitch black outside. Their mom waits with them by the side of the road. “It’s quite a bus ride for them.”

Tatro retired over a decade ago after a successful career in the banking industry. He got his bus driver's license last year when a friend told him the school district was short of drivers.

Tatro subs for drivers who are sick or on vacation. He estimates he’s filled in about 20 times since he got certified last winter. It’s getting harder for school districts like Lake Superior to find drivers like Tatro.

“It’s a struggle,” said Dennis Wagner, the transportation director for the district. "This is not the kind of work that people seem to want to do anymore.

Wagner said many people are looking for full-time jobs with benefits. Some don’t want to work a split shift — with a route in the morning and then again in the afternoon. And with a strong economy, there are a lot of other jobs out there for would-be drivers.

He expects an even bigger struggle next school year, when he is bracing for several drivers to retire.

"Every school district in the United States is having the same trouble,” he said. “You can go through downtown Minneapolis or a town of 600 people, and there’s a sign, ‘Bus drivers wanted, now hiring.’"

After more than an hour behind the wheel, Tatro, sporting a red and black flannel cap and a USA Hockey jacket, drops off a load of students at the elementary school.

"Have a good day everybody!" he shouts. 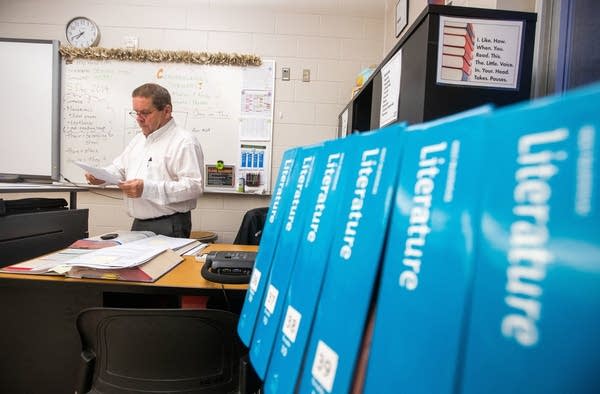 Steve Tatro examines the lesson plans left for him before the start of the school day Thursday at Two Harbors High School. Photo:Derek Montgomery for MPR News

After dropping off more students at the high school, Tatro has about a half hour to prepare for his second job of the day: substitute teaching a seventh grade English class.

He begins by reviewing the differences between their, there and they’re, “which is separated by what?” he asks. An apostrophe, a student correctly responds.

Tatro began substitute teaching 13 years ago, just a few months after he retired from a successful career in banking, where he worked in computers.

"I was getting bored,” he said. “When you retire young, there’s not a lot of friends that are retired with you. A guy can only go out fishing so much by himself or on the golf course."

Tatro did not have a background in teaching when he began subbing. But now he fills in for everything, from English to Honors Chemistry. Metal shop is his favorite class.

He remembers kids giving substitute teachers a lot of grief when he was young. But he says students he works with are pretty respectful.

“The important thing is that you respect them first. If you can’t give it, you can’t earn it,” he said.

People like Tatro, who says he works in some capacity pretty much every day during the school year, are a godsend to school administrators, said Two Harbors High School Principal Jay Belcastro.

"Substitute teachers are near and dear to all districts,” he said.

In a recent report, nearly half of all school districts in Minnesota called a shortage of substitute teachers a serious challenge. And 4 out of 10 districts say that shortage has gotten worse over the past five years.

Like with the bus driver shortage, Belcastro blames it partly on the economy. It's hard to find subs when there are lots of other jobs out there.

"I think it’s a testament to the fact that the economy and the unemployment rate is good,” he said. “So from the perspective of people looking for employment, there’s plenty of jobs out there. Every day if you walked into the the Two Harbors High School office and saw our secretary Roni, I say to people, she’s solving the Rubik's Cube."

To plug holes, he asks teachers to give up prep time to fill in or to combine study halls.

"It’s an everyday issue for us," said Belcastro.

He picks up a busful of students at the elementary school, drops them off and then heads over to the hockey arena for the start of job No. 3. 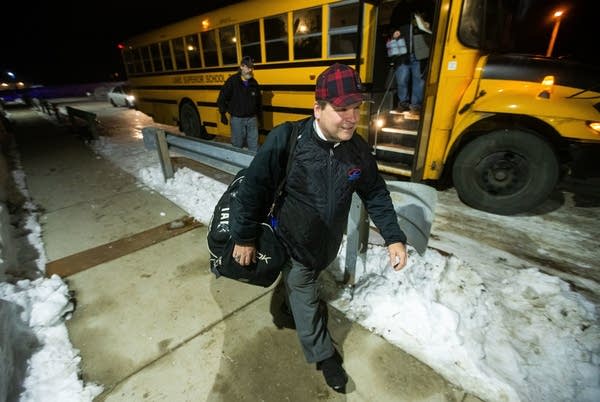 But he doesn’t just drive the bus. He's the referee for the game.

There's also a shortage of referees in hockey and other youth sports. Tatro and others attribute it to the verbal abuse they take. Rick Anderson of Duluth, who's officiating the game with Tatro, said younger people aren't putting on the pinstripes.

"It’s a problem,” he said. “They find they can do other things, make better money. And not have to put up with getting yelled at."

It's after 10:30 p.m. when Tatro pulls up to the hockey arena in Two Harbors, the end of a 16-hour day. He wouldn't like to do the same schedule every day. But he says it's important to highlight the needs in Two Harbors and other communities.

“I look at it as ... community involvement, and making sure we are doing the right things for our youth, so when they get on in later life, maybe they can do the same thing.” 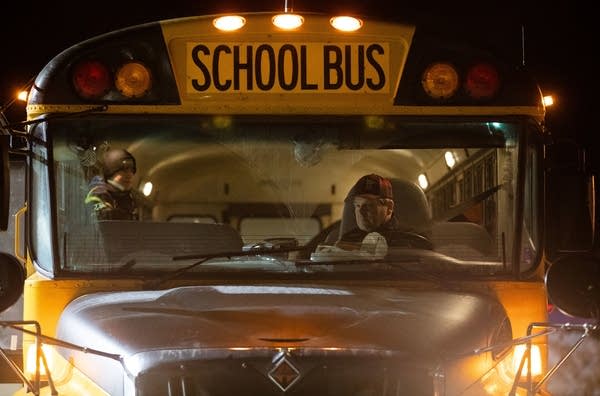 9:06 p.m.: After beginning a school bus route at 6 a.m., an eight-hour substitute teaching shift at 7:30 a.m., another school bus route at 3:30 p.m., hauling the North Shore Storm boys hockey team from Two Harbors to Moose Lake, officiating that very game, Steve Tatro waits in his bus with just one more job to do and that is to take the North Shore Storm boys hockey team back to Two Harbors from Moose Lake on Thursday in Moose Lake.  Photo: Derek Montgomery for MPR News

To read the original article, listen to an audio report of this story and see related reporting, follow this link to the MPR News website.  https://www.mprnews.org/story/2019/12/11/two-harbors-man-fills-three-community-needs-in-one-long-day
News