A new section of Enbridge's Line 3 pipeline sits in the ground across the street from a farm south of Superior, Wis.  Photo: Derek Montgomery for MPR News 2017

Minnesota officials have released a revised environmental review of the proposed Line 3 oil pipeline replacement, a step that will restart the regulatory approval process for the oft-delayed, controversial project.

The new environmental impact statement, or EIS, completed by the Minnesota Department of Commerce, was revised to include an analysis of the impacts of a potential oil spill into the Lake Superior Basin.

The addition was made after the Minnesota Court of Appeals ruled in June that the EIS needed to consider such a spill. Environmental groups and tribes had sued to try to block the project, arguing, among other things, that the project’s EIS was inadequate.

The Court upheld the majority of the environmental review but sent it back to the state commerce department to update it with the additional analysis of Lake Superior.

The updated review analyzes a hypothetical oil spill into Little Otter Creek near Cloquet, which eventually flows into the St. Louis River, before tumbling over rapids and waterfalls into Lake Superior.

The new analysis found that even with a worst-case spill that released oil for 24 hours into the creek, “it is unlikely that any measurable amount of oil would reach Lake Superior.”

Enbridge officials called the release of the revised EIS a very important step forward for the project.

The spill analysis, by design, did not include any response from Enbridge or other emergency crews for a 24-hour period. “In reality,” the company said in a statement, “Enbridge crews would respond immediately and aggressively to actively address the spill and begin cleanup.”

Line 3 was built in the 1960s, one of five pipelines Enbridge operates that transport oil from Alberta, across northern Minnesota, to its terminal in Superior, Wisconsin. But the line is cracking and corroding and requires regular maintenance. Because of those integrity concerns, Enbridge has reduced the amount of oil it pumps through the pipeline to about half its original capacity.

The company has proposed replacing the line with a new one, which would be able to pump nearly 400,000 barrels of additional oil per day, along a new route across northern Minnesota.

Environmental and tribal groups have bitterly fought the project for years, arguing it would worsen climate change, and risk spills in sensitive lakes and rivers in northern Minnesota, including land where Native Americans retain rights to hunt, fish and gather wild rice.

Those groups had a much different reaction to the release of the revised environmental study.

“As before, the data shows that Line 3 would hurt Minnesotans,” said Andy Pearson with the group MN350. “Now we know that a spill into Little Otter Creek could travel 20 miles in just 24 hours and send over 500,000 gallons of tar sands crude in the direction of Lake Superior,” he said.

Pearson cited a 2010 oil spill on a different Enbridge pipeline in Michigan, which dumped more than a million gallons of oil into the Kalamazoo River. Seventeen hours passed before workers shut off the pipeline after the leak began. 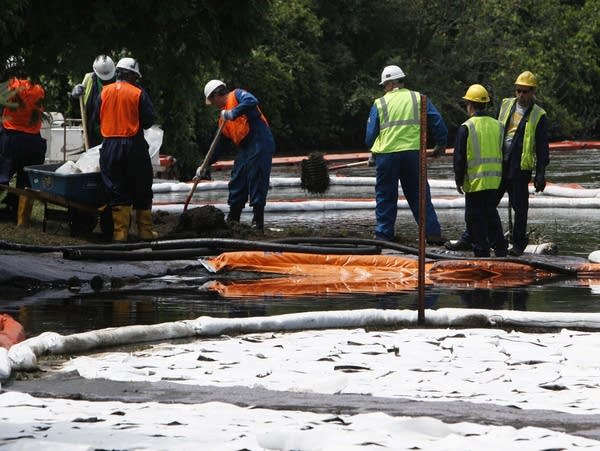 Crews clean up oil, from a ruptured pipeline, owned by Enbridge Inc., near booms and absorbent materials where Talmadge Creek meets the Kalamazoo River as in Marshall Township, Mich.  Photo: Paul Sancya | AP 2010

Enbridge says its record has improved since then. In 2018, the company transported nearly 3.9 billion barrels of oil across all its North American pipelines, the highest amount in its 70-year history. At the same time, officials said Enbridge set a new company benchmark for safety, spilling 206 barrels in four incidents, three of which were contained on company property.

Despite the risk of spills and the impacts that burning additional oil would have on climate change, Minnesota utility regulators approved the Line 3 project in the summer of 2018, citing safety concerns of the degrading pipeline.

Enbridge has already completed the new pipeline in Wisconsin and Canada. The Canadian portion of the project went into service last week. But the $2.9 billion replacement in Minnesota (and a 13-mile segment that crosses North Dakota) has been held up by regulatory delays and legal challenges.

Now that a draft of the revised EIS has been submitted, the public has until January 16, 2020 to comment on it.

The Minnesota Public Utilities Commission said an administrative law judge would also take comments in person on Dec. 19 in Duluth at the Radisson Hotel, from 1-4 p.m. and again from 6-9 p.m.

In filings with the PUC, many pipeline opponents had asked for at least a 60-day comment period, including one public hearing held before PUC commissioners somewhere within the Lake Superior watershed.

After the comment period ends, the Department of Commerce will then weigh any new information before issuing a final revised EIS.

The Minnesota PUC must then, once again, vote on the adequacy of the environmental review. It then would have to again vote on the project’s two main approvals: the Certificate of Need, and the route permit.

The company also still needs to secure additional permits from state and federal regulators. Additional legal challenges are also likely, including, possibly, from the Minnesota Department of Commerce, which previously, under the Dayton administration, sued to try to block the project, arguing the state didn’t need the additional oil the pipeline would carry.

Enbridge Line 3 director Barry Simonson said he anticipates construction of Line 3 starting in mid-2020. He said it would take seven to nine months to build the roughly 350-mile long project.

To read the original article and see related reporting, follow this link to the MPR News website. https://www.mprnews.org/story/2019/12/09/fresh-line-3-review-unlikely-any-spilled-oil-would-reach-la...