If you drive down Highway 61 on Minnesota's North Shore, don't be alarmed if you come upon a massive 20-foot sculpture of a paddle. Gopher superfan Jon Benson carved it himself with a chainsaw. It stands outside his home in Schroeder, in view of Lake Superior.

"I have been a huge Gopher fan for my entire life and I also love to canoe," Benson told Patch. "My career is based around the conservation of natural resources where I work with the Boundary Waters Canoe Area Wilderness. When Coach Fleck came to Minnesota with his Row The Boat mantra I thought it was a great fit considering we have the BWCAW in Minnesota. "

"I have had this idea in the back of my head for a couple of years," he added. "The success of this year's team, Coach Fleck, and a suitable tree really got me motivated."

Benson says he attended well over 100 Gopher games growing up. His mother worked as the executive assistant for the University of Minnesota president.

Benson's parents met at the Gophers-Badgers game in 1975, when quarterback Tony Dungy led Minnesota over Wisconsin, 24-3 .

"There was never any doubt about where I wanted to attend college, but the fact that the University had an outstanding College of Natural Resources didn't hurt."

"I haven't done much in the way of artistic cutting," Benson admits. Inspired by another famous Fleck saying, "change your best," he thought there's no better way to change his best than by carving a 20-foot tall paddle out of a standing tree. 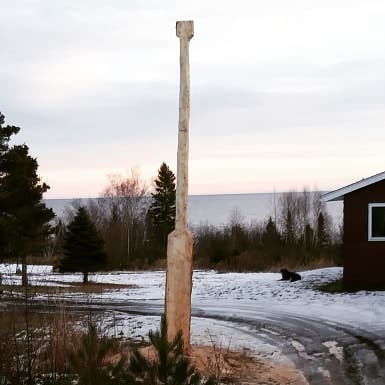 After two trees on his property were blown down during storms, Benson decided to take the top off of a third tree — a spruce that was leaning over his garage — before it blew down, too.

"I topped the tree so it was a 25 foot tall stump last year," says Benson. "At that point I started thinking about doing something with it since I live on Highway 61 and it seemed like it would be fun for folks driving on the North Shore Scenic Drive to have a large paddle sculpture as they entered canoe country."

Benson estimates it took him about seven or eight cutting sessions to carve the paddle, with each session lasting between two to four hours.

"I had to get up there with a 30 foot ladder to start stripping bark so the tree would dry appropriately and the bugs wouldn't eat away the heartwood. After that I was lucky enough to have a friendly neighbor who is a roofer and was willing to loan me his scaffolding which made the chainsaw work a lot safer."

When ESPN College GameDay comes to Minneapolis to preview the Gophers-Badgers game, Benson will be in the crowd.

"I have been hoping the Gophers would someday have a season worthy of a Gameday visit and this Saturday, which will be four days before my 40th birthday, that dream will come true."

Benson says it won't be possible to bring the paddle down with him, as it weighs a few hundred pounds, "unless Gameday wants to fly it in as the celebrity guest picker."

"I would be lying if I said the thought of what it would take to bring it to Gameday had not crossed my mind."

As for the score, Benson predicts a victory for Minnesota: Gophers: 31, Wisconsin: 13.

"Paul Bunyan's Axe Stays home and now Paul Bunyan has a paddle on the North Shore to go with his axe."

To read the original article and see related reporting, follow this link to the patch.com website. https://patch.com/minnesota/across-mn/minnesota-gopher-superfan-carves-20-foot-paddle-chainsaw