A member of the Royal Canadian Mounted Police holds Scott Wheeler's identification while asking another officer to collect the passports of Wheeler's passengers. Wheeler was pulled over for inadvertently driving into Canada from Canusa Avenue, which straddles the U.S.-Canadian border.  Photo: Ian Thomas Jansen-Lonnquist for NPR

Scott Wheeler was born and raised in what's known as the Northeast Kingdom, the rugged and beautiful countryside where Vermont abuts Canada. Even so, he didn't realize he was supposed to check in with Canadian immigration authorities when driving across the border recently.

Two polite, officious Mounties tell him to make a U-turn and follow them back to the port of entry where he's questioned about his intentions inside Quebec. He explains his mistake, and eventually the Mounties return his identification and he's free to go.

"That's pretty much life on the border; it's changing," Wheeler says, resignedly. 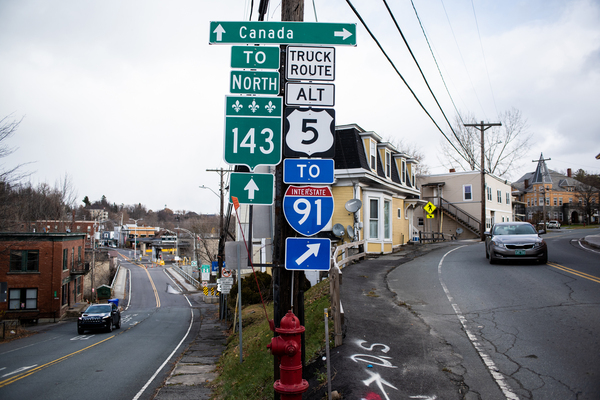 Road signs indicate the many ways to get to Canada from the center of Derby Line, Vt. The number of illegal crossers is on the rise.  Photo: Ian Thomas Jansen-Lonnquist for NPR

While the southern border gets all the attention with President Trump's massive wall and the backlog of desperate asylum-seekers stuck in Mexico, things are tense on the northern border with Canada, as well. The number of illegal crossers is on the rise. And residents complain that heightened security has changed the character of the once-neighborly frontier.

"It's even confusing for a local to understand," says Wheeler, a former state rep and history buff who publishes the Northland Journal. "Back when I was growing up you could come across the border with a wave to the border agents."

In the last two fiscal years, U.S. Customs and Border Protection has logged a 400% jump in apprehensions of people crossing illegally from Canada. That's the biggest increase anywhere along the 5,525-mile northern border. 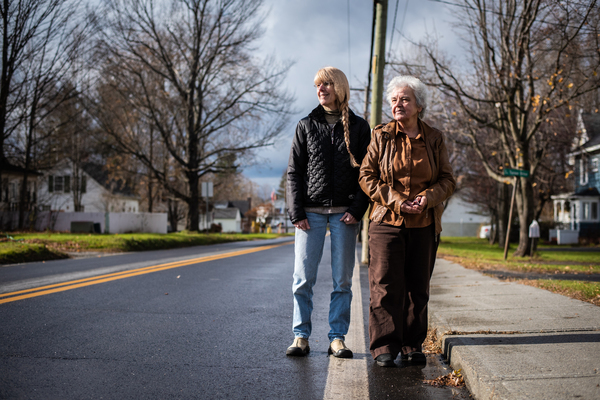 Neighbors Janice Beadle (left) and Marie Vallieres stand on their respective sides of the white stripe that marks the international border on Canusa Avenue, with the U.S. on the left and Canada on the right. Photo: Ian Thomas Jansen-Lonnquist for NPR

Border authorities made it harder to cross freely after the Sept. 11 terrorist attacks, but things have gotten even stricter since President Trump took office.

Consider Canusa Avenue — the name is a hybrid of Canada and USA. The international boundary runs for a third of a mile along this street. This is where Wheeler inadvertently turned into Canada.

There are 14 houses, with Americans living on the south side of the street and Canadians on the north. Two residents recently met on their respective sides of the white boundary line.

"We cannot leave our street on our own free will," says Janice Beadle, who describes herself as a retired snack bar owner, dairy worker and maple syrup maker. 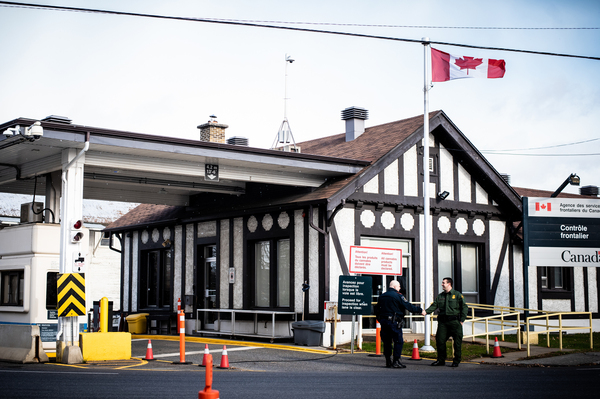 She owns a century-old yellow house on the U.S. side, which she's trying to sell. Because of the CBP checkpoint at the end of her street, Beadle has to identify herself to a uniformed agent every time she goes to the drugstore or gets groceries.

"You get asked a lot of questions," she says, exasperated. "And sometimes they want proof you live here, even if they know you!"

Then last year, it got worse. A big steel barrier was installed at the end of Canusa Avenue to control vehicle access. 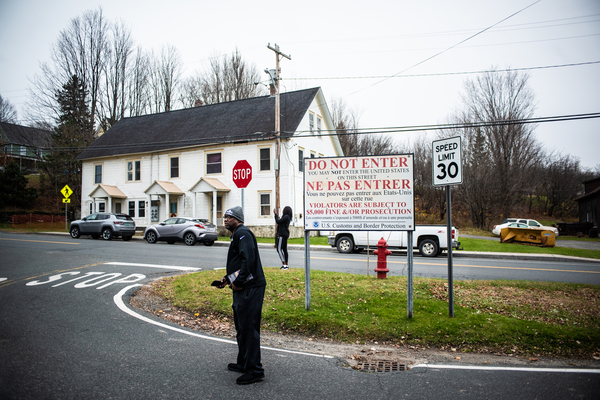 Charles Harvey (center) and Tonya Wyche stopped to see the Haskell Free Library and Opera House, which sits on the U.S.-Canada border, on their way back from a vacation in Montreal. The library serves residents of both Stanstead, Quebec, and Derby Line, Vt.
Photo: Ian Thomas Jansen-Lonnquist for NPR

"To me, I feel it's very intimidating just to have the barrier there," Beadle says, "It's like a wall."

Marie Vallieres, a retired nurse, is her neighbor in Canada.

"I used to be able to cross over and see my friend that used to own that house, and just go have a glass of wine with her and come back," Vallieres says. "And now, like Janice says, it's a barrier and we feel it."

These days, Vallieres likely wouldn't even be able to take a bag of fresh-baked cookies to her neighbor without drawing the attention of authorities. 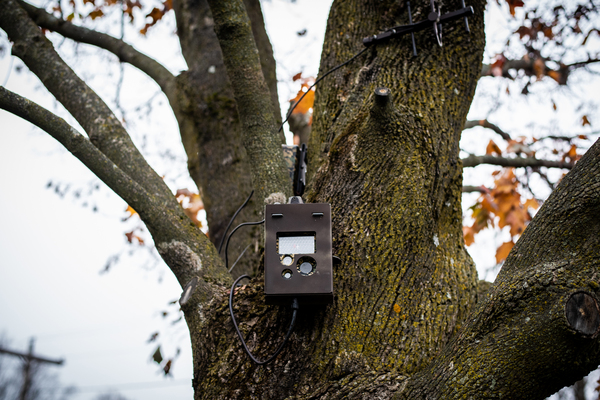 A motion triggered camera is mounted to a tree pointed toward a soft border crossing on the Haskell Free Library. Photo: Ian Thomas Jansen-Lonnquist for NPR

A new way of life

Fernando Beltrán, the retired Border Patrol agent in charge at the nearby Newport, Vt., station, points out this is a smuggling route used to move potent, hydroponically-grown Canadian cannabis across this border. CBP seized more than two tons of marijuana this year — a 362% increase over 2017 seizures.

"Like, if I bring a bag of cookies to you, how does a guy at the port that sees it on camera know that the bag was just cookies?" Beltrán says. "People here used to say, 'well, we were always on the honor system.' That's just not the way of life anymore."

The fact is, illegal activity is increasing here in the northeastern corner of Vermont.

In 2017, CBP agents caught 165 immigrants; this year they took 822 people into custody. Agents call them P-WACs — People Without Admission from Canada. 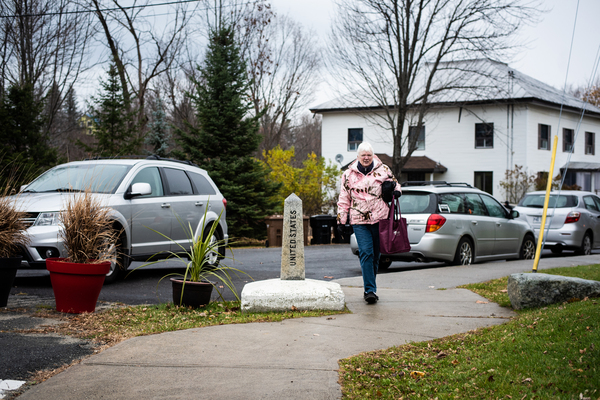 Ann Kasowski, of Stanstead, Quebec, crosses into the United States from Canada to enter the Haskell Free Library and Opera House. Kasowski said she lives four houses from the border.
Photo: Ian Thomas Jansen-Lonnquist for NPR

With Trump's clampdown on the southern border, more migrants are discovering the northern route.

"They're feeling a lot more pressure than they ever have down south, and they found loopholes to exploit via Canada," says Richard Ross, the current patrol agent in charge of the Newport Station. "It definitely has an effect on what we see up here."

Many illegal crossers are Mexicans and Romanians, who are among the nationalities that don't require a visa to travel to Canada. It's much simpler than swimming the Rio Grande and trekking through sweltering Texas ranchland. They go online to request an Electronic Travel Authorization from Canada, fly to Toronto or Montreal, and pay a smuggler to show them where to cross. 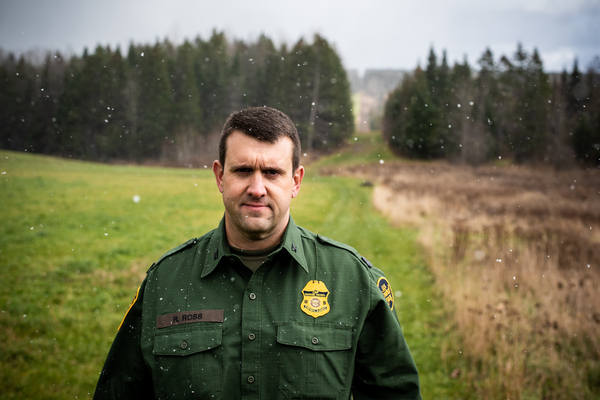 Richard Ross, patrol agent in charge of the United States Border Patrol's Newport Station, stands near the international boundary, marked by the slash in the forest, as snow falls.
Photo: Ian Thomas Jansen-Lonnquist for NPR

"We're the first land border east of the Great Lakes," Ross says. "There are several major interstates that run to points south, either New York City, Boston, all the way down to Washington, D.C. It's very easy to be in the country and down the road in short order."

Ross drives along a road that parallels the border, pointing out the open areas where people cross illegally amid the dairy farms, hay fields and maple groves. Without a 30-foot-tall border wall or a heavy deployment of agents, the Border Patrol up here depends on ground sensors and game cameras.

Of course, the numbers are a drop in the bucket compared to the southern border. Last May, a single group of more than 1,000 people crossed into El Paso. Yet, 822 apprehensions in a year are significant by the standards of the sleepy northern divide.

Even the public library has gotten dragged into border intrigue. 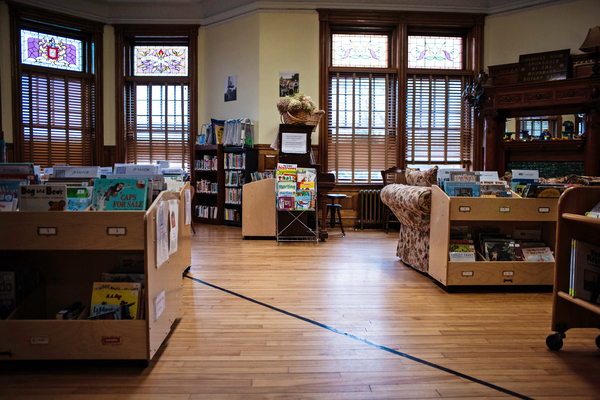 The Haskell Free Library has a piece of black tape along the floor marking the international boundary. Photo: Ian Thomas Jansen-Lonnquist for NPR

The Haskell Free Library actually straddles the international boundary — the children's section is in Vermont, and the rest of the stacks are in Quebec. The stately old edifice opened more than a century ago when both towns were one close-knit community. But these days, the librarians have to keep an eye out for more than noisy patrons.

"It's even been used to smuggle, because you can go in and out of the Haskell without checking in at either customs," says Scott Wheeler, standing outside the library.

Last year, a Montreal man was sentenced to prison for stashing a backpack full of handguns in the library bathroom, for an accomplice to pick up and spirit into the U.S.

Moreover, Iranian families from Canada and the U.S., prevented from going back and forth by Trump's travel ban, had been using the library's reading room for emotional family reunions. A green and white Border Patrol vehicle now parks outside the library.

"The library staff has to keep a sharp eye on who comes and goes," Wheeler says.

To read the original article, hear an audio report of this story, and read related reporting, follow this link to the MPR News website.  https://www.mprnews.org/story/2019/11/21/npr-u-s-canada-border-communitys-culture-changes-as-securit...